The Goodyear Wingfoots, General Electrics, and the heyday of industrial basketball


When fans and corporate heavy hitters gather this weekend in Cleveland for NBA All-Star weekend, they will celebrate the game’s seventy-fifth anniversary with a roster of all-stars from the league’s history. But the origins of pro basketball go back further than that, and they’re woven into the Rust Belt’s industrial heritage.

Before the NBA—even before the two leagues that became the NBA—there was the Midwest Basketball Conference, a league of teams that essentially sprang up as marketing opportunities. GE sponsored a namesake team (the General Electrics) in Fort Wayne, Indiana. And Akron had two basketball teams, each sponsored by one of the city’s tire companies: The Firestone Non-Skids and the Goodyear Wingfoots. Business owners sponsored teams to get their names publicized; an auto dealer named Ed Ciesar sponsored a team called the All-Americans, first in his hometown of Whiting, Indiana, then in Hammond (among the players was a young Hoosier and Purdue graduate named John Wooden).

In 1937, GE, Firestone, and Goodyear started the National Basketball League, adding teams throughout the Great Lakes region. It began as a confederation of company teams, initially used to keep workers at mills and factories in shape. Many of the teams had names reflecting their industrial heritage. Chicago had the Studebaker Flyers, sponsored by the United Auto Workers. Toledo had the Jim White Chevrolets, named for an auto dealer chain. And after the General Electrics went back to amateur status, Fred Zollner sponsored a team in Fort Wayne named for his best-selling product: Pistons. 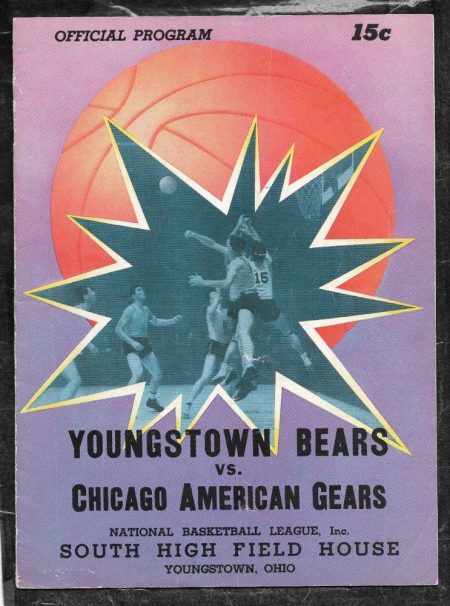 Program from an NBL game featuring the Youngstown Bears and Chicago American Gears.

“The companies usually employed the players,” basketball researcher Bob Bellotti told me. “And that was in some cases how they were able to get these players, telling them they could get jobs.” Murray Nelson, professor emeritus of education and American Studies at Penn State who’s written extensively about the game’s industrial roots, said this employment arrangement also shaped the geography of the teams: “The league was all close enough they could commute and play and not miss work.”

Following World War II, a rival league sprouted up: the Basketball Association of America. But while the NBL was centered in small cities throughout the Midwest, the new BAA was found in big cities. Operators of the major arenas in those cities—led by Walter Brown, who managed the Boston Garden—wanted to fill dates in the arenas, which were usually home to hockey teams as well. “Basketball was far less popular than hockey, but it was a wonderful thing to keep money flowing and maybe generate more interest for basketball,” Nelson told me.

The BAA’s founding in 1946 is the date the NBA considers its founding—but just three years later, it merged with the NBL to form the NBA. And while the NBL teams formed the bedrock of the NBA, a lot of the industrial Great Lakes cities, like their flagship industries, were left behind. “Basically, the league decided it doesn’t want to be in these smaller cities anymore, and it started gravitating south and west,” says Curtis Harris, an adjunct professor at American University in Washington D.C. and a pro basketball historian. “They were left behind, quite deliberately in some cases. Some franchises just went broke.” The industrial teams left in the cold—including the Wingfoots, the General Electrics, and the Peoria Caterpillars—started their own amateur league, the National Industrial Basketball League (NIBL).

The leagues before World War II—like many of the workplaces that sponsored them—were still almost entirely white. That changed with the onset of the war. In the 1942-43 season, both the Jim White Chevrolets and the Chicago Studebakers fielded black players. In fact, the Studebakers had a majority black lineup. “It wasn’t orchestrated,” Harris says. “It was just, ‘hey, it’s World War II and we lost a lot of talent to the draft.’ There were no high-minded principles at play.”

In the 1950s and 1960s, the NBA continued its push to bigger cities. Zollner relocated the Pistons from Fort Wayne to Detroit in 1957. In 1963, the Warriors moved to San Francisco, and the Syracuse Nationals took their place in Philadelphia and became the 76ers. The Tri-Cities Blackhawks, in Moline, Illinois, went first to Milwaukee as the Hawks, then to St. Louis, and finally, in 1968, to their current home, Atlanta. The Rochester Royals moved to Cincinnati in 1957, and later to Kansas City—where they were renamed the Kings to avoid confusion with the baseball team—and then to Sacramento in 1985. “The NBA had this air that it was a major league before it was actually ready to be a major league,” he says. “Eventually, even cities like St. Louis and Cincinnati got to be too small.”

But in a lot of ways, the NBA remained small time. For many teams, their biggest draws were scheduling doubleheaders with the Harlem Globetrotters. Abe Saperstein—who owned the Globetrotters—was ready to take an NBA expansion team in Chicago, but wasn’t able to make it happen. Instead, he started a rival league, turning the NIBL into the American Basketball League in 1961. The ABL introduced George Steinbrenner to the world as a sports owner. Steinbrenner owned the Cleveland Pipers, and was on the verge of having the team join the NBA. But the deal fell apart at the last minute, and the ABL, mortally wounded, didn’t survive, going under at the end of 1962.

“The money in the NBA then was a joke,” says Ed McKee, who graduated from Rockhurst University in 1967, and was drafted by the Indiana Pacers, then an American Basketball Association team. McKee couldn’t catch on with the Pacers or the Kentucky Colonels, another ABA team, so he went to work for Goodyear—and played two seasons for the Wingfoots in the industrial league. He had two teammates who’d played on the U.S. team in the 1968 Olympics, and three of them, including future coaching legend Larry Brown, had played on the 1964 team.

“There were players in the industrial league who could have played in the NBA or ABA,” McKee told me. But those players saw stability in a job at Goodyear, and there was no prestige at that point in the NBA; it really wouldn’t be until the 1980s that the major league found its footing. By then, it had been decades since the ABL, the last gasp of the industrial leagues. Abe Saperstein was dead, and George Steinbrenner had moved on to baseball – and New York City. But the ABL’s influence was profound, first instituting the three-point shot and a wider lane under the basket – both changes adopted by the NBA and both significant changes to the game itself. “It’s long forgotten,” Nelson told me of the league that had its roots in Rust Belt industry. “But it did so much.” ■