Put a Smokestack On It: Lansing’s 517 Shirts

Ty Forquer got the idea for 517 Shirts in the men’s room of a Lansing, Mich., bar. Forquer had just moved to Lansing from Portland, Ore., to pursue a doctorate in music at Michigan State University. Inspired by Portland’s quirky entrepreneurial cottage industries (exemplified by Portlandia’s “Put A Bird On It” skit, he and his wife Rose were trying to think up their own business. 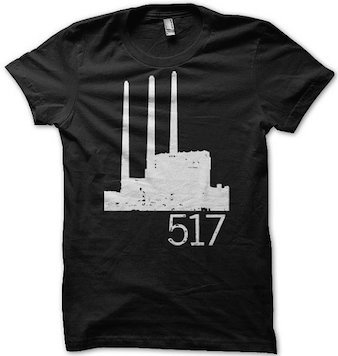 Then Forquer saw a primitive graffito on the bathroom wall: three long, thin parallel lines, sketched in black Sharpie. He recognized it instantly: the 615-foot-tall chimneys of the Otto E. Eckert Station, a coal-burning power plant. Lansing’s Triple Towers. Known locally as Wynken, Blynken, and Nod, the smokestacks are a civic symbol visible beyond the city limits. That, Forquer thought, would look great on a T-shirt.

Forquer PhotoShopped a silhouette of the plant, and put the numbers 517 – Lansing’s area code – underneath. He printed up 50 shirts. Area code callouts are a common shorthand for cities, so he thought the design would appeal to locals without looking like a message from the tourism bureau.

“The smokestacks are an obvious Lansing design, so it’s an inside joke,” he says. “I never wanted my shirts to be for tourists. They’re Lansing shirts, but I want them to be cool shirts that stand alone as well. Someone from the West Coast wouldn’t be able to place that.”

[blocktext align=”right”]“We really fell in love with the potential of Lansing.”[/blocktext] More designs followed: a map of Michigan and the Great Lakes with the legend “(great)”. A vertical “LEFT,” with arrows pointing in two directions, a reference to the “Michigan Left”, a notorious traffic maneuver requiring drivers to turn right, then make a u-turn. The winged logo of the REO Motor Car Co., which Lansing businessman Ransom E. Olds founded after selling his Oldsmobile line to General Motors. That last one offers Lansingites an opportunity to share a teachable moment with classic rock fans, who associate the name and the design with the band REO Speedwagon. (The Speed Wagon was a proto-pickup truck. Keyboard player Neal Doughty saw the name on a blackboard in a History of Transportation class at the University of Illinois.) REO Speedwagon started playing Lansing in their bar band days, and were hugely popular in mid-Michigan. (I saw them at Michigan State University’s Jenison Field House, on the 1982 Hi Infidelity tour.) But … the company’s name was pronounced as a single word – “Reo,” not “R-E-O.” The REO Motor Car Co. went out of business in 1975, after which its plant burned down in a Sherman-visits-Atlanta-level fire that people talk about to this day. REO Speedwagon, meanwhile, is still playing Midwestern college campuses, casinos, and county fairs, spreading mispronunciation.

Forquer, 33, grew up in Mount Pleasant, 60 miles north of Lansing, and attended Central Michigan University, his hometown college. A percussionist, he moved to Portland to earn a master’s degree in music in 2005. Michigan to Portland is a one-way journey for a lot of twentysomethings. But after two years, he decided to come home. While in Portland, he had married his college girlfriend, and they both felt “really strange” being so far away from their families. At first, moving from America’s Hippest City to a blue-collar state capital of 113,000 people felt like a step far down the cultural ladder.

“Coming from Portland, at first it was disappointing to leave this scene that had all this food, had all this art, had all this culture, to a place that wasn’t at the same level,” Forquer says. “There’s so much creativity out there. When you’re out in Portland, you feel that if you have the business opportunity, you can find the people to support it.” 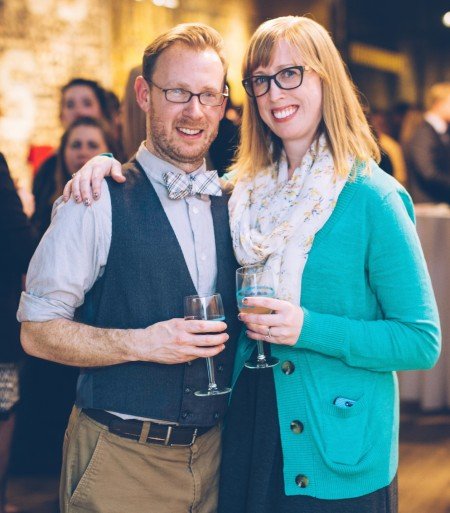 Soon, though, Forquer discovered he had more opportunity to be creative in Lansing, because there was less competition – “there’s so much space where you can really stand out.” He also discovered other creative entrepreneurs in Lansing, such as the impresarios of Fusion Shows, which brought Macklemore to town before he hit it big, and the owners of Meat, an Old Town barbecue joint. Forquer plays drums in Wisaal, a Mediterranean jazz fusion band that gigs around the state.

After working for several years as an adjunct music teacher at local colleges, Forquer took a full-time job as the arts and culture editor of City Pulse, Lansing’s alternative weekly newspaper. He and Rose bought a four-bedroom house in the shadow of the smokestacks for $70,000, and want to settle down in Lansing.

“We really fell in love with the potential of Lansing,” Forquer says. Detroit may be the current hot destination for artists attracted to the Rust Belt, but Forquer believes “the artists who are working in Lansing seem to have a little more grit, a little more blue collar. Detroit’s gotten a lot of transplants from New York, with this romantic idea of artists working in this post-industrial space. Lansing feels a little more homegrown. It’s not on a lot of people’s radar.”

Edward McClelland is the author of Nothin’ but Blue Skies: The Heyday, Hard Times and Hopes of America’s Industrial Heartland.