In late March, novelist Marilynne Robinson caused a stir after a reading when she casually let slip that she was working on a fourth novel set in the fictional town of Gilead, Iowa. “People should be prepared to say quartet instead of trilogy,” she told an audience at Columbia University, to rousing cheers.

Why so excited? Of course, Robinson is among America’s finest novelists, and the broad themes of her writing — faith, home, community — have wide appeal, especially for readers who recognize her as one of the few non-didactic writers on those subjects. Robinson has bridged stereotypically red-state and blue-state values without seeming to compromise either; her prose conveys patience, care, and consideration in a society sorely lacking in all of those things. “She evokes the hope of heaven in the everyday, and the promise of baptismal blessing in ordinary water,” as Briallen Hopper wrote in a recent critical essay on Robinson’s work.

[blocktext align=”right”]We’ve been projecting our complex feelings about God, conformity, and Middle America onto Iowa for a while now. A couple of science fiction novels that predate them suggest just how flexible and provocative the theme can be.[/blocktext]Thing is, Robinson hasn’t just been sending us to Iowa and dunking us in sacred streams. If religious comfort is what we’re looking for, cozy devotionals abound. Part of the appeal of Gilead, Home, and Lila for many, I suspect, is how they undo our received notions about religion and the Midwest. This isn’t the place to get into the details of that, since what I really want to talk about are space aliens and police states. But the strength of the Gilead novels is the way they decouple faith from clichés about faith. There’s a hint that that’s what many of Robinson’ readers hunger for in a question one audience member had for Robinson after her announcement: Would the book feature Jack Boughton, the complicated prodigal son of the earlier novels? Robinson replied that she got that a lot.

Robinson and Jane Smiley have spent their careers weaving transgression into the seeming calm of the Iowa cornfields. But we’ve been projecting our complex feelings about God, conformity, and Middle America onto Iowa for a while now. A couple of science fiction novels that predate them suggest just how flexible and provocative the theme can be.

In 1951, Robert A. Heinlein published The Puppet Masters, a lively, pulpy allegory on groupthink and political manipulation. Aliens have arrived on Earth eager to attach themselves, barnacle-like, to the backs of unwitting humans, and they’ve landed in what is apparently the easiest place for them to take over: Grinnell, Iowa. Soon the state is a “pest house of slugs” that quickly spreads through the nation’s center, and Federal agents Sam and Mary are charged with eradicating them. (The first hint that these zombie Iowans are no longer red-blooded Americans is that they’ve resisted Mary’s feminine wiles: “Something was wrong with them. They were dead inside. Harem guards, if you know what I mean.”) 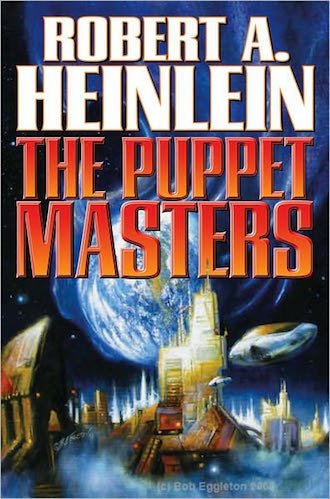 Heinlein has his share of fun throughout the novel riffing on Iowa’s blandness. (“There was no news from Iowa, but when is there any news from Iowa?”) But less overtly, The Puppet Masters argues that Iowa — and much of the Midwest — is a place where appearances are deceptive. Kansas City, in this post-World War III future, has a “gamy reputation” despite outward appearances that make it “feel like an enclave of security, impregnable, untouchable.” Iowa, meanwhile, responds to a government edict that citizens strip to the waist by sending out fake TV footage that all is well. Beneath those genial exteriors is a malevolence — or, perhaps more precisely, Heinlein suggests that the Iowan geniality is easy for malevolent forces to exploit.

But The Puppet Masters isn’t about Iowa so much as it’s about Iowa as a placeholder for a country’s Cold War fears. As Heinlein himself put it, the novel is a “thinly disguised allegory, a diatribe against totalitarianism in all its forms.” A more sophisticated treatment appeared a couple of decades later, in Thomas M. Disch’s 1979 novel On Wings of Song, a science fiction novel that’s also a fine coming-of-age novel as well, and with enough digressions into matters of faith that it’s Robinson-esque in its own way.

The novel’s premise at first rains some Heinleinesque contempt upon the state where Disch grew up. Growing up in Amesville, teenaged Daniel dreams of being able to fly under his own power, which some (like his mother) are able to do by singing. But in this dystopian future the Iowa government can barely tolerate music, and flying is banned outright — “people were concerned about it as part of Iowa’s general decline,” as Daniel explains. Eager to escape the “undergoders” in charge, he makes a trip to more liberal Minneapolis and starts exploring. But when he starts delivering copies of the Star-Tribune back home he’s sent to prison for a year, where among his jobs is processing “a specially mutated form of termite that was used as a supplement in various extended meat and cheese products.” 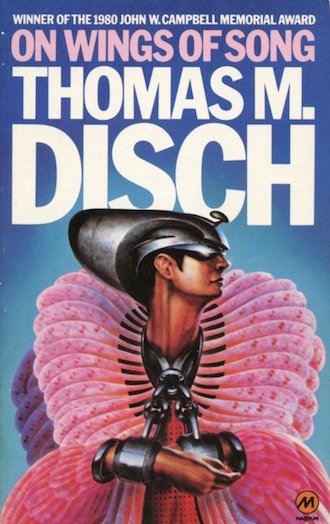 Clearly, the only thing a smart and ambitious young man ought to be doing in Iowa is getting the hell out of Iowa — something he eventually does alongside his girlfriend, Boadicea (unsubtly named for a first-century rebel against the Roman Empire). But after Daniel settles into New York in the second half of the novel, it’s also clear that Disch is balancing a ledger of sorts. On Wings of Song dramatizes a conflict of regional sensibilities: the repressive but prosperous heartland against the liberated but miserable city, where “disaster was a way of life.” Daniel insinuates himself into New York’s society of bel canto — the height of culture among the upper crust — but he’s not quite capable of achieving liftoff himself. He gets by as a songwriter, ultimately writing a musical that makes a hash of the Christmas story.

That musical hints at Daniel’s solution to his dilemma: borrow a bit from each column, taking on heartland faith but blending it with irreverent coastal secularism. His bible for this mission is a text he discovered in prison by one Reverend Van Dyke, who in a book called The Product Is God proffers a kind of fake-it-till-you-make-it philosophy: “If the way we become the kind of people we are is by pretending, then the way to become good, devout, and faithful Christians (which, admit it, is a well-nigh impossible undertaking) is to pretend to be good, devout, and faithful.”

Disch, who died in 2008, was an atheist, and his treatment of Van Dyke-ism is mostly satirical — without giving too much away, Iowa ultimately claims its primacy over this semi-sincere theology. But it also doesn’t give too much away to say that this thinking gives Daniel wings. (Daniel clings sincerely to a line of Kierkegaard’s: “purity of heart is to will one thing.”) Heartland Christianity isn’t the problem so much as the calcified brand of it pushed by the “undergoders.” Disch was cynical about his homeland, but he also understood its complexity. He embodied it in the epigram of the novel, embracing holy inspiration and challenging it: Profiscicere, anima Christiana, de hoc mundo. Go forth, Christian soul, from the world.

Mark Athitakis has written on books for many publications. He lives in Phoenix but grew up in Chicago. His Reading the Midwest column appears monthly in Belt.