The drive from Lansing to Flint is relatively easy, a straight shot along I-69. It’s a drive I first made in August 2008 after accepting a teaching job at the University of Michigan-Flint. It’s a drive I continue to make three to four days a week for classes and meetings. It’s likely the same drive once made daily by Jerry Ambrose, who lives in nearby Mason and was fourth in a succession of emergency managers for the city of Flint.

Our degrees of influence in Flint are very different, though, and while his time in the city is over, mine is still beginning. To some degree, I am dealing with the ramifications of his and every other emergency manager’s decisions. It isn’t a responsibility I’m happy about, but it is one that I accept.

I imagine our understandings of Flint to be quite different, too. As a university professor, I am largely not tasked with cost-cutting measures, at least not yet. And because of my background and training in rhetoric and technical communication, I might care more than an emergency manager about the words we use to communicate ideas. I’m also interested in how certain terms, mentioned and unmentioned, skew our perspective of events. 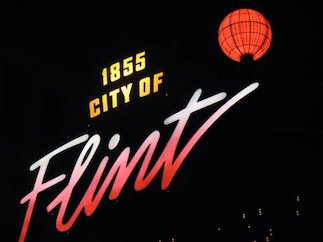 For instance, did you notice how quick Governor Snyder was to concede and the media to report that Flint is his “Katrina,” a term so established in certain circles that the quotation marks might not even be necessary. And how quick we were to forget this admission, coached as it appeared, with impending stories of celebrity donations and which political party was most to blame.

That the governor seemed ready to concede responsibility for Flint in such a way should be revealing. The concession itself can be seen as a small thing, particularly when compared to criminal charges or his resignation, neither of which appear likely anyway.

But for the governor to acknowledge what’s happening in Flint as his “Katrina” is a kind of erasure, too, a silencing. It is to give the crisis an unwarranted air of inevitability. It is to allow celebrities to respond in kind, with provocative tweets and plastic bottles of water. It is to collapse multiple failures, just two being the state’s oversight of the switch and its much-delayed response to the ensuing crisis. It is to invite upon city residents the same unfair, uninformed criticisms and questions leveled at those who were in New Orleans when the levees broke. It is to give greater weight to the short-term address of what are more systemic problems. It is to blame the environment, which we continue to pollute, for harming and killing us.

[blocktext align=”right”]When I asked one class of 24 first-year students if we should take some time to talk about the Flint water crisis, I thought we might spend a single 75-minute session doing so. But they had so many concerns and questions about every aspect of it…that we decided to make the crisis our focus for the rest of the semester.[/blocktext]Besides, such a concession was unnecessary anyway. Flint functions as its own shorthand. Flint is the liberal’s broken promise. Flint is the conservative’s waking nightmare. Flint has commonplaces and invectives so common as to be litanies murmured in reverential unity with others of our political persuasion.

But I work with students from Flint and the surrounding area, and they are as eager and interested as any college student. When I asked one class of 24 first-year students if we should take some time to talk about the Flint water crisis, I thought we might spend a single 75-minute session doing so. But they had so many concerns and questions about every aspect of it, from health and history to infrastructure and policy, that we decided to make the crisis our focus for the rest of the semester.

For many of my students, the Flint water crisis is more local and relevant than anything else right now. Perhaps for the foreseeable future, too. So, to take the next ten weeks to help them understand the crisis, to guide them in expressing their own thoughts and feelings about it, is something I’m grateful to do.

Doing this is more than anyone with the power to either prevent or respond to the crisis with even a sliver of adequacy has bothered to do. And again, given circumstances, it is not a responsibility I am happy about, but it is one that I accept. To be honest, it is one of the few things I accept about what’s happening in Flint these days.

James Schirmer is an associate professor of English at the University of Michigan-Flint. Find him on Twitter at @betajames.