It’s only 6 p.m. on a Wednesday in the Appalachian hideaway of Glouster, Ohio, but the village’s downtown is already fast asleep. A handful of underdressed youngsters huddle with their hands in their pockets, pacing in small circles to fight the chill of an unseasonably cold night. They’re standing under a sign that reads “Sam’s Gym.” Unlike many kids in humdrum towns who aimlessly gather around the nearest storefront looking for any stray drop of excitement, these kids aren’t loiterers. They’re waiting for Sam Jones, who arrives a few minutes late and fumbles with his keys as he opens the door to the boxing gym his father first opened nearly 80 years ago. The last one in, Jones closes the door behind him. It’s the only time the lifelong resident ever turns his back on the struggling coal mining town.

“I don’t think there would be a community without Sam Jones,” Shaun North, a local fight promoter who frequents Sam’s Gym, says. “This gym is the beating heart of Glouster because there is nothing else positive that the kids can focus on.” 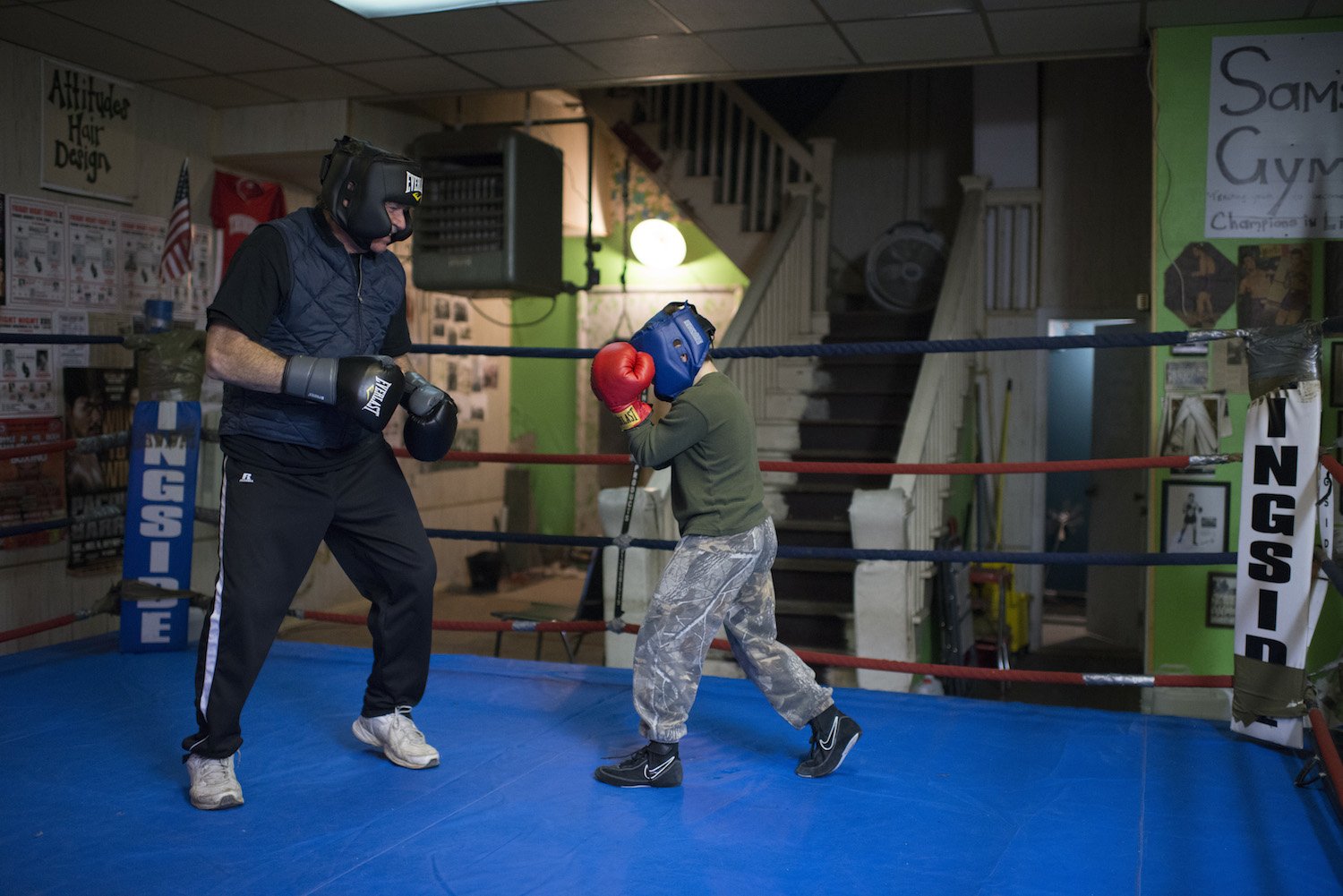 Since 1985, Jones has opened the doors of his gym twice a week for local children in hopes of keeping them away from drugs and crime. Sitting on the gym’s front desk is an almost empty jar where members are asked to donate two dollars for every visit. Even with an entry fee so low, Jones never turns a child away and fronts most of the overhead himself. At the tail end of 72, Jones still moves around the gym at the pace of men half his age. Clad in sweatpants and a windbreaker, Jones is prepared to give as much effort as the fighters he trains. While in the ring, he focuses on the action in near silence, occasionally correcting a boxer’s stance or jab combination. While everyone warms up, Jones shows me around, speaking a mile-a-minute in his charming Appalachian drawl as he chronicles the gym’s history, as well as the history of Athens County.

“When you step in here, it’s like you’re walking back 60 or 70 years,” Jones says. “It’s not like any modern gym you walk into. There’s nothing fancy here.”

True to his word, Sam’s Gym serves as part time capsule, part museum, and part bare-bones boxing club. Most of the equipment is decades old. The only modern piece of technology is Jones’ stereo, which pumps out a playlist of clichéd jock jams, leading off with, of course, Survivor’s “Eye of the Tiger.” Nearly every inch of wall space is cluttered with pictures, plaques, and banners from matches that date back to the 1800s. Taking his time to describe each piece of memorabilia, Jones shines a light on area history often overlooked even by the locals. He tells me about the Millfield Mine disaster that killed 82 men in 1930, the exhibition baseball game in Nelsonville in which Babe Ruth played alongside Jones’ uncle, and the days when Glouster thrived, thanks to the mining boom of the early twentieth century.

“You didn’t have to leave town for anything,” Jones says. “It was a bustling little community with doctors and attorneys, but that’s all gone now.”

Perhaps just as illustrious as the hidden history of Southeast Ohio is the history of Jones himself, whose family ties to Glouster date back to the Civil War, when his great grandfather fought in the 63rd Ohio Infantry. Jones’ father started the gym in 1936 as a source of entertainment and escape from the long and soot-stained hours spent in the mineshaft. When Jones was hardly in grade school he was already training in his father’s gym, developing the skills that turned him into a kickboxing phenom in the years to come. A three-time U.S. heavyweight Bando kickboxing champ, his fighting career sent him to rings all across the world, including a nationally televised fight at Madison Square Garden in 1975 in front of a crowd of 20,000 where he was “booed coming in and booed coming out” as he faced off against Puerto Rico’s champion in front of a raucous partisan crowd.

After his memorable bout in New York, Jones returned to Glouster in 1975 and began focusing his energy on the success of younger fighters as a trainer. In his expansive coaching career, Jones has launched countless fighters to national and world titles and has rubbed elbows with the sport’s elite. During my tour of the gym, Jones name drops legendary boxers like Clive Davis would with Grammy-winning musicians. George Foreman, Joe Frazier, Oscar De La Hoya, and Mike Tyson all shared the ring with Jones’ fighters. He even recalls training Andrea DeShong, a female fighter who fought an undercard bout on the night Tyson bit off a piece of Evander Holyfield’s ear in 1997.

Shadowboxing in a mirror is one of Jones’ protégés, a 23-year-old lightweight named James Robinson. Robinson has been coming in and out of Sam’s Gym since he was eight years old. The second generation to fight under Jones’ watch, Robinson sees Jones as family. On his left arm is a tattoo with Jones’ name written above a pair of boxing gloves along with the names of Robinson’s father and son. Facing a narrow path to the pros, Robinson says much of his success comes from the calm guidance he receives from his corner.

“When your coach is yelling at you, it’s hard to pick out his voice from the rest of the crowd,” Robinson says. “Coach talks right out to you, real soft and smooth. It’s just loud enough to hear, and that’s what breaks him out of the crowd.”

Jones’ competitive edge comes not only from his relaxed temperaments during fights, but also from the personal care he gives each fighter. When his fighter gets off the stool to start the next round, Jones slides his arms under theirs, lifting them up to preserve a bit of energy. He shows me this and all the other sneaky methods trainers use to buy time in the ring, such as intentionally rubbing too much Vaseline on the fighter’s eye so that referee will send him or her back to the corner for Jones wipe it off, buying the fighter a few more seconds of rest. For Jones, this isn’t just strategy; trips to the cemetery to bury fighters make him such a cautious trainer.

“Too many times has there been a situation where two men walk into the ring, but only one leaves,” Jones says. “I can stop the fight and he can go home to his family, not the hospital. Or, I can really encourage him to get out with his chin all hung out and he’s dog tired, and that’s when you can get killed.” 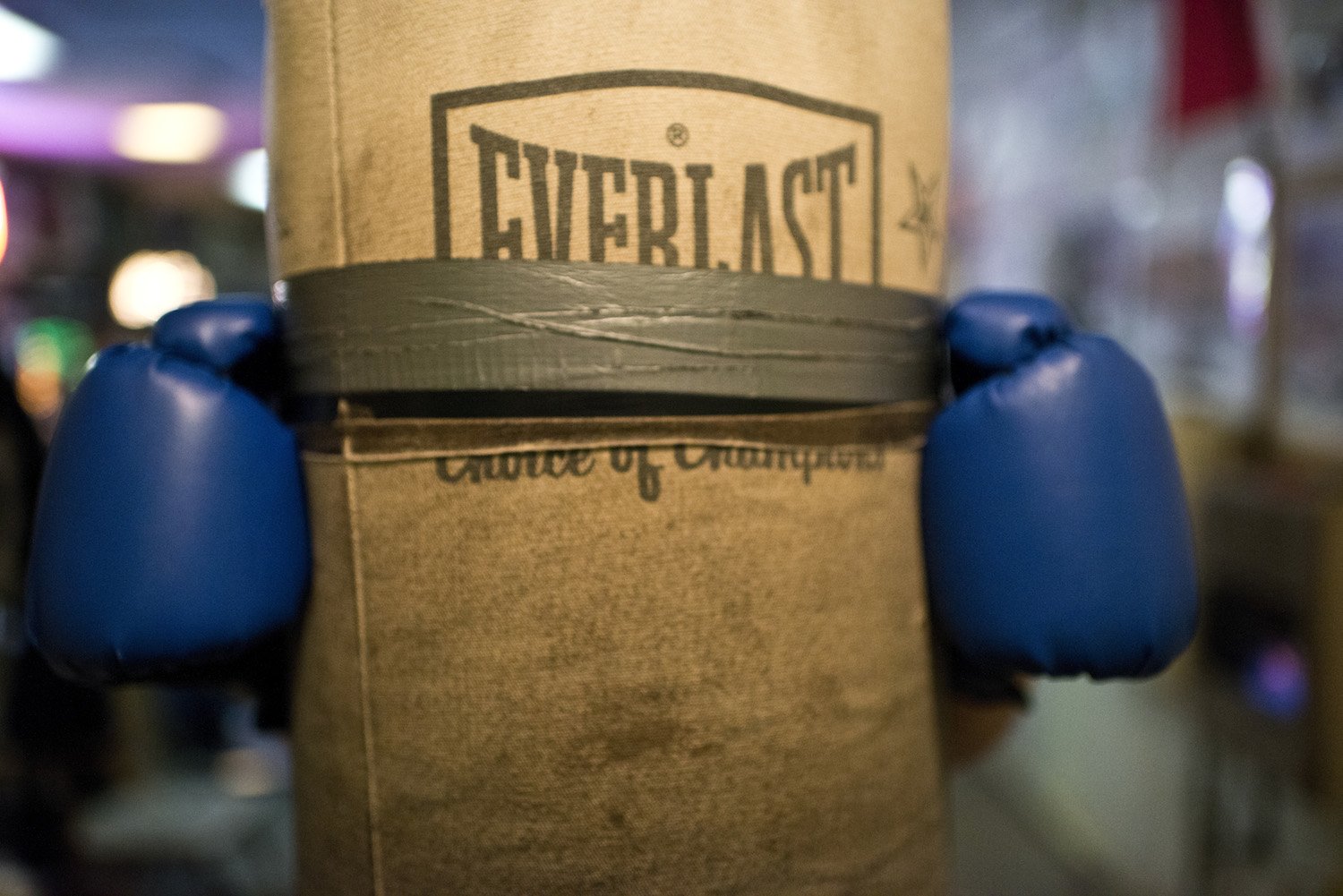 Following our talk, Robinson runs back to the mirror to continue training. He grunts with poise as he bobs and weaves, practicing various jab combinations. In the mirror’s reflection he can see pictures of his hometown hero, welterweight champion Brian Camechis. They are two of at least a thousand boys and girls who have sought refuge from the bleak realities of a town that shut down when the coal mines did, tanking the local economy. Deprived of mining salaries to support local taxes, Glouster and its neighboring towns make up one of the poorest school districts in Ohio. According to Jones, money has been so tight that old and worn textbooks are missing entire chapters. Jones and other concerned community members founded the Trimble Local Textbook Supplies Foundation to curb the problem, as well as an annual Boxing for Books fundraiser at Trimble High School. Despite the effort, Shaun North said he believes Jones alone might not be enough to save this ailing town.

“I just don’t know if he can do it all on his own,” North says. “He’s been able to keep things around here from getting worse, but it’s going to take so much more for things to really get better.”

No matter the size of the impact on the community at large, Jones wants the success of the kids who come into the gym to be his greatest accomplishment. Posted around the gym are signs that read, “Be a champion in life.” For Jones, this is the gym’s mission statement, and perhaps the best weapon he has in saving these kids from the vices and temptation that tag along with the small-town blues.

“You might lose your job or your family, and man, you’re down in the valley,” Jones said. “But you gotta get your butt off that canvas and keep going. You gotta be a productive citizen, respect mom and dad, and be a champion. That’s what we teach here.”

By 9 p.m., most of Jones’ fighters have gone home. Some of the adults stick around to swap stories.They pull out a couple of guitars from the back and play a few selections from the canon of rock and country. Jones sits down with his prized 1968 Gibson J-45 and croons the coal-country standard “Sixteen Tons.” The lyrics describe workers who loaded thousands of pounds of coal only to find themselves so far in debt that even heaven is out of reach for a miner who “sold my soul to the company store.” Even with the mines gone, those sixteen tons still weigh heavily on Glouster and on Jones. He will keep working to revive the town, even if it’s only one child at a time.

Andrew Poulsen is a writer from Akron, based in Athens, Ohio. He has contributed to Billboard and Billboard Biz.