Most car drivers don’t like me. I’m one of those people who rides a bicycle in the street, and over the years I’ve had cars swerve toward me, throw garbage, honk, shout nasty crap, and give me the finger when they ride by. But this doesn’t bug me too much. I know that most automobile drivers hate everyone on the road, and they would prefer that there was no one else but them driving around.

Now that we can agree that hatred of all things transportational is universal, I am going to give the bicycle-hating folks one more reason to hate me. I am one of those riders who sometimes runs red lights, and I go through stop signs without coming to a complete stop. I approach red lights and stop signs this way for two very good reasons: I am safer if I get through an intersection quickly, and I don’t block car traffic unnecessarily as well, if I move through in this manner.

Before you car drivers trot out the “I can’t do that, so you shouldn’t be able to either” argument, let me explain. Intersections are the most dangerous places for cars and bicycle riders. Cars can see you when you are in front of them and moving, but they seem to have a harder time when you are stopped next to them. When a car comes to an intersection and is turning right, they often don’t see me if I am stopped at the curb in the right lane. 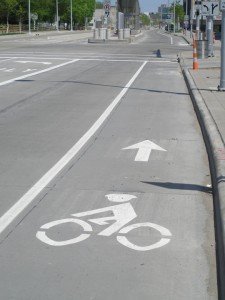 Likewise, if an intersection has a right-turn lane, I am blocking that lane if I am going straight through and taking my place by the curb. If I get in the lane that is dedicated to thru traffic, I am going to be blocking that traffic as I get up and moving again through the intersection. It is a basic fact that my zero-to-15-mph time is not as good as a car’s.

Stop-sign intersections are similarly problematic. If I come to a complete stop, cars will be backed up behind me as I get moving. Better to approach these intersections as if there were a yield sign, slowing down as you approach, looking both ways, and getting out of the way as fast as possible.

I don’t approach every intersection the same way, nor do I ride through without slowing down and assessing traffic. At some big intersections — a six-lane road meeting up with a freeway interchange, for example — I stay back about six car lengths and let everyone get moving ahead of me before I get moving. But at less busy intersections, it is best for me to move through quickly.

These distinctions between bikes and cars in intersections — where cyclists approach red lights as stop signs and stop signs as yields — became law in Idaho in 1982. The story is some cycling advocates slipped it through in a bill, but over time residents found that the change improves safety a bit for cars and bicycle riders, and moves traffic better.

But no other states have followed suit in all those years, mainly because car drivers get very upset when they see bike riders on the road getting what drivers perceive as preferential treatment. But I look at it this way: Urban traffic laws and road design are based upon 4,000 pounds of metal and glass moving along at 35 mph, and not 35 pounds moving through at 10 mph. If you let me on the road with a two-wheeled, slower vehicle, it makes sense to tweak the road rules to make it safer and more efficient for cars and bicycles to share the road. We should have slightly different rules to follow because we are different types of vehicles.

For instance: In my neighborhood in Lakewood, Ohio, there are numerous intersections I ride through almost daily that have embedded sensors in the road that activate the traffic lights. I treat red lights at these intersections as stop signs, because I am not going to wait for a car to drive up to turn the light from red to green. Am I breaking the law by going through? Absolutely. But I think common sense here overrides a strict interpretation of the law. 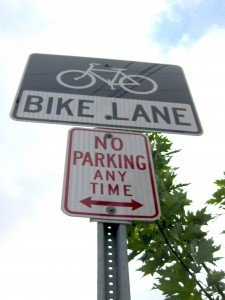 That is what drivers have to get through their head when looking at cyclists on “their” roads. No cyclists blow through an intersection without assessing whether they can make it through or not safely, and if there was a such a problem of cyclists running red lights with disregard for all other traffic at the intersections, we would see a bunch of major accidents. Yet many drivers see the major issue with cyclists that they don’t follow the law. And it is all based on the “I can’t do that” argument.

But in admitting I don’t follow the law on all occasions, I am not disregarding the law so I can get to some place faster. I am doing it because I have been hit by cars making a right turn at intersections while I am waiting for the light to change, and because I’ve slowed traffic unnecessarily by coming to a complete stop at a stop sign. And there are times where I’ve pushed cars through an intersection in front of me because that is the safest way at that time and that place. That’s not following the literal interpretation of the law either.

Maybe we can get these things moving along. I want to get through the intersections quicker and safer, I want to get out of the cars way when I can, and I will break down and pay a fee to do it. Two bucks is about right. Happy trails.