Hard times, as Charles Dickens acknowledged in the title of one of his most politically pointed novels, are good for literature. The Great Recession has drawn the literary world’s attention to the Rust Belt, just as the Great Depression drew its attention to the Dust Bowl, because the rest of America is finally going through the same economic distress we’ve been experiencing since the 1970s.

Consider the success of Bonnie Jo Campbell. Until the late 2000s, Campbell was a small-press, lit-mag fiction writer from Kalamazoo, Mich. Her first novel, Q Road, received negligible attention, and her short-story collection, American Salvage, was published by Wayne State University Press. Campbell may be the inventor of Northern Gothic, a literary movement that captures the spirit of post-recession America. Her stories precisely limn the lives of those left adrift economically. (Although, to be honest, some of her meth-smoking rustics would have had it tough even in the best of times. Like the factory worker who sets himself on fire by dropping a cigarette in his lap during a traffic stop. Or the ex-con who beats and robs a salvage yard owner so he and his girlfriend can shoot meth before sex.)

American Salvage was a finalist for the National Book Award in 2009. W.W. Norton bought the paperback rights, and published Campbell’s next book, Once Upon a River, the story of a backwoods girl who survives with a rifle and her knowledge of the seasons, the river’s course and the desires of men. As critic Jeff Martin wrote on Salon, “Campbell’s first two books, while equally gritty as hell, never caught on; she didn’t change, the world did.”

[blocktext align=”left”]“It had been an intricate system and when the mills shut down, the entire Valley had collapsed,” he wrote. “Steel had been the heart. He wondered how long it would be before it all rusted away to nothing and the Valley returned to a primitive state. Only the stone would last.”[/blocktext]Since it captures the human side of deindustrialization so well, American Salvage is an excellent companion piece to Phillip Meyer’s American Rust, which provides a big picture of the Midwest’s industrial decline. I prefer to think of American Rust not as a novel, but a landscape painting in words. Meyer’s melodramatic story—about two young dead-enders whose lives are changed by a fatal encounter with a homeless man in an abandoned factory—is unconvincing. So are his characters, especially Isaac, a fragile would-be philosopher. But Meyer poetically describes what’s left behind in western Pennsylvania after the steel mills shut down.

“It had been an intricate system and when the mills shut down, the entire Valley had collapsed,” he wrote. “Steel had been the heart. He wondered how long it would be before it all rusted away to nothing and the Valley returned to a primitive state. Only the stone would last.”

Think of it as a grand canvas whose human figures are overwhelmed by their surroundings.

Detroit writers have also found themselves more marketable since their hometown, and its auto industry, went bankrupt. Like New Orleans or Memphis, Detroit has traditionally been better known for its musical innovations than its literary output.

The first documentation of Detroit’s post-riot decay was Devil’s Night and Other True Tales of Detroit, by Ze’ev Chafets, which took its title from the night-before-Halloween tradition of burning down abandoned houses. Chafets’s book, which is now out of print, came out in 1990—20 years too early. Paul Clemens’s Made in Detroit: A South of Eight Mile Memoir came out in 2005, and its tales of growing up white and Catholic in Detroit, as well as its title, are a nod to Eminem, the city’s greatest poet. (Also ahead of its time was Dean Bakopoulos’s Please Don’t Come Back From the Moon, which foresaw the “mancession” that began tearing apart families during the recession. In the early 1990s, fathers laid off from factories in the fictional Detroit suburb of Maple Rock began abandoning their families for “the moon.” Bakopoulos brought magical realism to the Rust Belt as he told the story of Michael Smolij, who grows to manhood without a father and faces a lesser financial future as a mall employee, while trying to resist the pull of the moon once he starts a family.) 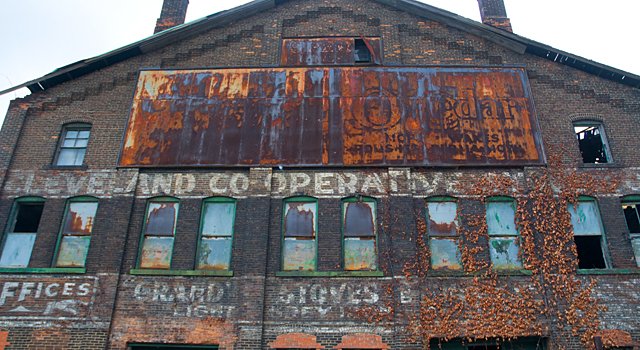 Detroit’s Roman decay has drawn filmmakers, photographers and journalists from all over the world. Rotting less noticed on Lake Erie’s other shore is Cleveland, as unromantic as a worn-out strip mall, with a literary culture that’s attracted less outside attention. Crooked River Burning was Cleveland novelist Mark Winegardner’s attempt to write the Great Rust Belt Novel, but the book is so crammed with local references—to Alan Freed’s Moondog Coronation Ball, to the Browns, to the Cuyahoga River—that it comes off as more of a local nostalgia album than a book that defines an entire region.

[blocktext align=”left”]The real artistic star of the book is Gary Dumm, a Cleveland illustrator who perfectly captures the city’s look: Orthodox Churches, old brick corner markets, windswept bus stops[/blocktext]The best Cleveland book is not a novel, or a history, or a work of journalism. It’s Harvey Pekar’s American Splendor and More American Splendor, a collection of the VA hospital file clerk/irritable shlump’s autobiographical cartoons from the 1970s until his death of an accidental overdose of antidepressants in 2010. Has the low point of one man’s life ever coincided so perfectly with the low point of his city’s? Pekar’s ironically titled comic book comprises a graphic novel of life in the three-quarter century Rust Belt, absorbed the malaise of Cleveland in the years after the Cuyahoga River fire.

The early and middle seventies—what a lonely, awful time for me!” wrote Pekar, who was between wives during those years. “It seems like it was always snowing and I was always looking out the window by myself.”

Pekar broke into comics through his friendship with Robert Crumb, a fellow jazz collector who worked at Cleveland’s American Greetings in the 1960s. But the real artistic star of the book is Gary Dumm, a Cleveland illustrator who perfectly captures the city’s look: Orthodox Churches, old brick corner markets, windswept bus stops. A hipster who never left home, Pekar found all the stories he needed in the lives of the steelworkers, fellow file clerks, and old beatniks trying to hang on in a place the rest of America had turned its back on.

When I was writing Nothin’ but Blue Skies: The Heyday, Hard Times and Hopes of America’s Industrial Heartland, one of my goals was to show readers what an industrial city looked, sounded and smelled like. I went to high school across the street from a Fisher Body auto plant in Lansing, Mich. Every time I ran on the track, I inhaled paint fumes. Night shift workers watched our football games from balconies across Michigan Avenue. Double-decker auto carriers ferried bodies to the assembly plant on the Grand River, which glowed with a rainbow sheen.

I read over a hundred books in my research, but only a few captured the industrial life I’d witnessed growing up.

Blue Collar Community, by William Kornblum , was a University of Chicago sociology student’s thesis on South Chicago, an industrial village whose rhythms were defined by the round-the-clock work of U.S. Steel South Works. To understand the community, Kornblum took a job as a steel inspector. He captured the tavern life, the churches, the ethnic loyalties and the politics of blue-collar Americans in the 1970s, the last decade when they were still middle class.

Rusted Dreams: Hard Times in a Steel Community, by David Bensman and Roberta Lynch, picked up South Chicago’s story in the decade after Blue Collar Community, when Wisconsin Steel and U.S. Steel—which had employed tens of thousands of workers between them—shut down. The book put a human face on the steel crisis, capturing the stress and worthlessness felt by suddenly unemployed men who had worked since they were teenagers: “I feel like I’ve been robbed— robbed of twenty-five, twenty-six years of my life really,” says an ex-Wisconsin Steel worker who lost his house and car and moved in with one of his children.

Homestead: The Glory and Tragedy of an American Steel Town, by William Serrin, tells the same story in a different setting. No place in America has more history per square mile than Homestead, Pa.—home of Andrew Carnegie’s Homestead Works, site of the violent 1892 Homestead steel strike, birthplace of the Negro League’s Homestead Grays. Serrin, a labor reporter for The New York Times, traced Homestead’s arc—which was also the Rust Belt’s arc—from its heyday of pouring steel for the U.S. Navy and the Apollo program to its bankrupt desperation after the Works closed in the 1980s.

But no one captured it better than Ben Hamper, author of Rivethead: Tales from the Assembly Line, the best Rust Belt book ever written.

As a teenager, I picked up every copy of the Michigan Voice, Michael Moore’s alternative newspaper, looking for Hamper’s column “Revenge of the Rivethead.” Hamper spent 11 years riveting bumpers onto Chevy Suburbans at GM Truck and Bus in Flint. During a layoff, he submitted a music review to the Voice. Moore convinced him to write a column about the shop (as Michiganders call auto plants). Hamper’s writing allowed Moore to live a vicarious shoprat existence, while Moore’s editing/hectoring guided Hamper to the subject that would make him the mostly widely-read wage slave of the late ’80s and early ’90s.

After a nervous breakdown ended his automaking career, Hamper collected his columns into Rivethead. The book’s darkly hilarious tales of working on the line with Hogjaw and the Polish Sex God, and post-shift drinking binges at Mark’s Lounge, drew the attention of Slacker director Richard Linklater, who tried to turn Rivethead into a movie starring Matt Dillon. But like Hunter S. Thompson, to whom he was compared by his publisher, Hamper is an unfilmable author. Truly, he’s one of the most colorful stylists ever to plug in a typewriter. The Plant Manager’s State of the Factory address was “Knute-Rockne-reborn-as-Leo-Buscaglia-on-the-threshold-of-industrial-Guyana rah-rah speech.” Flint is a “town that genuflects in front of used car lots and scratches its butt with the jagged peaks of the automotive sales chart.” But he had to be a sleight-of-pen magician to distract readers from a subject whose monotony would stump most authors after 300 words. Only a genius could write an entertaining book about assembly line labor. But not even a genius can make an entertaining movie about it.

Edward McClelland is the author of Nothin’ But Blue Skies: The Heyday, Hard Times, And Hopes of America’s Industrial Heartland.