I saw a dinosaur carcass the other day in the driveway of an abandoned house on a side street off St. Clair Avenue.

It was a dark green Ford LTD with a tattered brougham roof peeled back to the rusted metal. I couldn’t see the front, but the two rear tires were flat and the back window was starred. I was as surprised to see it as a farmer plowing up a T. rex skeleton in his field. I thought all those cars of my youth had crumbled into piles of rust or been compacted into junkyard cubes long ago. I’m sure the car I saw hadn’t run in 15 years or longer, but the fact that it was still more or less intact and recognizable is remarkable.

[blocktext align=”left”]When I think back on the 1970s, I think of dark, snowy winters and the oversized, rusty beaters that seemed to epitomize Cleveland’s decline…[/blocktext]I don’t know enough about cars to cite the model year, but I would’ve guessed 1977 or 1978, which would make it a relic of Cleveland’s bleakest decade, the period when the city’s decline became apparent to all, the decade Cleveland became a national punchline. Ralph Perk, Dennis Kucinich, default.

I graduated high school in 1979, and even though I wore my WMMS Buzzard and “Cleveland: You’ve Got to be Tough” T-shirts with pride, I was already planning my escape: college out of town and then a job somewhere, anywhere else. I couldn’t imagine a future in a dying city.

When I think back on the 1970s, I think of dark, snowy winters and the oversized, rusty beaters that seemed to epitomize Cleveland’s decline: Pontiac Bonnevilles, Olds 98s and Chrysler New Yorkers, Mercury Grand Marquises, Chevy Cutlasses and AMC Javelins and Matadors. When those cars rolled off the assembly lines in Detroit, our partner in Rust Belt decline, their size and ornamentation were meant to symbolize American power and opulence, but that conceit took a pounding throughout the 1970s, just as the cars did. 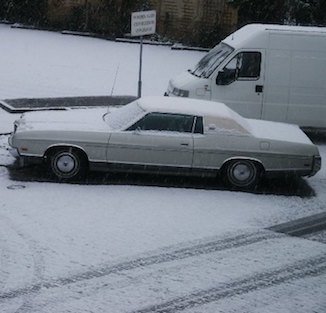 Few people knew it at the time, but the successors to those land yachts were already on the road. Hondas and Datsuns, small, cheap, and efficient, squeezed among their larger American counterparts, like early mammals dodging their way between lumbering sauropods.

And, just like those dinosaurs, the 1970s cars died off, struck down by the triple asteroids of rust, engineered obsolescence. and gas-guzzling V8s. No one really missed them.

Cleveland still has old cars, of course. But they’re smaller, rounder, and sleeker and they don’t broadcast their decrepitude as obviously. Old Hyundais and Subarus will never look as bad as old AMC Gremlins and Ford Pintos did, cars so ugly they looked like they were designed with that as a goal.

Cleveland is hard on rides. Actually, the whole Rust Belt is, the result of our climate and the Midwestern ethic of wringing the most out of everything before discarding it. Whenever I travel out West or down South, I’m struck by how nice the cars look, even the old ones. They benefit from smooth roads, mild winters, and a kinder car culture. When I do see a beater, it often has out-of-state plates: Ohio, Michigan, Pennsylvania, Indiana.

[blocktext align=”left”]Cleveland is hard on rides. Actually, the whole Rust Belt is, the result of our climate and the Midwestern ethic of wringing the most out of everything before discarding it.[/blocktext]I drive a car that, except for its Japanese heritage, would seem perfectly at home in 1970s Cleveland. It’s 17 years old and has 180,000 miles on it. It was in pretty good shape when I bought it 14 years and 140,000 miles ago, but, now, the passenger-side mirror that I shattered backing out of the garage has been held on with duct tape for three years and it’s been longer than that since the trunk lock worked. The dome light is burned out, the AC conked out two years ago, and the cable that pops the gas tank is broken so I have to pry the door open each time I stop for a fill up. There’s rust over the wheel wells and on the roof. A dent on the right side marks where I cut a parking garage corner too tightly. The spoiler on the trunk, a ridiculous, factory-installed affectation for a 4-cylinder Camry, is scarred from loading and unloading my kayak from the roof.

It’s ugly, but it runs. I hope to nurse it through one more winter, but it’s really up to the car at this point. I’m not willing to put much more money into it, but I’ll be sad to see it go. Its successor will be cleaner and prettier and have more features, but I know I will drive it until it becomes a Cleveland car.