Sewing in the City 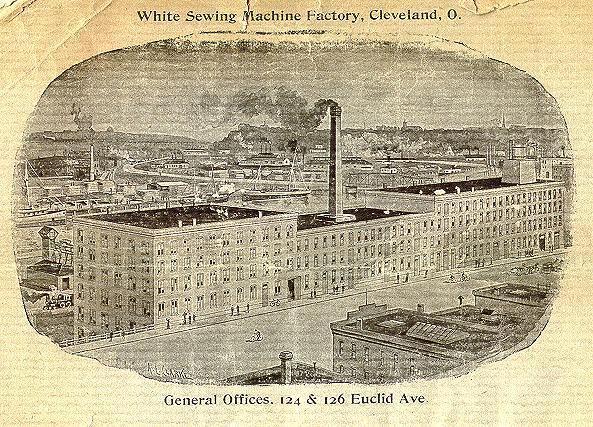 Cleveland has always been a sewing town. The White Sewing Machine Company called the city home for over a century, and JoAnn Fabrics, the national mega-retailer, was born here in 1943. There are a number of active sewing and quilting guilds serving northeast Ohio, and every year, Cleveland hosts the Original Sewing & Quilt Expo. Many of the sewing and quilting shows that air on national public television are filmed in nearby Solon.

People here like to sew. And while it’s true that most of them are older — younger Americans grew up without home economics classes or a financial need to sew — that’s been changing recently, thanks to the influence of online destinations like PatternReview, Craftsy, and Pinterest, and popular television shows like Project Runway. Along with the revival of some of Cleveland’s urban spaces, you can also see a more modern aesthetic in sewing and quilting taking shape in our city, and it’s attracting a much younger crowd to the craft.

Beyond the big box stores, there are two types of places a home sewer or quilter can go to get their fix in Cleveland. The first is the traditional sewing and fabric shop. Usually located in the suburbs, often in a small strip mall with few other creative businesses around it, these stores are destinations in and of themselves, and their customer base is largely over 50.

But the second type of store is located in more mixed use, walkable areas. You can find them nestled next to other arts-based businesses, and they cater primarily to a younger clientele. It’s in these newer shops where you can see how this craft is taking off.

In 2012, SVP Worldwide, the parent company of Singer Sewing Machines told the New York Times that they expected to sell 3 million sewing machines in the US that year, a drastic increase from even just a decade ago. Rosanne Papadimoulis, owner of Anna’s Sewing Center in North Olmsted, and a Cleveland area dealer for Brother Sewing Machines, confirms that sales to younger customers are increasing: “We get many in the tweens to teen crowd who come shopping for a sewing machine with their grandmother and mother, relying more on their grandmother’s help because their mother’s generation skipped sewing. But they watch Project Runway and want to sew.”

Everyone I talked to agreed that the resurgence in home sewing is at least partly due to Project Runway’s popularity. “The show took off the same time we started our business, and now we get younger customers who watch the show and come in with their fashion drawings, asking us to teach them how to make their designs reality,” says Megan Engelmann, a Kent State fashion graduate and half of the mother-daughter duo behind Stitch Cleveland, a studio in Lakewood known for its eclectic, vibrant fabrics and indie sewing patterns that are hard to find at large retailers. “Sometimes people come in and ask if anyone ever sews anymore, but if that were the case I’d be out of business, and I’m not.” 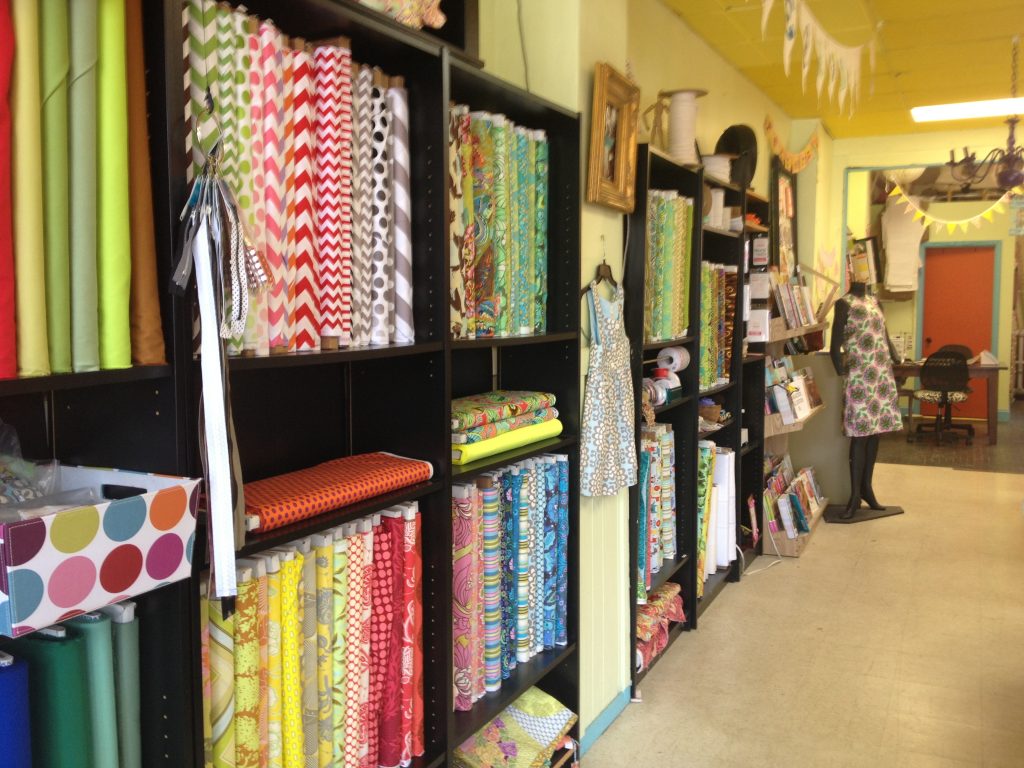 Engelmann started Stitch Cleveland in 2007 with her mother, Heidi Getzlaff Massingill, and since then it has steadily expanded its offering of fabric, classes, books and patterns. Massingill and Engelmann decided to open in Lakewood because it was centrally located, there was a walkable main street close to public transportation, and there weren’t any big box stores nearby. Being near a cluster of other arts based businesses and organizations, including the Beck Center for the Arts, has also helped attract customers who are curious about making things with their hands.

Stitch Cleveland’s private classes and summer fashion sewing camps are hugely popular. Most customers are twentysomethings, though the store also attracts children and teenagers. The first Friday of every month, Stitch Cleveland hosts an evening program where anyone can drop by to sew and socialize. Recently, they partnered with the Cleveland Museum of Art for a Make and Take Night where they taught the attendees how to stitch a simple bunting. 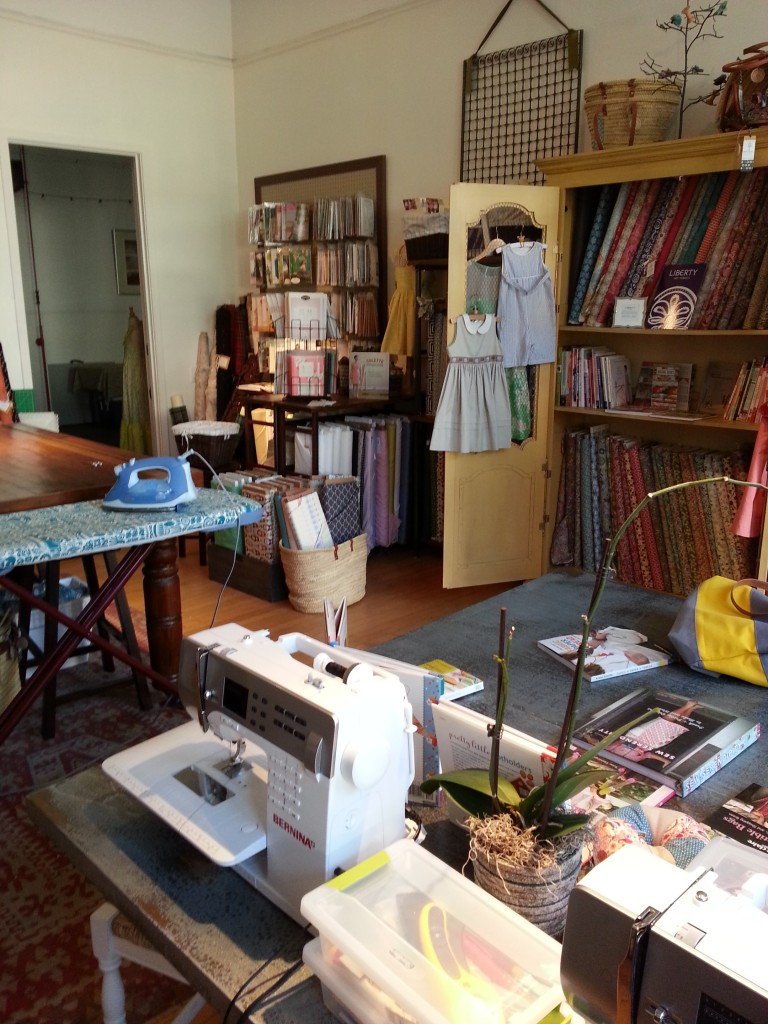 When Nan Webb opened Murray Hill Bolt & Spool in 2010, she was inspired by the beautiful fabrics and boutiques she had come across in Europe. Currently housed at the Murray Hill Galleries in Cleveland’s up-and-coming Little Italy neighborhood, Webb and store manager Debbie Christensen maintain a carefully curated selection of fine apparel fabrics, vibrant ribbons, maker kits, and local and European sewing patterns. For Webb, locating in Little Italy was an easy decision because it was affordable and close to home; the cobblestone streets also created the sort of atmosphere that inspired her in the first place. In 2013, the store expanded to a larger space and added an online shop. Webb notes that the boutique’s proximity to University Circle and the Cleveland Clinic has attracted international customers, tourists, and locals, which would not be possible in a more remote suburb.

Even though sewing-based businesses and studios increasingly cluster with other arts-based businesses and services, it’s much harder to answer the question of whether sewing is an art form or just a crafty hobby. “There is this whole debate in the art world,” said Christensen, a graduate of the Cleveland Institute of Art. “Sewing can be artistic and creative, but this depends on who is making it, and who is viewing it. Is it art if something is self-drafted or made from somebody else’s pattern?”

According to Carla Macklin, half of the Cleveland Heights based duo behind Clever Charlotte, a children’s sewing pattern company, “The best sewists/pattern designers are most certainly artists, but sewing is not elitist like many see the art world. The craft begins small and with effort anyone can learn.” As a pattern designer, Macklin says she finds inspiration everywhere; Clever Charlotte’s latest offering is inspired by a Balenciaga gown.

Quilting, on the other hand, has more easily found acceptance in the art world; the Boston Museum of Fine Art recently held an exhibition called “Quilts and Color.” According to Papadimoulis, who is also president of the Cleveland Chapter of the Modern Quilt Guild, contemporary quilting draws heavily on modern art — you can find patterns inspired by Paul Klee — but despite its recent reception in museums, it’s still not officially categorized as a “traditional art form,” which makes quilters ineligible for grants from the National Endowment for the Arts. Papadimoulis, along with other members of the Studio Art Quilt Associates, a national organization, is hoping to change that.

Whether or not sewing and quilting will ultimately be accepted as art forms is irrelevant to many who sew and quilt in Cleveland, however. They create beautiful things because they love the craft itself, not because it will lead to recognition in the art world. And for all the talk in Cleveland about creating a city that will attract a creative class of people, you only need to dust off that old sewing machine to discover that this is already a city full of creative people making beautiful things one stitch at a time.

Salma Ahmad lives in Cleveland, and loves to sew.