An Appalachian Community in Transition

In the last fifty years, loss of coal industry and frequent flooding have driven people out of Sharpsburg, Ohio. But not everyone is ready to leave.


The unincorporated community of Sharpsburg, Ohio—tucked away in Athens County’s rural Bern Township—was once a thriving crossroads between Athens, the county’s largest city, and neighboring Morgan County. Its densely-forested hills were originally cleared for farmland and later mined for coal. European settlers began farming the land in Bern as early as the 1790s, and organized independently from Ames Township in 1828.

At the beginning of the twentieth century, Sharpsburg boasted multiple businesses, a church, a post office, and a railroad. In the last fifty years, loss of coal industry and frequent flooding have driven community members out of Sharpsburg. Some of the community’s remaining residents are more financially and physically secure, owning large swaths of land uphill, above the area’s worst flooding. Others live below—in Sharpsburg’s flood zone—which was once the heart of the village, but now stands half-vacant.

I was born and raised in central Ohio, physically and culturally distant from life in the foothills of Appalachia to the southeast. But during the several months I spent photographing Sharpsburg, I came to better understand the way community and individual identity there are intertwined with the Appalachian landscape. This photographic essay explores that connection—and the joys, struggles, and determinations of a community in transition. 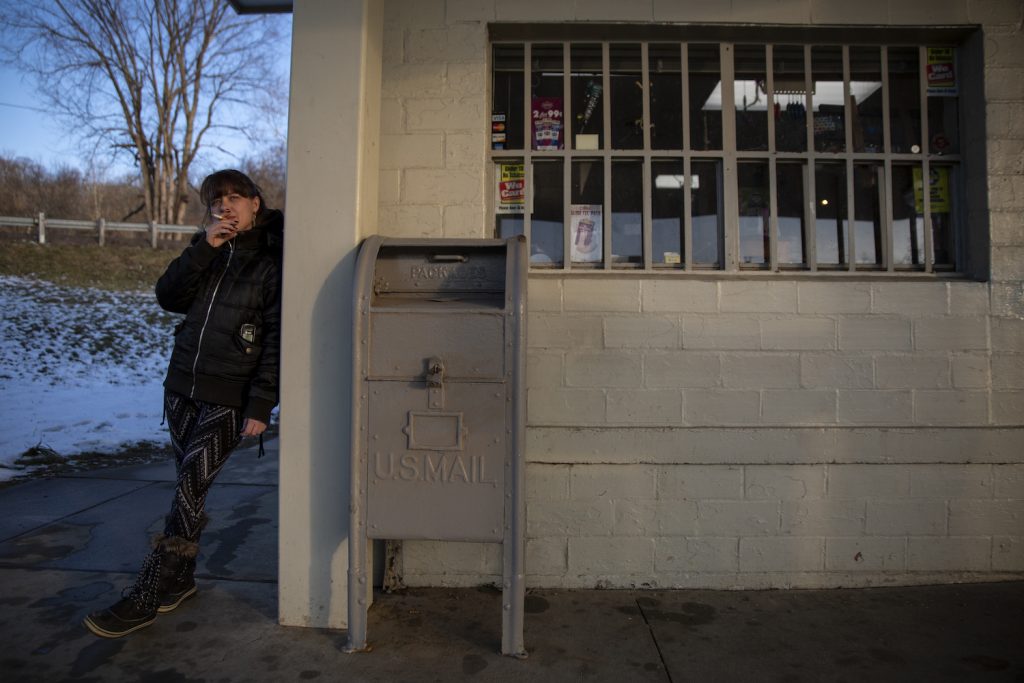 Brandy Riley takes a smoke break while working at Gilchrist Convenient Store, the only business in the unincorporated community of Sharpsburg, Ohio. This store and gas station also operates as a U.S. Post Office for everyone in the 45777 Sharpsburg ZIP code. “This place is like Grand Central Station,” Riley said. 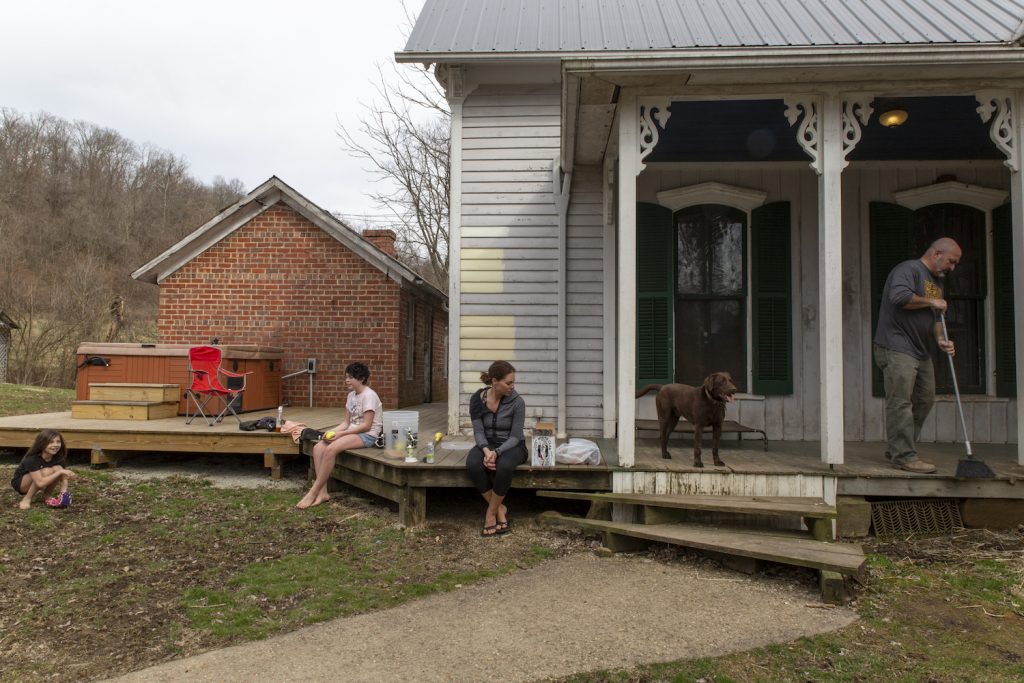 The Ditty family unwinds on the porch of their home, a farmhouse built in the 1830s. The Dittys moved to Sharpsburg in 2015 to raise their daughters in a simple, slow-paced environment, though it’s not without its challenges. “If you can’t be self-sufficient, you shouldn’t even try to live like this,” Jeff Ditty said. 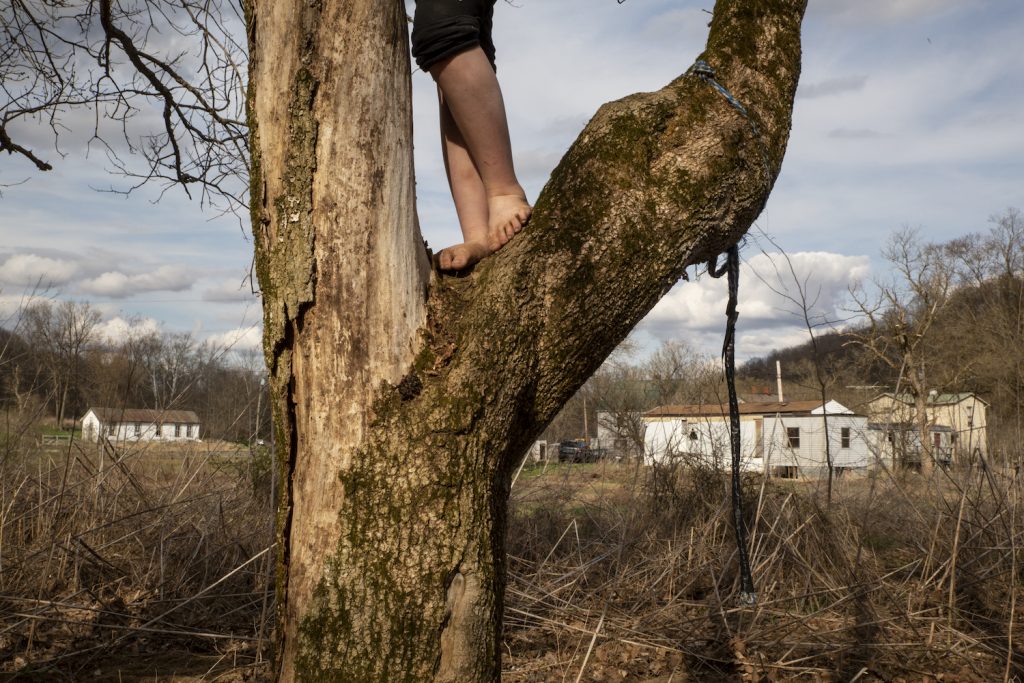 Brooklyn Roof, six, climbs a tree near her home, a rented trailer in Sharpsburg, Ohio. The Roof family has resided in Sharpsburg for nine years, but worries about its future because the community lies in a flood zone near Sharps Fork Federal Creek. “I don’t want my house to wash away,” says Audra Roof. 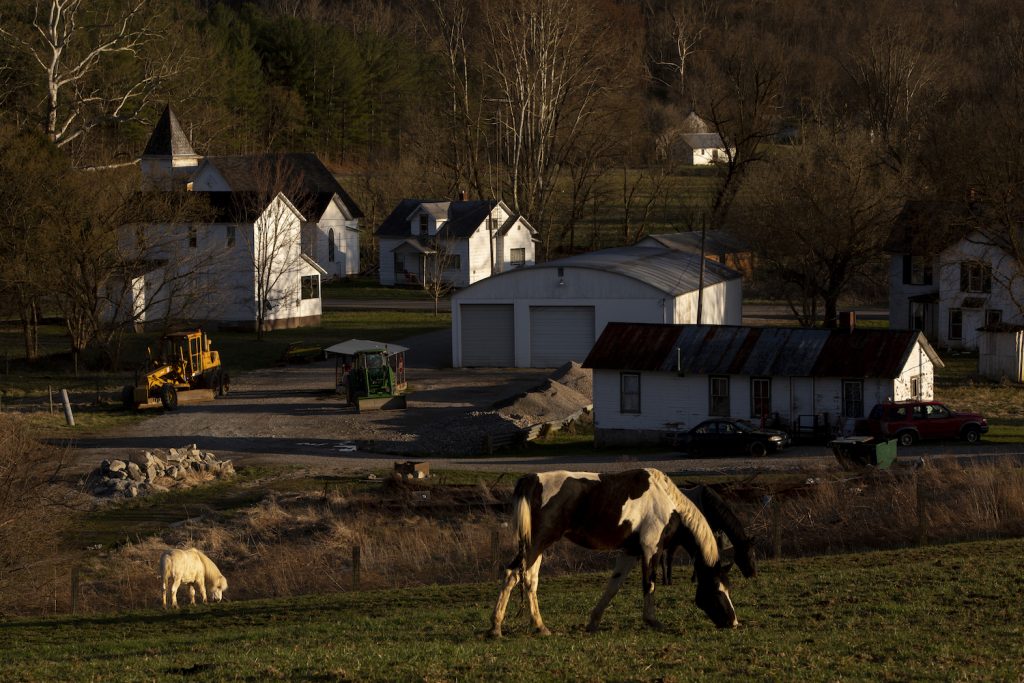 The heart of Sharpsburg, stretching along Joy Road, is still referred to as “the village” by locals, though only four of its homes remain occupied. Aside from a lack of industry, major flooding since 1998 has also pushed long-time residents out of Sharpsburg. 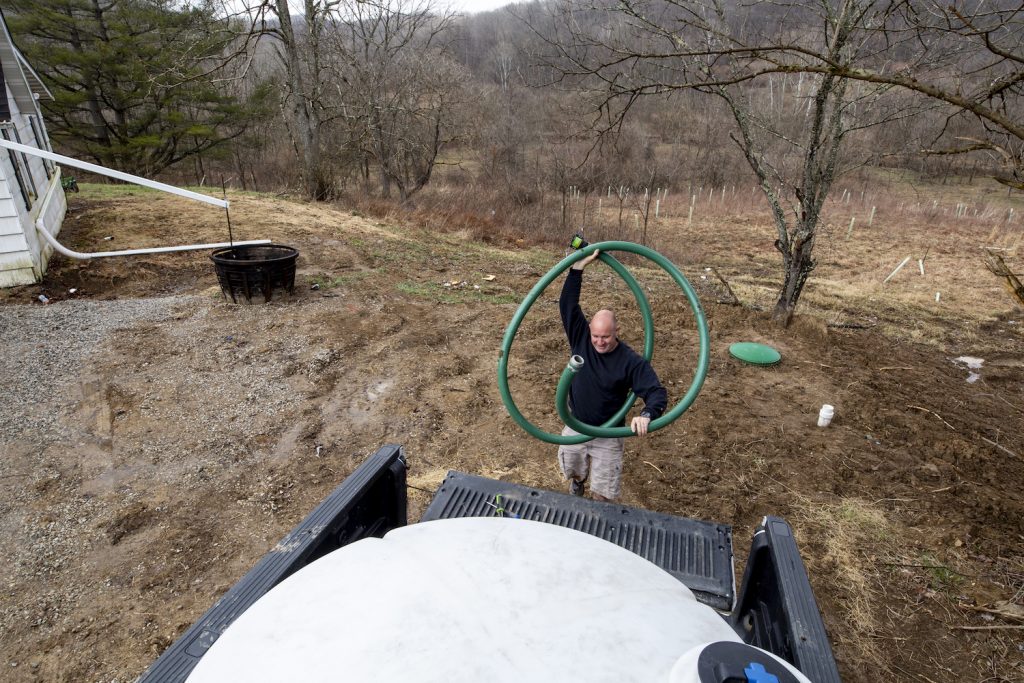 Sharpsburg does not have access to municipal water, so residents must dig wells or drive six miles to the city of Chesterhill and fill up tanks in order to access water. Dustin Leuschel makes this trek every few days. While they may lack easy access to water, many Sharpsburg residents have their own private gas source. 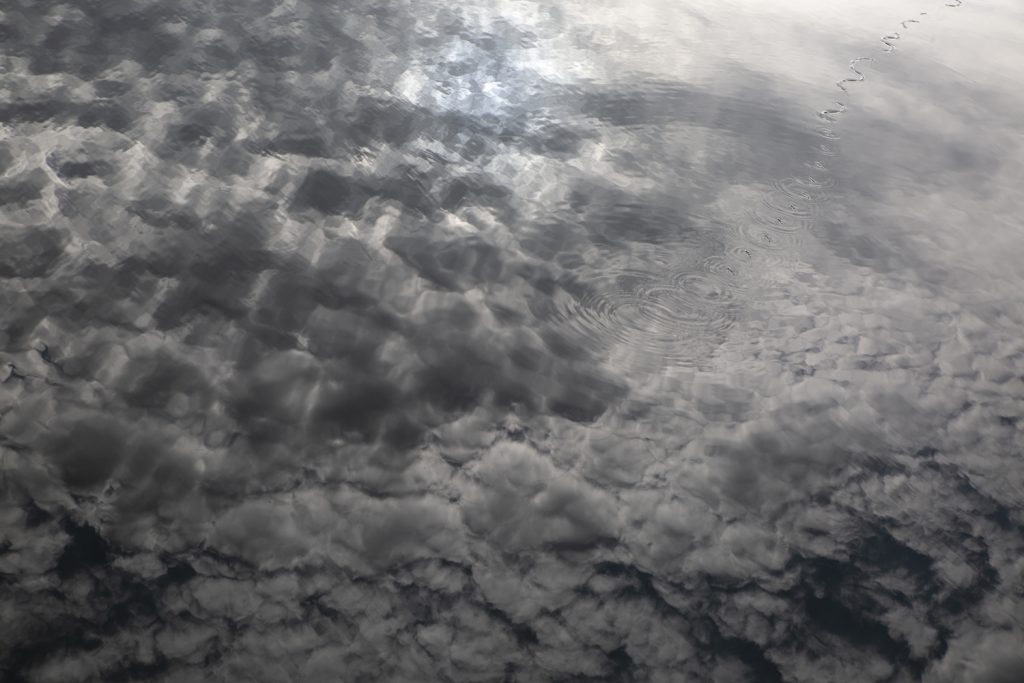 Sharpsburg has a complicated relationship with water. Recreational activities like fishing and swimming add to residents’ quality of life, but living in a flood zone simultaneously threatens their wellbeing. 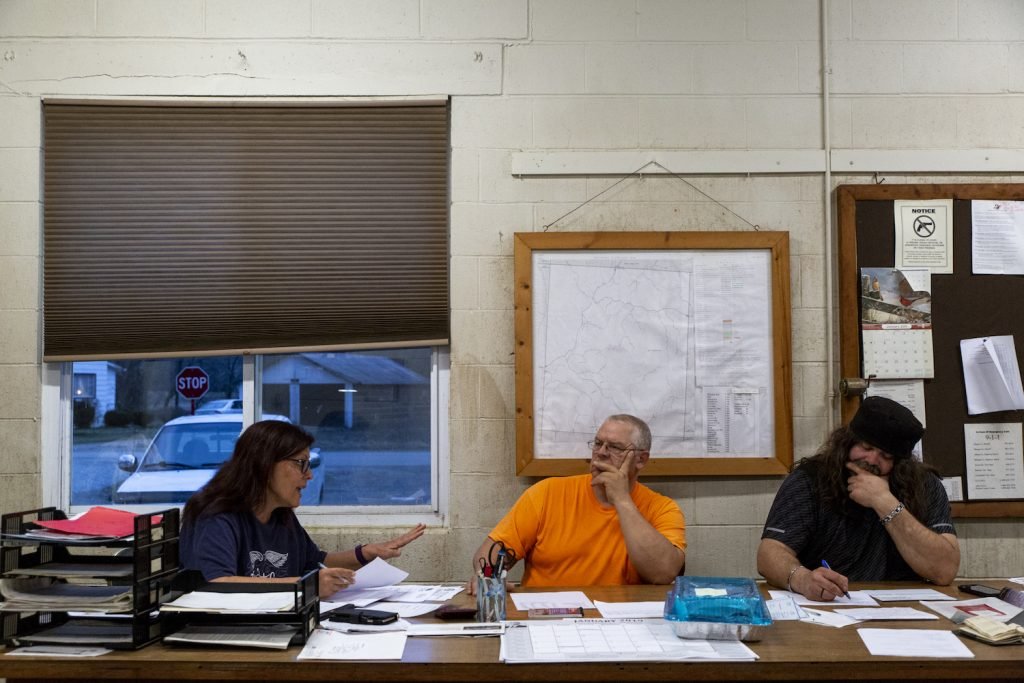 Bern Township Fiscal Officer Denise Tate and Trustees David Bennett and Alan Gilchrist discuss FEMA during their monthly meeting at Town Hall in Sharpsburg. As an unincorporated community, Sharpsburg is not governed by a municipal corporation and is, instead, administered as part of Bern Township. 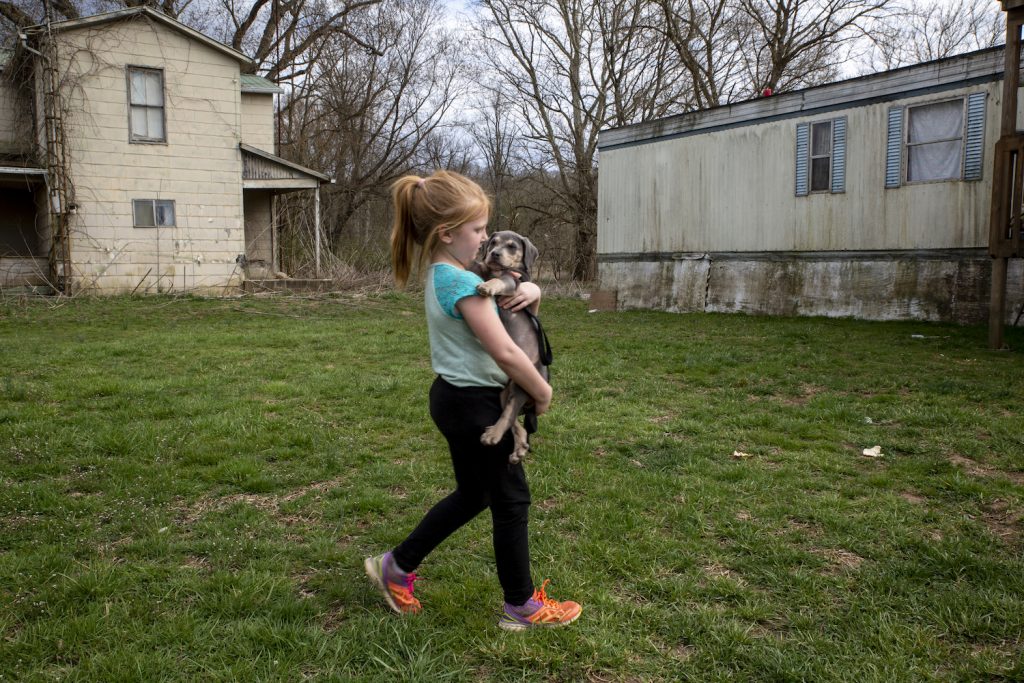 Brooklyn Roof walks toward her family’s trailer holding their new puppy, Chocolate. Many of the community’s oldest buildings have been abandoned, but stand alongside the few remaining inhabited homes because it’s costly to tear them down. 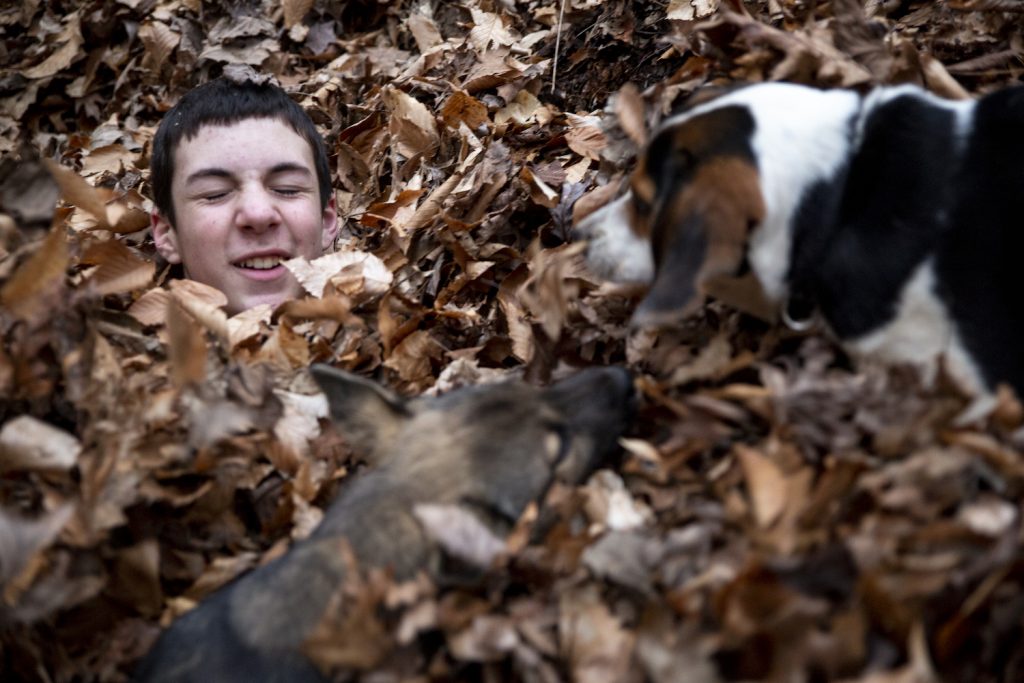 Riley Russell, thirteen, plays with two of his family’s five dogs in the woods of their property, which stretches more than two hundred acres. 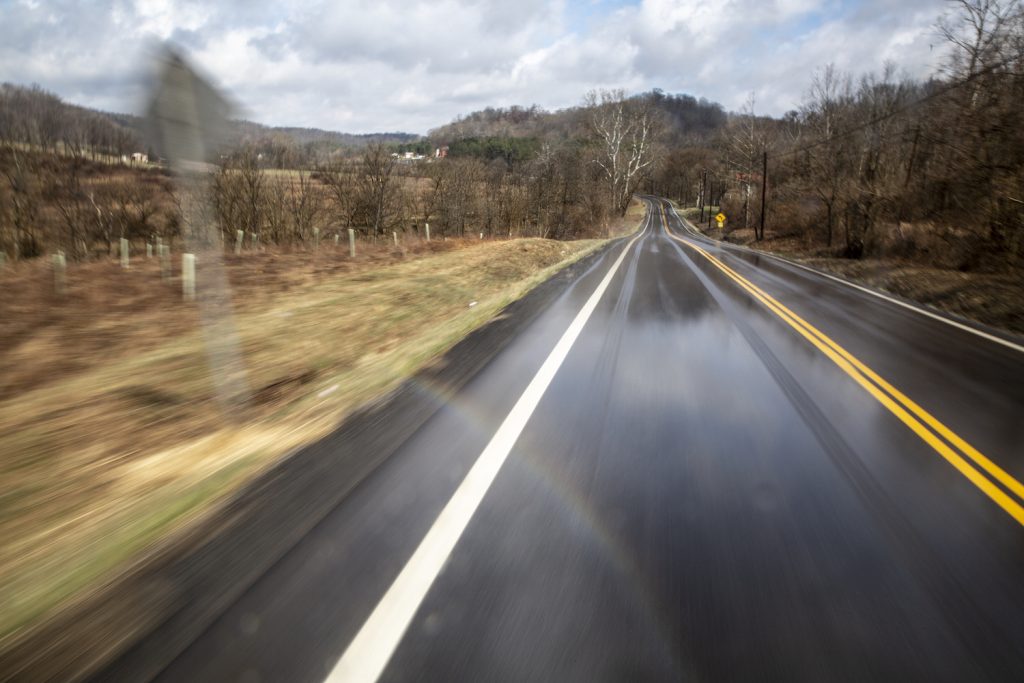 Though the community is cut off from many resources, Ohio State Route 550 runs directly through Sharpsburg, connecting it to Chesterhill, Amesville, and the county’s largest city: Athens. 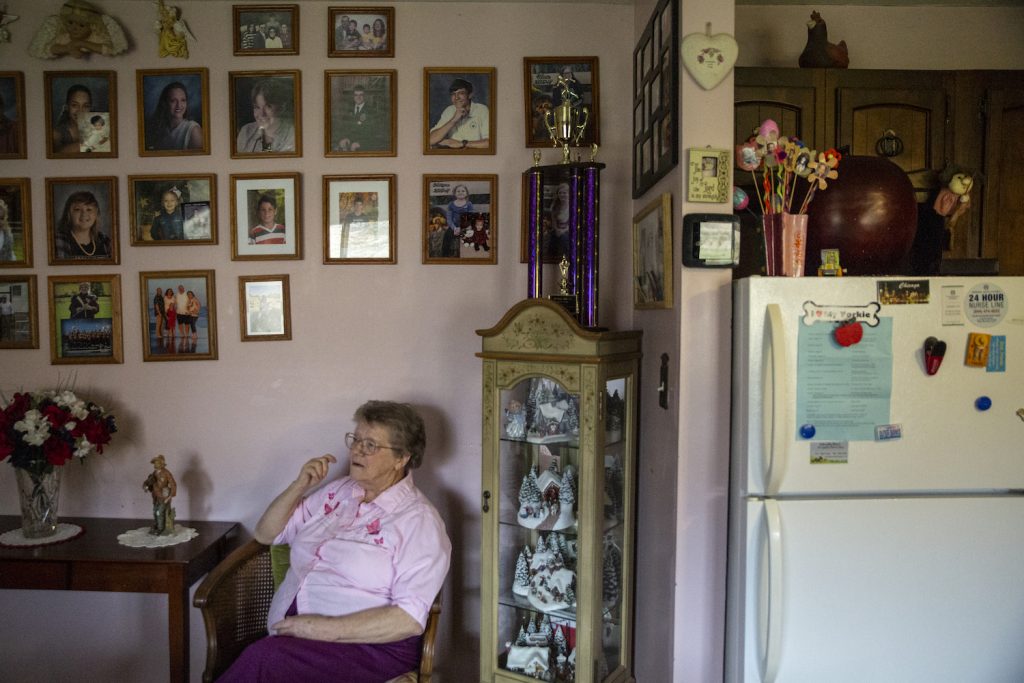 At eighty, Donna Russell is one of Sharpsburg’s oldest residents. Proximity to family is important to Donna, who lives on the same property as multiple family members, each with their own subdivision. 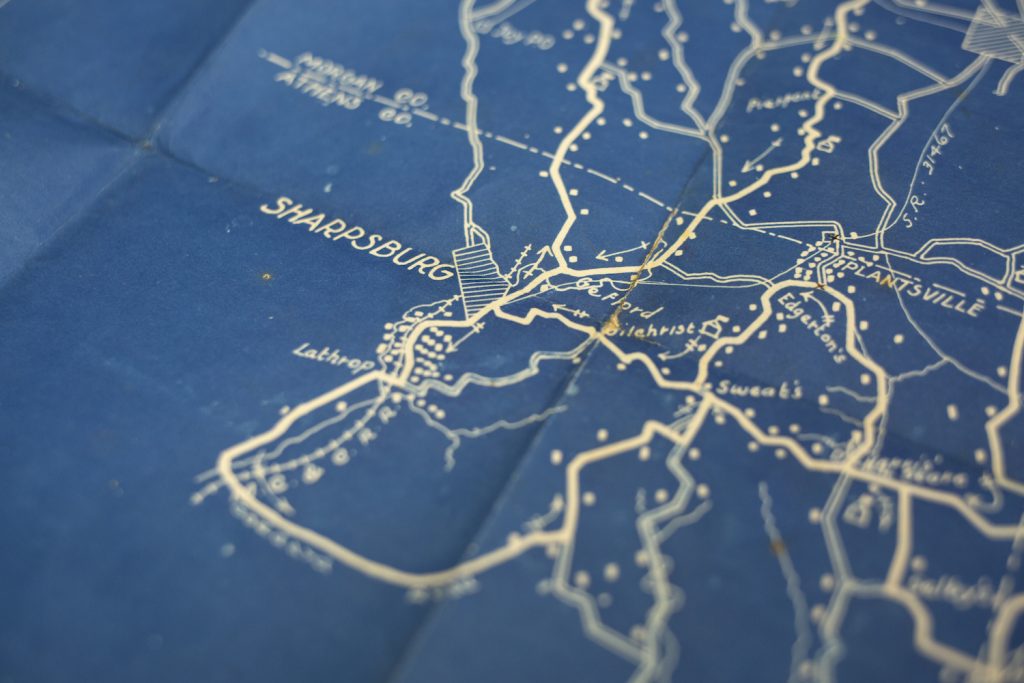 A 1906 map of local postal delivery routes remains in possession of the Gilchrist family, who have lived in Sharpsburg for seven generations. “It’s getting down to where Sharpsburg and the ZIP code only matters to me,” said Wayne Gilchrist of the dwindling population. “I’m trying to hang on to it.” 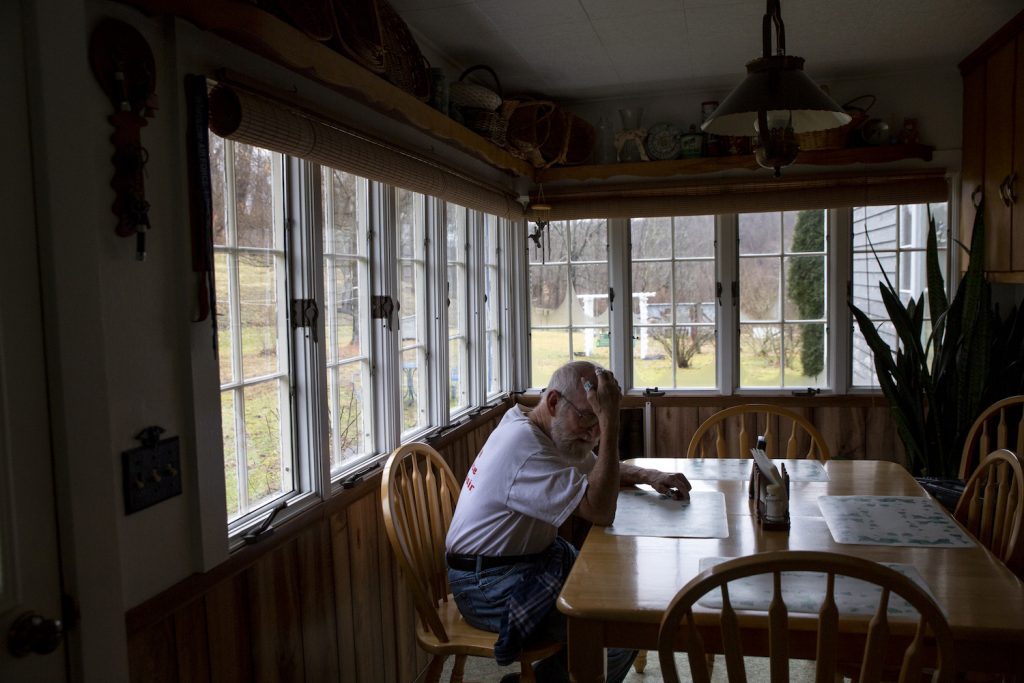 Bobby Spaulding, eighty-two, rests in his kitchen after feeding his fifteen cattle. Although he is battling cancer for a second time, Spaulding continues to raise cattle with his wife in order to afford their home. While he would like to sell the farm, his wife, JoAnn, says she can’t leave because “it’s just home.” 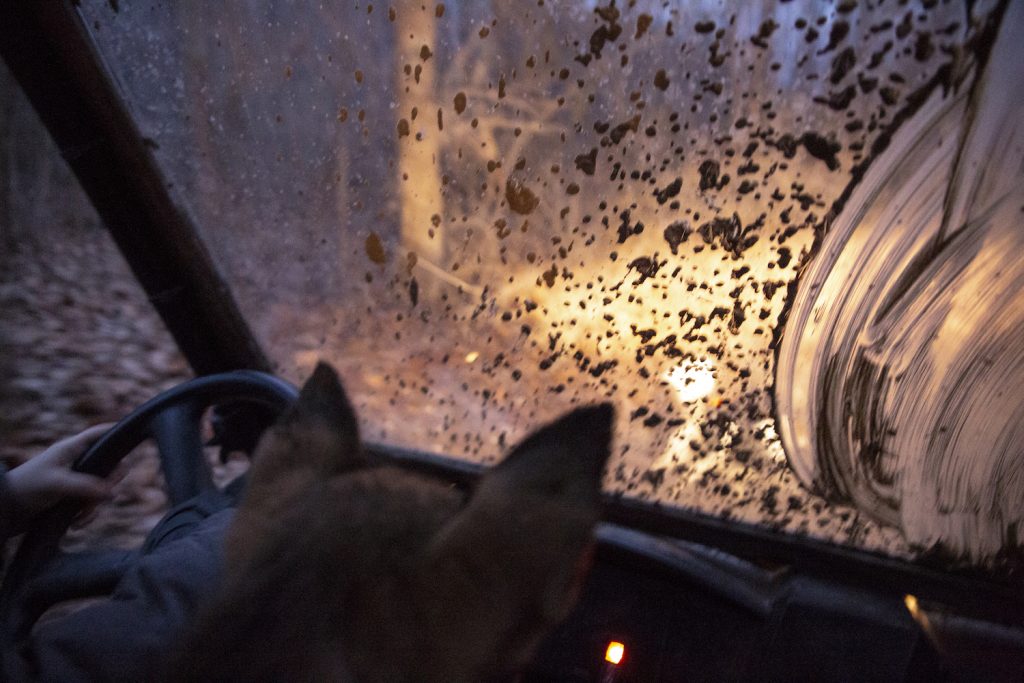 Side-by-sides, motor bikes and ATVs are popular means of transportation in Sharpsburg. While they are used recreationally, many local farmers need utility vehicles to traverse the area’s hilly terrain, particularly during the muddy spring months. 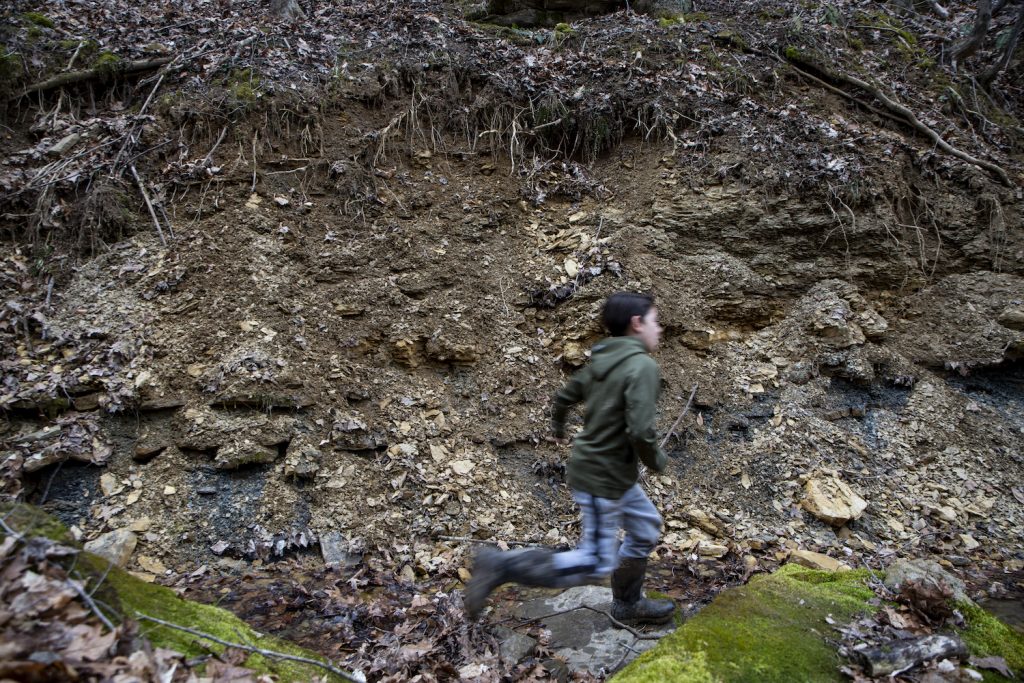 Court Russell, ten, runs past exposed coal deposits on his family’s property. Sharpsburg was an active coal-mining town until the mid-twentieth century. There have been efforts to resurrect the coal industry in Bern Township as recently as 2011, but they were met with resistance from environmental groups in neighboring communities. 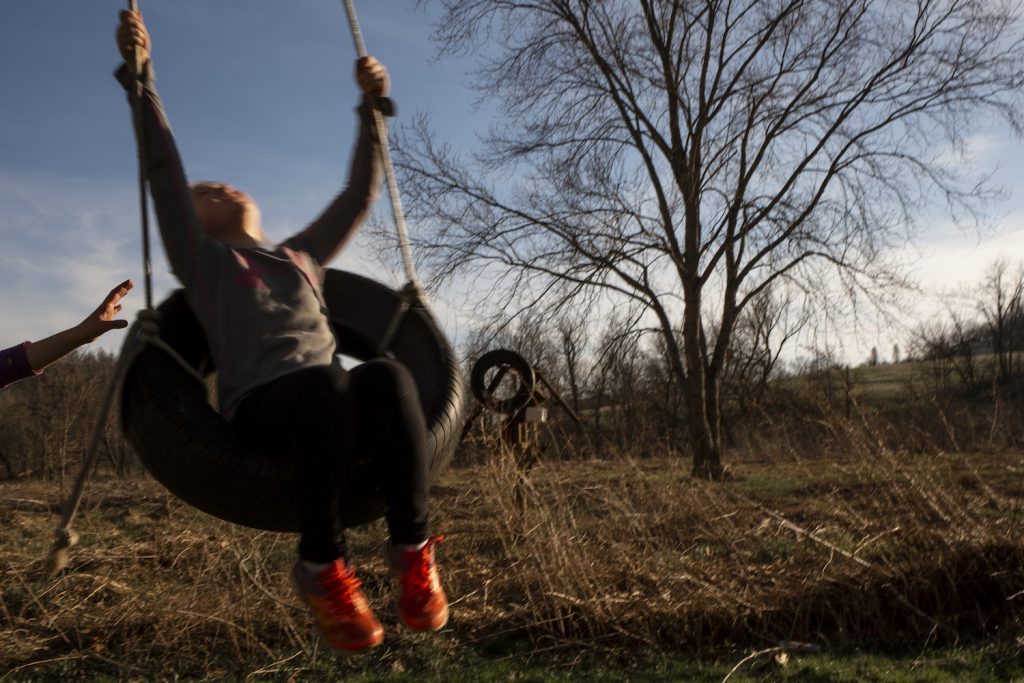 Because Sharpsburg does not have cell reception or reliable internet service, children in the community often find entertainment outside, roving the landscape of the place they call home. ■

Christiana Botic is a Masters candidate in Photojournalism at Ohio University. Her documentary work often explores the relationship between identity and geography, particularly along borders. She is currently interning at the Evansville Courier & Press in Evansville, Indiana.