The Sweetest Little Town Around

Inside the Shepherd Sugar Bush, an old-school community maple syrup operation in Michigan


The blades on hundreds of wind turbines cut through the air with rhythmic consistency. From the highway I can see them standing high above the crop fields in every direction, disappearing with the road in the distance. We’re almost there now. The next landmark is the golden ‘M’ of the combo McDonald’s-Gas Station just off the highway. 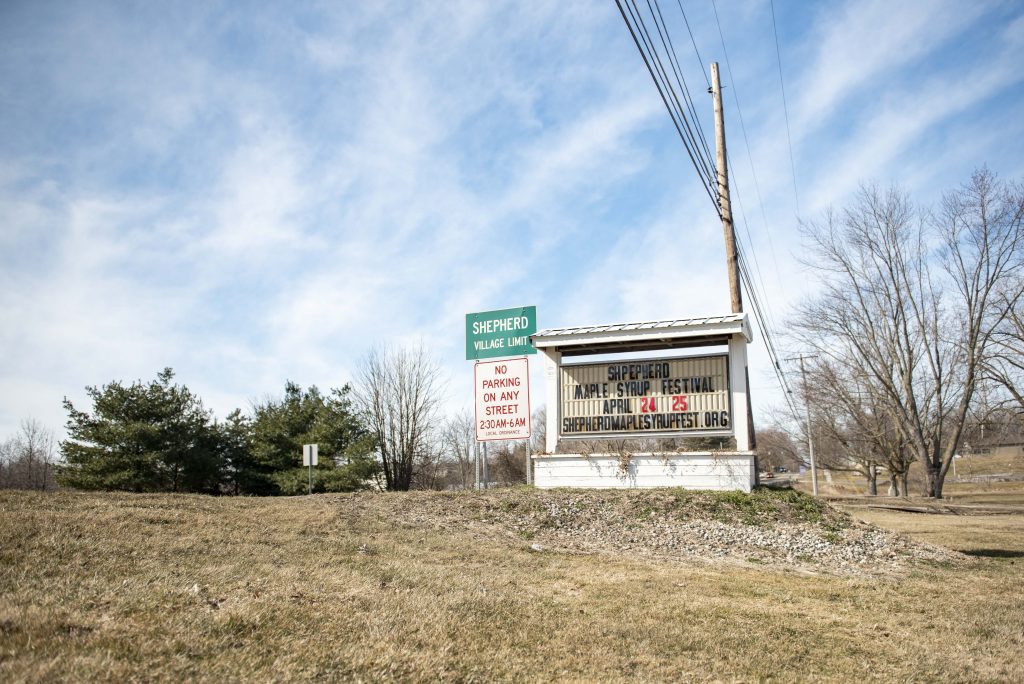 Our exit, Blanchard Road, will lead us through the village of Shepherd, located just down the road from that traveler’s stop. Hundred-year-old houses shaded by hundred-year-old maple trees line the main street. Gazing out the car window, the view of the village changes only with the seasons. The stillness of town provides a last checkpoint before we reach my Grandma’s house. 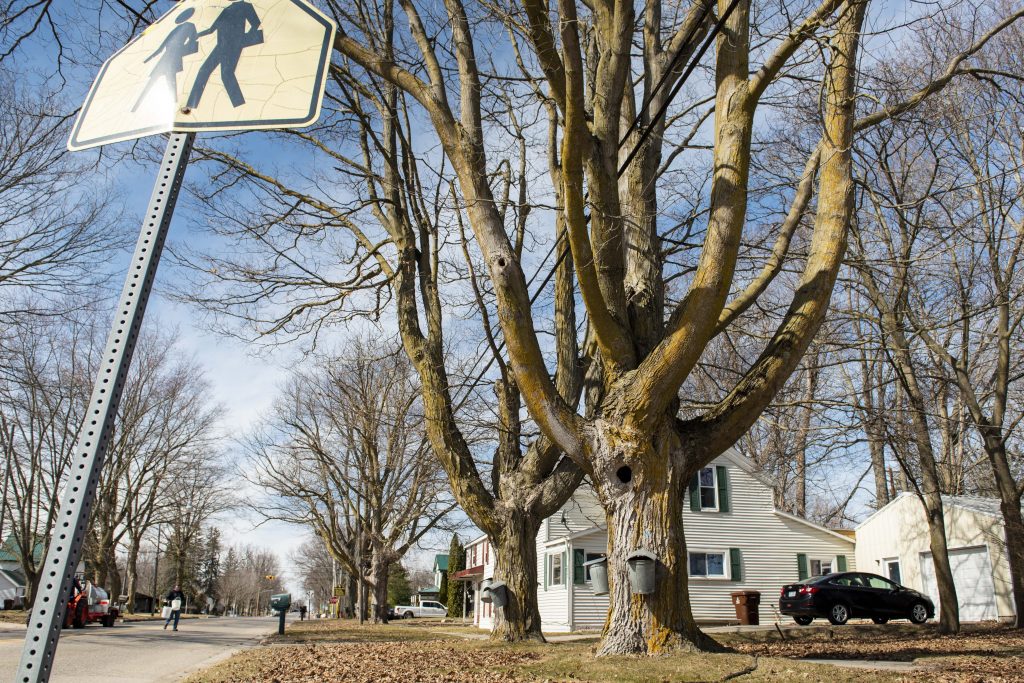 I begin to look for signs of spring as early as February. Michigan winters seem everlasting at that point in the year, when the cheer of holiday lights is gone but the stubborn snow remains, muddy and slushy, with gray winter skies persisting for months. I’m hopeful with each visit that this drive will be the one where the Shepherd maple trees are tapped with old, metal sap buckets. I ask my grandma on the phone if they’re out yet. 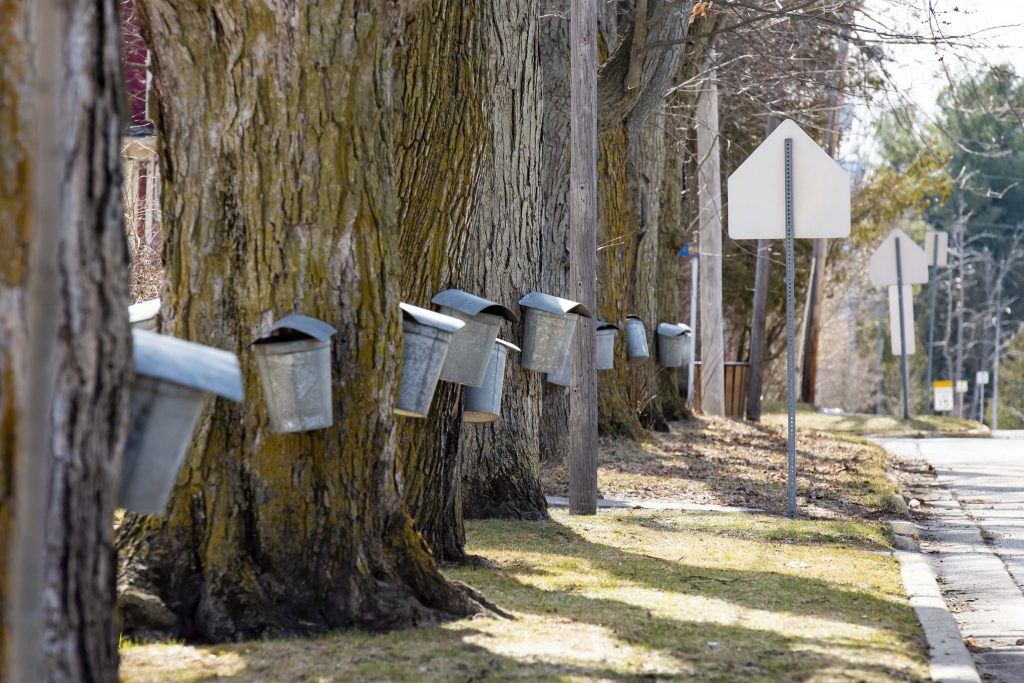 This is the annual Shepherd Sugar Bush operation. While the appearance of the sap buckets always seems sudden to me, the sap collection and syrup production is dependent on hundreds of hours of work from longtime volunteers. This year, I wanted to experience the community effort behind the project first hand so I joined in on a day of collection and production. 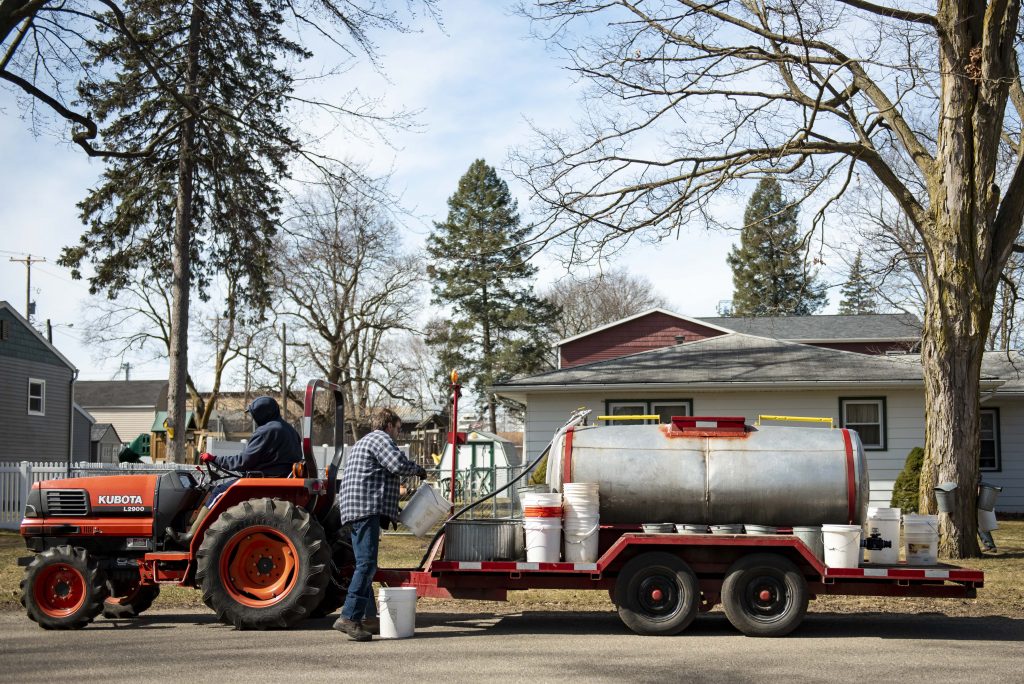 I drove into Shepherd looking to meet the volunteers out collecting sap. The sun was shining bright in a rare early spring appearance that helped to alleviate the chill in the air. Following the directions of Dave Gimmey, Shepherd Sugar Bush Vice President, I found the volunteers out working before I even made it to the Sugar Bush. 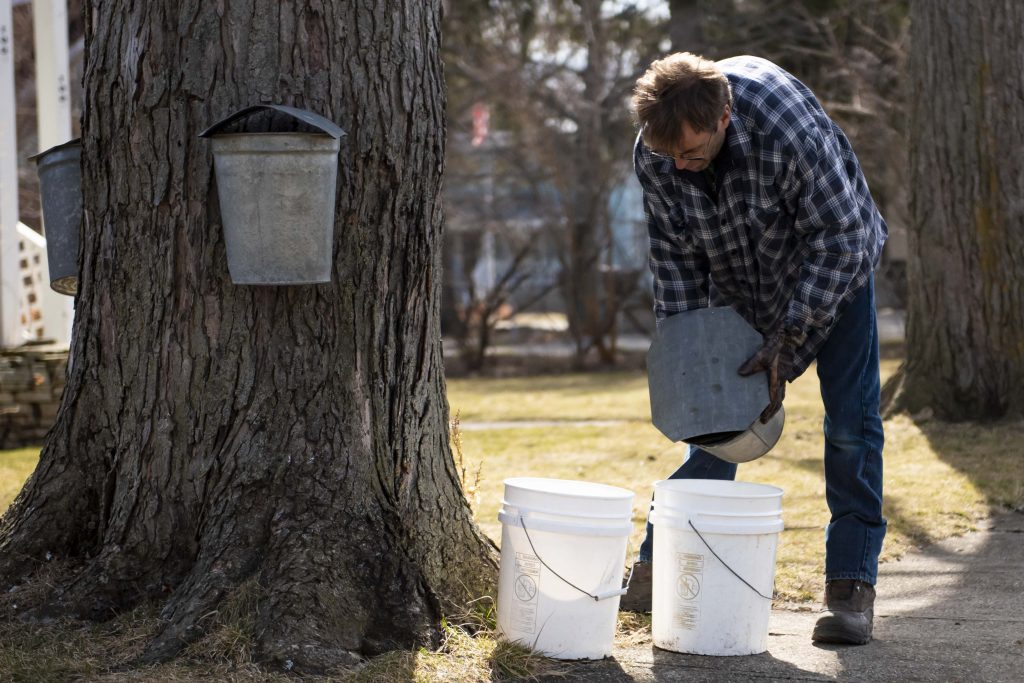 Dave wore a blue and white flannel shirt. He carried five gallon buckets back and forth between the Maple trees and a tractor hauling a large tank. He and John Vallen, President of the Shepherd Sugar Bush, quickly lifted the sap buckets up and off the spiles. They dumped the contents into larger plastic buckets as they went, and the sap rushed out when dumped into the tank. The fluid was much less viscous than I imagined. 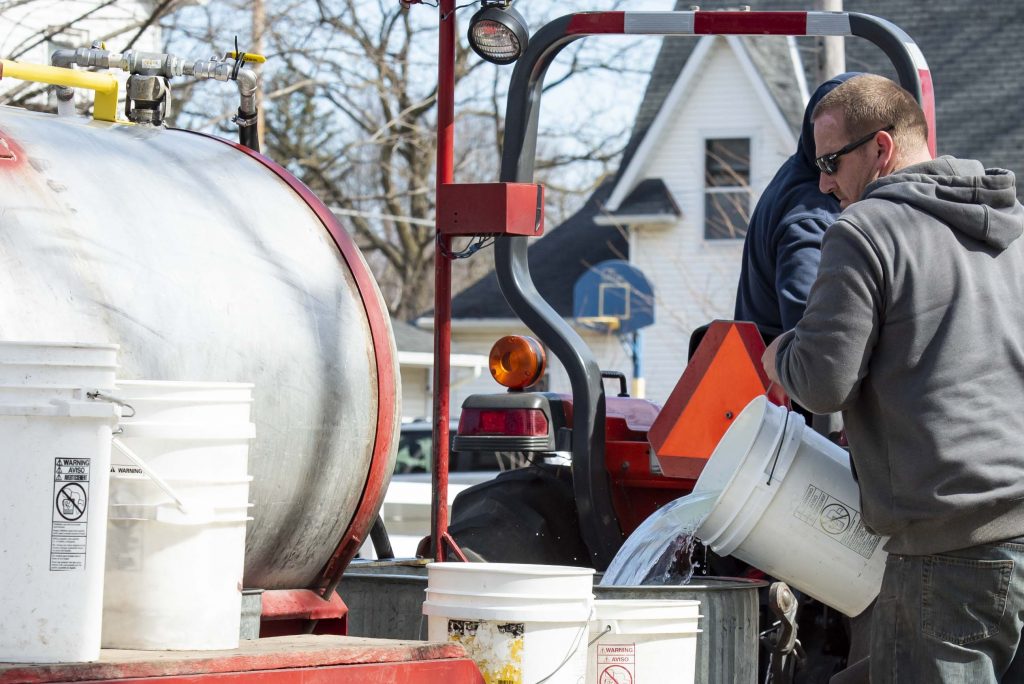 I followed Dave and John as they weaved around the trees with habitual strides, their buckets sloshing with sap. The tin sap buckets seem to be unique to Shepherd, as the tapped maple trees outside of town have clear plastic bags hanging from their trunks. The antiquated buckets prevent unnecessary accidents, but they also match the hundred-year-old houses by which they stand. Dave noted their durability. 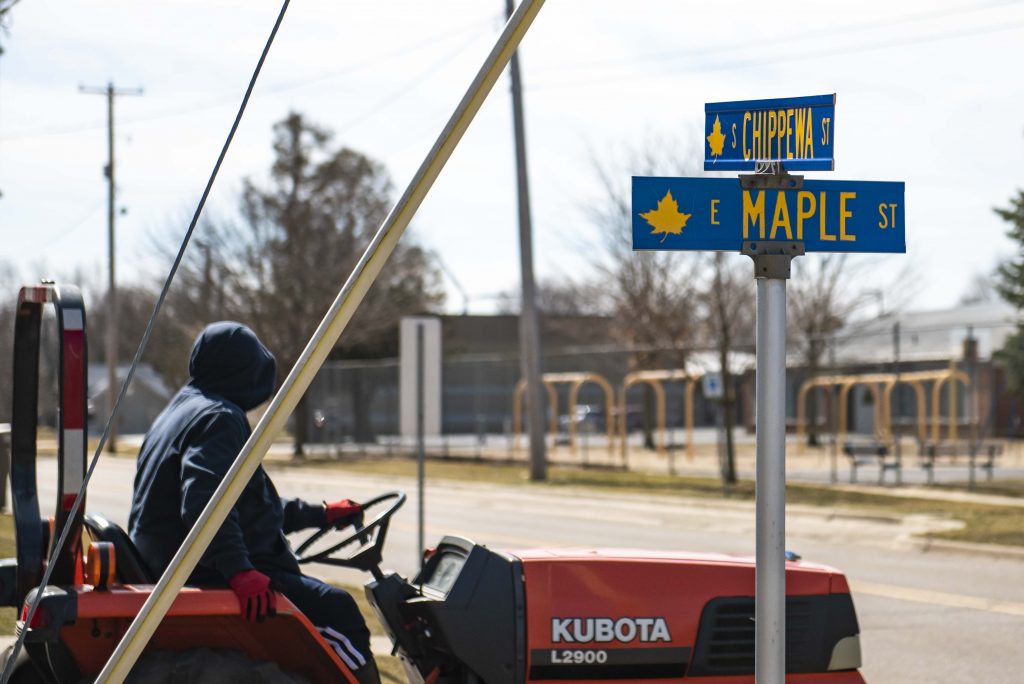 Chris Cross, another longtime volunteer, picked up speed as he steered the tractor East through town. Every additional volunteer helps to speed up the collection process, and local youth groups and sport teams will often come out together for a unique bonding opportunity that benefits their community. Chris confessed that youth volunteer participation has declined over the years, citing the omnipresence of technology and busier schedules as potential causes. But that morning, a local high school student and his parents were among the extra volunteers. 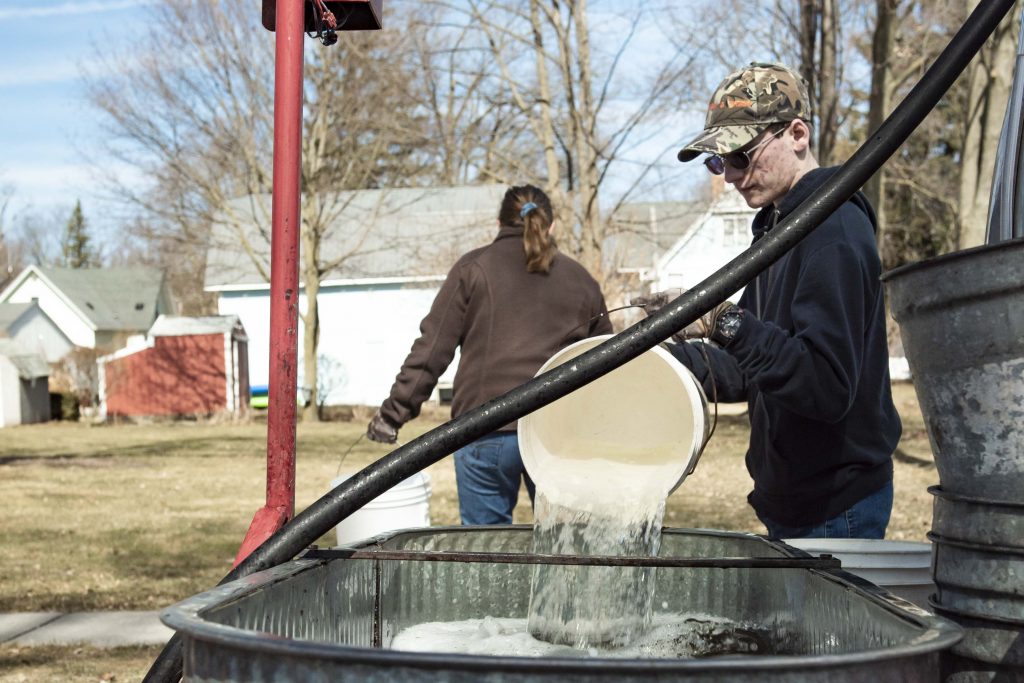 The volunteers tackled the trees at the Shepherd Elementary School, located just a few blocks West of the middle school and high school where many of the Shepherd Maple Syrup Festival Activities take place. The festival is held annually the last weekend in April to celebrate the end of a successful syrup season.

Dave points to me as he and John hop on the back of the tractor trailer. “You want a ride?” 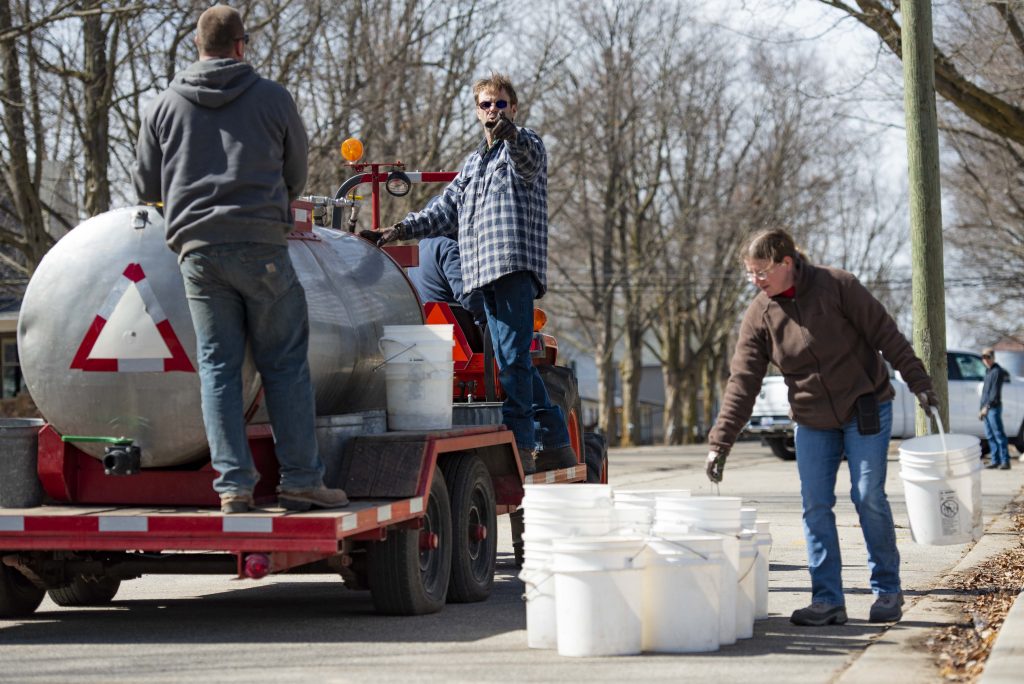 Inside the Sugar Bush garage, surrounded by forty gallon syrup containers and handmade signs describing the syrup production process for potential visitors, the three men waited for the tank to empty. Chris tilted it upward to help it drain while Dave checked the sugar content of the sap. 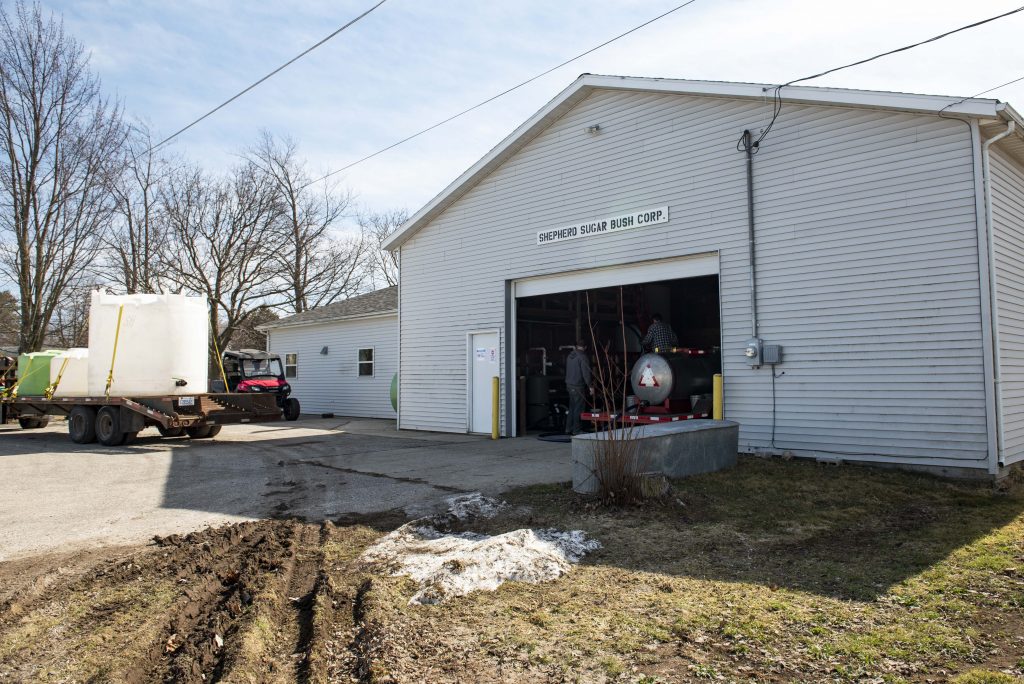 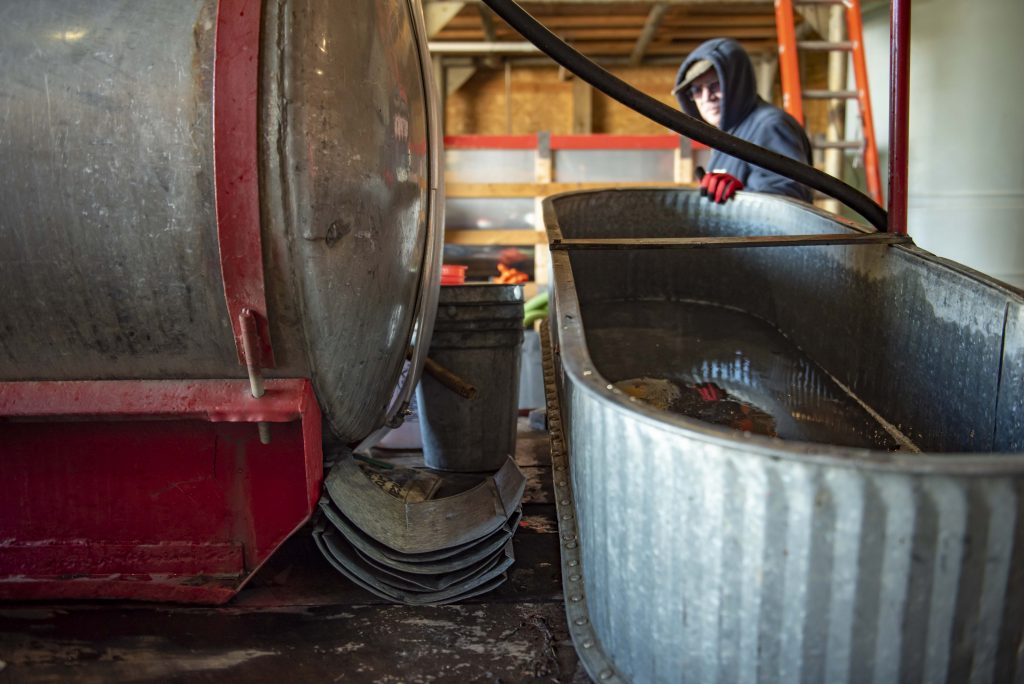 Inside the boiler room it’s warm and humid, filled with the overwhelming sweet smell of maple syrup. The reflective metal of the evaporator shakes as the heat builds–steam rising, sap bubbling and splashing. The heat and bright orange light flushed my face as I watched the zig-zag flow of sap through the evaporator. 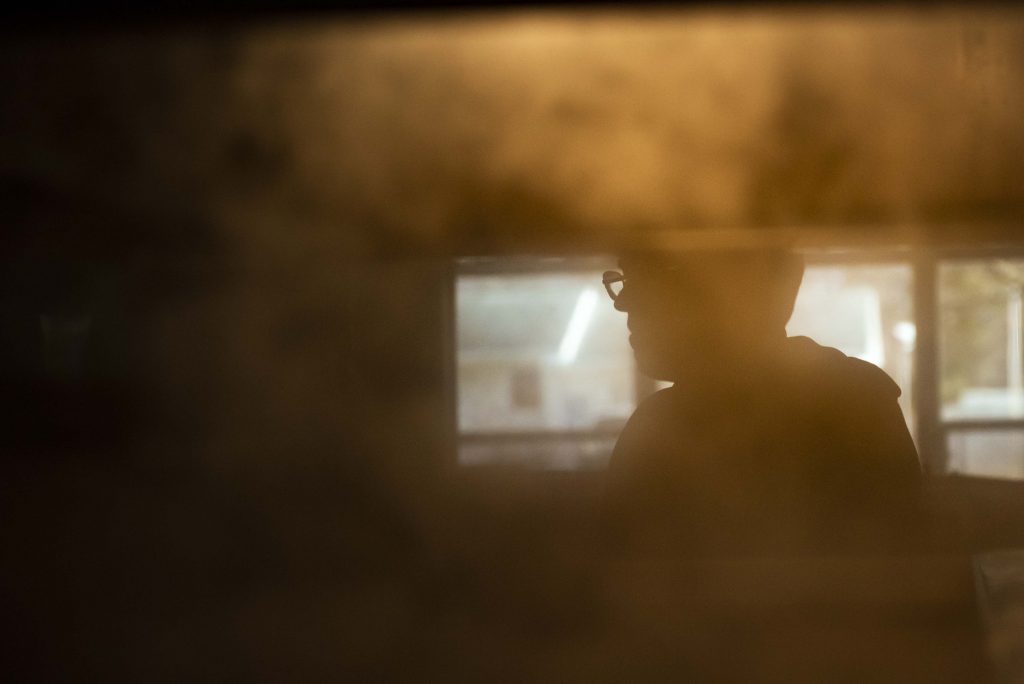 While Dave was busy managing production, Chris opened the stock room door to show me hundreds of stored bottles of syrup packaged on site. Chris told me he’d been doing this for eighteen of the twenty years he’s lived in Shepherd. I asked him why he started volunteering. “I’m a sucker,” he said, and laughed. 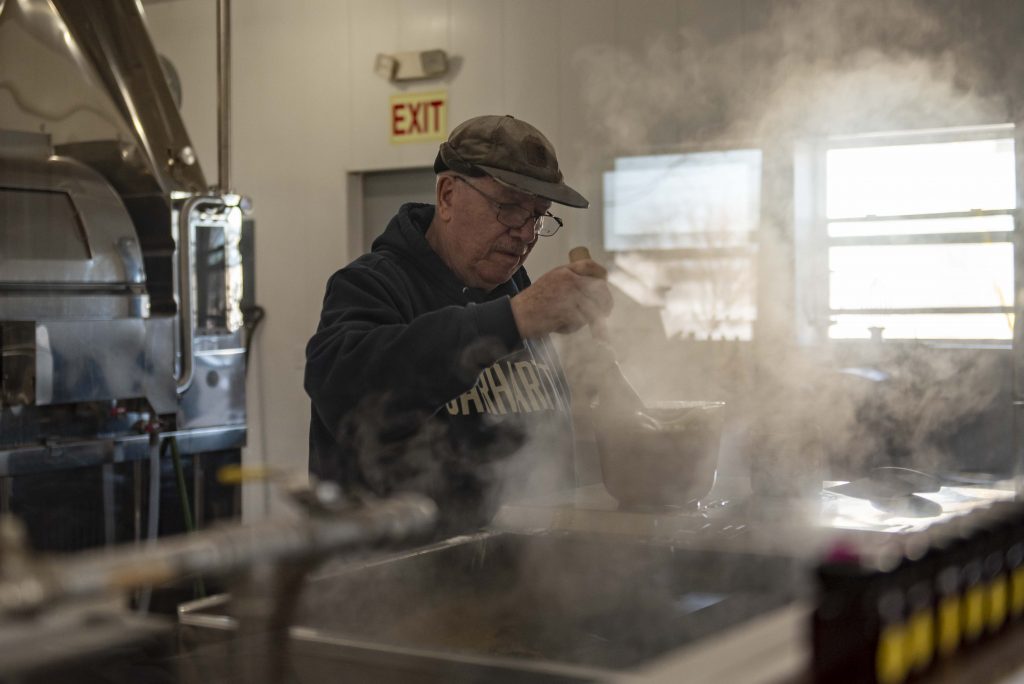 Dave started volunteering with the Sugar Bush when a neighbor invited him and his dad twenty-five years ago. He concentrated on the syrup pouring out of the evaporation pans. Keeping watch of the temperature, he quickly switched out a full bucket with an empty one, dumping the syrup from the full bucket into a holding basin. He moved with precision, his actions automatic after years of hurrying around that room.

Dave and Chris predicted a total yield of ten gallons of syrup from that day’s collection, adding to several hundred so far this season. They gifted me a sample of maple syrup candy and a mini bottle of syrup to take home. 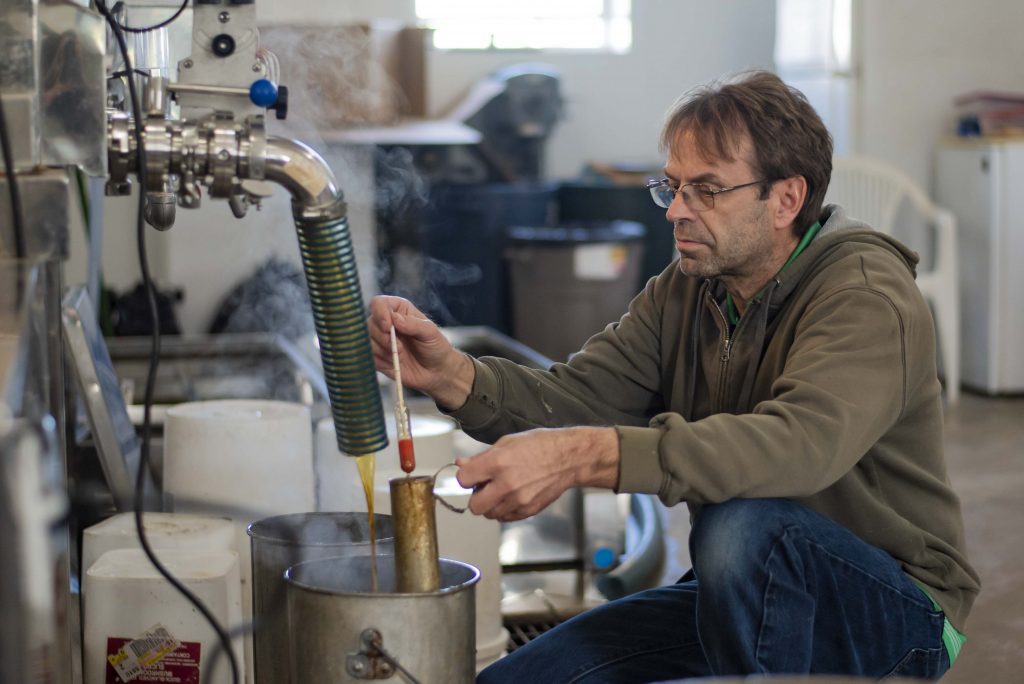 When the COVID-19 pandemic began last spring, the Shepherd Sugar Bush needed to explore new ways to sell their syrup. The excess supply from 2019 and the loss of sales caused by the forced cancellation of the 2020 festival brought them to Amazon, where they now ship syrup across the country. “We package and ship it out ourselves, right here,” Chris said with pride.

The Shepherd Maple Syrup Festival returned this year, albeit on a smaller scale. The pancake supper became a drive-thru, and the craft vendors and amusement rides were absent. Still, the festivities honored the hard work of the volunteers, who bottled 1,140 gallons of syrup for the 2021 season, and the community was eager to celebrate this success. 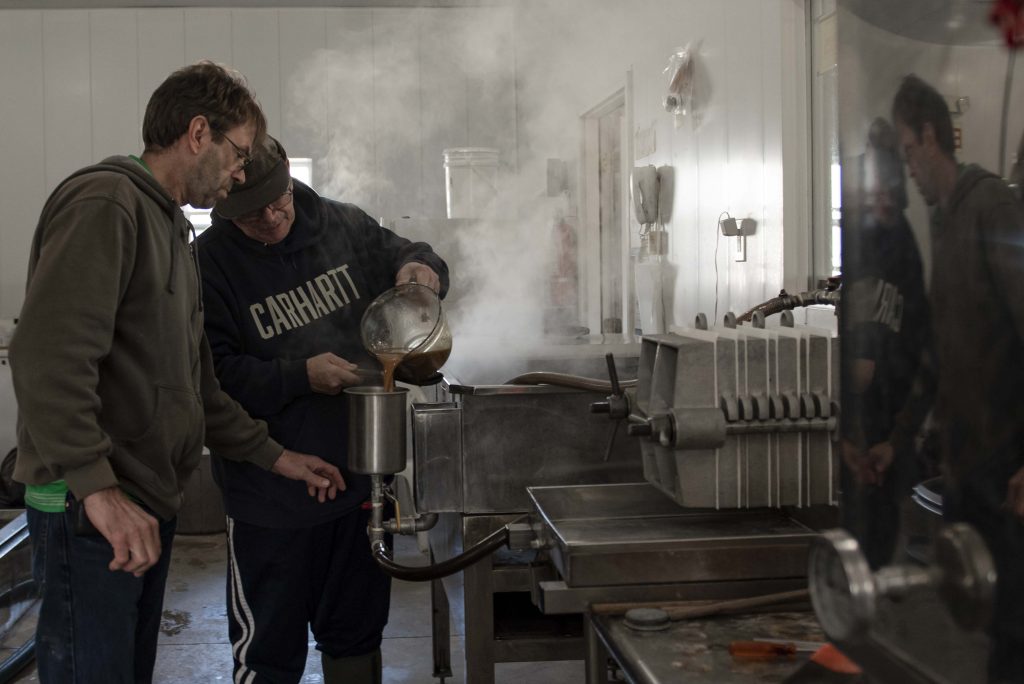 After spending the day in Shepherd with the Sugar Bush volunteers, I met my grandma for dinner in Mt. Pleasant–the largest town near her, just about fifteen minutes north of Shepherd. I told her all about the collection process, the boiler room, and the tractor ride. I clicked through some of the hundreds of photos I had taken. 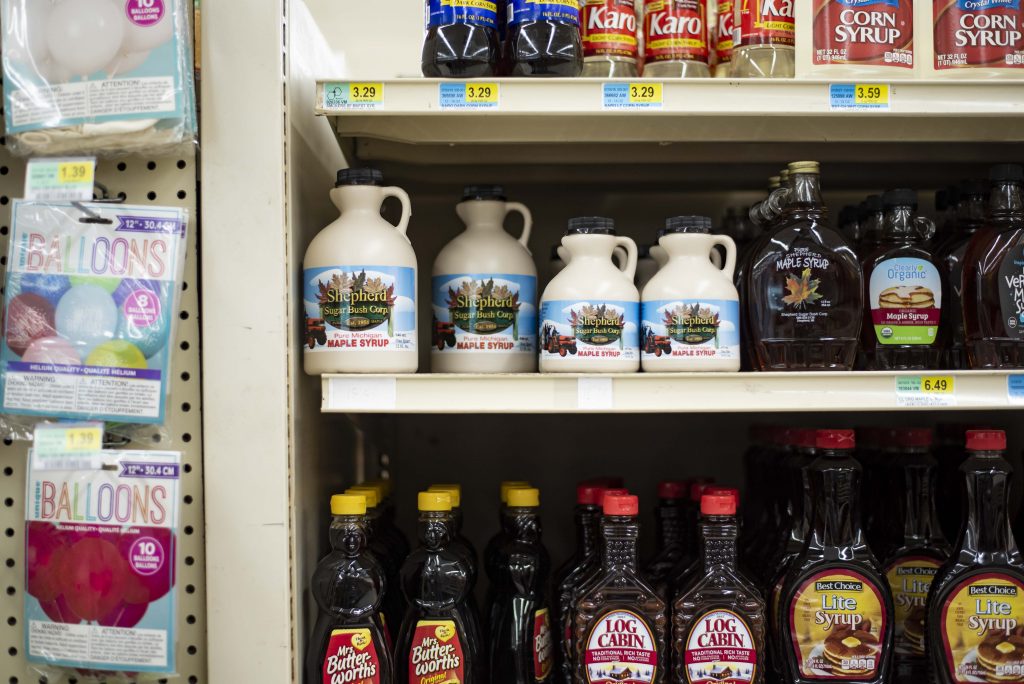 Afterward, we stopped at Ric’s Grocery Store to pick up a few things before leaving town. We moved quickly, but took a brief detour to the breakfast aisle. Lined up on one of the shelves was an array of Shepherd Sugar Bush Maple Syrup bottles. They stood out among the tall, dark brown commercial brands. We removed one of the smaller Shepherd Sugar Bush options from the shelf and added it to our basket. ■

Alexis Rankin is a freelance photojournalist based in metro Detroit. She graduated from the University of Michigan in 2020, where she studied Environmental Science and English. You can find more of her work at alexisrankin.com.