“The Coney Island of the West”

At its peak, Ohio’s Silver Lake Park was a six-hundred-acre amusement park with more than thirty attractions and tens of thousands of visitors per day.


In 1846, Ralph Lodge and his father, George Lodge, were doing masonry on a house near Silver Lake, near Akron, Ohio. After the work was finished, they cooled off by taking a quick swim. Ralph, awestruck by the area’s beauty, expressed to his father how he wished he’d one day be able to buy the lake and a bit of land near it to live off of. Twenty-eight years later, on January 10, 1874, Ralph did exactly that. He purchased the land covered by water for $1,305. Then, the following June, he purchased thirty-five acres along the southwest shore. After another two years of preparations, he moved his wife and family from Cleveland to their new home at Silver Lake.

At first, farming was the family’s main source of income, but soon Ralph saw other potential. He began offering fishing, swimming, and boating to the locals. Then he built a refreshment stand, picnic shelters, and a few cabins that guests could rent. Over the next few decades, the project grew steadily from a fishing and swimming hole into Silver Lake Park, a six-hundred-acre amusement park with more than thirty attractions and tens of thousands of visitors per day known as “the Coney Island of the West.”

In the early days, attendance was so inconsistent that often the refreshment stand didn’t even open, said Ralph’s son, William Lodge. Every now and then, businesses, schools, and churches held events there, but the park’s first real boost in attendance didn’t come until the early 1880s. That’s when the Cleveland, Akron, and Columbus (CA&C) railway built a platform only a mile and a half away from Silver Lake Park in the town of Cuyahoga Falls. Word of the park spread quickly, and visitors began coming from all across the state. Later, in the 1890s, trolley service from Akron would extend out to Silver Lake Park, yet again boosting attendance.

Ralph capitalized on the attention and began adding a number of attractions to the park, including the first dance and dining pavilion in the early ‘80s. Dancing quickly became the most popular activity for guests and the attraction most commonly associated with the park. Local and regional bands would perform there on a weekly basis. Unfortunately, the popularity soon died down, and the dances weren’t even making enough money to pay the musicians. Ralph kept the pavilion open, but the events were much less frequent.

Another popular attraction was the menagerie, which eventually displayed forty animals across twenty species, plus around twenty variations of fish in what is believed to be the first aquarium in the state of Ohio. There were monkeys from Africa, anteaters from Australia, porcupines from Canada, hares from Belgium, and even a North American bald eagle. In 1888, Ralph Lodge acquired two black bears, one male and one female, named Patrick and Topsy. From there, the Lodge family alleged that a new set of cubs was born once a year, nearly every year, from 1892 to the park’s closing. Seventy-eight total cubs were raised at Silver Lake Park. The Smithsonian Institution documented the methods used by the park in a 1904 article titled “A Notable Success in the Breeding of Black Bears.”

The early 1890s brought dramatic expansions to the park, including a miniature railway, which went from the menagerie to the north end of the lake at a relaxing fifteen miles per hour, and the fan favorite water toboggan slide. This type of slide became popular during the Victorian era and was even one of the first rides at that other Ohio amusement park, Cedar Point. The Lodges took a trip to Cedar Point and enjoyed the toboggan so much that they were inspired to build their own at Silver Lake. Guests at the park became quite fond of it. After a few years they built another—longer, higher, and with a steeper incline.

Ralph’s son, William Lodge, took over running the dance and dining pavilion in 1891. He ran an advertising campaign for the dances that was met with incredible success. They expanded the pavilion again, leaving the first floor a large dining hall and adding a second floor entirely for dancing. Also on the second floor, in the rafters, they built a platform for the bands to perform. The gross income for the dances nearly doubled each year, reaching $100,000 by 1896. William Lodge even contracted a ten-piece orchestra for the 1896 season and provided them with a lakefront dormitory.

The pavilion was again expanded in 1898 to feature a larger dance floor, a basement boathouse, and an eight-foot balcony around the second level. The lower level held park offices, check in facilities, an ice cream shop, a barber shop, and a billiard parlor. Then, in 1903, the park’s final pavilion was built. In the end, the dance hall was 70×216 feet. If you included the balcony, it became an astonishing 90×236 feet. The new and improved dining hall now comfortably sat five hundred guests. The largest number of dancers recorded on the floor in one night was roughly twelve hundred couples. Dancing, yet again, became the most favored activity at Silver Lake Park.

If couples exhausted themselves dancing the night away, they could catch a ride on the park’s steamboat. In total, four different steamboats operated in the park’s four decades of service: the Cora, the Will Dailey, the Silver Queen, and the Chautauquan. Adults rode for a dime while children rode for a nickel. The boats traveled up to the north shore to pick up guests that traveled by train, then would head back down to the southwest part of the lake where the pavilion, along with most other attractions, was located. Each successive steamboat was bigger or faster than its predecessor, which would be then be decommissioned. (The most impressive and perhaps unnecessary decommissioning was of the Will Dailey in 1900; the ship was covered in gasoline, packed with fireworks and dynamite, and then blown up in the center of the lake.) The last steamboat, the Chautauquan, driven by Capt. Frank Morgan, launched in 1911 and had a carrying capacity of six hundred guests. 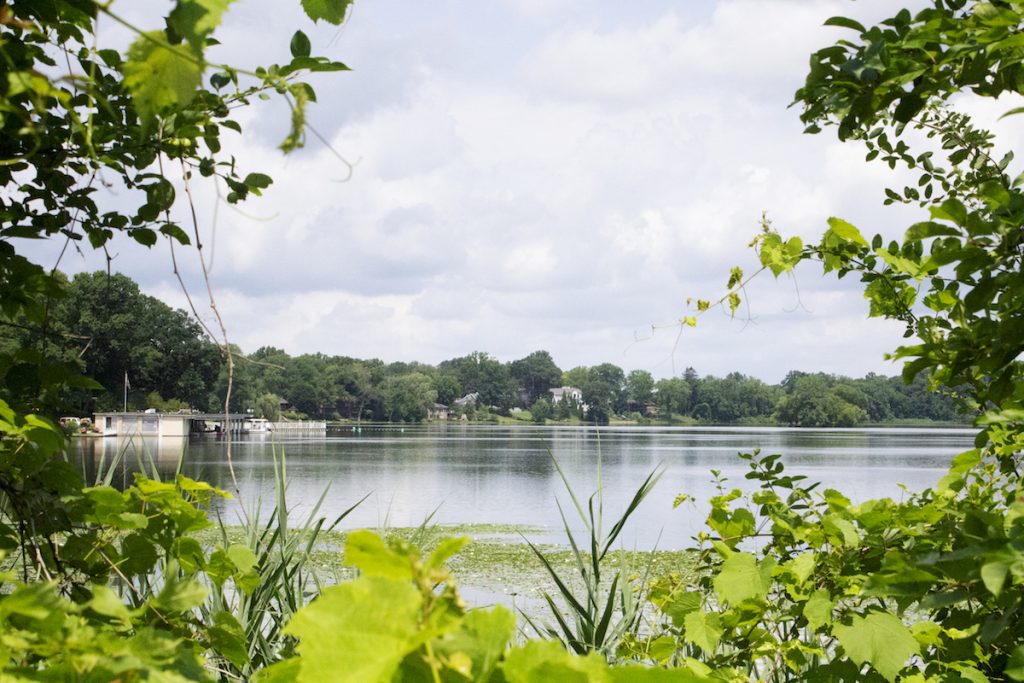 During the park’s peak years, in the early 1900s, it brought in anywhere from ten to twenty thousand visitors a day, employed more than a hundred people, and generated $2,000 to $5,000 per day in revenue. It had its own police force, power plant, water tower, and sewer system. New rides featured a merry-go-round, fun house, pony track, and a figure-eight toboggan roller coaster. There was so much improvement that the park went public in 1902 for $100,000, with a thousand shares of stock valued at $100 each.

Ralph Lodge was named president and treasurer of the Silver Lake Park Company, while his son, William, took the roles of general manager and secretary. As time passed, William Lodge obtained more oversight of the park. In 1904, he decided to build an island in the middle of the lake using old railway tiles and dirt. The island was 120 feet long and sixty feet wide. William’s wife named the island Willisle after her husband. Trees and a single shelter house—formerly a peanut stand—were moved to the island to make it feel more welcoming. To this day the island stands tall and overgrown with life.

Ralph Lodge died on May 22, 1907. William took over all positions and responsibilities that his father held. Business plateaued. Besides an auditorium built in 1908, new additions seemed scarce. That is, until 1912, when the park introduced a sixty-acre aviation field.

There was no doubting the appeal of an aviation field. Pilots flew overhead, demonstrating all types of tricks and maneuvers. Plus, for $25, any guest could hop aboard and be flown over the lake. Sometimes the planes were used for special events, like in 1915, when there was a race between an automobile and an airplane. It took place on the park’s half-mile pony track. Barney Oldfield raced in his car below while DeLloyd Thompson flew around the track above; in the end, the automobile just inched out the plane. On the other hand, some people died or had close calls. In 1913, for example, a twenty-seven-year-old pilot by the name of Charles Carlson plummeted two hundred feet to his death. (Eventually, the aviation field became a fairground.

Meanwhile, the park took a devastating hit. The railroad that had been bringing visitors to the park from far away places was discontinuing excursion traffic and transitioning to freight, moving goods and materials instead of people. When this plan was executed by the railroad company it took out nearly two-thirds of the park’s visitors.

1913 saw the first paved road from Cleveland to Akron. Automobiles flocked to the park, but just as things were looking up: World War I. Young men began enlisting in the military instead of taking their dates to dances or on boat rides. One of the park’s largest target audiences—dancing young couples—disappeared seemingly overnight. By 1917, local men preparing to go to war trained at Silver Lake before shipping off to a military base. They used the pony track as part of their training and even encamped on the land. (The air field had already been decommissioned; after a 1913 flood, the county fairgrounds relocated there for good.)

The war was the final blow for the park. On July 1, 1917, the Silver Lake Improvement Company purchased the Silver Lake Park property for $10,000. The land would be developed into an upscale residential area known as Silver Lake Estates, and later the Village of Silver Lake. The park would remain open for the 1917 summer season, but officially shut down at season’s end. Park buildings were either moved or demolished. Boats, furniture, and silverware were all auctioned off. The majority of the animals from the menagerie were donated to the Brookside Park Zoo in Cleveland.

Today, approximately twenty-five hundred residents call the Village of Silver Lake home. Small parts of what once stood remain scattered around the community—benches, a ticket booth, concrete from one of the piers, and of course Willisle. But, for many, the most important remnant is the house that Ralph Lodge worked on with his father in 1846: the unassuming masonry project that launched the Coney Island of the West. ■

Brandon Meola is a freelance writer born, raised, and residing in Northeast Ohio.

Cover image: a postcard of of Silver Lake Park’s entrance.