The year was 1976. I was a college student going down to US Steel to apply for a summer job. I had never been there before, but it was one of those places that lined the Mahoning River, over which I had driven a million times. Mr. Manche, a close family friend, worked in the employment office and had some pull when it came to hiring. I was only 19. My friends were getting minimum-wage jobs cutting grass and painting houses. So moneywise, this was a coup.

I had no responsibilities in those days. My biggest decision would be choosing the number of dependents I would claim on the hiring form. It would be zero or one, and all I knew was that it had something to do with income tax refunds.

“Drive an old car down there,” Mr. Manche told me. The massive parking lot to the Ohio Works of US Steel, on Youngstown’s near-west side, was a perfect landing spot for the airborne contamination generated by the mill. The automotive paint was no match for the corrosive nature of the emissions, which is why most people had a “beater” car they used to drive there. 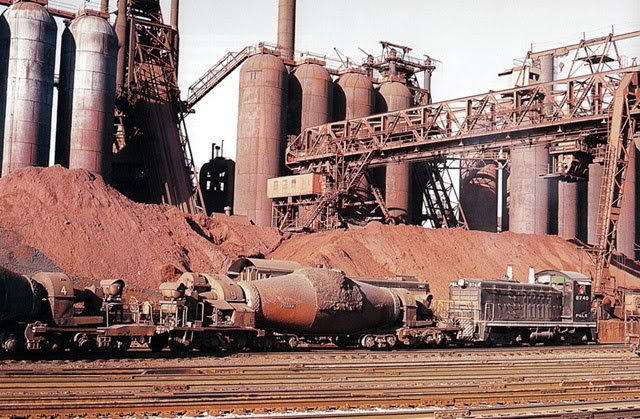 I had given myself extra time to find everything because the street signs were covered with an orange crust that made them unreadable. The hue perfectly matched the color of the hot molten steel that bubbled inside the open-hearth furnaces, I would learn. The guard at the entrance registered me and pointed me in the direction of the employment office. When I arrived there, Mr. Manche, a man of diminutive stature, was running around the office. “I was six inches taller when I started here,” he quipped. I filled out the application and put zero deductions. After my medical examination, I was directed to the onsite company store, where I bought steel-toed boots. An older man, wearing bulky pants with a matching green jacket, came in. He noticed me looking at his strange looking outfit.

“It’s made out of asbestos,” he said. “There are some places around here that get hotter than hell. These keep you from catching on fire. You’ll see.”

A week later I retraced my route for my first day on the job. When I arrived, there were a half-dozen people gathered in the employment office: five guys and a woman whose name I cannot recall. I’ll call her Martha. She was swimming in the smallest work jacket she could find, and her helmet was way too big for her head. The mill-issued safety glasses barely stayed on her face. Two of us were college kids; the others, including Martha, hoped to make a career of it. The mill had been around for almost a century and no one believed it would ever close.

A short, stocky man, with a black handlebar moustache greeted the new hires. “My name is Leo,” he said. “I’m your foreman. I run the mason gang. Follow me.”

The property went on for hundreds of acres, and Leo pointed out key buildings on our trek, including the blast furnace and open hearth. With a few exceptions, they were made out of sheet metal and broken windowpanes. Two cats ran by, chasing each other.

“Why are there cats down here?” I asked.

“They kill the rats,” Leo said.

Although my family had a long history at the mill, this was my first glimpse into their world. I was awestruck.

“There’s the commissary,” Leo said. “Not much there, just some vending machines. If you get asked to double-out, we’ll give you tokens so you can eat supper. That other one’s the clinic. We get bonuses for safe work days, so try not to go there.”

We all nodded. To Martha, he said, “We don’t have a ladies locker room out in the mill, so you’re going to have to share the one in there with the nurses.”

Being singled out appeared to make Martha uncomfortable.

“Any of you ever work in a steel mill before?” he asked.

“No,” was the collective response.

Nodding our heads, we headed toward the furnaces. “There’s one guy here, name of Wilson. I’d fire the son of a bitch if the union would let me. His crew’s with us today, so remember, unless I told you to do something, don’t do it. Some of these idiots make a game of it.”

We went down to a sublevel of the large, open-hearth building. Even though it was daytime, the darkness required bright lights powered by gas engines. The air was cool despite the summer temperature up top. The work was already in progress. Outside the furnace were at least a dozen pallets of bricks.

He explained that the furnaces were made out of special fire brick and had to be torn down and rebuilt on a regular basis. Because the masons needed to get into some tight spaces, each one had two helpers. One was outside of the space loading the bricks onto the roller belt, and the other was inside taking them off.

We’d attracted the attention of the veterans who looked over the new employees. A tall man wearing all denim finished snipping off the metal bands that held the bricks onto the palettes. He came forward, pointing the large pair of cutters at the foreman. “Hey Leo, where’d you get these guys?” he asked.

“I don’t know, Wilson,” the foreman said. “You’d have to go ask Personnel.”

Wilson approached me. “You. Who’s your father?”

The question put me into a bind. My father had died when I was young, but my last name was well known. Since the Depression, my grandfather, followed by my Uncle Joe, were general foremen of the open hearth. Currently, my uncle ruled the place with an iron fist. I saw him off to the side, watching the work, his red hair poking out from under his gold helmet. He knew the culture better than anyone, so he kept his distance to protect me.

“My dad is dead,” I replied. I was not going to give this guy ammunition to use against me.

Wilson shrugged and walked away.

I understood the comment when I saw the bricklayers down on their padded knees in the crowded spaces. Leo assigned us to our posts. Well into the first pallet, I knew the hard and steady work was going make my arms ache that night.

The crew’s world revolved around break time and, God forbid, you break the unwritten rule and work through one. At 10 a.m., most of the crew walked off for a smoke or a shit or both. Not surprisingly, Wilson was the first to take a break and the last to return.

Martha was positioned inside the furnace. Her mason had finished and was on his way to the restroom. Wilson watched her working.

“God damn bitch, taking a man’s job,” he said to no one in particular. 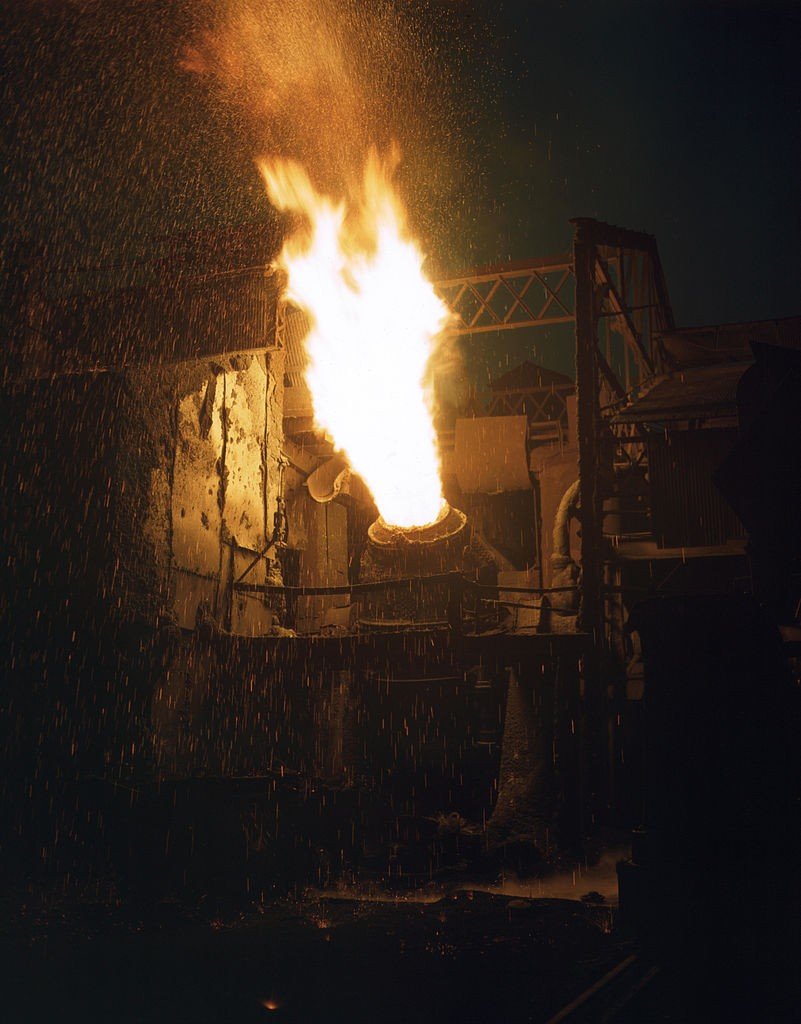 When Martha’s partner took his break, Wilson walked over and replaced him. She was unloading the last dozen or so bricks from the transport. Wilson picked up a pair of bricks and sent them down the rollers to her, a clear deviation of workplace routine. She didn’t notice that someone else was sending her brick, and kept stacking past 10 a.m.

Wilson picked up the pace. Instead of setting the bricks on the rollers and letting gravity do its work, he started pushing them, accelerating their arrival. In pairs, the bricks hurtled into the furnace. The increased speed caught her off guard, and one of her oversized gloves got pinched between two bricks. She turned to look back at the start, noticing Wilson for the first time.

A single mother of two, Martha was physically soft and without muscle tone. Her safety glasses were crooked on her face, perspiration causing them to slide off her nose.

She glared at Wilson through her thick, fogged glasses as she sped up to match his pace. The rest of the crew began noticing what was happening. Their chatter silenced as the challenge played out. The pallet was two-thirds empty as Wilson increased his speed. Barely able to keep up, she assembled the stack around her.

Smelling blood in the water, Wilson re-committed his efforts. The clanging of the bricks on metallic rollers grew louder and more constant.

Martha was bent at the waist, working in the confined space. Twisting from right to left, she was running out of room to stack any more. She looked over at the work area next to her, saw the men had left for break, and quickly switched sides of the conveyor. Within the larger space, she was able to spread her feet and work freely. She started building up the pile for the absent mason. This only served to motivate the muscular Wilson. His efforts were intentional and mean as he stepped it up.

Like a machine, she began to outpace Wilson, never allowing the bricks to back up on the rollers. On occasion she would slap her hands together with her oversized gloves, like a baseball catcher, eager for a pitch. Leo watched, along with 60 sets of eyes, all of us willing her to continue.

The breathing and sweating of the two warriors escalated. Martha unsnapped her jacket, exposing red suspenders that held up her pants. The pallet was near empty and everyone knew this meant survival to her. No matter what she had faced in her life so far, she had made it to this moment, and no one was going to take it away from her, certainly not this jackass. 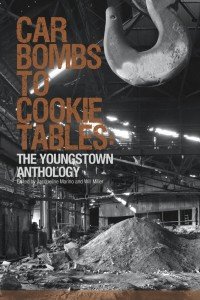 With 10 bricks left on the palette, it was clear Martha had won. Eight, six, four…Wilson shoved the last two bricks toward her as hard as he could. When she unloaded them, Leo spoke up.

Wilson lit a cigarette and strutted away, acting like he had only been doing his job.

Martha walked out of the furnace and removed her gloves and hard hat. The red bandana wrapped around her head was soaked. She wiped her face and neck with it, never making eye contact with anyone.

Wilson did not ask anyone to do his work for him that day but he did the next.

On our first payday, Leo handed out the checks. We newbies had no idea what to expect. I was shocked when I opened mine and thought of buying my friends a few rounds of beers. Martha looked at hers, turned and spoke her first words to me, “Now I can feed my family.”

At the end of the summer, I went back to college with newly chiseled bricklayer’s arms, pockets stuffed with cash, and Martha’s payday declaration etched in my mind, like a mason’s trowel gashed into drying concrete.

Martha and Wilson stayed behind.

Tom Kerrigan is a retired sales executive. Born and raised in Youngstown, he wrote and directed a 10-minute play, The Intruder, in the inaugural Ten Tucky Festival at The Bard’s Town Theatre in Louisville, KY. He is currently writing a novel.

“Steel Grit” is included in Car Bombs to Cookie Tables: The Youngstown Anthology, which, along with other Belt publications, an be purchased here: https://beltmag.com/shop/.