Stephen Hobbs: On South Africa and the Rust Belt

South African artist Stephen Hobbs has called his home of Johannesburg “a complex space of uncertainty and contradiction” — terms that clearly apply to many Rust Belt cities such as Detroit, Cleveland, and St. Louis, all of which the artist visited during an autumn lecture tour of the US. “My art isn’t invested in the city; my art is the city,” Hobbs has insisted, viewing himself more as an “arts provocateur and practitioner” than as a traditional visual artist. Using printmaking, photography, sculpture and mixed media installation, Hobbs calls attention to the precarious state of cities undergoing radical physical change, focusing particularly on Johannesburg’s architecture and the impact of its defensive urban planning.

I had the opportunity to take him on a tour of North St. Louis in October, and our visit to the site of the now-demolished Pruitt-Igoe public housing complex provided the basis for one of my columns in Washington University’s The Common Reader, which examines the rhetoric of space in the city. Hobbs and I continued our conversation via email over the following month, focusing on issues exigent to both Rust Belt and South African urban decline and renewal. An edited version of that exchange follows. 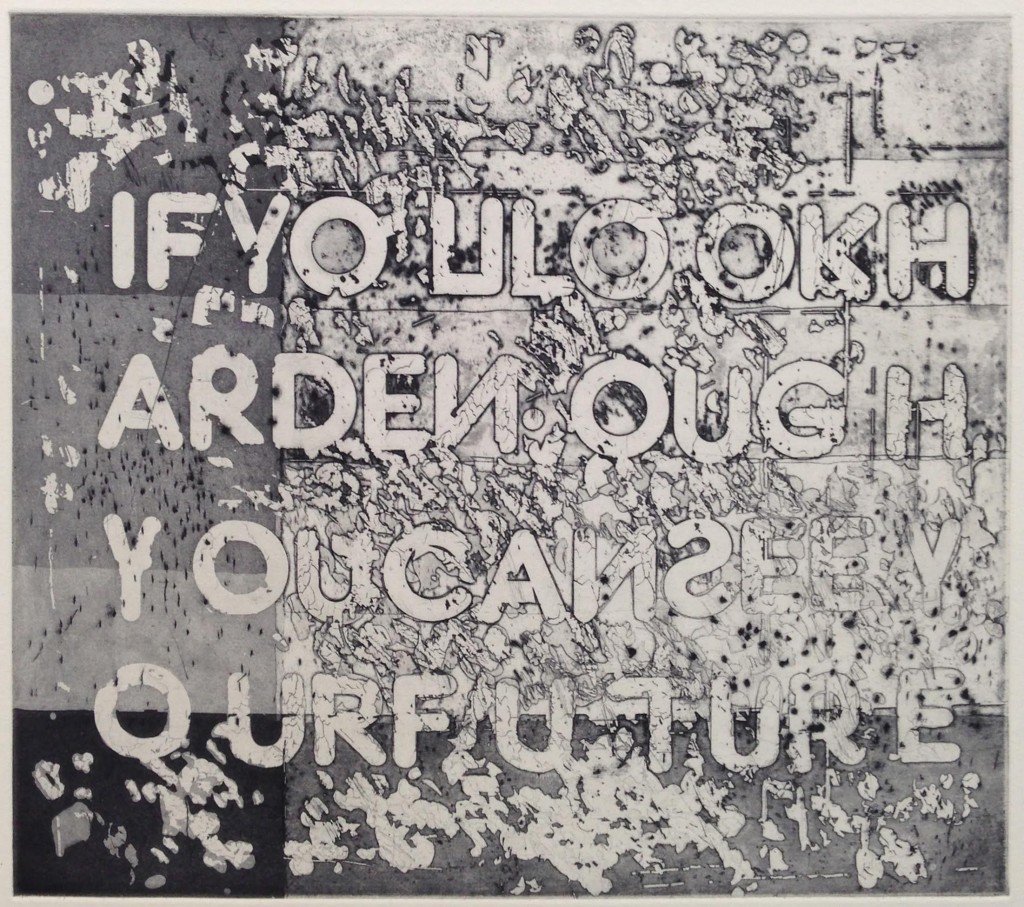 If you look hard enough you can see your future. Etching; 2015

BELT: In your own words, your work is largely dedicated toward “translating conceptions of orientation through photographic and mapping techniques.” How during your visits to Detroit, Cleveland, and St. Louis did your sense of pedestrian and spatial orientation shift from Johannesburg?

Hobbs: The particular qualities of Johannesburg, a former colonial mining town, turned apartheid city, turned African city, have very specific layers that one learns to read over time. The impact of this level of political transition and physical and social change in such a city imprints itself on one’s psyche to the extent that other cities in transition almost seem to pale in comparison.

My affinity for urban decay as a marker of economic and social decline, as well as a visual prompt for the imagination to conceive of newness grafted onto the “decay,” remains a constant theme in my work. The layering that I’ve referred to therefore leads to a constant process of self-orientation, through grappling with a multi-lingual country such as South Africa with myriad cultural practices and differences.

During my time visiting the Rust Belt, the primary orientational anchors relative to my interests in decay were rooted in the postindustrial collapse of these cities. The lack of any substantial population densities, and therefore evidence of varied uses of these spaces, left in part the collapsed buildings as the main spectacle. 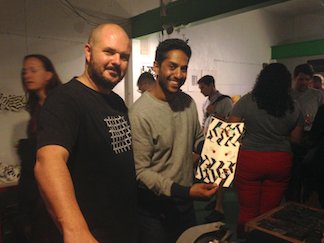 BELT: Many Rust Belt cities are fraught with histories of racial segregation — practices never as explicit as apartheid, but which nevertheless wrought disastrous effects upon black populations (for instance, in St. Louis, racial deed covenants and other restrictions relegated blacks almost exclusively to a few north-side tracts, the old industrial suburbs on the Illinois side, and scattered outposts like Kinloch in north St. Louis County). During our tour, we witnessed within two miles, the shift from architectural grandeur to apocalyptic neglect. How, from your vantage point, do contradictions in the Rust Belt manifest themselves? Did these topographical contradictions ever seem particularly complex, or did they feel predictable?

Hobbs: I was awestruck by the vastness of the decline in some of these cities. Detroit’s scarred and seemingly very vacant suburban sprawl alone evinces the sheer magnitude of the motor industry’s impact on the city’s economy and labor dynamics over the decades. The key point of comparison between all three cities relative to Johannesburg (for me) was the absence of any critical mass of people exploiting these gaps. By 1994 recurring images of bricked-up buildings and “TO LET” signs throughout downtown Johannesburg were very disconcerting, but within a very short span of time, a lot of this vacancy was “skwatted,” and in some areas of the city lead to serious slum conditions which still exist today.

Similar parts of Detroit, Cleveland, and St. Louis are ghost towns in comparison. South African policies of separate development manifested in township settlements on the periphery of central Johannesburg, which meant that a massive change in the ownership and user dynamics of Johannesburg would unfold after 1994.

The remains of Pruitt-Igoe, St Louis. The area became plagued by drugs and violence, and after the entire building complex was demolished, a giant urban forest grew up in its place. [courtesy Stephen Hobbs]

BELT: “Urban regeneration” and “renewal” are tossed around a lot in St. Louis (and surely Detroit and Cleveland), but often mean resources are directed at urban cultural centers, parks, and tourist destinations more than an actual “new” city space. How do you see “renewal” or “regeneration” happening in Johannesburg? Any successes — or failures — from which the Rust Belt might learn?

Hobbs: I was amused to see that the vocabulary of urban renewal, in the form of repaved sidewalks, urban furniture, new trees and lighting, converted warehouses, enlivened waterfronts and fresh produce markets, etc., is no different than in Johannesburg.

As co-director of the Trinity Session (our collective arts project started in 2001), we have been directly involved in small-, medium-, and large-scale urban design and public art initiatives in a number of cities in South Africa. The urban regeneration briefs we work with are very similar city to city, and seem to be so in our travels in the UK and the US.

In the 2000s the emphasis behind many of the projects was on important political heritage sites — for example, Vilikazi Street, which was at the heart of the 1976 student uprisings in Soweto and home to Nelson Mandela and Desmond Tutu, or on significant city gateway and placemaking objectives with large scale sculptures aimed at positioning Johannesburg as a world-class African city. This rhetoric is complex and complicated as, in a lot of instances, the extent of city dependence upon private sector support results in over-policing and surveilling of what are intended to be public facilities.

[blocktext align=”right”]During my time visiting the Rust Belt, the primary orientational anchors relative to my interests in decay were rooted in the postindustrial collapse of these cities.[/blocktext]Our most engaging work has occurred in contexts in which urban upgrades with arts budgets lead to very elaborate workshop and storytelling processes centered around the residents themselves, which in some townships is measurable by several generations. Hence insights into personal histories and collective community narratives go a long way towards unpacking South Africa’s various histories — which in turn guide the designing and building of temporary or permanent art projects in the public realm.

BELT: Many hoped the 2010 census would show a plateau or even reversal of city depopulation in St. Louis, but in fact it showed an 8% drop from 2000. I often wonder if the expectation of “growth” was due to there seeming to be a rise in “more things to do” in the city that, quite plainly, didn’t indicate “more people who live here.” In other words, just because there are more people doing things in an area doesn’t mean more people are doing these things near their homes. If Johannesburg has seen its own white flight, are there goals to get white people back in the cities?

Hobbs: If, say, for the past eighty years a neighborhood in Johannesburg has been built up around the accommodation required to house migrant labor for the gold mines, and within a very short space of time witnesses its attendant empty factory buildings converted into commercial residential, with a street-level retail and cappuccino culture, one has to ask from a traditional cultural perspective the relevance of such imports. Arguments in favor of this formula welcome such economic regeneration as the cities’ vacant spaces are brought back to life and are managed, all the while the lower-income bracket is potentially priced out of its own neighborhood.

The obsession with urban regeneration leaves in its wake a litany of “if you build it, they will come” mixed-use, artist-lead cultural precincts and the like. Urban degeneration tends to happen very quickly whereas urban regeneration requires complex re-visioning strategies with equally complex ground-based engagements and reconfigurations. 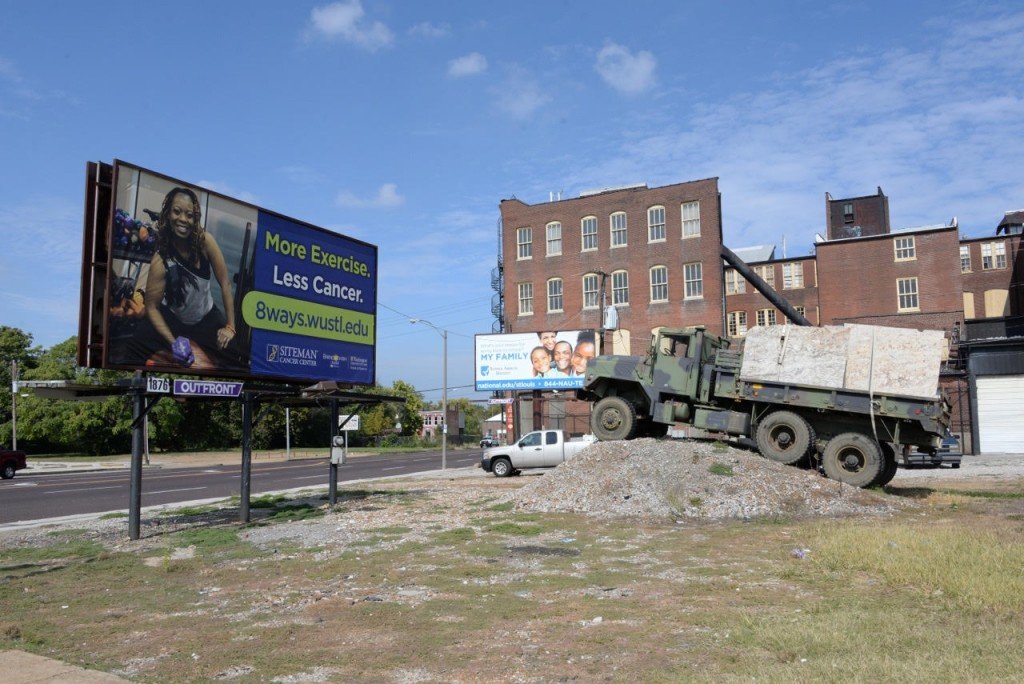 BELT: When I first asked you what most surprised you in Detroit, your answer surprised me, as you said, “Nothing really surprised me in Detroit.” And then later on that eve — and even more so after our St. Louis tour — you admitted that your perceptions of Detroit, of Cleveland (and — extrapolating here — the Rust Belt in general?) were more mercurial when leaving St. Louis, that it was even a bit overwhelming how quickly you might be reassessing your first conclusions. Is it possible that the Rust Belt sequence could itself perpetuate a feeling of predictable decline, elision, and fracture, even though your own city — Johannesburg — is so anomalous culturally that it remains less predictable to you, a native? I’m not sure I’ve never met anyone who’s said, “My own city is stranger to me than this city in which I am a foreigner.” It’s a fascinating disjunction between “strange” and “predictable”.

Hobbs: Indeed, what is to be celebrated and learned is how culturally rich South Africa is, given that I look for contradiction and decay and that political and operational dysfunctionality is omnipresent, but also because my personal artistic interests center on the “vulnerable” body in space mediated through architectural and spatial readings of urban situations and conditions.

My sense of the contradictory nature of South Africa is found in instances where South Africans can be the friendliest and most welcoming of people and yet our crime statics paralyze our ability to move freely in society. Consequently our ability to learn from each other is denied by pervasive fear and projected racism, if not literal hate and separate thinking.

___
Eileen G’Sell’s cultural criticism and poetry can be found at Salon, Flavorpill, The Rumpus, Playspace, Boston Review, DIAGRAM, Conduit, and the Denver Quarterly, among others. She currently teaches rhetoric and creative writing at Washington University in St. Louis, and hip-hop poetry through the city’s North Campus program. Her book Portrait of My Ex with Giant Burrito is available from BOAAT Press.