Storming The Beach At Conneaut – A WWII Reenactment

Spectators gather early in anticipation of the 3 p.m. battle.

Mothers and fathers, girlfriends and boyfriends, middle schoolers and babies amble toward the beach in the early afternoon hours of August 23. German soldiers wait, crouched in foxholes dug in the sand along the 250-yard beach. The American, Canadian, and British soldiers are not yet in sight.

“Your task will not be an easy one,” booms a voice from a nearby loudspeaker, reciting Eisenhower’s message to the Allied troops. “Your enemy is well-trained, well-equipped, and battle-hardened. He will fight savagely.” 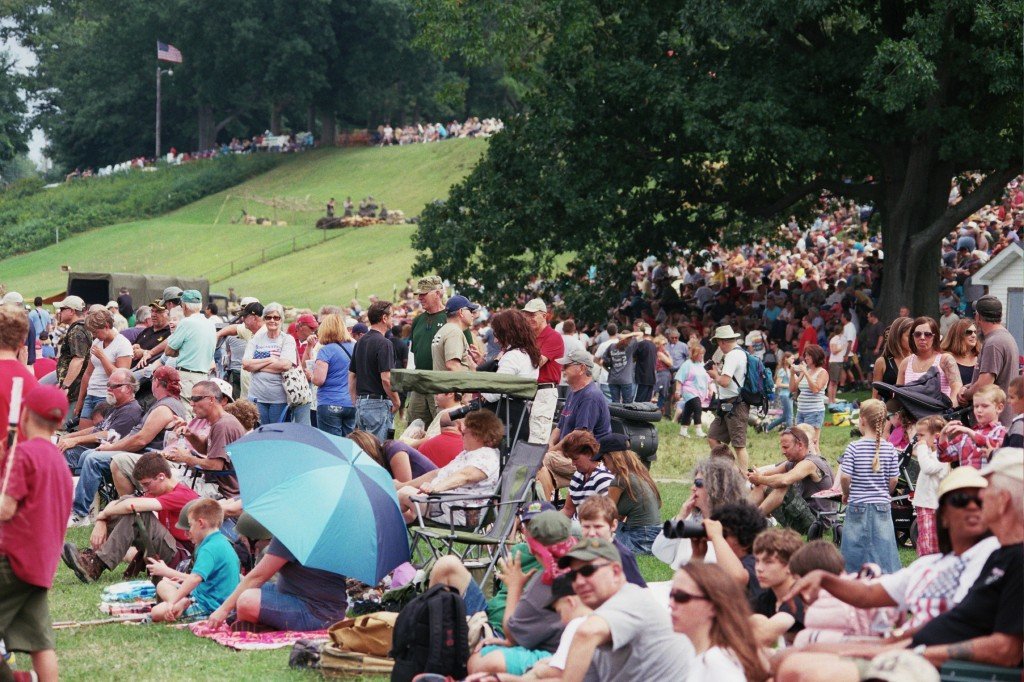 The heavy sense of expectancy dissipates as P-51 fighters and a B-52 bomber race across the sky, leaving trails of white smoke. Cheers erupt as Allied soldiers approach the beach aboard landing craft and storm ashore.

The steady rat-a-tat-tat of gunfire echoes for the next hour, as the Allied forces attempt to reclaim France from Nazi occupation. The spectators — 30,000 in all — watch in excitement, even though everyone knows exactly how this battle will end. The Allies will take Normandy. Then, they will liberate France. Later, they will win the war.

But for now, all are riveted to this recreation of D-Day taking place on a warm and muggy beach in Conneaut, Ohio. Seventy years and 3,700 miles away from the original battle for Normandy, wide-eyed children and adults hold out iPhones to snap photos of the action and point to the sky when fighter planes race by.

D-Day Conneaut, now the largest D-Day reenactment in the country, began in 1999 when a small group of reenactors at Conneaut Park recreated “Operation Overlord,” the code name for the 1944 Normandy operation. The annual event was not made public until 2007 and was later moved to Conneaut Township Park, just north of State Route 531. D-Day Conneaut is funded entirely through donations. Its organizing staff and participating reenactors are unpaid.

Over the last five years, D-Day Conneaut has expanded the weekend program to include a combat scenario and evening of musical entertainment on Friday, but the main draw continues to be the recreation of the D-Day beach landings on Saturday afternoon. Cars bearing license plates from Texas, Michigan, Minnesota, and Canada reveal the scope of the event’s draw. 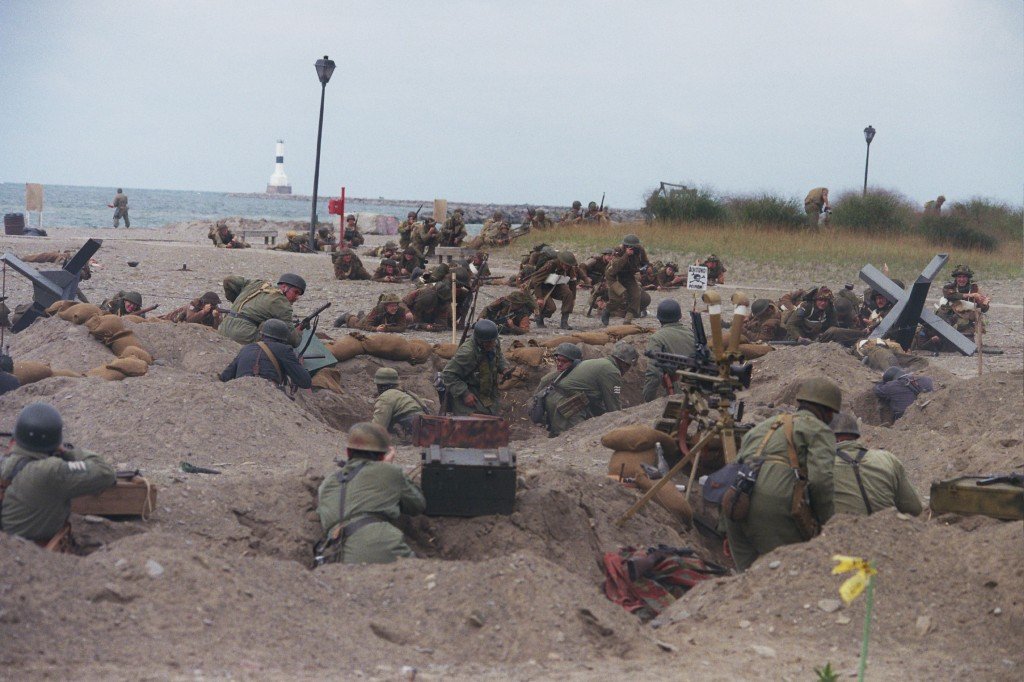 Though it seems unusual that a reenactment of this magnitude should be held in the northeastern Ohio city of Conneaut (“Ohio’s sharpest corner”), the beach in Conneaut startlingly resembles those of Normandy, especially the grassy bluffs that overlook the shore. “I was recently in Normandy, and I couldn’t believe how much it looked like Conneaut,” says a reenactor to a group of visitors from eastern Pennsylvania as they wander near the beach.

On Saturday morning, reenactors mill about Township Park in outlined zones. A Union Jack flapping in the breeze denotes the small canvas tents of British soldiers; a sign at the entrance to an encampment under a canopy of trees reads “Occupied France.” Nearly a mile from the main entrance, in a shady grove at the bottom of a hill, lies the Axis camp. “Wilkommen!” a sign reads. “Mit Tanne und Eichenlaub! Die 100 Jager Division.”

Most Conneaut reenactors and many attendees have familial connections to World War II. “This isn’t putting on a costume for a weekend,” says Mike Blazejack, who honors his ancestry by portraying a Polish pilot. “This is total respect and honor.” When asked if he is hot wearing his historically accurate wool uniform, Blazejack replies, “If those guys could wear it from ’39-’45, I can do it for two days.” 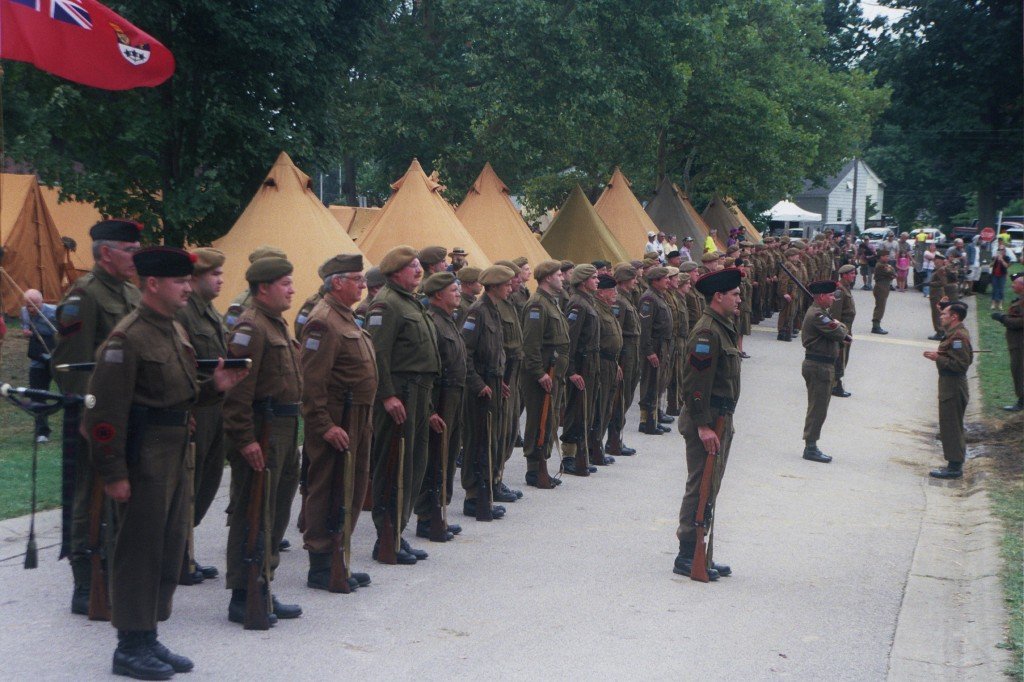 At noon, three hours before the main battle, a crowd circles an open field in “England” for an Allied parade. A bagpiper leads a troop of soldiers, two by two, into the middle of the crowd. The soldiers face a large flagpole and stand at attention. As “The Stars and Stripes Forever” plays tinnily over a loudspeaker, two kids in tie-dyed T-shirts and soccer shorts sip lemonade. A bugler plays “Reveille.” Reenactors raise the American flag in front of a nearby performance stage that seats several World War II veterans and their families. As the national anthem is sung, a group of three Boy Scouts from Troop 93 stand shoulder to shoulder. At the last verse, a Boy Scout surreptitiously reaches into his bag of pink cotton candy and slowly brings a piece to his mouth.

A ceremony commences to honor Raymond Woods, of Ottawa, Ohio, who served aboard the USS O’Brien on D-Day. “Mr. Woods, to show its eternal gratitude, the government of the French Republic has decided to award you the Legion of Honor,” says the French Consul Honoraire, atop the stage with Woods. “The award of France’s highest honor is most appropriate for someone who helped liberate France’s soil. How appropriate that we honor you today, in part for your service on the beaches of Normandy, at this wonderful celebration of D-Day on the beaches of Conneaut.”

Doug Woods stands in the grass a few feet from the stage, watching. Woods says his father, who’s in his 90s, has known that he was to receive the honor since the beginning of the summer. “They wanted to send him to Normandy, but he couldn’t make the trip,” the younger Woods says. “So they came to Conneaut.” 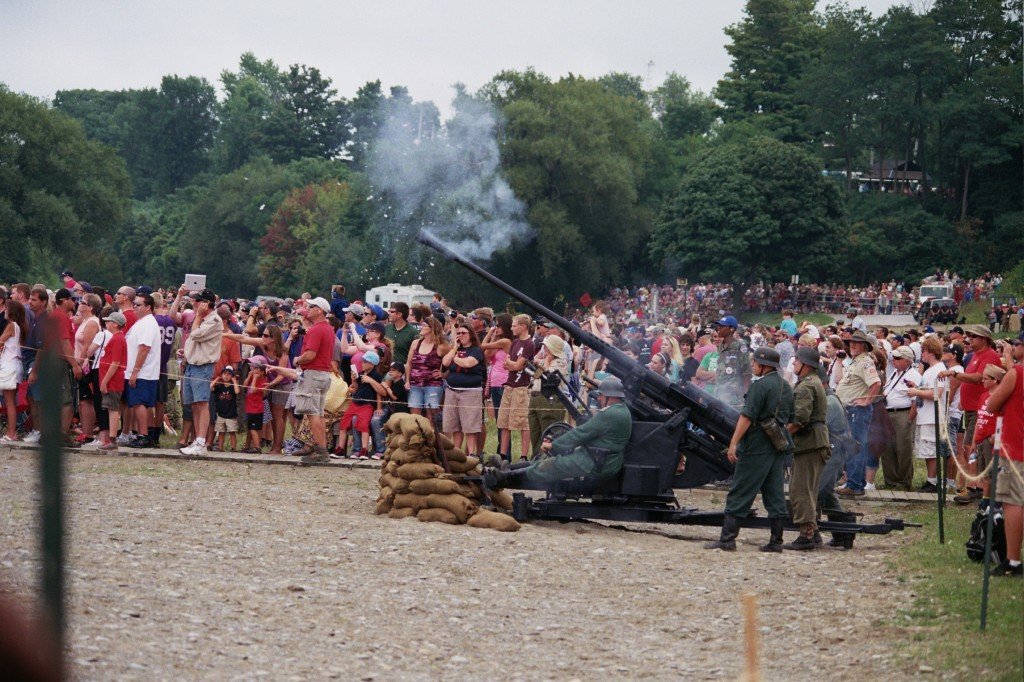 Spectators spend much of the afternoon wandering between campsites to chat with reenactors, visiting tents that sell period clothing and memorabilia, and patronizing concession stands. Three girls in polka-dot dresses, their lips painted red, hold wide-brimmed hats in their hands as they wait in line at Indescribable Kettle Corn. Nearby, Bubba’s Hunky Kitchen serves halupky and schnitzel. Across the way is a small Dairy Queen stand where, beneath a Rosie the Riveter poster, a man in a short-sleeved white button-down shirt, white pants, and an old-fashioned soda-jerk cap sells Dilly Bars.

[blocktext align=”left”]“That gets me every time,” he says with a smile.[/blocktext]The concession stands bring a dash of county fair to the reenactment space; in a park divided into 20th-century Allied and Axis camps, this area is decidedly 21st-century Ohio. Yet, once an hour, a thunderous boom from an authentic Sherman tank jolts everyone back to 1944. Frank Hilliard, a U.S. Army cook from 1953-1955, wears his old dog tags around his neck as he stands beside a booth that sells custom-made facsimiles (“Dog Tags for Vets, Lovers, Fantasy, Pets, Child ID,” the sign reads). At the sound of the tank blast, Hilliard jumps, startled. “That gets me every time,” he says with a smile.

Solemnity and festivity go hand in hand at D-Day Conneaut.Organizers face the task of commemorating a day that saw great loss of young life, but was also one of the sweetest victories in U.S. military history — a day that, in some respects, represents the United States and its allies at their best. And of course it is daunting to recreate a battle that is not yet in the fully distant past. World War II veterans, though smaller in number now, are still a presence. They are still the parents and grandparents of many. 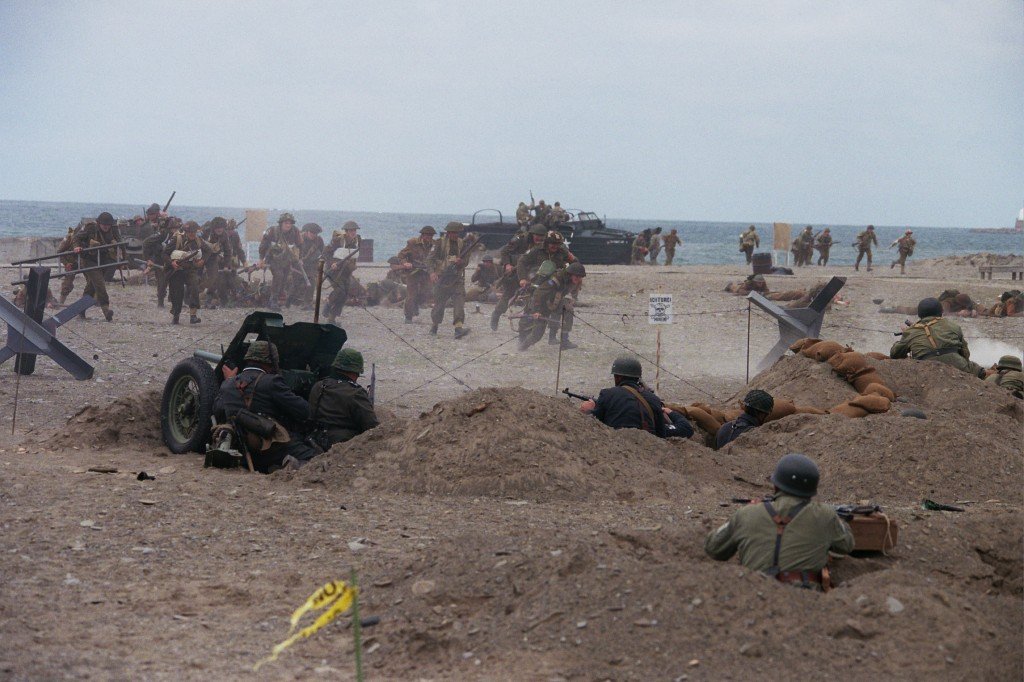 Though more than 135 World War II vets are in attendance today, some, like Joe Paull of Westlake, Ohio, are aware of D-Day Conneaut but choose not to attend. Paull didn’t participate in D-Day, but fought in Europe beginning in December 1944. “I was 18 years old when I was on the front lines. I saw people killed in front of me. I’m sure I killed people with my rifle,” Paull says. “It’s something you can never forget and you don’t want to deal with it unless you absolutely have to. Those poor sons of guns at D-Day had the roughest part of it. I can’t watch even movies about wars. Saving Private Ryan was the stupidest thing I ever saw in my life.”

An even greater challenge lies in accurately and fairly representing German troops. There are no swastikas to be found in the Axis camp, only the occasional – and less recognizable — black and white SS insignia on vehicles and armbands. Axis reenactors, like all good reenactors, are committed to authenticity in garments, weapons, and speech, but most are mindful of the fact that they represent a group loaded with emotional triggers.

Two middle-aged women move throughout the Axis camp attempting to communicate with reenactors in German. They know only a few German words, however, and recite them as they say goodbye to a group of soldiers. “Auf Wiedersehen!” “Achtung!” one woman says as she exits the camp. “Sieg hiel!” As soon as this last exits the woman’s mouth, a reenactor quickly steps to her side. “We actually don’t say that,” he tells the woman.

Axis reenactors generally stay in their own camp until the main battle, choosing not to wander around the park like their Allied counterparts. “They’re good guys,” says Greg Ruess, who portrays an Allied combat photographer. “They’re all Americans. They just do their own thing.”

Charles Orr, a veteran of the Vietnam War, makes his way from tent to tent in the Axis camp. Orr’s denim jacket is covered in patches memorializing his time in service from 1969-1970. “I wouldn’t talk about Vietnam for years, and now I can’t shut up,” he says. Orr attends reenactments because they are usually filled with veterans of different wars. Many reenactors themselves have served in the military. “I feel safe surrounded by vets,” Orr says.

By 3 p.m., the scheduled start time of the Normandy reenactment, most of the encampment sites are empty. Reenactors have taken their positions near the beach. Spectators stand inside roped off areas on the beach and on the grassy bluffs above.

Rifles, machine guns, mortars, and cannons are all fired during the battle, though use of real ammunition is strictly forbidden. Still, the steady pop-pop-pop and bratatat of weapons sounds authentic. 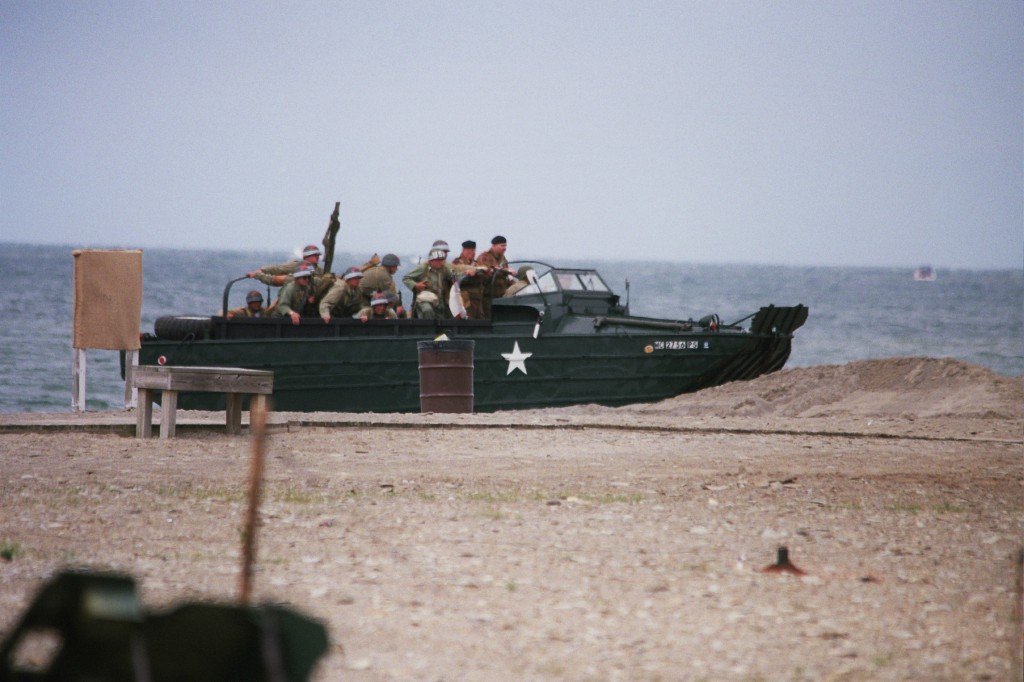 Two men sit atop an army green communications truck, narrating the battle as it unfolds. Their commentary is broadcast over speakers throughout the park. “Whoa, they sure are after them, aren’t they?” they remark as the battle heightens in intensity.

Standing at the top of a hill are Dora and Ken Hemphill. They wear white T-shirts with custom printing on the backs:

The Hemphills had their shirts made to honor their fathers. “This day helps to give people an idea of what their fathers actually did,” Dora says. Her eyes fill with tears. “The older I get, the more emotional I get.”

She mentions a sign at the entrance to Township Park that reads, “Thank you to our veterans past, present, and future.” Dora pays attention to the word “future.”

“This day might give young people the incentive to serve,” she says.

Nearby, a red-headed boy, not yet used to balancing on upright legs, rests his arms on his stroller as he stands unsteadily on the grass. A bomber races overhead. “Look! Look!” his mother says. The boy, wearing a shirt that reads “Mom’s #1 Dude,” looks up at the sky, lifts his arms above his head, and points at the bomber with both fingers.

“Do you want to get on my shoulders?” a man asks his daughter. She climbs up in her matching pink shorts and shirt and gazes at the battlefield.

“We warned you folks it was going to be noisy,” says the communications truck. “It’s going to also be smokier and dustier as the battle continues.”

Sand kicks up and canon smoke drifts over the bluffs. The sound of artillery fire nears. Weapons seem to fire more frequently. A hazy cloud of smoke drifts across the beach and settles on the bluffs. Soon, the reenactors, the veterans, and the spectators are enveloped in the same white cloud.

Sarah Kess is a writer and the online editor for The Ochberg Society for Trauma Journalism.