By Joey Horan
Photography by Lloyd DeGrane, Alliance for the Great Lakes

The U.S. Environmental Protection Agency has admitted it was wrong in accepting the Ohio EPA’s 2016 impaired waters list. The problem? Ohio didn’t provide an adequate assessment of the open waters of western Lake Erie, which was not included on the list despite the annual appearance of harmful algal blooms that threaten the drinking water of hundreds of thousands of Northwest Ohioans.

The development could lead to the federal agency declaring Ohio’s portion of the lake impaired, a designation that would trigger a formal cleanup through strict pollution controls. But for now, the U.S. EPA has merely given the state agency what amounts to a “do-over.”

In its letter to the Ohio EPA, dated January 12, the federal agency requests “that the State assemble and evaluate all existing and readily available data and information regarding nutrients in the open waters of Lake Erie, consistent with applicable statutory and regulatory requirements, by April 9, 2018, and submit to EPA the results of that evaluation for EPA’ s consideration.”

The nutrient at the center of this debate is phosphorus, and all sides agree that its excess presence in western Lake Erie is the result of agricultural runoff and the primary cause of harmful algal blooms. A massive bloom in late September caused near panic in Toledo, reminiscent of the 2014 bloom that triggered a 72-hour “Do Not Drink” water advisory for more than 400,000 Toledoans.

“The U.S. EPA appears to be merely delaying any remedy for Lake Erie.”

Madeline Fleisher, lead counsel in a lawsuit brought against the U.S. EPA by the Environmental Law and Policy Center and Advocates for a Clean Lake Erie, has been arguing for months that the federal agency shirked its lawful duty by accepting the Ohio EPA’s incomplete assessment in the first place. “The regulation is binary,” she argues in court documents, “Thus, if U.S. EPA cannot approve the state’s list, it must disapprove it.”

Fleisher now contends that the federal agency should be on the hook for western Lake Erie, a process detailed and mandated by the federal Clean Water Act (CWA).

The U.S. EPA declined to comment, citing “pending litigation.” The Ohio EPA, for its part, blamed the federal agency. In an email to Belt Magazine, an Ohio EPA spokesperson wrote that despite multiple requests for “a standard by which to base an impairment status,” the federal agency failed to provide one.

As for the withdrawal letter, Fleisher calls it a “get-out-of-jail-free card” for the Ohio EPA.

“The U.S. EPA appears to be merely delaying any remedy for Lake Erie,” says Fleisher, adding that the withdrawal letter still leaves the federal agency in violation of the law.

In an electronic filing to the court, Fleisher writes:

The relevant CWA regulation, 40 C.F.R. § 130.7(d)(2), requires U.S. EPA itself to act in the case of disapproval of a Section 303(d) list, not to send the matter back to the state that failed to develop an adequate list in the first place.

That action, Fleisher argues, should occur on a strict timetable outlined by the CWA. By law, the U.S. EPA must declare the body of water impaired within 30 days of disapproval. In that timeframe, it must also develop Total Maximum Daily Loads (TMDLs), or a “pollution diet,” as Fleisher calls it, that the state agency would implement. In theory, TMDLs would restrict the flow of nutrients (i.e. pollutants) so that western Lake Erie could be restored to adequate standards.

These limits would effectively serve as a regulatory measure on Big Ag and factory farms, the leading causes of excess phosphorus in western Lake Erie. 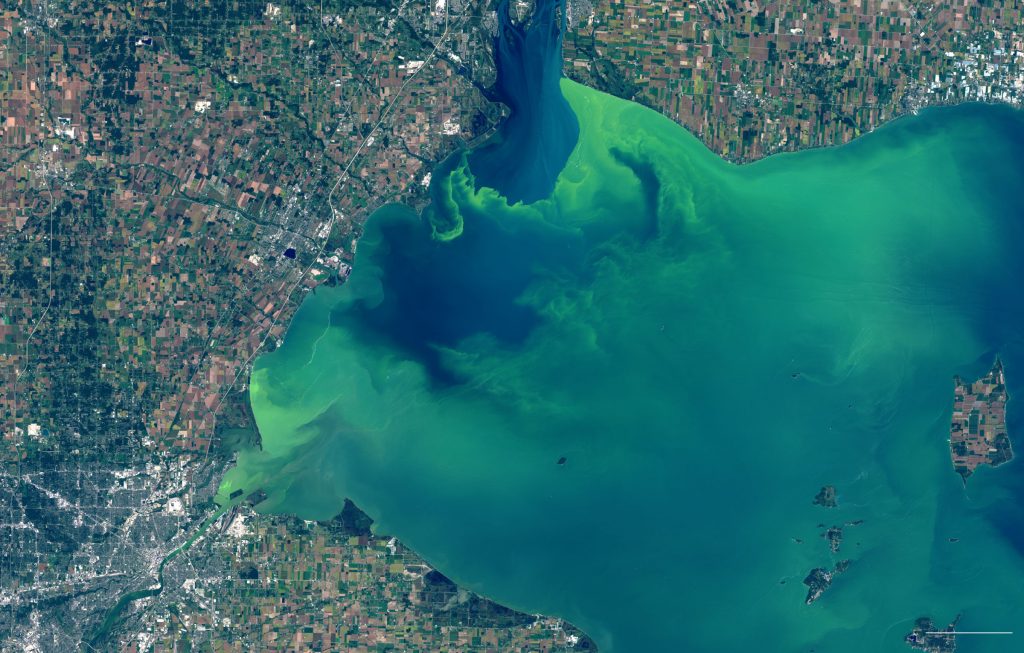 However, as previously reported in Belt Magazine, such regulatory efforts would require going up against powerful agricultural interests. The Western Lake Erie Watershed is dominated by corn and soy farms and the vast majority of them use Monsanto-trademarked Roundup Ready crops. According to an Ohio Northern University study, the application of Roundup to these massive swaths of land releases phosphorus from the soil, adding to the load on Lake Erie.

Additionally, millions of animals producing millions of tons of phosphorus-rich waste are warehoused in confined animal feeding operations (CAFOs) throughout the watershed. Instead of regulating these polluting forces, the Ohio EPA recruits their lobbyists. Karl Gebhardt, for example, is the Deputy Director for Water Resources at the Ohio EPA. He previously worked as a registered lobbyist for both the Ohio Farm Bureau and one of the first dairy CAFOs that came into Northwest Ohio.

Nevertheless, Advocates for a Clean Lake Erie spokesperson Marj Mulcahy says the U.S. EPA’s withdrawal letter “makes us more hopeful that the law of the land will be abided by.”

In the meantime, the group will continue to educate the public on the causes of harmful algal blooms and advocate for meaningful agricultural regulations, specifically on CAFOs.

As for Fleisher, she’ll continue to fight for accountability by law. “This is why we have courts,” she says.

Joey Horan is a writer based in Toledo, Ohio. He can be reached at jjhoran29@gmail.com.