Some Surprising Numbers From Cleveland

There were fewer people living in Cleveland’s Ohio City neighborhood in 2013 than there were in 2000. That is one of many surprising facts in The Cleveland Foundation’s The Pulse: A Look at Greater Cleveland by the Numbers. Published by Crain’s Custom Media, the report contains information such as the above, as well as stories about various aspects of life in Cleveland, which were “commissioned by sponsors and/or clients, who control the content.”

The report contains many deplorable trends that have been well-documented elsewhere: the county receives an F for number of high ozone days; 13.67% of children under 72 months in the city of Cleveland have elevated lead levels, and heroin deaths are rising. It also contains some upward trajectories: the percentage of high school graduates from the Cleveland Municipal School District is slowly rising and the crime rate is down.

The data confirms what those who live in Cleveland and travel by air know well: since United pulled its hub from Cleveland Hopkins, flights have declined precipitously, from 79,708 in 2013 to only 48,925 in 2015.

For those who follow the press about how Cleveland is attracting educated white millennials to the city, particularly to downtown and near west side neighborhoods, the numbers are also surprising: 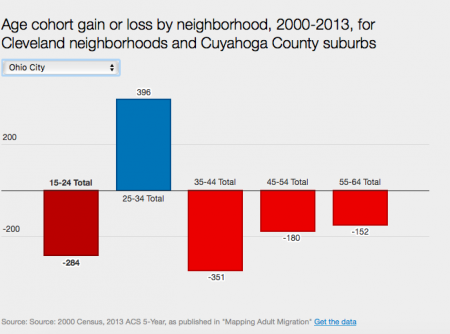 The take-away from this quick look at the report? Data, as we all know, can be interpreted variously, and looking at raw numbers, as opposed to percentage changes in millennial-aged college graduates, can be eye opening.

graphic from The Pulse.

Related stories on Cleveland demographics can be found here, here and here.