Afew years back, on a cold February night, my friend Dan and I were sitting in my living room in Chicago when Dan looked up and asked, “Have you ever read anything by Herman Hesse? He wrote something called Siddhartha?” I thought he was reading my t-shirt, a facsimile book cover decorated in blue and pink Birds of Paradise, which read: “Siddhartha by Herman Hesse.” He wasn’t. He had just read online that Billy Corgan, frontman for The Smashing Pumpkins, was planning to perform an “eight-hour ambient jam” based on that book.

Hermann Hesse was a semi-influential German author writing in the early part of the last century, and Siddhartha is one of my favorite novels. I could say with confidence that I had never knowingly listened to a Smashing Pumpkins song, and Dan was equally sure he had never read Hesse’s book. Nevertheless, the sign of the t-shirt and the fact that this event was occurring just forty-five minutes away were enough to convince us to attend.

A few weeks later, on a frozen afternoon, we found ourselves outside Madame Zuzu’s Teahouse, just north of Chicago—Dan a fan of Nineties rock, and myself a fan of literary fiction. We lined up behind a couple dozen Corgan devotees waiting for their chance to purchase seven-dollar tea and see an idol up close. The smells of the Indian restaurant two doors down were wafting up the street, and the barber in between stepped out to offer half-price cuts to those in line. No takers.

Thirty minutes later, we were up to the door. A six-foot-five retired roadie with shaggy red hair and a London accent assured us we were in for something special. I didn’t catch a name, but the security badge hanging from his cargo shorts bore the identification: Sir Lawrence.

The confusion of the chapter was captured perfectly by the chaotic sounds of the machine.

Upon entry, our ears were slapped with a disorienting wall of noise. Someone was mashing Pac-Man, Space Commander, and a recorded reading of Hesse’s 1920s novel into a single anthem. When my eyes caught up to my ears, I saw a middle-aged bald man in a too-tight sweater circling what looked like a hulking wall of servers. He clutched a box of multi-colored wires and had another bundle slung around his neck. As he wound through the space he ripped out a wire here, jammed another in there, flipped a switch, pulled a lever―and the music morphed. Billy Corgan was playing UNIVAC.

The teahouse itself was outfitted in rich browns and deep reds, and musician and machine stood at the front of the house, obscuring the main window and casting the room into an even deeper darkness. A bar stocked with clear glass jars of leaves and berries ran the length of the right side. Tightly-packed rows of chairs faced the performance, and tables had been pushed to the back. An amateur fortune-teller sat at one, flipping tarot cards.We ordered tea at the bar. Having smelled the signature tea of the event, which the barista proudly compared to popcorn, I opted instead for something with mint, and we settled into a pair of seats that had just opened up in the second row. I settled in and pulled out my copy of Siddhartha.

Hesse’s novel was published in 1922. Set in the Indian subcontinent, it follows the life of a man seeking wisdom during the lifetime of Gautama, the Buddha. Siddhartha, raised as a Brahmin priest, rejects his training and the privilege of his status in favor of finding his own path to enlightenment. He meets the Buddha himself early in the book, but rejects his teachings and heads out on a journey of self-discovery. We arrived in time to hear what happened after that meeting: Siddhartha journeyed to a nearby city and found work as a merchant. He turned away from his training of self-denial out of a desire to truly experience the pleasures of the world. 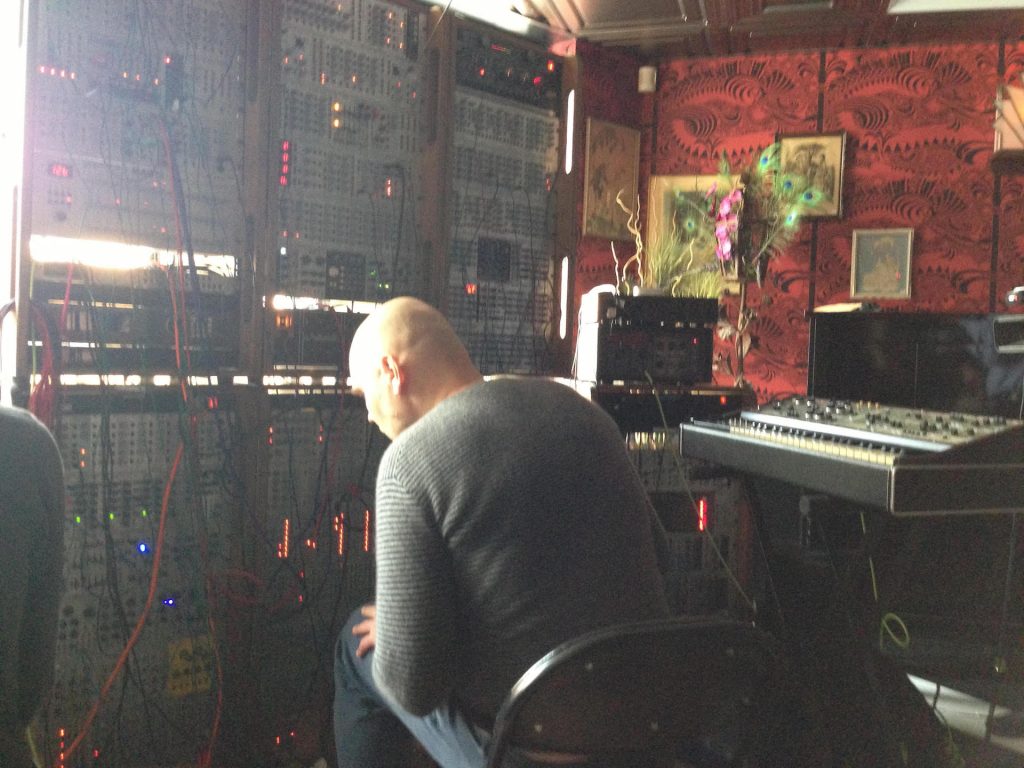 The chapter ended, and the musicians took a break while an elaborate cooling system kept the instrument from overheating. We talked with fans around us. People had driven from Indiana and Detroit to be there. There were rumors of tourists come in from Europe just for this show. A man to my right, Louis, pointed out Jeff Schroeder, the Pumpkins new guitarist, hanging out in the back, and offered his analysis of Schroeder’s skills compared to the legendary James Iha. I naively said that they were probably both talented guys. Louis stared back blankly. Dan had to bail me out.

The recorded reading began again, the tarot cards behind me were re-dealt, and Billy retook the stage. The show was already up to the seventh chapter, “Sansara,” in which Siddhartha finds himself trapped in an abusive cycle of worldly pleasures. The confusion of the chapter was captured perfectly by the chaotic sounds of the machine. The cacophony built to a roar as Siddhartha left the city and his wealth behind, then transitioned to psychedelic electronica as he wandered through the forest and down to the river.

There, at the river, the hero contemplated suicide as Corgan’s machine roared. “Might the fishes devour him, this dog of a Siddhartha, this madman, this corrupted and rotting body, this sluggish and misused soul!” the recording boomed. Then, from a remote part of Siddhartha’s soul, the prayers of his youth erupted, and sirens entered the musical fray as he voiced aloud the holy Om. The music faded away completely, and only the text was audible as Siddhartha fell into a deep sleep on the bank, having just experienced salvation. I had chills.

At this point, Louis noticed I was following along in the book I’d brought.

“Is that the words they’re reading?”

“Whoa! How’d you get a copy?” Then, turning to his neighbor: “This guy’s got a copy of the words they’re singing!”

After two hours, we were asked to leave to make room for the next bunch of spectators. As we passed the barber and headed for some Indian food, I noticed that some of the people exiting with us were rejoining the queue. Another stint in a Chicago February couldn’t turn back their desire for more of what was happening inside Madame Zuzu’s.

As I watched Billy scurry around his synthesizer with a handful of cables, I felt like I was watching a brother.

Later, I wondered what Corgan thought of the event when it was all over. Clearly Hesse’s writing means something to him. You don’t just improvise an eight-hour jam session around any old text you come across. But the fans weren’t there to hear Hesse, they were there to see Billy: to be in his presence, to hear his music, to wait outside the bathroom while he took a piss.

In the final chapters of the book, years after that moment of salvation by the riverside, Siddhartha is an old man making a simple living on the bank of that same river. His life has been full and diverse, and he has grown into the wisdom he always sought. He now embodies that which he could never learn. In his own words: “Knowledge can be communicated, but not wisdom. One can find it, live it, be fortified by it, do wonders through it, but one cannot communicate and teach it.”

Five years before Madame Zuzu’s, in an abandoned library in Huntington, Indiana, I pulled a battered blue paperback off the shelf. It changed my life. Over the years I have found strength and wisdom in the fictional story of an Indian mystic. I have been fortified by these words written decades before I was born. As I watched Billy scurry around his synthesizer with a handful of cables, I felt like I was watching a brother. He too had found, had lived, had been fortified by that same story. And in that teahouse on a Friday afternoon, he even performed wonders. Hundreds of unsuspecting fans experienced a story of life and discovery in a new and beautiful way. I hope they were listening. ■

Evan Cline lives in Oak Park, Illinois and is manager of exhibits and content at the Garfield Park Conservatory Alliance on the west side of Chicago.