The History of American Music, as Recorded in Richmond, Indiana

How one Midwestern record company changed the course of popular music


On April 6, 1923, King Oliver and his eight piece Creole Jazz Band were assembled in a small room in Richmond, Indiana. The room was thirty feet square with cement floors and padding on the walls to soften the sound produced by the well-traveled band, which had to time their takes between the passing of nearby trains. Standing in the corner farthest away from the giant recording horn and playing second cornet was a young man named Louis Armstrong. It was the legend’s first recording session.

So goes the story of Gennett Records, captured primarily through anecdotes and long lost 78-rpm shellac records. The Richmond-based label captured performances by many of the preeminent American recording artists of nearly a century ago. In total, Gennett produced foundational recordings across the musical landscape, including some of the most important blues, jazz, and country music ever recorded—Alberta Hunter, Jelly Roll Morton, Duke Ellington, Big Bill Broonzy. A young, yodeling Gene Autry recorded his first songs at Gennett, long before his career as “The Singing Cowboy” had begun. And blues originator Charley Patton tracked his legendary Paramount sides in the Gennett studio.

Gennett didn’t last long—1921 to ‘34, figuring generously—but what happened in between would help change the course of popular music for generations. That’s according to Kyle Barnett, author of Record Cultures: The Transformation of the U.S. Recording Industry and an associate professor of media studies at Bellarmine University. His book makes an argument for the primacy of the Midwest, and of Richmond, Indiana, in the long and complicated history of American music—especially Jazz.

The story of Gennett Records begins with the founding of the Starr Piano Company. The Starr Piano factory began operating in Richmond 1872, and started manufacturing phonographs for other major labels—Victor, Columbia, and Edison—in 1916. After a years-long legal battle that challenged a patent to the lateral recording and pressing process, the Starr Piano Company became one of the first of many upstart labels trying to challenge the “Big Three’s” dominance. In 1921, Starr finally built its own recording studio on the grounds and began their own label: Gennett Records. 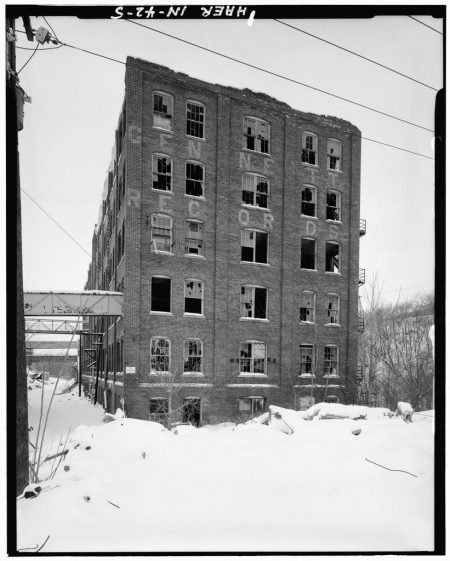 With sales of sound recordings surging at the close of the first World War, many other Midwestern record labels raced to record and issue their own records. A majority of these early labels were subsidiaries of the furniture makers that produced phonograph cabinets. The most famous example is Paramount Records, a subsidiary of the Wisconsin Chair Company, which recorded countless seminal blues artists like Ma Rainey, Tommy Johnson, and Blind Lemon Jefferson in their Grafton, Wisconsin studio. These companies had to improve the record players they were producing to entice listeners to purchase the machines for their own homes. “They realized that if you wanted to take the phonograph from a public amusement device like in penny arcades and into people’s homes, you needed to make them acceptable,” Kyle Barnett explained.

Even for the time period, Barnett says the Starr Piano recording complex was “from the dark ages.” He quoted a former Gennett employee who described the studio as being built into an “old dry kiln.” “There were trains that pulled up right next to the building. It was hot as hell. The equipment wasn’t the best. I mean it was in a river valley, so it was I’m sure humid a lot of the time,” he said.

At the time, the Starr Piano Company had storefronts and showrooms across the continent to sell their pianos and other products. When they began producing their own recordings, those storefronts became hybrid spaces that functioned both as record stores and as places to recruit new talent. While they had locations across the country, Barnett says that the Starr Piano storefront in Chicago’s South Loop is a particularly overlooked site of early music history.

“South Wabash Avenue was a really big deal in the twenties, and I don’t know if it’s been very commemorated in Chicago,” Barnett told me. “The Starr Piano store was there, as well as a number of nightclubs and recording studios, including the gospel label Rainbow Records. Marsh Laboratories was there too, which we only learned recently was the first studio to record electronically, even before the big shots were doing it.”

Barnett points out that at the turn of the twentieth century, mass migration into these cities was bringing various cultures and musical traditions together for the first time. “The entire Midwest was getting a huge influx of people from the south and from the east during this period,” Barnett said. “Southern whites and southern blacks were pouring into northern cities around the Great Lakes and the Midwest, and you’ve got people from the east and other immigrants moving there as well.”

Although much smaller in size, Richmond was connected to Chicago, Indianapolis, Louisville, St. Louis, and Cincinnati by rail, which allowed for the Starr Piano Company to move its products quickly. When it opened its own studio, it also allowed for musicians to be brought in from all over the region. Barnett describes musicians arriving on morning trains, recording throughout the day, and returning to perform in the cities at night.

Barnett, an Indianapolis native, told me he had no idea about the storied musical pedigree of his hometown, or the rest of the region. “I think that to be a Midwesterner is to too often think that you’re nowhere when you are always somewhere. A lot of the recordings happened in towns that you’ve never heard of, and you’ve never associated with music ever before. I was thinking a lot about what places get associated with music and what places don’t,” Barnett said. “Why is it that we sort of think about the Midwest as somehow being without music until some point?”

Gennett’s success—and the successes of other small labels competing with the major labels headquartered in the Northeast—was due to their ability to recruit, record, and release music in real time, all from one facility. Because they were unable to compete with the fees that established artists were charging, they worked with artists who at the time were relatively unknown to the general public. Gennett then attempted to market and release their music regionally, in a sense selling that region’s culture back to itself as it was emerging. Barnett says that genres, in our modern sense, hadn’t been established yet, which allowed them to take chances on recording a diverse array of music. 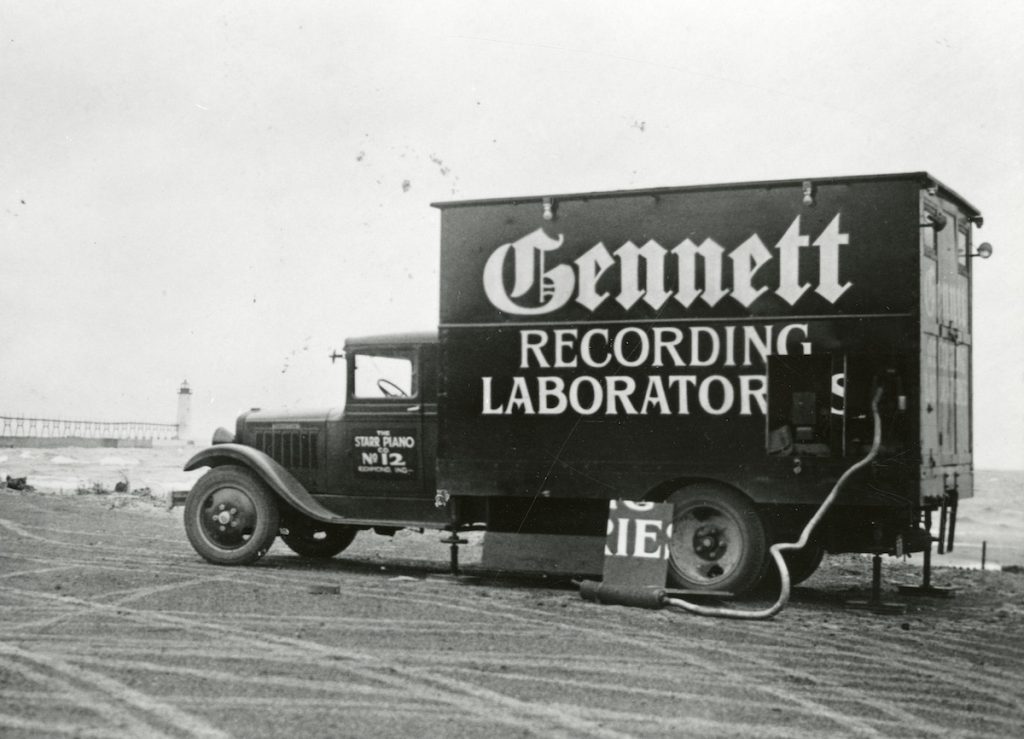 “Jazz becomes kind of a surprising niche, and nobody knows how long this is going to last,” Barnnett told me. Jazz as a term—who knows how long that’s gonna last, maybe a few years. How long will these records sell? Nobody knows… It’s all very provisional, and they’re making up these genres, almost like they’re making up catalogs to sell them. They’re listening to what consumers are saying and what audiences are saying, and then they’re trying to sell it back to them.”

Due to the amount of records they were producing, they also gave performers wide creative control in the studio, a rarity of the time, and a precursor to the prevailing ethos of the indie music label that have emerged ever since. Outside of recording performing artists, Gennett, like many small labels, was also recording what were called personal records, which included spoken word recordings, religious sermons, Christmas messages from celebrities. Even early attempts at fitness records were recorded at Gennett’s studio. “It’s important to remember that pretty much anything we do with media now, people were attempting to do with phonograph records then,” Barnett said.

These personal recording services also led to Gennett’s studio hosting Ku Klux Klan recordings. The Klan had a massive presence in Indiana for decades, spearheaded by D. C. Stephenson. Gennett was also the site of one of the first integrated recording sessions in the country, when Jelly Roll Morton led an all-white band, the New Orleans Rhythm Kings. It’s this sort of dichotomy that Barnett says makes examining this early media history so important.

“It’s America, you know—it’s us at our best and our worst. Sometimes church quartets would come in and do a church quartet record, and then they would come back and do one as a Klan outfit,” Barnett said. “They were mostly doing marches and sermons and hymns. “The Old Rugged Cross” becomes “The Bright Fiery Cross” and that sort of thing. They were also pulling in the music of Europe and African-American traditions, so they’re borrowing from the people they hate.”

By examining the history of other early record labels, and Gennett Records in particular, Barnett found that the Midwest has always been central to the cultural and political discussions that we are still having today. “A great thing about doing media history is that you start to see these patterns repeated, and it can be quite useful…” he said. “It’s weird, a century on, that we live in this period where there are all these societal changes, economic volatility, waves of immigration, an expansion of freedoms, and a group of people that feel really threatened by it. We saw the very same thing a century ago.”

The stock market crash and ensuing depression gutted the recording industry, and, coupled with the advent of home radios and the first commercial motion pictures, spelled the end for many labels. Gennett continued to sell pianos and produce sound effects records for silent films. (Barnett says that he is now the proud owner of a Gennett sound effects recording of the bowling alley that was once in Richmond’s Leland Hotel.) 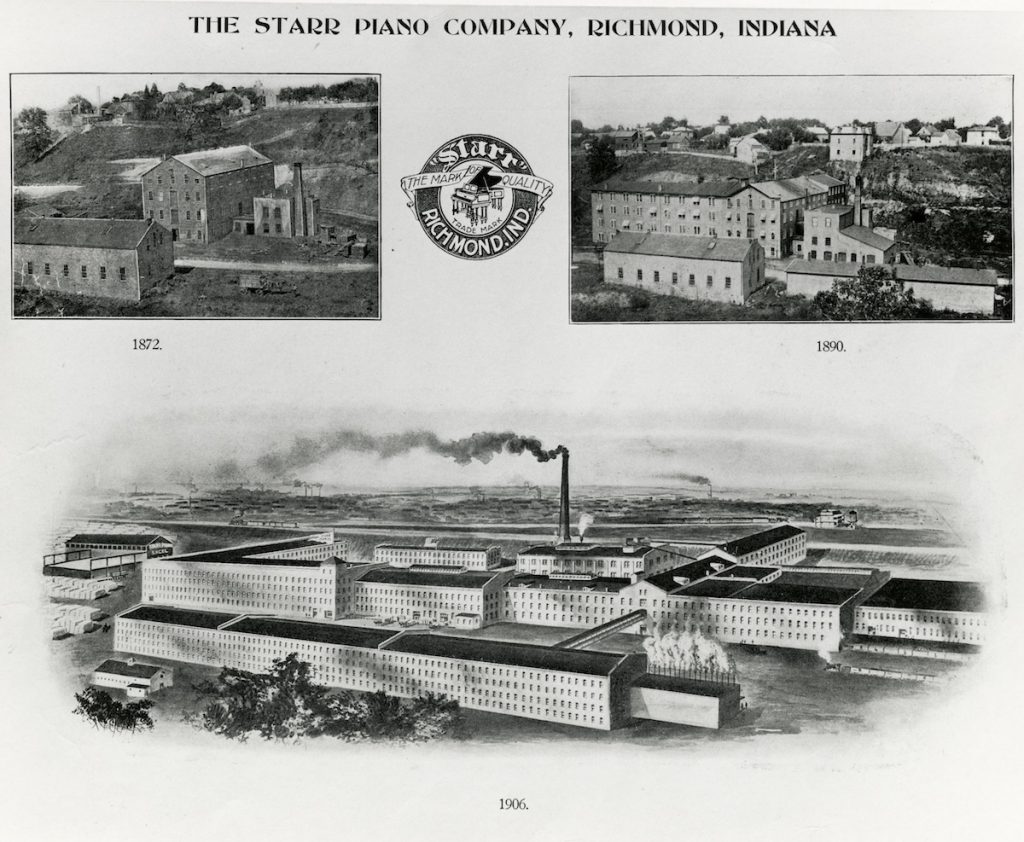 Composite image of the Starr Piano Company factory in 1872, 1890 and 1906, courtesy of the Indiana Historical Society.

By 1934, Gennett had closed its recording operations. Decca and Mercury Records used the record reproducing facility for some time after, but they, too, left the facilities behind. After piano sales slowed, Starr converted their piano manufacturing facilities into the production of refrigeration equipment, but, by 1952, the Starr Piano Company was closed for good.

All but one of the original Starr Piano buildings had been razed by the ‘90s, but in the three decades since, the history of the Starr Piano Company and Gennett Records has been given its rightful consideration among academics and record collectors. Richmond now holds yearly concerts at the site, which hosts the Starr-Gennett Pavilion and the Gennett Walk of Fame. Musicologists and jazz historians now consider Richmond and the studio at Gennett to be the “Cradle of Recorded Jazz,” and a documentary, The Music Makers of Gennett Records, was released in 2018. Currently, the Indiana Historical Society is operating an interactive exhibition that allows people to tour a recreation of the original Gennett Studio.

“It’s all pretty unlikely,” Barnett said. “But it’s crazy when you start to think about all the artists that came through that tiny little recording building on the edge of the Starr Piano Works.” ■

Kyle Barnett’s book, Record Cultures: The Transformation of the U.S. Recording Industry, was released in paperback earlier this year. More information about the book can be found here.

Avery Gregurich is a writer living and working in Marengo, Iowa. He was raised next to the Mississippi River and has never strayed too far from it.