On a cold wet night, practically still winter, wood frogs are improbably crawling out onto the dark road.

These frogs are about two-inches long with tan bodies and dark robber’s masks. They are common across Northeast Ohio, and their range extends from the Appalachians to Alaska.

Thousands of these flimsy, squirming creatures drag themselves out of the barely unfrozen ground to find a mate.

Wood frogs overwinter on the forest floor, frozen solid under the leaves, not breathing or eating. No heartbeat. No brain activity.

The wood frogs are the most northerly ranging (to the Arctic Circle) of all North American amphibians. They are the first species to rouse in the spring, and the last to retire in the fall. In Northeast Ohio, breeding can take place as early as mid-January in warm years, but has occurred in the first week of April after the long winters of the past two years.

Laboratory studies have shown that wood frogs can survive the freezing of up to 70% of their body water, and uninterrupted freezing periods of over four weeks.

The wood frogs produce a natural antifreeze before going into hibernation, increasing glucose levels 60 times higher than normal. Through a process too complex for me to explain, ice forms in the blood in a way that doesn’t damage cellular tissue.

“This allows the wood frogs to freeze, without internal cells freezing,” says Dr. Tim Matson, Curator of Vertebrate Zoology at the Cleveland Museum of Natural History. “When animals freeze, the thing that kills them is ice crystals puncturing the cell membranes. Fluids leak out and the animal dies.”

The cold can kill them if the freeze comes on too quickly, or if it goes too long.

“In a really cold winter without snow cover, a heavy penetrating frost goes deep and wood frogs can be exposed for so long they can’t recover. But in a normal winter a high percentage of them survive,” Matson explained. “Some frogs and toads don’t have freeze tolerance, and have to burrow below the frost level. If they get caught in the freeze, they’re dead. Green frogs and bull frogs can’t stand freezing either. They will go into a ponds or lake and just lay on the bottom. But wood frogs have been found buried, rock hard just below the leaf litter. How can anything survive that?”

Miami University posted a six-minute time lapse video of a wood frog thawing from a solid freeze. The look on its face is terrible as the ice melts off its skin and the tissues twitch. The frog blinks its eyes three hours into the thaw. At four hours, it starts to breathe again. The limbs begin to spasm at six hours. After ten hours, the frog appears normal.

Each spring they rear up from the dead and drag their pale soft bellies to the pools to mate. The males will arrive in droves and start calling.

[blocktext align=”left”]There is no apparent mate selection, just dumb luck.[/blocktext]The call sounds like ducks farting, like a drunken conversation where a bunch of little bullies trying to yell over each other, overlapping in a quacking chorus.

They lay in wait for a female to enter. There is no apparent mate selection, just dumb luck.

The female slips into the water and the nearest male wraps his arms around her, locking thumbs together under her neck, and rides her down into the depths of the pool. He will not let go until she releases her eggs. 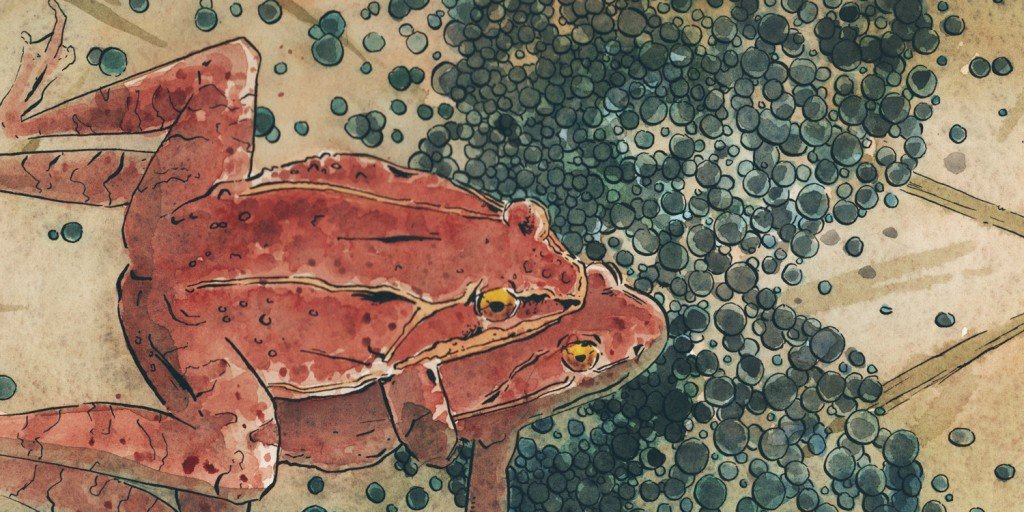 “Males capture and embrace any nearby moving object of appropriate size, releasing those lacking sufficient girth to be a gravid female,” writes Jon Costanzo, in Amphibians of Ohio. “Males that are clasped emit a loud croak, the so-called ‘release call,’ that signals his displeasure. I have occasionally observed a male wood frog firmly attached to other species of anurans, such as the green frog. Even salamanders may be embraced.”

A drowned female wood frog in a pool could have dozens of males clinging to her limbs.

“It is a phlegmatic and persisting clasping, nothing more.” writes Donald Culross Peattie, in An Almanac for Moderns. “It appears to be a reminder to the female that death brings up the rear of life’s procession.”

The joy of sex indeed.

Consider that the wood frog lays its eggs in vernal pools, places that will disappear, dry up by summer. The tadpoles will begin life eating algae and leaves for 2-4 months while the pool shrinks, until it starts to get crowded and the tadpoles turn on each other.

Biologist and pop-science author Bernd Heinrich conducted an experiment where he maintained wood frog tadpoles for up to eight months in a larval state, providing a steady supply of water and decaying leaf matter. But when the water level dropped, the little globs turned vicious, and the transformation into froglets happened in a short matter of days.

My younger cousin is a thoughtful kid, a writer. He often says, “I came out soft.”

Were my cousin a wood frog, he would have been eaten, quickly. Slightly larger and more aggressive than most of my own brood, I would have lived.

Seven months later, I’d sit alone under a leaf pile, preparing to freeze for the winter, thinking back to our time in the pool and the warming water, the light at the surface getting closer and closer, the world closing in. And that terrible inkling, an appetite pulling me toward my brother, my cousins, and using my mouth to tear them apart.

History is full of stories of murderous siblings. Is there a lesson?

Life wants life. The world is cold and wet and full of sharp edges. Trust no one.

Worldwide, amphibian populations are in severe decline due to habitat loss, invasive species, the spread of pathogens and climate change.

Biologists with the U.S. Geological Survey published a study in 2013 on amphibian population trends across the United States. On average, populations of all amphibians examined vanished from habitats at a rate of 3.7 percent each year. If the rate observed is representative and remains unchanged, these species would disappear from half of the habitats they currently occupy in about 20 years.

“Amphibians have been a constant presence in our planet’s ponds, streams, lakes and rivers for 350 million years or so, surviving countless changes that caused many other groups of animals to go extinct,” said USGS Director Suzette Kimball in a statement. “This is why the findings of this study are so noteworthy; they demonstrate that the pressures amphibians now face exceed the ability of many of these survivors to cope.”

“Wood frogs are really sensitive to a lot of environmental toxins,” Matson says. “Even iron which is so common in our groundwater, in the right combination of ions, can be toxic. Aluminum can be toxic. Some of these toxins like copper, which we don’t have in our soil or bedrock, is airborne — atmospheric fallout from chemical plants and incinerators. In the spring when amphibians are coming to the ponds, the water carries whatever toxins that have fallen in precipitation in the leaf litter. You can get spikes in the metals that accumulated in the winter’s snow and rain.”

But one of the most terrifying problems facing amphibians is the global spread of invasive pathogens.

Chytrid fungus is now a common frog killer, first documented in Ohio in 1977. Scientists suspect the disease originated in Africa and spread internationally with the distribution of the popular aquarium pet, the African Clawed Frog. Chytrid affects a frog’s skin, causing thickening that interferes with hydration and other functions. Salamanders can carry the fungus, but it seems to mostly impact frogs.

“In locations where chytrid has been present for a long time, the animals that are left have developed immunity through natural selection,” Matson says. “But in naive populations – when chytrid gets there, there’s often high mortality.”

[blocktext align=”left”]”Wood frogs have a very wide distribution, and they seem to be doing OK overall. I’m not going to say they’re doing well.”[/blocktext]Ranavirus is a relatively new threat – a family of viruses that affect several kinds of animals. Amphibian infections had been recorded as early as the 1960s, but they were not connected with large-scale amphibian die offs until the late 1980s. Symptoms of the infection are more prevalent in tadpoles than in adults.

The little tadpoles start to rot and hemorrhage. They become anorexic and lethargic. They lose predator avoidance response. “Deaths can occur in as little as three days of infection in sensitive species like wood frogs,” write Matson and Gregory Lipps Jr. in Amphibians of Ohio.

“Wood frogs have a very wide distribution, and they seem to be doing OK overall. I’m not going to say they’re doing well,” Matson says. “But when ranavirus comes in, they get hit really hard and we find dead tadpoles all over. We’ll lose them from some ponds.”

The terrifying thing about these new diseases is that they transcend landscapes, laws and protections. Much like the invasive pathogens decimating our bat populations, we can’t do much about chytrid and ranavirus, aside from watch in horror, and hope populations can adapt and recover.

“Had these disease organisms been around for a long time and been kept at bay? Or is this something newly evolved?” Matson asks. “It could go either way. Almost assuredly, there have been diseases like this in the past. Species evolve or go extinct. This is a flurry of disease activity we’re seeing here. Other than that, I don’t know.” 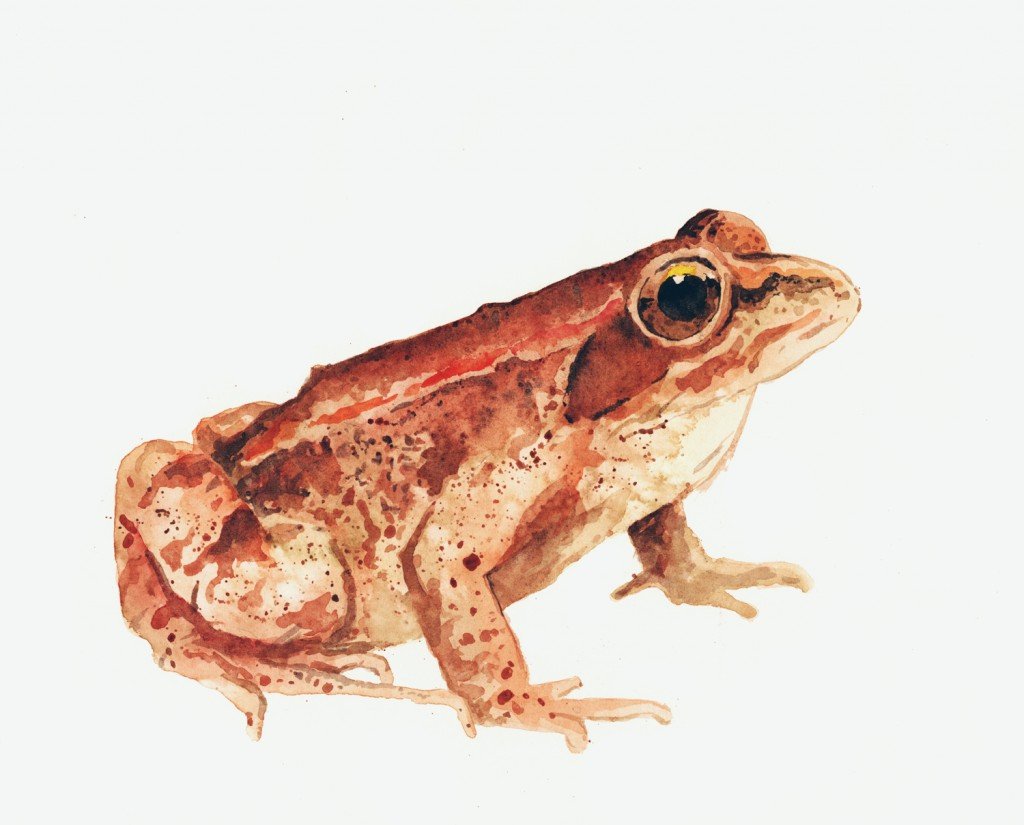 I’m drawn toward oddities, the freaks. I like to think of this brown little frog with its naughty black mask and questionable morals, as my springtime spirit animal.

In the dark, with the wind died down, I felt like I could hear every twitch, every sound in the woods.

[blocktext align=”right”]I’m drawn toward oddities, the freaks. I like to think of this brown little frog with its naughty black mask and questionable morals, as my springtime spirit animal.[/blocktext]The spring peepers trilled all around me, tiny tree frogs with X-shaped markings on their backs. Their calls felt so omnipresent, I could lose myself in the sound. They drowned out everything else. Eventually my brain filtered the sound until it faded into the background – just white noise. And I listened intently for wood frogs.

The river wended slowly toward Cleveland, gurgling to my left, swollen and muddy. Geese honked incessantly. Western Chorus Frogs called out, the sounds like fingers plinking over fine combs made of bone, like creaky doors opening.

I listened harder for that quacking frog, but heard none. As I approached a bend in the river, a chill came over me. My blood ran cold, and drained out of my scalp, down my back.

I knew I was getting closer to the pools where the wood frogs were mating. But something felt wrong.

I thought of Peattie’s writing about early spring, the terrifying irrepressible continuity reproduction.

“There in the pond float the inky masses of those frog’s eggs, visibly life in all its rawness, its elemental shape and purpose… Now is the moment when the secret of life could be discovered, yet no one finds it.”

I imagined walking into some amphibian version of Caligula. I told myself, there are things in this world that can’t be unseen. I chose to keep the veil up a bit longer.

New and Renewing Members of Belt receive Redhorse and/or nature prints for free.

Matt Stansberry was born in Akron, Ohio. He is a dad, nature writer, and fly fisherman. Find him on Twitter @LakeErieFlyFsh. More of David Wilson’s illustration work can be found at dwillustration.com.