If you’re a lifelong Indians fan, his birth year is significant. Chances are, you’re shaking your head in sympathy or smiling ruefully right about now. My long-suffering father has never seen his beloved team win the World Series. He missed the chance to experience a world championship by less than a year.

I take comfort in the fact that he’s at least seen the Indians in the World Series. In 1954 — when the team was swept by the New York Giants — he and his dad watched a game on a tiny black and white television with fuzzy reception. In 1997, we bundled up in winter clothes to sit in the bleachers at Jacobs Field to watch the team face the Florida Marlins.

For the record, the Indians lost both of those games.

To this day, any mention of the 1997 post-season elicits grumbles and sighs from my father. (Mention Jose Mesa, the relief pitcher who squandered the Indians’ 2-1 lead — and, as it turned out, the championship — and this grumbling intensifies.) But this ostensibly lighthearted grousing isn’t exactly innocuous. The look on his face when talking about this near-miss — his eyes softened by sadness and inescapable flashbulb memories of the team’s collapse — reveals the enduring impact of loss. It was the closest he had come in his lifetime to seeing the Indians win the World Series — and it was perhaps the best chance he’d ever have to see them win.

My stoic father would never admit this out loud, of course. But intuitively, I understand why he winces in pain. I was there with him in our family room that night in 1997, hopping around excitedly as we watched the game, daring to dream of an Indians championship after so many years of futility. I still empathize with the emotional aftermath of this loss, a sucker punch to optimism which deflated us both. We fell just short of victory together.

Indeed, my dad and I always bonded over Cleveland sports — especially baseball. My mother and younger brother were indifferent (if not apathetic) to the Indians, but I became hooked after going to my first game in 1986, a wide-eyed first grader awed by the game’s excitement. During the late ‘80s, when the upper deck of cavernous Cleveland Municipal Stadium was often nothing but empty sickly-yellow chairs, we went to games religiously. Watching the Indians lose was a shared ritual for us. My dad and I could always find common ground in a terrible baseball team, even if we butted heads on everything else. 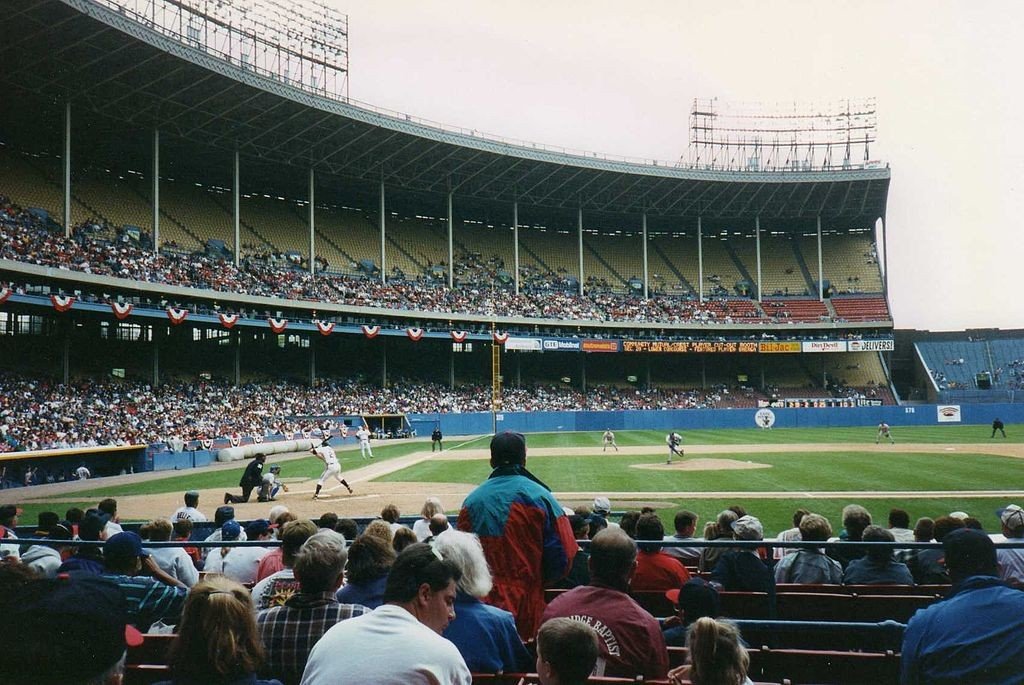 Our special relationship to baseball mirrored the one my dad had with his mom, herself a rabid baseball fan until the day she died. (In her later years, Paul Sorrento and Brook Jacoby were two of her favorites, and she had cable strictly so she could watch the games.) In August 1959, she took him to see the Indians face the White Sox. The team was neck-and-neck with its Chicago rivals for first place, and 70,000 people had flocked to the stadium.

As my father recalls, the Indians lost that game (and the rest of the pivotal series, too). But that year — thanks in no small part to her gesture — he became a “live or die” fan of the team. He started collecting baseball cards, which survived his childhood in pristine shape because he was an only child. Listening to the Indians on the radio became a staple; seeing televised games — a much rarer occurrence back then — was a special treat. Much later, he and one of his best friends (my godfather, in fact) stood in long lines at Ten Cent Beer Night, before the game ended in forfeit because of a drunken riot. He saw Frank Robinson debut as the first African-American manager in baseball, and went to Opening Day every year, like clockwork.

And after he and my mom got married, my dad connected with her relatives over his love of baseball. My great-grandparents would drag lawn chairs outside their apartment on the near West side, located at the intersection of 110th and Detroit. Radio between them, they would spend warm summer nights together, listening to the games. My great-grandfather used to talk Indians with my dad, because the latter “was the only one who cared.”

Indeed, my dad has always had faith in the potential of the team. Each new season brings a clean slate — and the possibility that this year things would click for the Indians, even if last season produced, say, 100-plus losses. But this success could be just around the corner. We even bought a 20-game season ticket package in 1993, because it meant we had first dibs on tickets for the shiny new ballpark — as if a different locale meant a change in fortune.

Still, my dad comes to his optimism with wariness and pragmatism. Being an Indians fan is less about dramatic losses and more about sustained, prolonged mediocrity — the dull ache of average baseball. He acknowledges this, but doesn’t let precedent ruin his love for the team. If anything, he relishes their underdog nature, the fact that the Indians are (generally) never expected to be competitive or successful. It’s a humble way to approach sports fandom that’s very much in line with his personality — and very much how he taught me to love the Indians.

Because my dad was used to ineffectual baseball, I too learned early to temper my expectations when it came to the Indians. Expect to be let down, and then be pleasantly surprised with success — although this was obviously temporary, so I should enjoy it while it lasts. Love the Indians unconditionally — but be aware of what you’re getting yourself into.

Recently, I asked my dad what keeps him a fan — why he still spends most summers on the couch in the air conditioning, watching the Indians on TV. Without missing a beat, he responded, “Because I’m a born Clevelander. I live and die by Cleveland sports.”

He chuckled as he said this, as if my query’s answer was obvious. “As a Clevelander, you should know that by now,” he added, to underscore the preposterous foundation of my question.

While other major league teams are perennial losers, being an Indians fan requires a very specific mindset, one unique to — and ingrained in — Clevelanders: Throw together hope, cynicism, frustration and nostalgia — and a ton of blind faith to balance it all out. Today’s Indians might break your heart, but tomorrow’s team just might make it soar. And even if they don’t? Well, to paraphrase a famous baseball quote, there’s always next year.

This story appears The Cleveland Anthology.

Annie Zaleski is the Marketing Director at Belt Magazine and a freelance writer whose work has appeared in Salon, AV Club, Los Angeles Times, Wondering Sound and dozens of other publications. She’s also worked as a writer at a nonprofit and as a music editor at an alt-weekly — but no matter what the job, she remains a life-long(-suffering) baseball fan.