In addition to leaving thousands stranded in dangerous refugee camps overseas, the current battle over immigration also has a withering effect on resettlement programs here in the United States.

“We laid off nine staff as a result of the first travel ban,” says Angie Plummer, the Director of Community Refugee and Immigration Services (CRIS) in Columbus, Ohio. “Our planned arrival numbers [of immigrants] for 2017 seem to be in a constant state of flux, having been revised downward, anticipating no arrivals for four or more months, and then having arrivals resume,” she says.

U.S. Together, a not-for-profit mutual assistance agency founded in 2003, was forced to lay off six full-time employees in Columbus and six full-time employees in Cleveland. The organization also lost two jobs in Toledo. Most of these layoffs were bilingual case workers responsible for assisting immigrants as they transition into American life. Perhaps the cruelest irony is that U.S. Together is an organization staffed entirely by former refugees. These were people who made a career helping others like themselves.

Likewise, the International Institute of Akron (IIA) has seen a one-third reduction in staff, also nine employees. This situation is not unusual for resettlement agencies across the country, although the situation has received limited print and airtime. Most of these lost workers have language skills and experience which would be difficult to replace; many are refugees who know how to navigate the system because they have been through it themselves. 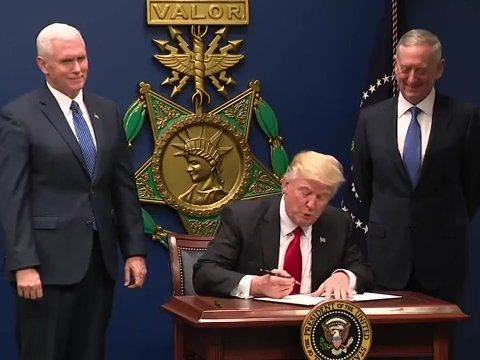 While Executive Order 13769 signed by President Trump on January 27 has been suspended through a series of Constitutional challenges, it has nevertheless left thousands in limbo.

Timelines for vetting immigrants are disrupted. Border patrol officers are given unprecedented power to detain even those with valid entry visas. Arrivals have stopped or are uncertain. All of which spells trouble for the agencies which seek asylum for refugees. The initial shock of the first travel ban put all immigration on hold, for some agencies for as long as 60 days. This delay meant that agencies were not paid by State Department or the U.S. Office of Resettlement, the government offices responsible for reimbursing the cost of refugee resettlement.

Every travel ban litigation delays the arrival of displaced peoples and changes the dynamics of a structure that is literally world-wide. The dissolution of resettlement agencies means more than simply lost jobs, it also affects an entire industry designed to help people. “It’s a delicate ecosystem when it’s working,” Liz Waters at IIA says of the international effort to help displaced peoples. Resettlement agencies, which are the roots of this system, can only adjust by downsizing for survival.

Since 1980, resettlement agencies — from small private entities with primarily regional placement to the massive Catholic Charities USA with its international outreach — have brought over three million refugees to the United States. Jimmy Carter signed the act into law that year because, according to its Statement of Signing, “The Refugee Act reflects our long tradition as a haven for people uprooted by persecution and political turmoil.” The Refugee Act streamlined and coordinated procedures for bringing people into the country and guaranteed them an equitable system for vetting. In part, the Act was designed to allow flexibility for the mass of agencies and international aid organizations in an ever changing world. It also established government’s role in helping refugees.

“A carefully crafted infrastructure with robust language capacity was dismantled,” says Plummer. This disturbance has a ripple effect all the way across both oceans, both east and west to the Balkans and the Middle East, and south to Central America and Africa.

The extent to which the current administration damages the worldwide process of humanitarian aid is nothing short of staggering. Trump’s executive orders actually stymies international aid organizations, as many as a dozen federal and state alphabet agencies, and a network of some 250 affiliates in 49 states and Washington D.C.

Turning a Tanker on a Dime

The long process of becoming an American refugee actually starts overseas, either through the United Nations Refugee Agency (UNHCR) or through an American embassy. The UNHCR collects documentation, biometrics (fingerprints and iris scans), and conducts interviews and assesses applicant needs.

[blocktext align=”right”]Resettlement agencies,
which are the roots of this system, can only adjust by downsizing for survival.[/blocktext]Additional independent biometric checks are conducted through the FBI, the DHS, and the U.S. Department of Defense. The Department of Human Services performs enhanced reviews of Syrian applicants and may refer cases back to the USCIS Fraud Detection and National Security Directorate for further review. Trained DHS interviewers screen applicants face-to-face and can detain them for additional checks if warranted.

Applicants are then subject to medical checks that may get them medical help or end their quest for resettlement altogether. The entire process takes about two years to complete. In the end, less than one percent of the global refugee population will find sanctuary in America.

Those lucky enough to navigate this maze of agencies and investigations will have to book travel through the International Organization for Migration where they are subject to even more screenings by the U.S. Customs and Border Protection’s National Targeting Center-Passenger and the Transportation Security Administration’s Secure Flight Program. Once they land on American soil, refugees are required to apply for a green card within a year.

The Office of Refugee Resettlement provides short-term financial and medical assistance to new arrivals, and the Reception and Placement Program works in conjunction with resettlement agencies like those profiled in this article to place people safely in American communities. Resettlement agencies help refugees with housing, language classes, cultural education and employment applications.

Obviously this vigorous apparatus for vetting refugees, developed over the last 36 years and adrenalized in the post 9/11 world, cannot simply retool to fit the current political situation and still perform its humanitarian mission.

“It’s like trying to turn a tanker on a dime,” says Waters. Refugees who do not meet benchmarks as they wend their way through this system of checks and counter-checks are simply denied entry. This includes refugees from all parts of the world.

“It has affected everybody,” says Nadia Kasvin, resettlement coordinator of U.S. Together in Columbus, Ohio. “The reduction in numbers of refugees has affected all [refugee] lives,” she says. While Trump’s travel bans are ostensibly aimed at six Muslim countries, the bans’ effect has trapped refugees from all over the world. Refugees from Burma, the Ukraine, and Bhutan, among other countries, are caught in the confusion of governments and agencies since the travel bans were first signed.

The good news is that refugee placement has resumed, even if it is unclear how many will be admitted.

[blocktext align=”right”]“It has affected everybody.
The reduction in numbers of refugees has affected
all [refugee] lives.”[/blocktext]The second travel ban, Executive Order 13780 (also suspended after judicial review), effectively restricts the numbers of American-bound refugees by half.

“The injunction from the Hawaii court [of Donald Trump’s executive order] means that the reduction to 50,000 of the total refugees the US will admit is on hold,” Plummer says.  “But overseas processing entities laid off significant staff and [the National Counterterrorism Center/Intelligence Community] stopped doing interviews” — one of the primary steps in attaining immigrant status — “so there is still a lot of uncertainty about how many [refugees will be admitted] and who will come.”

In short, while his travel bans are themselves banned, Trump was still able to limit the number of people granted entrance to the United States.

“The travel ban didn’t end up affecting us as much as the reduction in arrivals,” Charis Steffel, a Resettlement Case Specialist at World Relief Columbus wrote over Facebook. “While judges can reverse the travel ban and have,” she wrote, “it’s within the president’s responsibilities to determine how many refugees can enter the US each year. Trump reduced the number from 110,000 to 50,000 this year which basically cut our funding by more than half.”

“We are happy that refugees continue to arrive and we are happy to provide services,” says Kasvin. “But at the same time it is difficult to plan when we don’t know what is going to happen.”

Most refugees are part of a family, either as an entire family or as individual members attempting to rejoin their extended families. “People are wondering if they’ll ever see their families again,” says Walters.

Damage to the resettlement industry has hurt other unique initiatives geared toward local communities as well.

Students in the liberal arts could help with language training and translation. Students in the YSU College of Business could explain the basics of economics and tax preparation, or they could network with local businesses, finding jobs for refugees while forging their own business connections.

If nothing else, Hripko’s initiative is an attempt to integrate the university with the Youngstown community’s newest members. “As a University, we are in many ways, in the welcoming business,” Hripko said by email, “assisting students to find housing, bus transit, work/study jobs, internships, and eventually professional careers.”

This welcome would be extended to a small band of people bound for formally abandoned houses refurbished by the Youngstown Neighborhood Development Corporation. 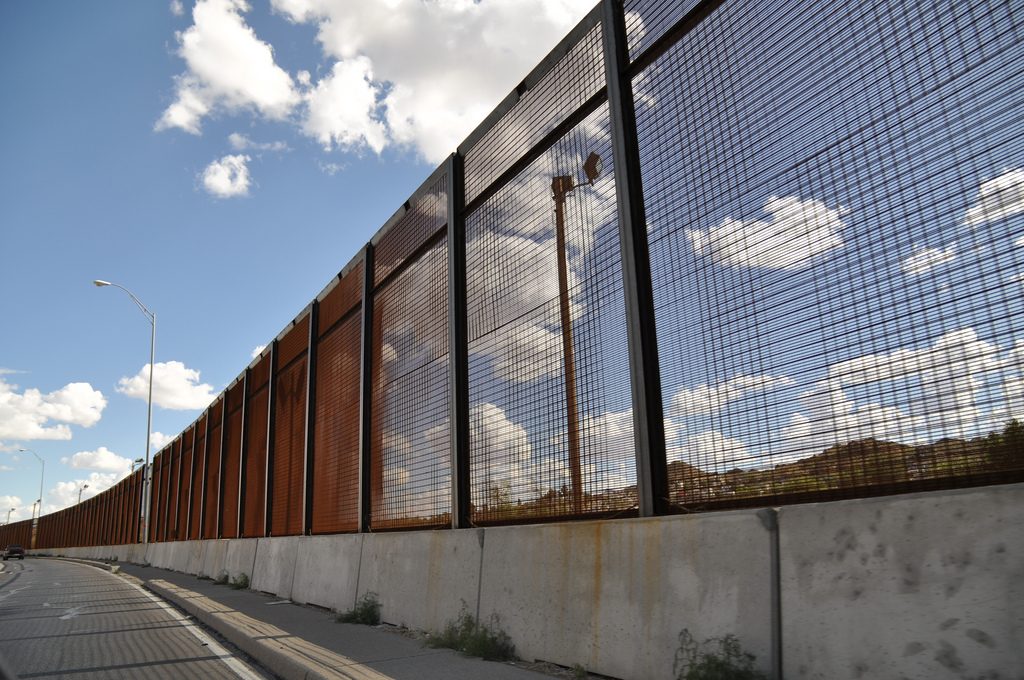 In the wake of Trump’s pledge to bring jobs to America, these layoffs and curtailments seem like a familiar irony.

At this time there are some sixty-five million displaced people in the world, more than at any other time in history. Of the millions of refugees who have made America their home since 1980, virtually none of committed crimes of any sort. Most are extremely grateful for the opportunity to live in this country, according to the people who work most closely with them.

“These people want the freedom to worship in their religion, and to speak, and to raise their children,” says Waters. “I think it’s really easy for us to put [the immigrant situation] out of our minds as Americans,” says Waters, “and our whole pride as immigrants who gave future generations our country. And it’s very easy to get divorced from that when fear takes over.”

Yet as the Trump administration turns its back to the world, the grassroots response from everyday Americans provides a ray of hope.

“One very positive effect has been the outpouring of community support,” Plummer says. Gifts of food, clothing, and time have poured into resettlement agencies. “Everything from people bringing flowers and cookies for staff to boost morale, to volunteers initiating fund raising campaigns for us,” says Plummer. “The amount of financial and other support has never been higher. People are channeling their objection to these orders by doing something on behalf of CRIS and the refugees we serve,” she says. All the agencies I spoke to have received this outpouring of support, both in spiritual and material offers.

This grassroots empathy seems to showcase the divisions now cutting through American culture.

“We are so proud of being a nation of immigrants,” says Waters, “but others want to build a wall.”