Photos and text by Adam Eisenstat

Nestled within some of Pittsburgh’s many wooded hillsides, or “greenways,” are dark corners that harbor vestiges of long demolished houses, city blocks, and even whole neighborhoods. These areas often sit in the middle of everything — abutting major streets, parallel to commercial strips — yet are thoroughly obscured by the greenways’ dense tree cover; and further estranged from the surrounding areas by the hillsides’ daunting steepness.

In a city of extraordinary physical charms — readily visible from countless panoramic views that showcase the mesh of tiered hills, converging rivers and the varied infrastructure such peculiar geography necessitates — these niches represent another perspective: a close-up, micro-view. They might also be considered gateways to another dimension of the landscape, or portals through which anyone — whether a lifetime resident of the same neighborhood or a first-time visitor — might venture and find him/herself immersed in a captivating environment where nature and the built world entwine dramatically. 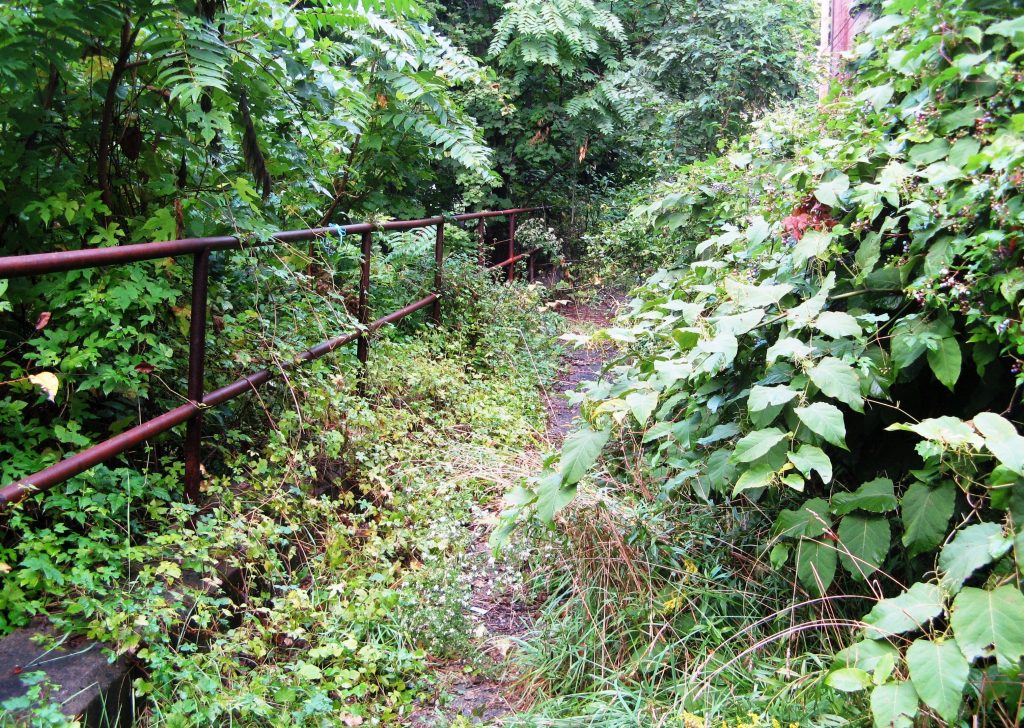 One-third of Pittsburgh is greenspace — parkland, community gardens, vacant lots, and “open spaces” (purposefully undeveloped land). Among the latter are the greenways, which account for 7,000 acres, or 20 percent of the city’s total area. In Pittsburgh, “greenway” is used both informally and as a designation that City Council gives to selected areas. (These “official” sites — labeled on Google maps, city guides, etc. — comprise about one-tenth of the greenways’ total acreage.)

In 1980, the Department of City Planning started the “Greenways for Pittsburgh” program to assess and manage these spaces. The program initially focused on more technical issues — consolidating the ownership of public and private lands and centralizing the administration of these disparate areas. In retrospect, though, the germ of a mature, forward-thinking policy was there from the beginning, as illustrated by subsequent proposals that elaborated on the program’s original ideas. These plans, often stressing the need for community involvement in sustaining the greenways, focused on preservation and stewardship, emphasizing how greenways curb air and noise pollution and reduce storm water runoff, among other environmental benefits. They also emphasized aesthetics and recreation — promoting the wider use and appreciation of these pervasive natural wonders; including, for example, a plan to connect greenways to adjoining neighborhoods/parks and expand their use by creating trails, viewing platforms, and rest areas. 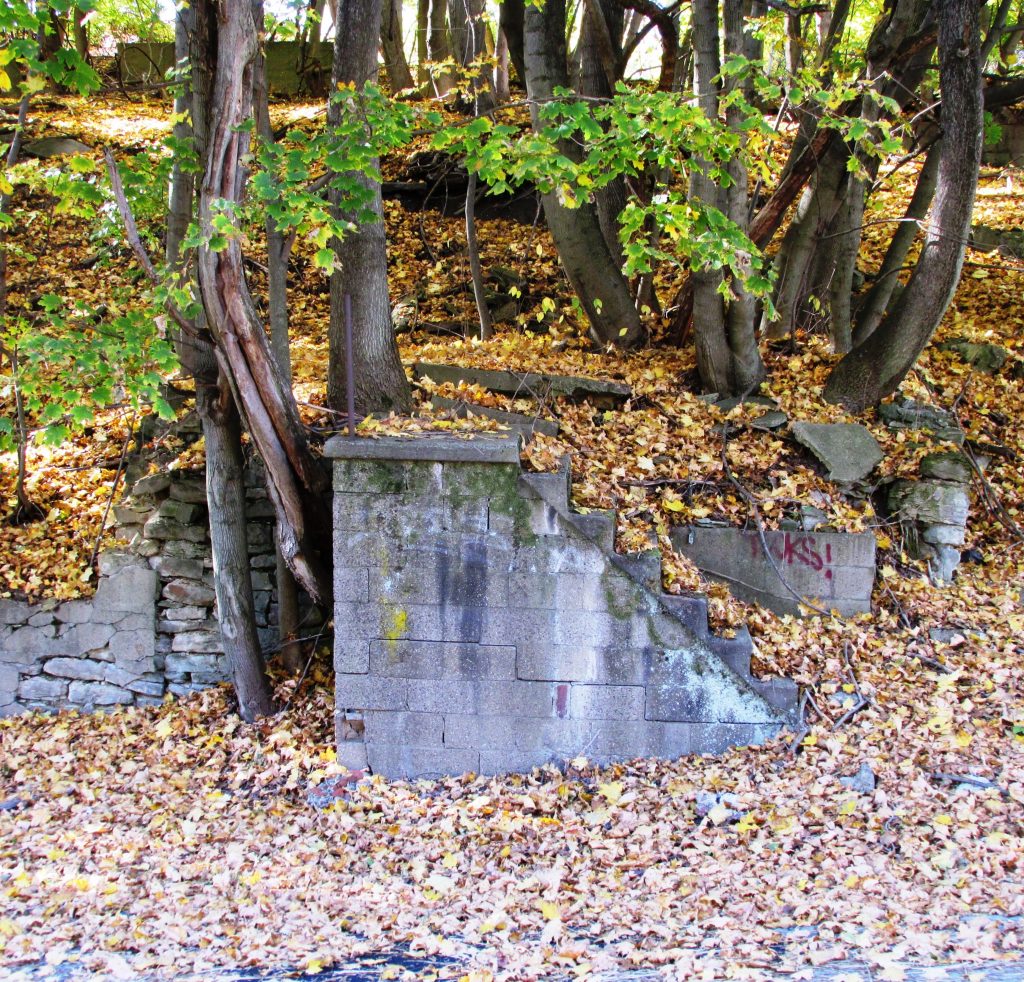 Nature on top: Trees sprout through vestiges of the built world

It’s ironic that “Greenways for Pittsburgh” was spawned in 1980, when the city’s economic decline and the collective trauma that followed were at or nearing their most extreme point. At the time, neither environmental protection nor the many vacant, seemingly useless green hills of Pittsburgh were priorities for most people (including those in government).

Deepening this irony is the fact that since then — given the utter transformation of Pittsburgh’s economy and the key roles environmentalism and urban aesthetics have played in it — the greenways have been chronically neglected: starved of funding and all but ignored. So they remain generally inaccessible and effectively off-limits (except maybe to squatters and poachers — drawn by the free roaming deer and wild turkeys — and the perps doing illegal dumping).

This is unfortunate, because the greenways — even in their current state — offer those with a sense of adventure (and a healthy pair of legs) an opportunity to experience Pittsburgh’s unique topography and discover how the city is formed; to see — literally from the inside — how the urban forest weaves together different neighborhoods and elements of the landscape. 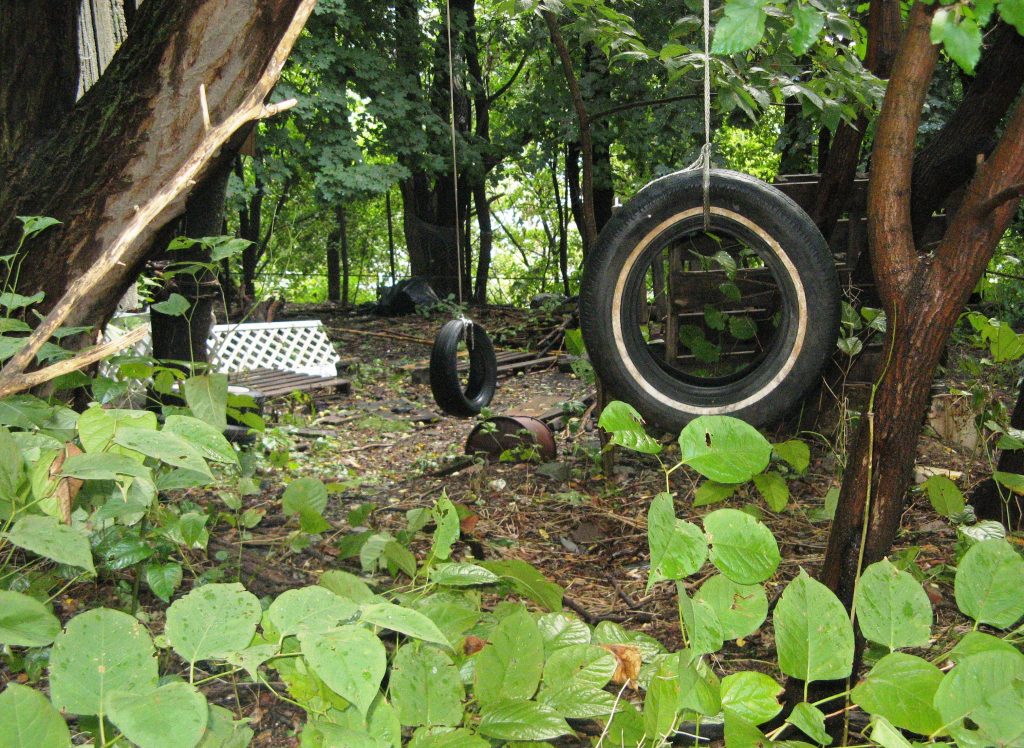 The greenways of Pittsburgh are obscure, but not unappreciated…Automotive waste and other detritus used for a makeshift playground/patio

The East End — the city’s most densely populated and diverse area — is thick with these patches of wilderness, like the Morningside Greenway (an official site); and the Negley Avenue greenway (unofficial), running between the adjoining neighborhoods of East Liberty and Garfield. This little section of a much larger greenway is a secret world, beyond the periphery, behind a curtain of trees. The sound of traffic below drifts up sporadically, muffled and remote; the light plays peek-a-boo through branches and leaves. Collapsed walls and cinderblocks, shafts of rebar protruding from bricks once part of staircases embedded in the hillside — remnants of the past, fragments severed from more solid times when this place was less green but part of the living city, with houses intact and inhabited. Now the houses are entombed where they once stood, their remains bearing traces of violence: destruction, defacement. Over time, though, in its natural course — as crumbling structures insinuate themselves upon its domain, which takes root in turn through coiling vines and snaking ivy and the other relentless outgrowths of its vascular network — the greenway provides a lush repose to the ruins of Pittsburgh.

The city’s greenways will probably never be touched in any significant way by officially sanctioned plans; nor become chic — like the High Line in New York — and enjoy the kind of prestige and popularity that flow to a colorful artifact that is embraced by denizens of the now (which means, above all, no hype — celebrity endorsements, fashion shoots, and the like). Maybe it’s for the best, though; continued obscurity might be the fate most suitable for the greenways, allowing them to retain their spooky, enigmatic aura and truly evoke some deep-rooted quality essential to Pittsburgh — which, after all, would not be Pittsburgh without its greenways.

___
Adam Eisenstat is professional writer (and an avid photographer). His work can found at I-Vortext.com.