A Utopia at Niagara Falls

In the late nineteenth century, a battle raged over the future of Niagara Falls. Nikola Tesla and Thomas Edison, two giants of the history of electricity, fought to secure a contract from the International Niagara Commission to harness the power of the Falls. Each man touted his own system for transmitting the hydroelectric energy. Tesla, along with George Westinghouse, promoted the alternating current (AC) system of the Westinghouse Electric Company, while Edison hawked direct current (DC) through his Edison Electric Light Company. Newspapers named the ongoing AC-DC feud the “war of the currents.” In the case of Niagara, Tesla won the contract, due in part to the influence of the British physicist Lord Kelvin, who had seen his design power the 1893 World’s Columbian Exposition in Chicago. In 1896, Tesla’s plant went live, and power surged to nearby Buffalo, New York.

While Edison and Tesla fought the war of the currents, another man was writing his own version of the future of the Falls. In 1894, King Camp Gillette, whose namesake company would later become famous for producing safety razors with disposable blades, wrote a book called The Human Drift, outlining his idea of a North American utopia. Some of Gillette’s proposals in The Human Drift were progressive. He called for gender equality in all matters, believed automation would allow workers to choose their vocation, and wanted everyone to have a fair share of the country’s wealth. But perhaps the most distinctive aspect of Gillette’s vision centered on a corporate dream at Niagara Falls.

In Gillette’s utopia, there would be a single, massive city, “Metropolis,” dominated by a single corporation: the United Company. Metropolis would be located around, and on top of, Niagara Falls, resting on a giant concrete foundation. Gillette dreamed that the entire population of the United States—at the time, around sixty million people—would live in this megacity and work for the corporation. As a businessman, Gillette was fond of the principle of “economies of scale,” which held that certain businesses save costs proportional to the size of their operations—the bigger the business, the bigger the savings. And as the geographer Patrick McGreevy has documented, Gillette believed this principle should also be applied in social planning. 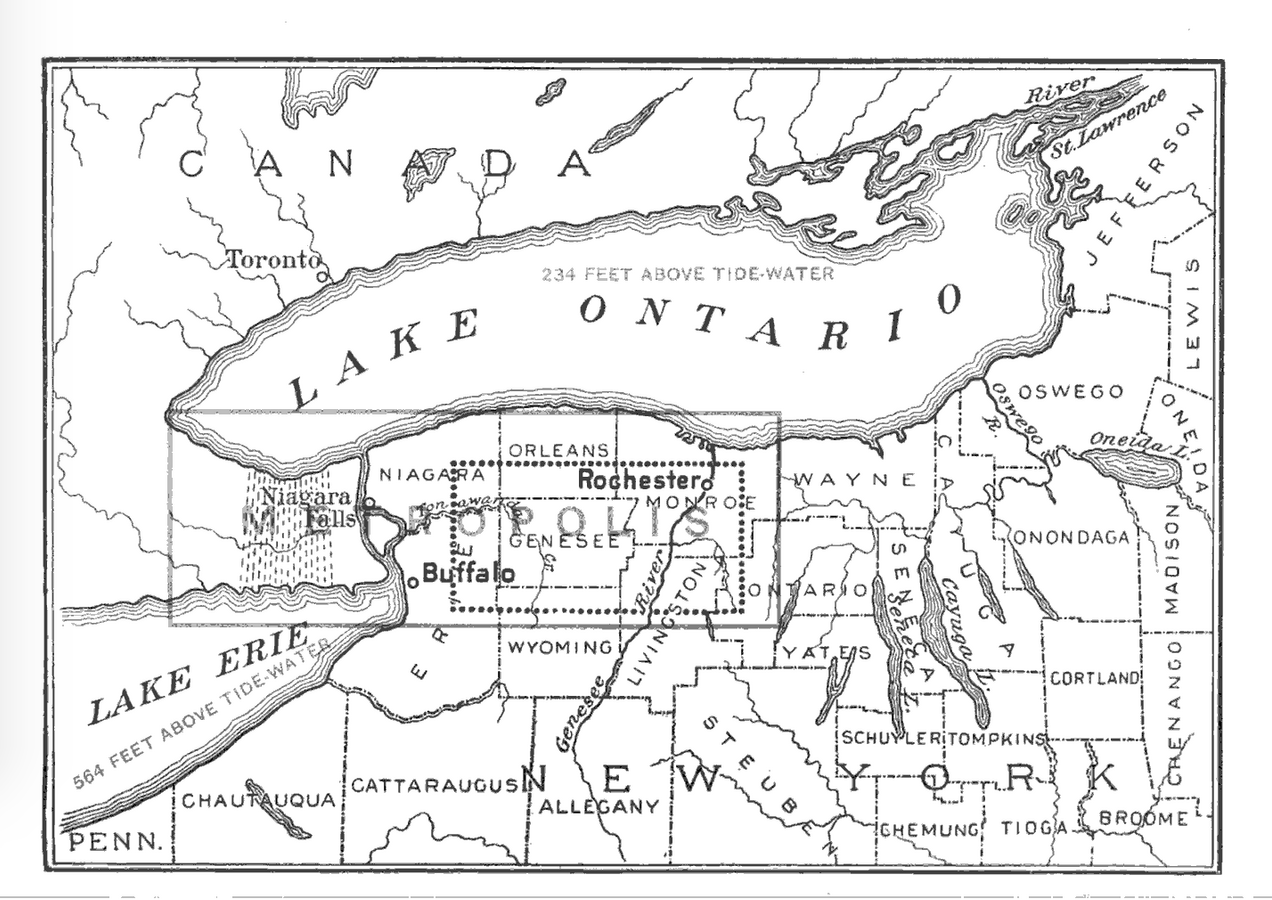 Map of the planned location of Metropolis. Public domain image digitized by Google.

The renewable power of Niagara Falls beat as the imagined heart of Gillette’s utopia. Gillette, likely influenced by news of the Niagara Commission’s hydroelectric project, believed that the Falls could supply limitless energy to solve human problems. The Falls, Gillette wrote, contained “a power far beyond our needs, and capable of keeping in continuous operation every industry of the Company, as well as power necessary for all purposes pertaining to the maintenance of a great central city, such as would be the natural result of centralization of the manufacturing industries.” The region encompassing Buffalo, Niagara Falls, and Rochester was therefore the ideal site for Gillette’s utopia. “I have come to the conclusion,” he wrote, “that there is no spot on the American continent, or possibly in the world, that combines so many natural advantages as that section of our country lying in the vicinity of the Niagara Falls.”

Gillette, in true utopian fashion, planned Metropolis in geometric symmetry. The city would be sixty miles long—from Buffalo in the west to Rochester in the east—and thirty miles wide. Its rectangular plan would contain layers of residential and commercial property: The first layer would house the infrastructure of “sewage, heating, cold air, and electric systems.” Twenty-five feet above the first floor, the second floor, surrounded in glass and supported by steel pillars, would contain the transportation system. A third platform, fifty feet above the second, would protect the city, shielding it from the forces of nature that would provide its electricity.

The three floors, made of glass and steel, would cover the entirety of the eighteen-hundred-square-mile city. Hexagonal streets would pattern the maps and cylindrical skyscrapers that housed the people. Except for glass surfaces, every square inch of the city—buildings, pavements, and sidewalks included—would be covered in glazed white tile. The porcelain city would be beautiful, durable, and easy to clean, Gillette reasoned. In essence, the razor magnate wanted to raze the landscape of the region, pave over much of Niagara Falls, and build a shining new society on this blank concrete slate.

Gillette spent the rest of his life trying to implement his utopian vision. After the Human Drift, Gillette published Gillette’s Social Redemption in 1907, Gillette’s Industrial Solution in 1908, World Corporation in 1910, and the People’s Corporation in 1924 to promote his ideas. The last of these was co-written with Upton Sinclair, the muckraking author of The Jungle. To boost interest, Gillette threw much of his fortune behind the radical ideas in these books. He even proposed that Teddy Roosevelt become president of another imagined mega-corporation, this one in Arizona, offering a million-dollar incentive. (Roosevelt rejected the offer.)

In the meantime, Gillette launched a safety-razor empire, built around the idea of a t-shaped product with disposable blades. At the time of his death, in 1932, Gillette had made a fortune in razors (or, more accurately, blades), lost a lot of it in the stock market of 1929, and ultimately failed to see the realization of his corporate utopia at Niagara Falls. 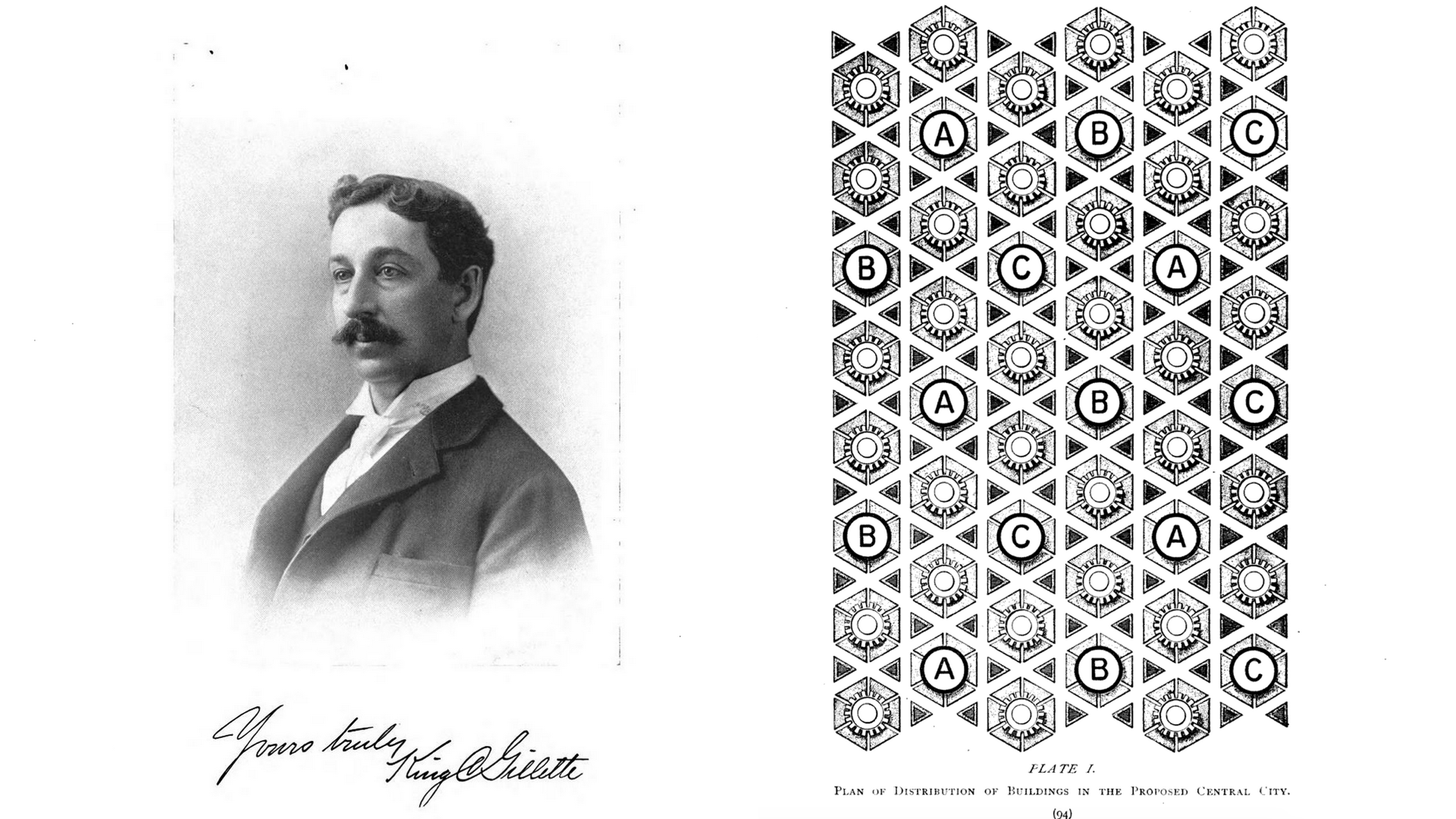 King Camp Gillette alongside his plans for the layout of Metropolis. Public domain image digitized by Google.

More than a hundred years later, a similar project is in the works: Gigafactory 2. In many respects, the factory reflects King Camp Gillette’s dream—and not just with its megalomaniac founder. Elon Musk, whose company, Tesla, Inc., operates Gigafactory 2, believes it will produce the future of solar power, and help wean the world off fossil fuels. Like Metropolis, Gigafactory 2, which promises to be the largest solar panel factory in the western hemisphere, relies on the idea of harnessing boundless renewable energy. And Tesla, Inc. chose a symbolic site for its factory: eighty-eight acres of a former South Buffalo brownfield site, previously home to the local Republic Steel plant.

The United Company, as Gillette described it, would have been the product of an age of mergers and acquisitions: “the drift of commercial affairs,” he wrote, “is moving with constantly accelerating force toward a common focus, that focus being the final control of the commercial field by a few mammoth corporations.” In the spirit of the Human Drift, the Buffalo factory came under Musk’s control through a series of acquisitions. In 2014, SolarCity, a company specializing in solar energy, bought the start-up Silevo, intending to build solar panels at a factory in Buffalo. Two years later, Elon Musk’s Tesla acquired SolarCity and renamed the plant Gigafactory 2 (Gigafactory 1 is located in Reno, Nevada, where it produces lithium ion batteries for Tesla’s electric cars).

In August and September of this year, Apple and Amazon became the first corporations to exceed a market capitalization of one trillion dollars, making each of their valuations greater than the GDP of 96% of countries where data are available. With corporations like these approaching once-unimaginable valuations, Gillette’s dream of a company “of sufficient magnitude to absorb and finally control production and distribution” appears increasingly possible.

Gillette wanted all Metropolis’s people to be stakeholders and beneficiaries of his conglomerate—not only a few wealthy investors. But he directed his call to action to a few rich businessmen, whom he aimed to frighten into action with the specter of populist revolt. If nothing were done to reform the country, wrote Gillette, the “low mutterings of discontent” from the working classes would eventually become shouts for revolution. 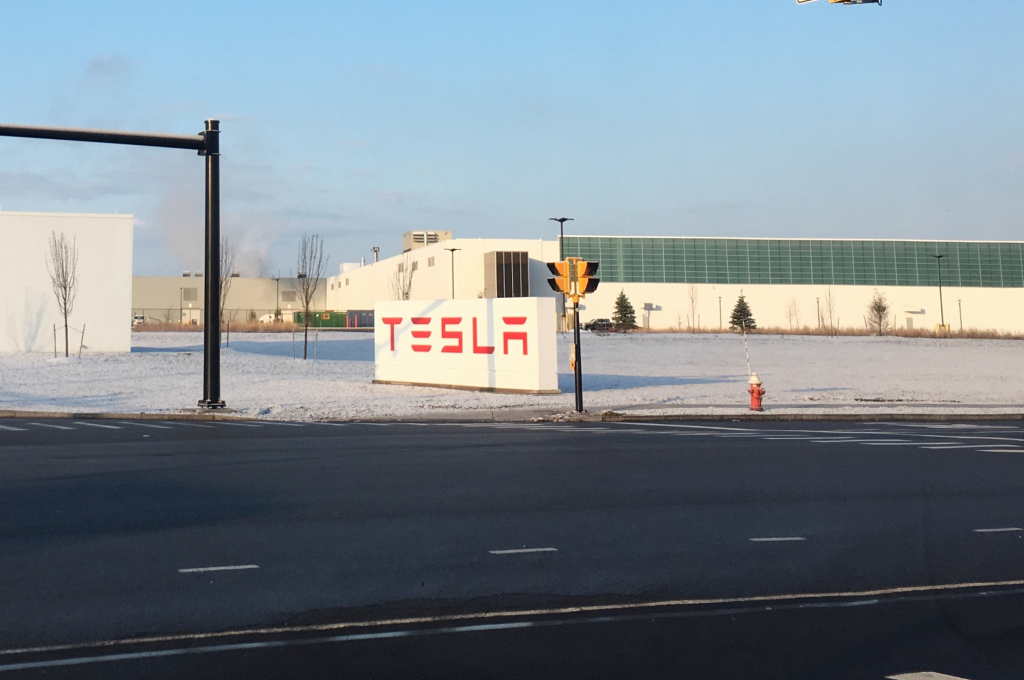 The entrance to Tesla’s Gigafactory 2. Photo via Wikimedia. CC BY-SA 4.0.

Recently, Governor Andrew Cuomo, of New York, sought to tap into more populist hopes for industrial revitalization through his large-scale funding of the SolarCity factory and other enterprises in Buffalo, in a campaign dubbed the “Buffalo Billion.” He has so far pumped more than $750 million dollars into Gigafactory 2. Cuomo’s plan was not only designed to improve the economy of New York, but also to improve his own political standing. A success in Buffalo would have been a public relations coup and bolstered Cuomo’s support in the state.

In the seventeenth and eighteenth centuries, European absolutist monarchs devised similar “Great Designs,” complex plans that combined economic engineering with political machinations to boost the economy and stabilize the politics of their realms. These designs are the historical precedents of both utopian reforms like Gillette’s and pragmatic political maneuvering like Cuomo’s. Cuomo’s plan to use the Buffalo Billion to revitalize his political image has failed in the short run, as Great Designs are wont to do—and courts have found several Cuomo associates guilty of bid-rigging, corruption, and campaign finance violations related to the revitalization package and the funding of the SolarCity factory.

In the long run, the utopian planning that launched Gigafactory 2 may or may not turn western New York state into a renewable energy hub, as Gillette and others envisioned. Tesla is still a far cry from the United Company, and Musk is no Gillette. Although the CEO called himself a “utopian anarchist” earlier this summer, he does not share Gillette’s enthusiasm for distributive justice; Musk has donated tens of thousands of dollars to protect the Republican legislative majority that passed a tax bill widely expected to increase inequality. Nonetheless, he has Gillette’s faith in the power of renewable energy to build a utopia—someday. Until then, water continues to rush down the Niagara River and over the Falls, and the successors to Nikola Tesla’s turbines churn along.

Christian Ruhl is a graduate student at the University of Cambridge on a Dr. Herchel Smith Fellowship, where he studies international relations and the history of science. He grew up in Regensburg, Germany, and Buffalo, NY, and graduated from Williams College in Massachusetts in 2017.

Belt Magazine is a 501(c)(3) nonprofit organization. To support more independent writing and journalism made by and for the Rust Belt and greater Midwest, make a donation or become a member starting at just $5 a month.