If you’ve ever watched Parks & Recreation, you’re familiar with the dichotomy between run-down yet plucky Pawnee, and far-wealthier sibling Eagleton. South Bend and Notre Dame are the real life versions. This summer, I took the train from Chicago for a visit to the two towns.

Over the course of a two-and-a-half-hour ride on the South Shore Line, East Chicago fades into Hammond, blurs into Gary, passes into Portage, and melts into Michigan City. Windows reveal a hidden Chicagoland, shrouded in iron grey clouds, deep green trees, and flecked with rust or peeling paint. The Chicago Tribune believes Northern Indiana is coming back, as priced out city dwellers find their own beach for cheap. Looking at ramshackle main streets and belching smokestacks, I’m not convinced.

After Michigan City, the train veers from the lake, eventually dead -nding at the low-slung “international” airport. Knowing there were only intermittent buses, bored cabbies eyed me for a fare. I caved and choose the sanest looking among them. Once in, the cabbie alerted me to a $2 service fee for card transactions. I realized how badly I’d been hosed by that $17 fare when just 10 minutes later we pulled into downtown. 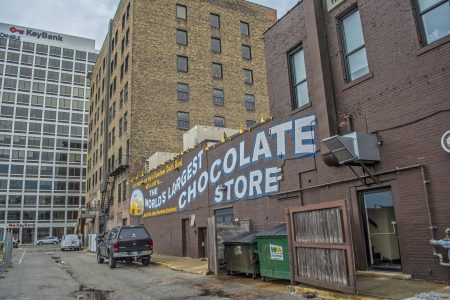 Downtown South Bend was a mess. Sidewalks simply disappeared, dug up in an apparenly endless construction project. Even during the lunch hour, pedestrian traffic was meager. A mix of local and chain restaurants line ground level storefronts, but even basics like mini-marts aren’t easy to come by. But I climbed a parking garage to grab some panoramic shots and find my bearings, and found the aerial vistas more promising. South Bend is packed with architectural gems from a more prosperous time. The County Courthouse, theaters, churches and early skyscrapers are handsomely constructed with details no longer found in modern construction.

By the South Bend Museum of Art, I spied a wooden boardwalk hugging the river. The St. Joseph River was a cascade of water, slowed by multiple dams. I had the park to myself. Along the river’s edge, I took in the sunshine, the views, and rushing sound of churning water. 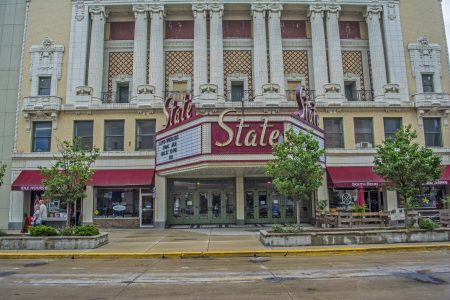 Afterwards, I boarded the #7 bus to Notre Dame; it charges up along a hill and turns northward toward campus. Notre Dame is the parallel universe of South Bend. Rundown streets and seedy looking bars abruptly ended. Houses grew larger, upscale apartment complexes became more modern, and even clothing styles looked dressier.  I arrived amongst a forest of trees and academic buildings. Campus was packed: Student Drop Off Weekend. I saw many tearful hugs before stoic fathers and blurry-eyed mothers climbed into SUV’s with Illinois, Michigan, Ohio, and Pennsylvania plates.

The iconic “Touchdown Jesus” beckoned me toward one of the many grassy malls, and with two hours to kill, I ponied up $15 in support of athletics. Notre Dame is in the midst of a $500 million building boom. The stadium is being transformed by three ten-story buildings flanking its back and sides. The school intends to turn its campus into a full-fledged destination. Everywhere I walked past shiny late-model cars, students wearing Tory Burch shoes and Lacoste polos, and plaque after plaque denoting donor-funded buildings. 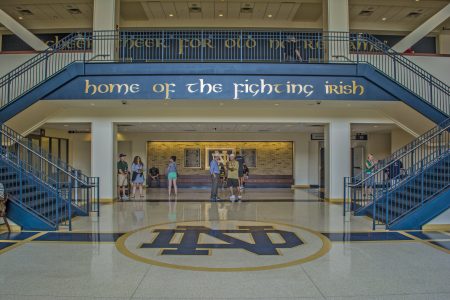 Notre Dame is beautiful: church spires, man-made ponds, grottos, and golden domes. Still, I couldn’t shake the jarring contrast between this opulence and blighted South Bend. How many dollars ever found their way back to town?

Back in South Bend, I needed a drink. McCormick’s is a classic dive in every sense. Wood paneled and filled with beer and liquor company engraved mirrors, it’s not exactly used to visitors. A few patrons glanced my way, none of them smiling. I grabbed a table, two happy hour PBR’s, and was left alone. Classic rock drifted into the background at first, then were replaced with older and deeper soul, blues, and even bygone swing songs from the 40s and 50s. A chain-smoking guy at the window was writing furiously into his journal. 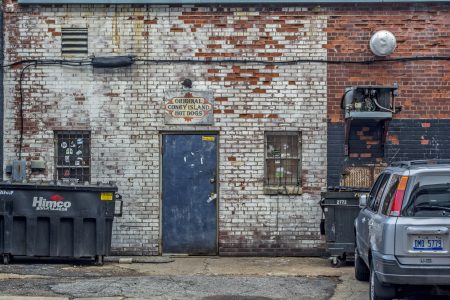 Eventually it was time to leave and head back to the airport through the thoroughly run-down and bleak-looking West Side. In Studebaker days, this was the wealthy side of town. Upon closer inspection, I could see mini-mansions in need of some TLC. At a yellow-taped Marathon station, my driver pointed out cop cars, muttering “another murder in this hole of a city.” After telling him about the day’s photo stops, he told me, “Notre Dame isn’t for people from here, people like me. It’s a lot of money and they sure don’t come to my side of town. I want to cheer for them, but I can’t.”

South Bend explains and encapsulates so much of the Rust Belt. There is equal parts pride and resentment. Pride in what was, and what still could be. Resentment at the feeling of abandonment and being left behind in the global economy. Anger towards those who do not have to, and consequently do not understand, what it is to struggle. It may be an  oversimplification, but the Rust Belt is gritty and stubborn. Its weaknesses are its strengths and its future is far from clear.

Matt Altstiel is a Chicago-based writer and photographer by way of Milwaukee and Minneapolis. Photographs by Matt Altstiel.