Wall Off Trump: Inside an RNC Action

“There’s a saying in America,” says Ian Vargas. “It’s be careful of what you wish for, you just might get it.”

Ian Vargas and Gina Perez are giving Trump what he wants.  A wall.

“We’re helping him,“ says Gina Perez, 27, who identified herself as “undocumented and unafraid.“

She drove 12 hours to Cleveland from Atlanta to participate in the #Wall Off Trump protest at the Republican National Convention this week.

“I’m building this wall for my family and sisters in the struggle,” said Perez.

Symbolizing the struggle against xenophobia, racism and sexism, the wall is a canvas panel of stenciled black painted lines, filled in by the color of clay to represent each brick. It was designed by a street artist who goes by the name Remy.

Remy, a member of the Navajo Nation, grew up next to Black Mesa, a coal mine of northern Arizona.  He refers to himself as a street artist creating radical art for his company First Seven Designs Labs. He is not from Cleveland but was invited by Organize Ohio, a collective of grassroots groups working to organize community around jobs, justice, and immigration.

“Trump wants a wall so were giving it to him,” said Remy.

A core group of 20 people began the project but more than 100 participants have been working for five days around the clock using the third floor of the Masonic Temple in Ohio City as their studio.

The painting would go on nonstop for several days, with other local social justice groups painting, brick by brick. Volunteers passed out bottles of water and tubes of watermelon flavor Chobani yogurt. A table in the hallway was laden with rolls left over from breakfast, bags of Doritos and all the fixings for beef tacos from lunch. Music kept everyone’s spirits up.  Even I recognized Monchy and Alexander, a bachata of the early 2000’s, “Te Quiero Igual Que Ayer.” 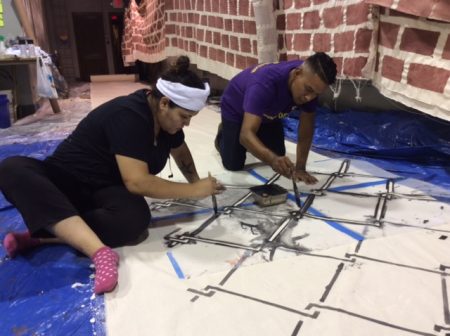 On Wednesday, July 20, the volunteers carried the banner and installed it around Public Square at 11:00 AM. A wide swath of activist groups including the Ruckus Society, Iraq Veterans Against the War, Working Families Party, Grassroots Global Justice, the Other 98%, Radio Zapote, Libre y Sin Temor, and Prevention. are participating.

Says Eva Cardenas, spokesperson for the Bay Area-based Ruckus Society, “In Cleveland we’re not just sending a message against Trump, we’re calling on everyone to stand up and take responsibility for the future of this country.”

On Wednesday morning I got in a van and rode with the people I’d been seeing all week, including Rev. Dr, Bruce Wright with a contingent from Tampa Florida. Seated beside me was Breeanna Usher, 24, a member of Organize Ohio who has been working on human rights issues in graduate school.

“Things are getting more and more unequal. It’s important to support each others’ initiatives,” she said.

She attended Monday’s End Poverty Now March. She introduced me to her mentor and professor, Larry Bresler,  director of Organize Ohio, when the van stopped to pick him up as we headed to Public Square.

“Cleveland is not a heavy Latino community – it’s mostly Puerto Rican,” he said., and added, “We should be welcoming, not push them out or demonize them.”

Vargas, 28, arrived on Saturday night from Florida. Also undocumented, he says, he is a chanter, the person who leads the group in the call and response like speech heard in a demonstration or protest.

“I believe in the power of healing through chanting,” said Vargas.  “It’s not just my own healing, but the healing of everyone in the group resisting.”

He says he took a chance by coming to Cleveland, but says he said he finds strength in the power of the chant.

“Chanting struggle is liberation and liberation is a form of healing.”

“The walls that they build, to tear us apart, will never be as strong as the walls of our hearts,” the demonstrators at the event began to sing and implore the crowd to join them. 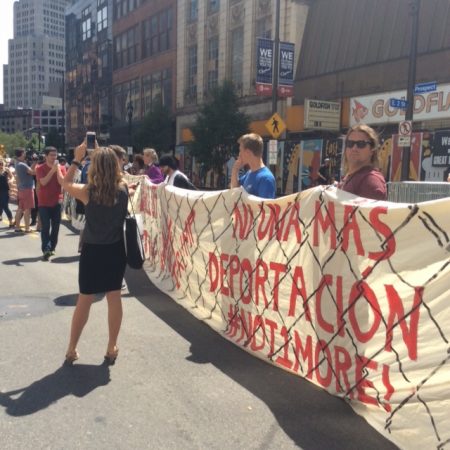 This chant had a somber, religious feel. People hearing it stood quietly and watched. At this point, one hour into action, some demonstrators invited people to join the line. I noticed three young women had been enticed and extended the wall by simply joining hands. They identified themselves as being from Indiana, but did not wish to talk.

That’s when I noticed a woman holding a sign that read: America was never great! We need to OVERTHROW This System!

She said she went by the name “Butter.”

“I was raised here. I remember when Cleveland was the place to be,” said the mother of three adult children.

“My hope is that my city takes the pride of the NBA Championships to fix our streets and give our kids the computers in school they need,” she said.

She said, she has hopes for her hometown, but said she had recently moved to Southern California with her daughter who moved there for work. She was in town just for the actions to show she cared still cared about Cleveland.

By this point in the demonstration, the chats did take a different turn, people on the sidelines who did not wish to comment, looked impatient or irritated.

“I can’t understand what they’re saying,” said a woman in a café. I asked her if she would to talk about what she was seeing, and she pointed to the table where she sat with three others to the food before them. I got it. I walked on.

And while the chants did take a different tone by the end, “Hey, Hey, Ho, Ho, this racist system has to go!” there was still this sense of hope with “Arab, Muslim, Jew and White, workers of the world unite!”

Christopher Knestrick, 35, born and raised in the Greater Cleveland Area, an organizer around housing, incarceration said the action was powerful.

“We did this in Cleveland and lots of Clevelanders came out,” he said.

This gave us strength he said, beaming. We did this in Cleveland to let Trump know hate is not welcome here.

Anna Limontas-Salisbury is a Belt RNC Fellow and a freelance journalist currently “scratching and surviving,” in Bed-Stuy, Brooklyn. She began her media career as an intern with WBAI Pacifica Radio’s “Under The Learning Tree,” with host and producer Kamau Khalfoni, and with Women’s eNews McCormick New Writers Program. She has also apprenticed with Bric Arts Media (formerly Brooklyn Independent Television), where she learned to produce segments for local television. She’s a proud graduate of the CUNY Graduate School of Journalism, class of 2008, and a contributing writer to Women’s eNews, where she writes about women and poverty.