Welcome to the Warbler Capital of the World

A man may not care for golf and still be human, but the man who does not like to see, hunt, photograph or otherwise outwit birds or animals is hardly normal.—Aldo Leopold, A Sand County Almanac

Around 7 a.m., a slow-moving caravan pulls into the Magee Marsh Wildlife Area on the western Lake Erie shoreline.

I’m one of the thousands of pilgrims who will descend on a 30-acre patch of swamp for the first day of what’s been dubbed “The Biggest Week in American Birding.” Nearly every species of songbird in Ohio visits this tiny patch of wet woods, but the crowds are here for the warblers.

Warblers are small, sometimes wildly colorful songbirds—think of a fluffy golf ball with eyes and a beak, wearing a fancy Easter outfit. Many warblers are some sort of variation of neon yellow, with markings in olive, white, red, blue and black to denote various species. Some sport contrasting hoods, necklaces, bibs or caps.

A lot of the species names are descriptive: Yellow Warblers, Chestnut-sided Warblers, Black-throated Green Warblers, Black and White Warblers, and so on. Nearly 40 species of warbler frequent Magee Marsh, each with different plumage, calls and behaviors. Generally speaking, they eat bugs and are highly migratory—following food and warmth up and down the Western Hemisphere.

Most warblers overwinter in Mexico, Central America and the Caribbean, over 2,500 miles away. On their way back north to their breeding grounds in Canada each spring, a world-famous diversity and density of warblers spends a few days refueling in this patch of woods just outside Toledo. 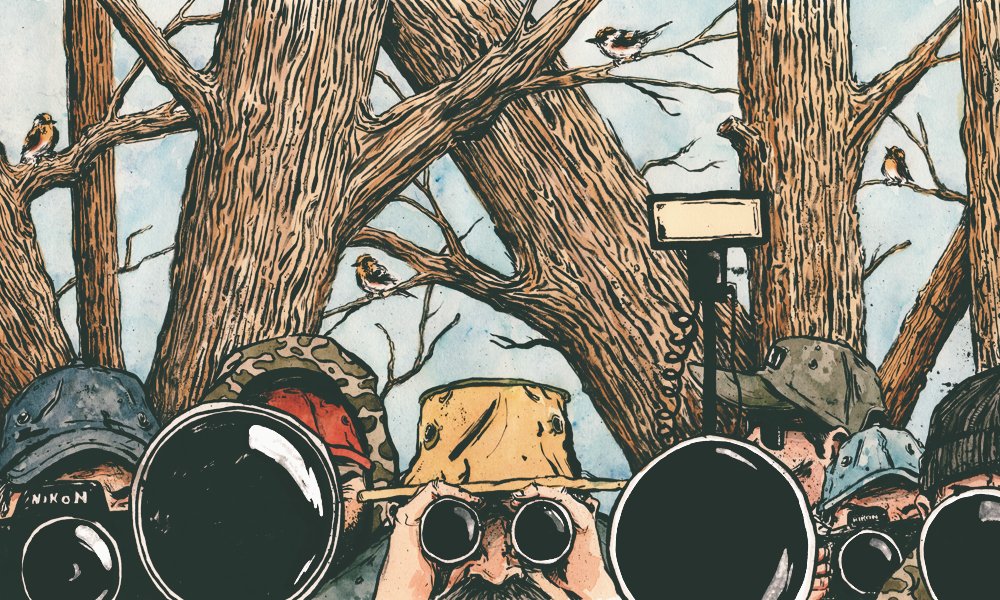 The site attracts and holds birds for a number of reasons. Primarily, the little birds are hesitant to cross the dangerous and windswept 15,000 square mile expanse of the Great Lakes on their migration path. Western Lake Erie represents one of the relatively easy crossover points on the flyway, but birds still need to stop, sleep and refuel before heading across this major migration barrier. Secondly, Magee Marsh provides specific, increasingly rare habitat on the Southern Lake Erie shoreline—a wooded beach ridge with plenty of food, water and cover.

This time of year, someone paying attention around Ohio might see a handful of warblers on a birding outing. But at Magee Marsh you would find dozens of species in a single trip. And in the event of a fallout (a birding term wherein southerly winds and storms coincide so that birds continue migrating, but stop from going further), the arrival of the warblers at Magee can cause all-out birder pandemonium.

A wave of birds will move in for a few days and move on. New birds come in with each new weather pattern. As the season progresses, different species arrive and depart.

Very few of us have an opportunity—given the demands of work, families and our iPhone overlords—to experience Nature’s extravagance. To purposefully press our faces to wild creatures’ living flesh. Though I’ve lived most of my life just a short drive from the “warbler capital of the world,” I had never seen one.

The birth of a birder

Like some of the other authors I’ve read in Belt, I moved away from Ohio for a career, and moved back for family. I was shocked at how much I found out I didn’t know about my home. Getting to know Ohio is what led me down this rat-hole into birding.

Here’s an easy experiment: Look outside a nearby window. What is that tree, specifically? What species? Is it native or introduced? How to find out? OK, what about that little brown bird—what’s its species? Is it native? Is it here all year, or does it migrate? What does it eat?

If you have the answers to those questions, good for you. But I didn’t know anything about the living things I saw every day. I didn’t grow up in a techno-bubble or in the inner city. I grew up hunting rabbits in the fields, picking apples in the orchards and grapes on my grandmother’s farm. My boyhood home had a huge swamp in the backyard and woods teeming with squirrels. But I never learned more than the minimum—almost nothing—on how to name and observe the species, or timings of migrations or emergence, or how to interact with my environment beyond the superficial.

We never spent any time on this kind of nature appreciation at school. Science education had to keep up with testing standards, with advances in abstract fields like molecular biology, genomic research, and organic chemistry. Meanwhile, our wild lands are vastly altered by development, and native-species diversity is falling off a cliff.

We are losing the opportunity to take inventory of these things, to ask questions and understand where we came from and where we are going. Our landscape is still incredibly biologically diverse, but our minds use shorthand—symbols to process images quickly. You see a duck, and your mind immediately begins to substitute what you’re actually seeing with a composite mental reference of a duck, and you no longer notice the details.

When you start naming all of the living things around you, the more subtle and amazing species start to emerge through the noise. I’ve become aware of dozens of birds, frogs, and plants that I would never have known lived here.

We’re lonely people, living in a lonely time. Look at your Facebook feed, hundreds of your closest friends crying out to be noticed. But when you can name every bit player in your ecosystem, and can notice the drama unfolding around you every day, you tend to feel less disconnected. I started out with a handful of field guides, naming visitors to my birdfeeder, and then my hobby swept me up.

My wife finds my new birding obsession embarrassing. I’d been an avid fly fisherman for most of our lives together, and she could explain to people why I was missing their toddler’s birthday party or another faculty cocktail event. But this?

Something about birding strikes her as effeminate, a hobby for silly old people. Her warrior-alpha-male husband is now tip-toeing around the woods with retirees, bowing in reverence to every sparrow. She didn’t marry Gary Snyder, she married some asshole from Akron. I think I get it.

But there is something deeply satisfying in cataloging all this diversity—this wildness, unmade.

Aldo Leopold wrote, “A satisfactory hobby must be in large degree useless, inefficient, laborious, or irrelevant.”

Uselessness doesn’t jive with the Rust Belt work ethic—wherein every action, even recreation, needs to have a purpose, needs to pay off somehow. Birding doesn’t seem to have any purpose beyond its own enjoyment. It’s not like fishing or woodworking or some other hobby where you have some tangible object or output. You have a list, some memories, maybe photos.

So far, I’ve developed none of these skills.

Magee Marsh State Wildlife Area is 2,200 acres, but the focus is usually on the bird trail, a mile-long elevated boardwalk. There are twenty-three stations along the boardwalk, each noted with a specific kind of habitat and expected bird activity for various times throughout the day. 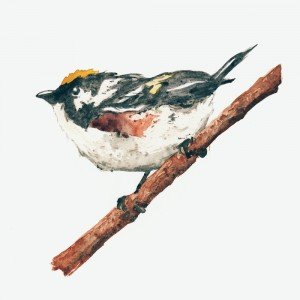 Twisting willow trees corkscrew out over the pathway in the marshy sections; giant cottonwoods loom over the middle of the loop. The boardwalk passes through a pond and a marsh. It’s incredibly varied habitat in such a tiny circuit. Almost everywhere is a tangle of brush—a bird labyrinth. The warblers can hide, but luckily they can’t stand still.

They seem to pop in and out of existence, alighting right above your head on twigs and branches just starting to leaf out. Shy, rarer species are caught in half-glimpses off in the middle distance. Some hawk-eyed expert calls it, and dozens of people cluster together, raise their binoculars and mutter to each other, sharing whatever details they can about this rarity.

On my visit, the gold morning light filtered through barely-formed new leaves adding an unreality to the gorgeous, unbridled wildness.

We tried to kill this place, in 1903, draining the marsh to convert it to farmland. The marsh persists, not because of conservation,but because we couldn’t keep it dry. Lake Erie kept rolling back onto the newly drained fields during spring storms. Like almost all of the last best places, Magee Marsh is protected because development efforts didn’t work financially, not because of foresight.

From 1920 to 1950, Magee Marsh was a private duck-hunting club. The state purchased the land in 1951 and turned it into a wildlife area. Now, thousands of people amble up and down the boardwalks every day at this time of year, to the point that the infrastructure can’t handle the traffic.

A brusque Ohio Department of Natural Resources, Division of Wildlife employee with a screw gun powerwalks through the crowd of birders, securing boards that wiggle loose from the amount of foot traffic. Almost every board wobbles, after bearing the pressure of thousands of marching feet.

The guy with the drill doesn’t give a shit if I’m taking a photo of some rare visitor. He shouldered underneath me, and started screwing the board an inch from my foot. He’s clearly not a birder. In fact, he seems annoyed at the entire event.

Birding tourism contributes $36 billion to the U.S. economy annually, but the Davis-Besse Nuclear Power Station four miles down the road is Ottawa County’s biggest employer. Folks in Michigan can see the cooling tower looming over Lake Erie on a clear day.

The cultural and economic divides between the locals and the birders is real—and nearly unbridgeable.

The ODNR created business cards for people following the Lake Erie Birding Trail to hand out at local establishments, to let the proprietors know that their business is being supported by bird-watching enthusiasts. As if the $400 Patagonia jackets and $3,000 cameras hanging off their necks weren’t notice enough.

Not that all of the non-birders were abrasive. A tall, Ron Swanson-looking wildlife officer walked through the crowd, pistol and riot club strapped to his hips. He smiled wide, flirting with old ladies and joking about managing the rowdy crowd. They assigned the right guy for the job.

A woman in front of me pointed out a Great Crested Flycatcher in the top of a nearby tree, its golden flanks flashing the sun. Through the binoculars, it looked like a phoenix, like something you’d see in a David Attenborough nature special about wildlife in Costa Rica.

I realized that six months ago, this bird probably was in Costa Rica.

Which is what makes the people who are crazy about migratory songbirds great conservationists—they’re not out to just protect the patches of habitat in their backyards—they have to protect the habitat in other parts of the globe. The various links in the birds’ habitat range need to be supported, or the whole thing will collapse.

I looked up again at this bird that flew 3,000 miles to perch in the top of a tree outside of Toledo, Ohio.

Matt Stansberry was born in Akron. He spent the last six years in Oregon writing about fly fishing and environmental issues, and moved back to the Cuyahoga Bio-Region as part of the Bigfoot Witness Protection Program. He blogs at Ohio Outdoors and Wildlife.

More of David Wilson’s illustration work can be found at dwillustration.com.

Do you like what we do here at Belt? Consider becoming a member, so we can keep it coming. Our supporters get discounts on our books and merch, and access to exclusive deals with our partners. We are a locally-owned small business, and rely on the support of readers like you. Thanks for reading!