What’s In A Vowel? In Search Of The Disappearing Short-A Rising

Last Thanksgiving, I was in Houston, visiting my wife’s family.

“How far is it from here to Dallas?” I asked my sister-in-law.

Using the speech patterns I picked up during my childhood in industrial Michigan, I had pronounced the name of Texas’s second-largest city “Dayul-is.” That’s what linguists call “short-a” rising, and it’s a signature feature of the Inland North accent, a barbed, nasal strain of English spoken in the Lower Great Lakes region, from Rochester, N.Y. on the east to Davenport, Iowa, on the west – an area roughly coterminous with the Rust Belt. (It’s said to begin between exits 41 and 42 on the New York State Thruway. East of that invisible line, in Syracuse, people say “soda.” West of the line, in Rochester, they say “pop.”)

Accents are an important element of regional identity. An important element of Midwestern identity is believing you don’t have an accent, that you speak a neutral brand of standardized English from which all other Americans deviate. It’s not true. In fact, those of us from the Upper Midwest speak a strain of English so revolutionary it’s changing the way vowels have been pronounced for more than a millennium.

[blocktext align=”right”]Accents are an important element of regional identity. An important element of Midwestern identity is believing you don’t have an accent … It’s not true.[/blocktext]The Inland North accent as we know it began to develop in the early 20th century, as a result of one of the most remarkable linguistic transitions of the modern era: the Northern Cities Vowel Shift. Vowels whose pronunciations had been stable since feudal England suddenly began taking on new inflections in the mouths of Upper Midwesterners. The changes were first detected by linguists doing field research in Chicago and Detroit in the late 1960s. In his book Dialect Diversity in America, University of Pennsylvania linguist William Labov describes them as a series, or chain, of changes. The Northern Cities Vowel Shift affected five separate vowel sounds, but Labov believes it was triggered by the short “a” that makes the word “Dallas” incomprehensible to Texans.

“The logic that connects these five changes resembled a game of ‘musical chairs,’” in which each inhabitant of a position moves one unit to dislodge the next,” Labov wrote. “The initiating event appears to be the shift of short-a in bat to a front, raised position, a sound very much like the vowel of yeah…Into the gap created by this shift, the vowel of got moves forward. In the most extreme form, cot sounds like cat, block like black, socks like sacks…The vowel of bought then moves down and front toward this position, along with other members of the “long open-o” word class: law, talk, cross, dawn, dog, etc…Short-e then shifts to the back toward short-u, producing a confusion between desk and dusk as short-e enters short-u territory. Most recently, short-u has responded to the intrusion by moving back, producing the potential confusion between busses and bosses, cud and cawed…The chain shift has come full circle.”

These pronunciations should sound familiar to anyone who has eavesdropped on a conversation between two on-break sales associates at the Golf Mill Mall in Niles, Ill., or ordered a coney dog and fries from a waitress at Angelo’s Coney Island in Flint, Mich. For an audio demonstration, here’s Labov discussing the Shift with Robert MacNeil on the PBS series Do You Speak American? And here’s an Inland North accents compilation I found on YouTube. (The Cleveland Browns fans at the end are the most perfect example ever of the Northern Cities Vowel Shift.)

“Just in terms of numbers, you’re talking about a lot of vowels moving around, that’s a pretty significant thing,” says Matthew Gordon, an associate professor of English at the University of Missouri. “Some of these particular vowels, the short i, the short a, the short e, those have been pretty stable throughout the history of English, for over 1,000 years.” 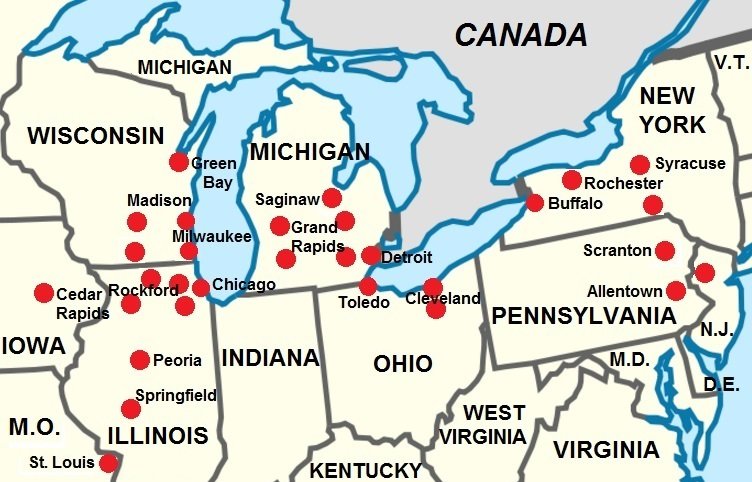 While researching his University of Michigan doctoral thesis, Small Town Values and Big-City Vowels: A Study of the Northern Cities Shift in Michigan, Gordon listened to recordings of Grand Rapidians born in the late 19th century. None of them produced the vowel inflections associated with the Shift. (Neither did President Gerald Ford, who was raised in Grand Rapids in the 1910s and 20s.)

“When you listen to them, they don’t sound at all like modern Michiganders,” Gordon says. “All the evidence seems to show the Northern Cities Shift got started some time in the 20th century, and really got ramped up. Definitely, the first half of the 20th century was when it progressed to the point you would really hear it like you do today.”

But why did the Shift start then, and why has it been confined to the Inland North accent region? Labov theorizes that its origins date back nearly two hundred years, when New Englanders, New Yorkers, and immigrants arrived in upstate New York to dig the Erie Canal. From this melting pot of dialects emerged a single system, in which the short “a” was always raised. The new dialect then spread westward, as settlers followed the canal into the Great Lakes.

However, both Gordon and David Durian, a linguist who studies Chicago speech, have observed that the fronting of the short “o” – the phenomenon that makes Saturday Night Live’s Superfans talk about “Polish saaahsage” – appeared in Midwestern speech before the raising of the “a.”

“That suggests to me that maybe it’s the ‘box’ vowel – pronouncing ‘box’ like ‘baaax’ – that got it started and sort of pushed the other ones out of the way,” Gordon says.

(SNL also mocked the Inland North accent with “1-600-LANSING,” a fake ad about a phone sex line for men turned on by women with nasal Michigan accents.. So did Family Guy: you can hear the raised “a” and fronted “o” in this clip about a Wisconsin nymphomaniac.)

At graduate school in Ann Arbor, and during his research in Chelsea and Paw Paw, Gordon found that Michiganders were perplexed by his interest in their accents, because, of course, there’s absolutely nothing exotic about Michigan speech. I myself was not aware that short “a” raising is unique to the Upper Midwest until I went away to the University of Michigan, where a student from New Jersey pointed it out to me.

“It’s part of the reputation the Midwest has of being the standard,” Gordon says. “This is particularly strong in Michigan. Michiganders are very convinced that they speak without any kind of accent. I think that that ideology: this is standard English, this is the English that broadcasters use, kind of leads people to not hear how different their speech is until they travel outside the area. … I went to grad school at the University of Michigan, and when you talked to students in linguistics classes, one of the questions they ask you is, ‘Why don’t we have an accent?’ I think that feeling of speaking in a somewhat pure way is more particular to Michigan. I think Chicagoans have a stronger sense that there’s something interesting going on with their speech. It’s something about the Michigan educational system, just growing up in Michigan is being taught that Michigan is perfect.”

[blocktext align=”left”]As the Rust Belt has become less powerful, less populous, and less influential, so has its native accent.[/blocktext]Chicagoans, on the other hand, have been altering their distinctive speech patters to conform to “standard” American speech, says Durian, a native of Chicago’s south suburbs and an adjunct professor of English at the College of DuPage in Glen Ellyn, Ill. The tendency to replace “th” with “d” – as in “dese, dem and dose” – has been disappearing.

“It’s kind of like what’s happening in Pittsburgh,” Durian says. “People would say you knew you were in Pittsburgh because you heard people say ‘dahntahn’ all the time, instead of ‘downtown.’ Among speakers born after 1980 or so, they’re not doing that ‘dahntahn’ thing anymore. They’re starting to pronounce it like the rest of the country, where it’s more of a normal pronunciation. I think the same thing is happening in Chicago, and it’s for the same reason. It’s become so stereotyped as a pronunciation, and it’s pointed out so often in speech that people are actually shifting away from it.”

In fact, Durian is beginning to hear the Northern Cities Vowel Shift weaken among younger speakers. Its rise to linguistic distinction and its subsequent subsumation into generic American speech seems to be coterminous with the industrial Midwest’s own rise and decline. As the Rust Belt has become less powerful, less populous, and less influential, so has its native accent.

“When they were going through a period of growth, up until about 1950, the times that these vowel shifts were most active were up through that sort of World War II period,” Durian says. “And then what happens from 1950 to 2000, you see the shifts slowly beginning to shift towards eroding. So it seemed that as the population decreased in these cities, that’s also had an impact on the shifts beginning to erode.

“We’re now starting to hear speakers who were born in 1990 or 1995 going back or starting to show some reversal of some of the Shift traits,” he continues. “For example, they’re starting to back their cot vowel, the short ‘o’, back to where thought is. They’re not showing any further advancement of raising short ‘a.’ Possibly among these younger speakers, we may be starting to see the emergence of a more generic American accent. … I think regional identity still matters to some extent, but I don’t think it matters as much as it did fifty years ago. I think now people are more likely to identify with the idea that you’re a Midwesterner, rather than a Chicagoan or a Clevelander. That may be having some influence on reducing some of those stronger characteristics.”

First the Rust Belt lost its factories, then it lost its people. Now it’s losing its accent, too.

___
Edward McClelland is the author of Nothin’ but Blue Skies: The Heyday, Hard Times and Hopes of America’s Industrial Heartland.