When The Number 9 Bus Was Like Home, And Downtown Was My Playground

This essay appears in Rust Belt Chic: The Cleveland Anthology.

I strained my neck to look down the row of occupied orange seats to see who was getting on the bus. A big crowd — I should slide over close to the window, scrunching my book bag on my lap, leaning my head against the window, closing my eyes, pretending to sleep, one eye partially open to see who would sit next to me. The bus was already full, and we were only at E. 55th Street. The bus was full of strangers who were also friendly and familiar: some faces I’d see each day, some that I would greet, some that would start up a casual conversation.

Five days a week, for about six years, the Number 9 bus was a morning and afternoon home away from home, a place where I could finish homework, take a nap, or eat a snack (if I remembered to bring one). I boarded at 12th and Euclid, right in front of the old Halle’s building, just a block away from my apartment building (the then relatively new Park Centre complex at 12th and Chester — the European spelling of “Centre” always felt a bit out of place in the otherwise down-to-earth downtown neighborhood). I’d ride past Cleveland State (then primarily the Rhodes and Fenn towers); past the long stretch of old houses, former mansions, some boarded up, all showing their age; through the lively intersection at E. 105th and Euclid, where the “community billboard” posted by Winston Willis gave regular updates on his struggles to hold onto the land (and warned, prophetically, of the coming Clinic empire); through University Circle and though Little Italy, in the days before cafés lined the sidewalks; past the Lakeview Cemetery (with its imposing gates and tall stone monuments visible from the road); by Coventry, eventually the hangout place of choice for my wannabe-hipster friends; beyond Severance Center, when it was a real mall (not a Walmart), with a two-screen movie theater and a Hough Bakery; through the manicured suburbia of Cleveland Heights; and eventually to the edge of the posh Gates Mills suburbs at the sleepy Eastgate Mall and then the private high school where I was a student. 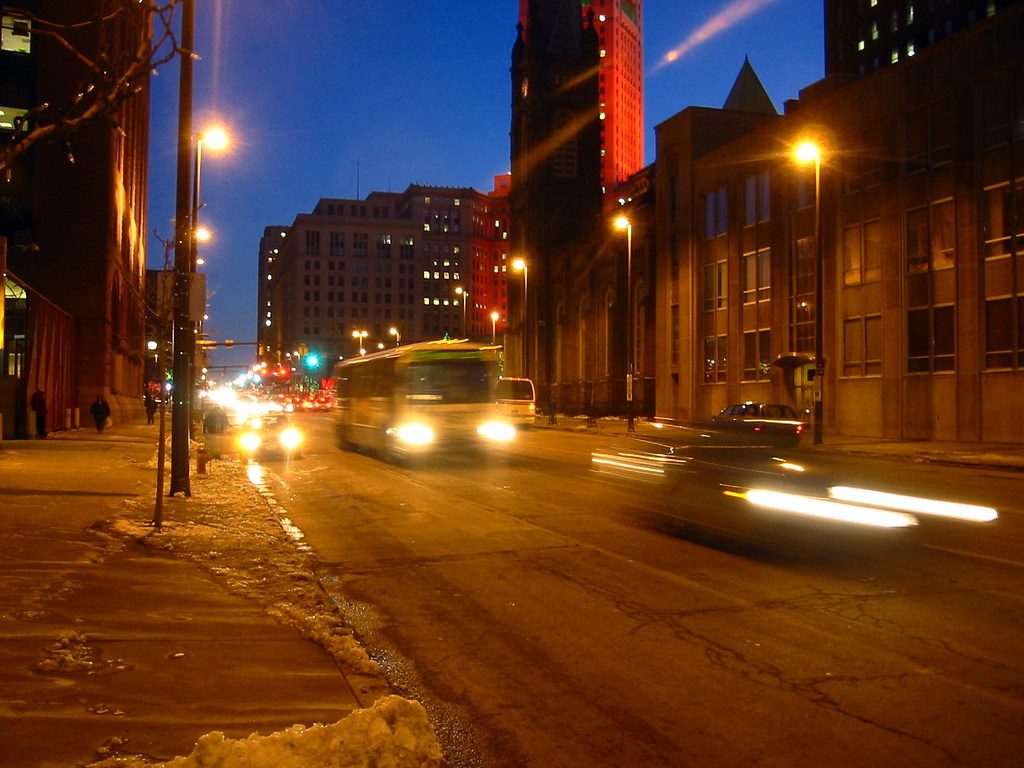 The bus ran slowly in the winter when passengers had to leap over the large slush puddles at the curb to board; it was hot in September and May. I got to see the buses change over time — the older buses, without air conditioning and with old-fashioned cords to pull when your stop was coming up. These were replaced by MARTA buses, hand-me-downs to Cleveland from the Atlanta transit system, the faded outlined of the “MA” still visible despite the attempt to convert MARTA to RTA. Then came the new buses, with bright orange seats with brown plastic backs (did RTA adopt those colors because of the Browns?) and windows that didn’t open but with air-conditioning on board. I saw those buses become worn too, windows forced open when the air-conditioning didn’t work, vinyl seats slashed open, graffiti on the seat backs.

This trip through the city on generations of buses took me through the Cleveland that some would call gritty, a place some suburbanites kept at arms length. But to me, equipped with a teen’s ability to find creative outlets in any environment, downtown Cleveland was a wonderful playground: My geeky friends and I would go to retro films at CSU (I vividly remember a M.A.S.H./Catch-22 double-feature — a dream for geeky, literary teen boys of the 1980s); I had Chester Commons (now Perk Park), with its Day-Glo striped paint on giant concrete walls as my own private skateboard park, and during the summer, I would delight in going to a different place — the old Erieview Fountains, the Malls, Chester Commons — for a different food truck lunch experience long before food trucks were cool (the best steakburgers I’ve ever had were grilled on a truck in Cleveland in the 1980s). I spent many Saturday afternoons in the awesome video arcade in the Colonial Arcade.

I was delighted when I had the chance to bring my suburban friends into downtown, or when school field trips would bring all of us to the theaters downtown — on the reverse of my commute. What was a daily ritual for me was an exotic voyage for those who only rarely descended from the Heights. I still remember the controversy when my school chose to have its prom at the Old Arcade (perhaps an early sign of newly emerging “rust belt chic” aesthetic, but more likely part of the preppy phenomenon of the 1980s known as “slumming”); some parents insisted that “the voyage into downtown (at night!) was too dangerous for their children, so a school bus shuttled the students from the ’burbs to the appealing but fearsome downtown in sheltered safety.

[blocktext align=”right”]To some, it is old and gritty; to some chic and hip; for me, more simply, it’s home.[/blocktext]I left Cleveland long ago, only to return recently to Northeast Ohio. I am bemused to find that the concept of “Rust Belt chic” is all the buzz, that the environment that I took for granted is now the rage, the cool place to live and play. The fantasy of my early teen years was that I would one day be a member of the hipster set. Perhaps unbeknownst to me or my friends, I was cool all along, and now the rest of the world has caught up.

Yet it was neither “grit” nor “chic” that made Cleveland (and my bus voyages) feel like home, that make these memories so vivid: It was the friendliness, the vibrant atmosphere, and the sense of community on those crowded buses.

When I come into downtown Cleveland today, I still marvel at the new things (the crowds on East Fourth, folks rushing to the theater in Playhouse Square, a baseball stadium that actually has unobstructed views of the field); take in reminders of the past (the buildings that I will always refer to as “Higbee’s,” “May Company,” and “Halle’s,” or my old apartment building, which is now an Embassy Suites hotel); and annoy my children by regularly pointing out the things, now long gone, that I still remember (the old Ninth Street Pier, the storefronts that used to be comic book shops or video arcades. To some, it is old and gritty; to some chic and hip; for me, more simply, it’s home.

___
Order the The Cleveland Anthology here.

Sean Decatur is the President of Kenyon College.