“Where the Waters Reflect the Clouds”


Minnesota has always been a Native place. The state takes its name from a Dakota phrase, Mni Sota Makoce, which translates to “land where the waters reflect the clouds.” While the state’s capital is the other Twin City (St. Paul), Minneapolis is the largest city in the state. Its English name also draws on the Dakota word for water, mni. When added to the Greek word for city, “polis,” the city became Minneapolis. The city’s Dakota name is Bdeóta Othúŋwe, Many Lakes City. For the Ojibwe, it’s known as Gakaabikaang, At the Waterfalls. The city is known for a number of things: it’s the setting of The Mary Tyler Moore Show; it’s home to the state’s professional football, baseball, and men’s and women’s basketball teams; and it’s where Prince was born and honed his musical career.

Minneapolis, though, also has a long history as a home to Native activists and organizers. It’s the birthplace of the American Indian Movement, which was founded in the summer of 1968 as a response to continued targeting by police officers and continued instances of police brutality. It’s been home to American Indian survival schools, and it boasts a number of Native owned and operated businesses, community centers, and housing developments. In recent years, Native activists in and around the Twin Cities have led the charge to restore the original name of one of the city’s most popular lakes, and they’ve toppled a bronze statue of Christopher Columbus that had stood on the grounds of the Minnesota State Capitol since 1931. This post draws on the Indigenous history of what’s now Minnesota to highlight this rich history of Indigenous activism. 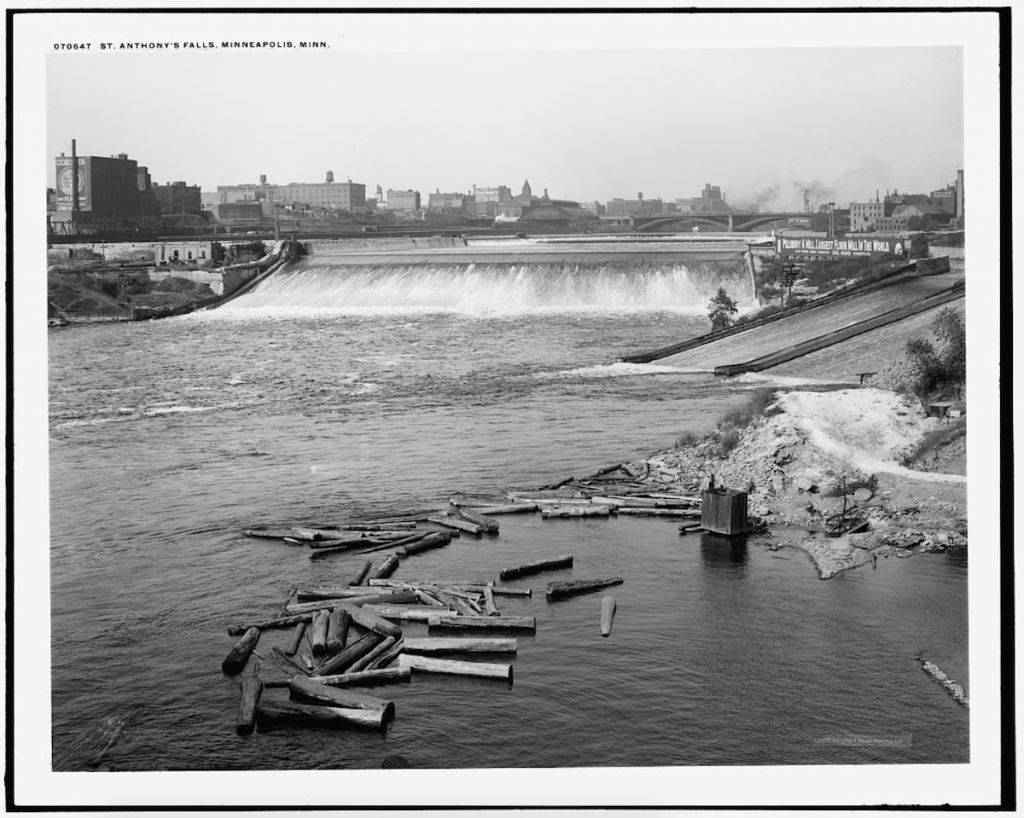 The confluence of the Minnesota and Mississippi Rivers is a sacred place for the Dakota. It’s a place they call Bdote, “where two waters come together.” The Dakota have called the place that now includes Minneapolis their home for centuries, and there’s also a long Ojibwe history in the region. The United States acquired the land where the city now sits through a series of treaties negotiated with the Dakota and through treaties with European nations. England had claimed the land on the east side of the Mississippi River, while France and Spain had both claimed the land on the other side of the river. Regardless of the fact that this was Indigenous land, the land on the east side of the Mississippi River was wrapped into the 1787 Northwest Ordinance, while the land on the west side was tied to the 1803 Louisiana Purchase. The Dakota ceded the land that now includes Minneapolis as part of the 1805 Treaty of St. Peters, and the city grew around the highest waterfall on the Mississippi River, which Catholic priest and missionary Father Louis Hennepin had named the Saint Anthony Falls. The Dakota called it Owámni, Falling Water, and the Ojibwe called it Gichi-Gakaabikaa, Great Waterfalls. Minneapolis was incorporated as a city in 1867, and its prime location on the river led to the city’s industrial development.

There’s only so much space here to draw attention to the Indigenous history of Minneapolis, so I’m going to skip to the middle of the twentieth century when federal Indian policy once again turned toward assimilationist ideologies. That’s not to say, of course, that Minneapolis didn’t already have a significant Native population. But the federal policy known as Relocation, which was codified under the 1956 Indian Relocation Act, was a deliberate push to assimilate American Indians by moving them away from reservations and into major cities like Chicago and Denver. Minneapolis wasn’t an official relocation city, but it had a relocation office and effectively served as a relocation destination.

The influx of predominantly Ojibwe and Dakota people to the city led residents to both literally and figuratively build their own communities, and it happened in relocation cities across the country. The American Indian Movement (AIM), for instance, got its start in Minneapolis. Native activists created AIM in the summer of 1968, and it soon grew from a local patrol to a national force in the 1970s. AIM members were among those who helped establish the Heart of the Earth Survival School in Minneapolis in 1972, which served K-12 students for more than thirty years before it closed in 2008. Native community members founded the Minneapolis American Indian Center (MAIC) in 1975, and it’s one of the oldest urban Indian centers in the country. MAIC sits on Franklin Avenue in the American Indian Cultural Corridor, just a short walk from the Pow Wow Grounds coffee shop, the Native American Community Development Institute, and the Minnesota Indian Women’s Resource Center. 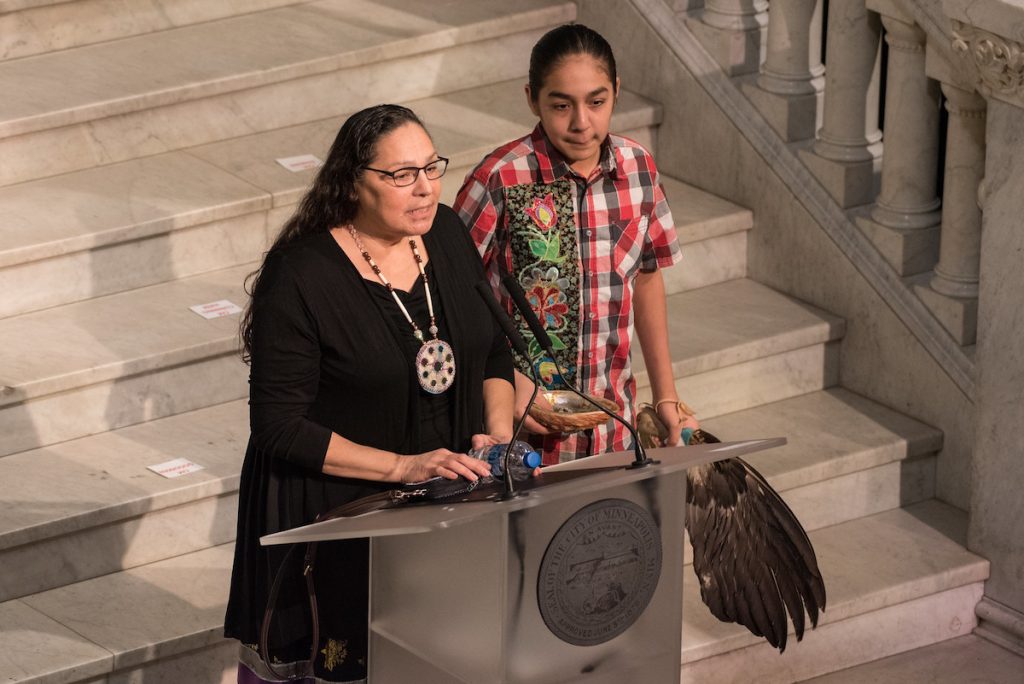 As a city within the state that claims to be the land of ten thousand lakes, Minneapolis is known for its popular Chain of Lakes. Some folks run, walk, or bike around the lakes, while others enjoy boating, paddleboarding, or gathering along the lakeshores. The Dakota call the biggest lake Bde Maka Ska, or White Earth Lake. John C. Calhoun, the U.S. Secretary of War, sent the Army to survey the area around what’s now Fort Snelling in 1817 and authorized the construction of the fort. The surveyors renamed the lake in his honor, and the name stood for almost two hundred years. But Calhoun was well known as a proponent of slavery and Indian removal. Indigenous activists spent years fighting to restore the lake’s original name, and the battle was renewed after the 2015 Charleston church shooting. This may seem like an odd connection-–tying the fight to reclaim an Indigenous Minnesota place name to the deliberate killing of Black churchgoers in South Carolina–but the link between the memorialization of the Confederacy and the continued reverence paid to enslavers underscores the drive behind the Bde Maka Ska name reclamation. It took five years and many disputes between and among local residents, Native activists, the Minneapolis Park Board, Hennepin County commissioners, the Minnesota Department of Natural Resources, the Minnesota Court of Appeals, and the Minnesota Supreme Court before the change finally became official.

The death of George Floyd at the hands of Minneapolis police officers in the summer of 2020 pulled the city back into the national and international spotlight. Protests began in Minneapolis and St. Paul, and other protest movements gained momentum across the country and around the world. Protesters pulled down statues of men like Edward Colston, Christopher Columbus, and Juan de Oñate, while the Robert E. Lee statue in Richmond became a canvas for creative reinterpretations. As historians Mattie Harper and Peter DeCarlo have shown, the Columbus statue that formerly stood on the grounds of the Minnesota state capitol was erected in 1931. St. Paul was just one place where Italian Americans, tired of the racism and xenophobia they faced, made a concerted effort to change the narrative and redefine their place in America and in American history. The 2020 takedown wasn’t the first time the statue had been the subject of scrutiny. In fact, advocates had worked to remove the statue since the early 1990s. In early June, Indigenous advocates and activists took matters into their own hands; amidst the sounds of drums and songs and dances, the statue came tumbling down. Recent events have forced Minneapolitans and Minnesotans to reckon with the state’s treatment of historically excluded populations. For the original inhabitants of what’s now Minneapolis, though, resistance and activism are nothing new. ■

This essay was originally published by The Metropole, the official blog of the Urban History Association, as part of its Metro of the Month series on the Twin Cities.

Katrina Phillips is a citizen of the Red Cliff Band of Lake Superior Ojibwe. She earned her BA and PhD from the University of Minnesota. She is currently an assistant professor at Macalester College in St. Paul, Minnesota, where she teaches courses on American Indian history and the history of the American West. Her first book, Staging Indigeneity: Salvage Tourism and the Performance of Native American History, is scheduled to come out of the University of North Carolina Press in the spring of 2021. Her next book project will look at activism, environmentalism, and tourism on and around Red Cliff.