White Racist Aggression At The U. Michigan Game

While Hurricane Irma churned toward Key West after ravaging the Caribbean, more than 1,500 miles north in Ann Arbor, Michigan, the scene was picturesque and gorgeous.

Perfect game-day weather made that much better by the game’s outcome. A relatively inexperienced team of Michigan Wolverines had just beaten the pesky Cincinnati Bearcats by a comfortable margin (36-14) to remain undefeated in the young college football season. The dream for one of those elusive undefeated seasons remained intact for at least another week. 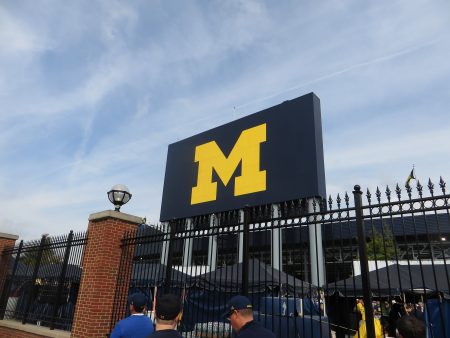 After filing out of Michigan Stadium, my wife and I were among the throngs of fans and spectators walking north up South Main Street, passing a line of idling automobiles along the way that were inching forward in the same direction. We were stopped at the Hill Street intersection, waiting to cross, when a young couple came up on my left.

They were an attractive pair. Boyfriend and girlfriend? Young lovers? Most likely.

She, the young woman, was wearing a Michigan home jersey, stretch blue jeans and white sneakers. Blond hair draped her back shoulders in a way reminiscent of how some football players allow their long locks to hang out irreverently from their helmets. Her overall appearance, however, was in no way masculine.

No longer in 2017 Ann Arbor—one of the most progressive cities in the Rust Belt, if not the nation—it seemed we had been transported back to 1870 and were now witnessing a torch-wielding, hooded nightrider on horseback making a non-negotiable demand.

He, her mate, also wore blue jeans topped off with a fitted dark olive T-shirt with shallow V-neck that looked like something he might have bought at the fashionable Topman shop on the Magnificent Mile in Chicago. Broad-shouldered, with defined pectorals and biceps, the young man looked like he could have been a slot receiver or a defensive back in the game that had just ended. Though maybe a couple of years older and a bit stockier, he reminded me a little of my son, hanging out with his now ex-girlfriend.

Unlike us, they seemed to be in a bit of a hurry, the way young couples can be. Rushing to a post-game tailgate party? Hooking up with friends at one of the nearby college bars? Or maybe they had something more private in mind for the remainder of that delightful Saturday afternoon. The possibilities were many.

They paused beside me just long enough for him, the young man, to finish checking his phone and for them to find a crease in the stalled traffic before continuing across South Main Street. Once on the other side of the street, the pair disappeared into the crowd of Maize-and-Blue-adorned supporters ambling north.

The light changed and we then made our way across the street, too.

Moments later, less than a block north of the intersection, my wife and I caught up with the handsome young couple.

I didn’t immediately recognize him. And then I did. He was now making his way promptly back toward another guy of smaller stature.

The smaller guy made a hasty retreat to a nearby ground-floor apartment tucked inside a beige, three-story building that resembled a bunker with its flat roof and jutting boxed balconies. I couldn’t hear what he might have said, if anything, while fleeing. His attempt to slip behind the safety of the sliding-glass patio door failed as the young man, trailing close behind, blocked it before the door could be shut.

The young man, who could have been my son, gripped the patio door firmly with both hands and, with a powerful shake or two, appeared to dislodge the door from its track. He left the door askew before walking away. He fumed visibly but was otherwise finished with the confrontation. He rejoined his girlfriend on the sidewalk and they turned to leave.

As my wife and I moved passed the building, we then heard a loud, raspy voice call out:

Was the racist armed and ready for violence? Did he have several Proud Boys with him waiting to ambush? I didn’t know for sure.

The word spewed forth, as if the syllables were being dragged over whiskey-soaked vocal chords. No longer in 2017 Ann Arbor — one of the most progressive cities in the Rust Belt, if not the nation — it seemed we had been transported back to 1870 and were now witnessing a torch-wielding, hooded nightrider on horseback making a non-negotiable demand to the occupants of some darkened, isolated sharecropper’s cabin.

I stopped and looked back in the direction whence it came. In doing so, I saw the stunned looks of those trailing behind me. They had heard it, too. The slur was more than intentional; it was more provocation, it seemed.

The speaker then appeared on the lawn like a grotesque, fat spider emerging from its hole into the sunlight after having ensnared prey in its web. Middle-aged and jowly, he looked like a poor man’s Steve Bannon — slouchier, more disheveled with his salt-and-pepper hair combed straight back. He wore wireframe glasses, a Hawaiian shirt and grungy shorts.

Yes, we had heard him — loud and clear. The young man, to whom the slur was directed, had heard him, too; stopped and made a beeline in his direction. En route, he blew by my wife and me.

The racist, either realizing he’d trapped something in his web larger than he’d bargained for, or seeking justification for further escalation, retreated to the role of victim.

“I ain’t paying for shit!” the young man retorted on his march toward him.

At that point, I wasn’t sure what to think. Was the racist armed and ready for violence, a la George Zimmerman who stalked and killed Trayvon Martin, and then cried self-defense after Trayvon had tried to defend himself? Did he have several Proud Boys with him waiting to ambush that lone young man as he circled back?

I didn’t know for sure. I didn’t have clear line of sight, given the number of pedestrians and the presence of a large spruce tree near the apartment’s entrance. But the likelihood of violence was palpable. And then what? In the eyes of the law, defending one’s dignity and right to exist was not a defense against charges of property damage, a threat of home invasion, and possible assault.

So, I trailed the young man as he headed back.

“Bruh?” I said, standing behind him. “Bruh, I’m with you. I got you.” I then touched his right shoulder lightly, not wanting to startle him. “Let it go. It’s not worth it.”

For a split second, in that a moment of fury, I thought he might  take a swing at me as he turned around. Perhaps seeing that I, too, was a black man was the only thing that stopped it from happening.

“I’m tired of this shit!” His fists were balled-up tight and his jaw still tense with rage. His stare bored a hole in concrete sidewalk.

“I’m so tired of this shit!” he repeated. “All the time!” He stomped off with his girlfriend in tow.

In the fog of conflict, I don’t know whether the young woman said anything in the aftermath. But she was clearly distraught, her face wracked with distress that seemed to go beyond the disturbance that had just ended. 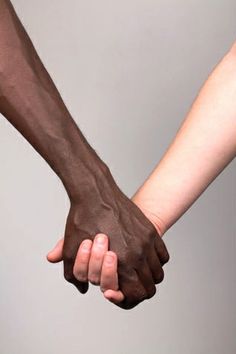 I couldn’t help but think about something I’d read that morning over breakfast. I had been scanning my Twitter feed when I came across an “Ask Amy” advice column published in that morning’s Detroit Free Press. The headline read: Parents want to kick me out over interracial relationship.

A woman in her “early 20s” had written to seek advice on how to deal with her parents who were upset about her interracial relationship. She wrote: “They say, ‘This world already has enough problems; you don’t need to add this one to the mix.’”

I guess it’s probably too much of a coincidence to think that maybe that letter to Amy had been written by that same young woman who was now walking away with her boyfriend. But who knows? Either way, she’s not alone, unfortunately.

Young love doesn’t always last. It can be fleeting for a variety of reasons. Whether their relationship goes the way of so many young relationships and dissolves, I hope it’s not over an accumulation of stress brought on by the kind of bullshit that dropped on an otherwise beautiful Saturday afternoon.

As my wife and I resumed the trek to our car, a man who had witnessed the incident with his young son said to us: “Good thing he didn’t say that to me. I would have decked him.”

Really? I thought. If only it were that simple.

Bob Campbell is a writer and former newspaper reporter based in Flint, Michigan. His nonfiction narrative, “Spirit of Sam Jones,” was published in Belt Publishing’s Flint Anthology in June 2016. His last essay for Belt Magazine, “The N-Word: Let’s Cease and Desist,” was published in June 2017. His forthcoming nonfiction narrative, “Calling on Lady Day and John Coltrane,” which explores the racial implications of the 2016 presidential election, will be published in The Forge Literary Magazine.