The Polish Christmas Eve Feast that Helped Me Find Home


My Indiana hometown isn’t pretty. Peppered with smokestacks and smelling of refined corn, it’s grey, hard, industrial. But one day each year, I find beauty there.

Wigilia, which translates to “vigil” in English, is the epic Polish Christmas Eve feast. A solemn, sentimental celebration, it lasts hours and includes twelve meatless courses, featuring mushroom soup, carp, herring, rye bread, pierogi, sauerkraut, gołąbki (cabbage rolls), honey vodka, and desserts like kołaczki. It’s a tradition my refugee grandparents brought with them when they immigrated in the 1950s to a neighborhood teeming with Polish churches, delis, and bakeries. Other than their children, my grandparents had no U.S. family, so it connected them to home.

My family isn’t exactly artsy. Some work at mills or the electric company. My mother is a paralegal and my father is a social worker. But on Wigilia, everyone lets a little poetry and magic in. Growing up, I remember my mill-worker grandfather singing folk songs, roughneck uncles donning fresh sweaters and haircuts, my mother eating as much dessert as she wanted, my father delivering eloquent blessings, my grandmother smiling (rare), my quiet brother telling jokes, and my sister coaxing everyone out of their shells.

Each year, we spend days preparing. On the morning of Christmas Eve we visit shops for fresh fish and bread. Then we decorate the tree and adorn folding tables with linens, china and poinsettias. Once stars are visible in the sky, we put on holiday reds and sparkly tops. My grandmother’s crystal catches the candlelight.

Before the supper begins, we pass oplatek—flat, flavorless wafers embossed with the nativity scene. Starting with the host, one at a time each person breaks off a piece of the wafer, then kisses the person next to them and wishes them good fortune. Though the feast is family-centric, we often gather with friends before and after to break oplatek and do vodka toasts; (“na zdrowie!” means “to your health”). Hosts set out an extra chair and plate for unexpected visitors, both to represent Mary and Joseph and to symbolize absent loved ones.

When I was growing up, one neighborhood family always held a late-night afterparty, and we’d play with the kids of my dad’s boyhood friends, whom we call kuyzn (cousin) to this day.

My grandparents’ memories were complicated. Babcia worked in a forced-labor camp and met Dzia-Dzia at a displaced-persons camp. When I called their engagement “romantic,” Babcia said that everyone had to form new families since so many of theirs had been killed. She told me the women used the same white dress for the many weddings.

We continued Wigilia after my grandparents died in the early aughts. Sometimes we invited friends to join, but since neither my siblings nor I have kids, our dinners shrank, becoming intimate but lonely. We’d spend them reminiscing about my grandparents, whose reality was sometimes grim, burdened by the traumas of the past. My mother’s Slovak family had already lost most of their customs. Without my grandparents’ insistence on traditions, and another generation to carry them out, what would our legacy be? I’d long forgotten the Polish I learned at language classes. Without Wigilia, who was I? 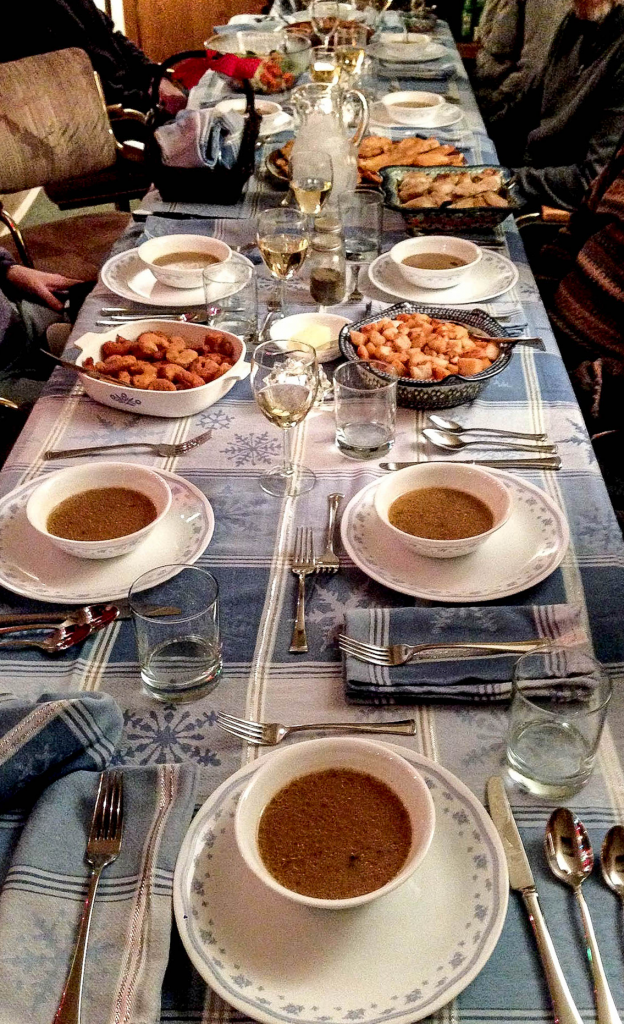 In 2007, my sister reconnected with our Polish family, traveling to Poland and visiting their village. She returned with my father in 2009, giving him the chance to meet his cousins, aunts, and uncles for the first time. For my part, I began mining photo albums and found a 1930s photo of a mystery woman linking arms with someone in a bear costume. Captivated, I made it my Facebook profile photo, and within days, a Polish man with my grandmother’s maiden last name messaged me. “In your picture I saw my father’s mother. [She] was Wladyslaw and her daughter [was], Janka? If so, you’re family.” My grandmother was Janina, and we confirmed that he was my father’s first cousin.

Then, in July 2017, my parents, brother, sister, and I traveled to Eastern Europe and began connecting names from my grandmother’s stories to faces. As we spent time in their homes, we saw old photos of our graduations and holidays. We realized that, since my grandparents had sent our photos for decades, our relatives knew exactly who we were. Not only that, our round, upturned noses and wavy, dark-blond hair were an exact match to theirs.

During the trip, we visited the church where our family has worshiped for six hundred years and reveled at a cousin’s wedding. Over tea with his aunt, my dad (“Tata”), turned to me and said, “They know us.” In this town a continent away, we were known. When we saw our name on hundreds of headstones at a graveyard, I started tagging Instagram posts with #ancestralhomelandpilgrimage.

Our relatives put out a new spread of food every few hours. A typical lunch was cutlets, carrot salad, sauerkraut, beets, pierogi, cordial, and tort cakes. But the breakfasts were magnificent: compote, smoked fish, cheese, rye bread, yogurt, coffee, fresh mint tea and sausage. These spreads hearkened Wigilia, and, during a broken conversation, we found their Christmas Eve traditions almost identical to ours—except that, at their table’s extra place setting, we had been among the symbolic ghosts. Unlike us, they had a deep sense of belonging, and we, the American family, were the only missing piece in their story.

A week later, when we met my grandmother’s family, we found my uncle’s smirk identical to Babcia’s, and that, like her, he was a vivid storyteller. We compared Wigilias, and again found their traditions remarkably similar to our own.

We ended the trip in a Slovakian village in the Tatra Mountains, with the goal of locating my mother’s great-grandmother’s grave. When we found it—a worn cross—my stoic mother wept.

It wasn’t until I returned home to Chicago that it hit me: the extent of everything my ancestors had left behind. I began to feel myself a part of something ephemeral but important—something to do with land and storytelling.

I’ll never lose Wigilia because it’s a not just a tradition; it’s a way of being.

The Wigilia that followed the trip was different. When we passed the oplatki,
we remembered our ancestors, but the table didn’t seem small. We’d spent the weeks before the holiday exchanging cards with our Polish family. We’d liked each other’s Instagram posts and used mushrooms foraged by Uncle Marek in our consommé. Over dessert, we imagined my grandparents as refugees, sailing the Queen Elizabeth, steeled for adventure.

That day, I felt that same refugee hope, connected across continents and decades. I’m grateful for forging a real connection to my Polish family. But what affected me most deeply was the recognition that my grandparents’ sheer will to survive was so strong that nothing could stop it—not war, prison, oceans or illness. They, like all immigrants, conjured a life from thin air. Setting an extra place at Wigilia was a beautiful gesture, but in truth, the alchemy of creating kin where none existed was something they practiced, all year long, for most of their lives. They learned to find family in their neighborhoods, churches, delis, bakeries, and pharmacies. And, whether my siblings and I produce ancestors or not, that’s something we’ve taken into the world: That when you have nothing, you can still create something; you can still find your people.

I’ll never lose Wigilia because it’s a not just a tradition; it’s a way of being. This year, the extra chairs on Christmas Eve will symbolize not just those who’ve died or aren’t present, but the family we have yet to meet—the ones who’ve been waiting to know us all along.

Gretchen Kalwinski is a writer whose work has appeared in the Chicago Reader, The Dodo, and Orbitz. She holds an M.F.A. in Creative Writing from Northwestern and previously worked as an editor at Time Out Chicago and elsewhere. Her essay “Illiana”  was included in Rust Belt Chicago: An Anthology.