House on the Rock at Sixty

Approaching six decades of existence, one of the strangest places in the Midwest continues to defy easy description.


I am alone today inside the Infinity Room, a horizontal spire extending out for two hundred unsupported feet above the green-turning-yellow trees of southwestern Wisconsin. There are three thousand panes of glass here, including a particularly gut-tightening one embedded in the floor at the end of the room. Amid the day’s fog, rain, and wind, I can feel the room listing, slightly, back and forth. Or so I think.

That’s the thing about The House on the Rock: nothing, absolutely nothing, can be taken as certainty. It is an “ever evolving reality,” as the travel brochure puts it. Even now, after nearly sixty years of operation, the place defies pretty much all definitions that have been tried: a carnival fun house, a disorganized museum, an architectural conundrum, the consummate tourist trap.

Today, I’ve traveled at reasonable speeds from Iowa County, Iowa to Iowa County, Wisconsin, home to House on the Rock, the hymn I learned in church as a kid, the one about the wise man who built his house upon the rock, humming in my head. I came here first as a kid. My grandfather was married here too (the second time). My mother still describes the place as “mind-blowing.” My favorite description of it, though, is from a friend, who asks: “Don’t they just have shit all over the place?” 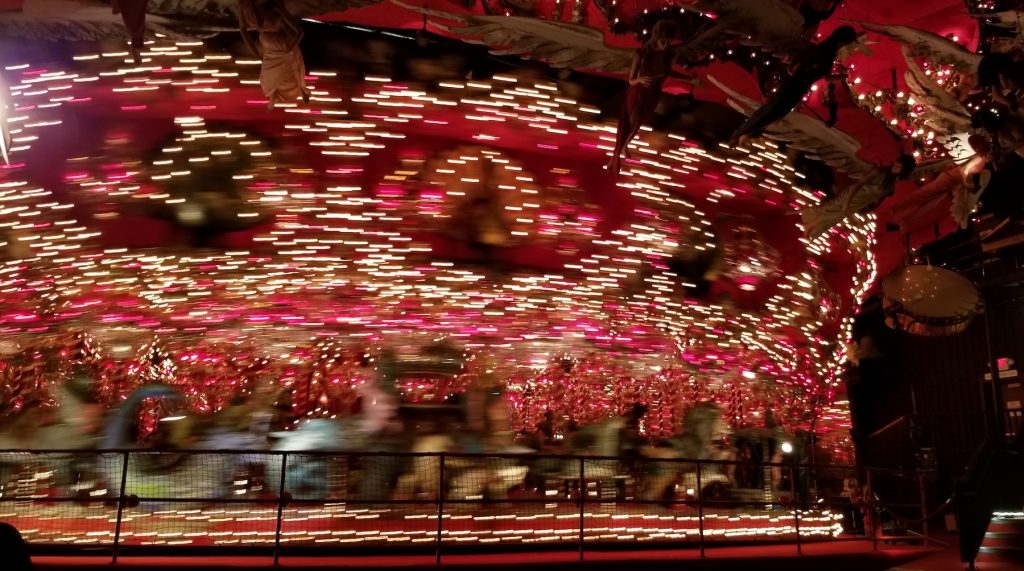 To me and many others, The House on the Rock is sacred, the ultimate American ephemera. Our longtime guide to peculiar places, Roadside America, calls The House the “Seventh Wonder of Roadside America,” and author Neil Gaiman made The House on the Rock a key setting in his fantasy novel and subsequent television show, American Gods. The television show filmed parts of its second season all across the attraction last year, but made particular use of the World’s Largest Carousel.

The carousel spins today as I approach it, 269 carved creatures moving at once—and not a single horse among them. Organ music plays ceaselessly from somewhere, and the carousel never stops. It is one of the few attractions in the entire complex that has an information placard, and so those of us here on a Thursday afternoon all take pictures of it—some facts to later match our bizarre photographs.

The House on the Rock is the fantasy of Alex Jordan, Jr., who first became acquainted with Deer Shelter Rock, here in the Wyoming Valley, while on picnics in the Forties. Eventually, he rented the land from a local farmer and started building something permanent on the sixty-foot chimney of rock. Jordan had worked for his father’s construction company, but had no formal architectural training himself. Still, he built a small studio with a fireplace where he would retreat from his home in Madison. With funding from his parents, Jordan purchased the entire two hundred and forty-acre property a few years later. By 1960, local residents were anxious to see what Jordan had been doing up there. He let them in, at fifty cents a head, and it’s been open to the public ever since. 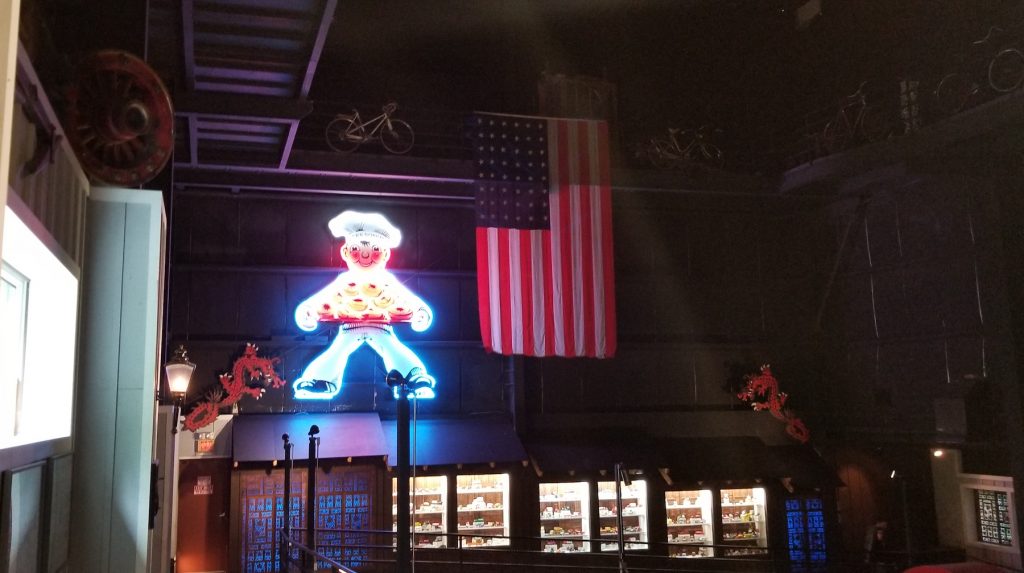 Even in miniature, this place would be overwhelming. As it stands, across nearly three square miles, The House on the Rock imparts a sense of complete disorientation. It takes several hours to complete the entire tour, billed as “The Ultimate Experience.” Apart from the Infinity Room, it is often difficult to determine whether you are at any point above or below ground, as everything seems to be in shadow and many of the “windows” are merely an illusion, backlit by unseen bulbs. 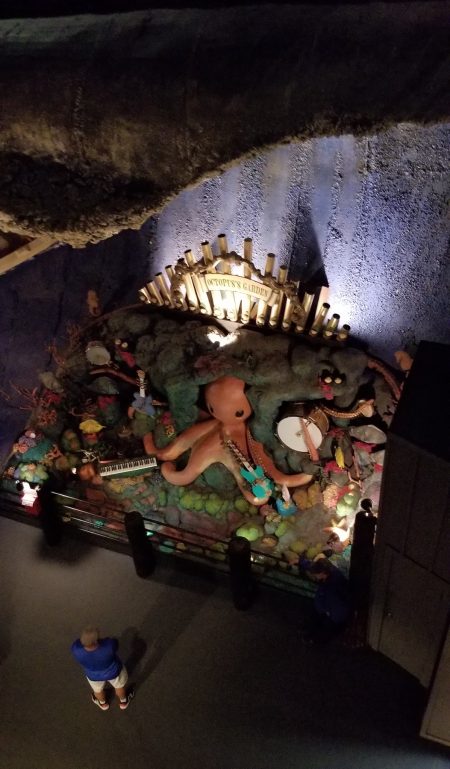 Usually, collection implies purpose. Objects—The World’s Largest Ball of Paint, or The World’s Largest Collection of the World’s Smallest Versions of the World’s Largest Things—are gathered together for a specific reason. Education, maybe, or continuation. But it seems the only intention behind the things gathered together at The House on the Rock is that they are all…well, strange, especially when considered as a whole. A partial list includes: miniature circus figurines, beer steins as long as your leg, scrimshaw and ivory carvings, life-sized staged battles of knights on horseback, rooms full of doll houses, a two hundred-foot cement sea creature and accompanying Octopus, complete with a music box that plays the Beatles’ “Octopus’s Garden.”

All standard roadside attraction logic has been suspended here for the sake of something that can only be described as spiritual, even religious. In both scope and construction, The House on the Rock is not unlike the grottos that fill this part of the Midwest. Those concrete altars, embellished with paint, glass, petrified wood, broken pieces of china, and other cast-off items, certainly served as some sort of inspiration. While the path through is determined, the tour of the complex is entirely self-guided. While you are alone on your journey, it never quite feels that way, as hundreds of faces of mannequins, figurines, dolls, and statues return your stare throughout the attraction. Some of the “antiques” housed here are actually reproductions, imported from around the world or created by Jordan and his team right here on the grounds. Nobody seems to mind, though. 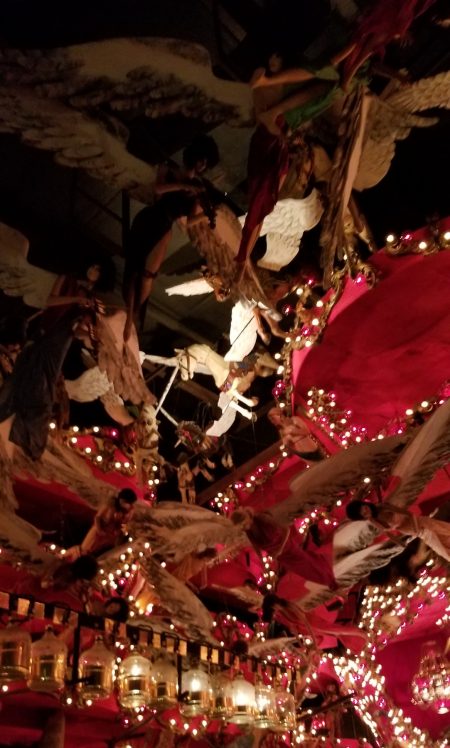 Tokens can be purchased throughout the tour, to activate the mechanical orchestras and player-less music machines, the fortune teller booths and coin-operated mechanical figurines, housed in cabinets at every turn. Whatever tokens are left over at the end can be passed on to entering visitors, as was done to me, or exchanged for a discount at the gift shop. I used the latter to purchase a cassette tape filled with recordings of the various machine-operated music numbers, self-released in 1989 and reasonably priced, thirty years later, at $1.85.

Unlike other, more practical collections in museums with rotating displays and exhibits, nothing at House on the Rock has really changed since Alex Jordan died back in 1989. Outside of the Christmas season, when more than six thousand Santa Claus figurines make an appearance, and “The Dark Side Nights” in October, when the house stays open late, everything is essentially the same as Jordan left it.

You can find a similar situation five miles up the road, where Frank Lloyd Wright’s eight hundred-acre estate, a home/studio/school known as Taliesin, is pristinely maintained, precisely as he left it. Jordan opened The House on the Rock to the public a year after Wright’s death, and the two complexes have been mired in competing, connected local myths ever since. What those five miles between them have come to represent—between organic architecture symbiotic with nature, and frameless construction now on the verge of being swallowed up whole; between practised order and intentional, relentless disarray—says a whole lot about America, and the people who have driven here along Highway 151over the last sixty years.

The faltering of the House on the Rock has always been inevitable: Wisconsin winters haven’t been kind, and after six decades, the house has begun to look its age. Today, renovations are being done on some of the mechanical orchestras. (Where they found people with the skill set to fix machines such as these is yet another mystery.) There are also buckets and office trash cans propped up throughout the complex, collecting rainwater that dampens and seeps through stained glass, or pours through the ceiling in a steady stream. At the entrance of the Infinity Room, the maintenance team is running a Shop-vac along a particularly soaked area. 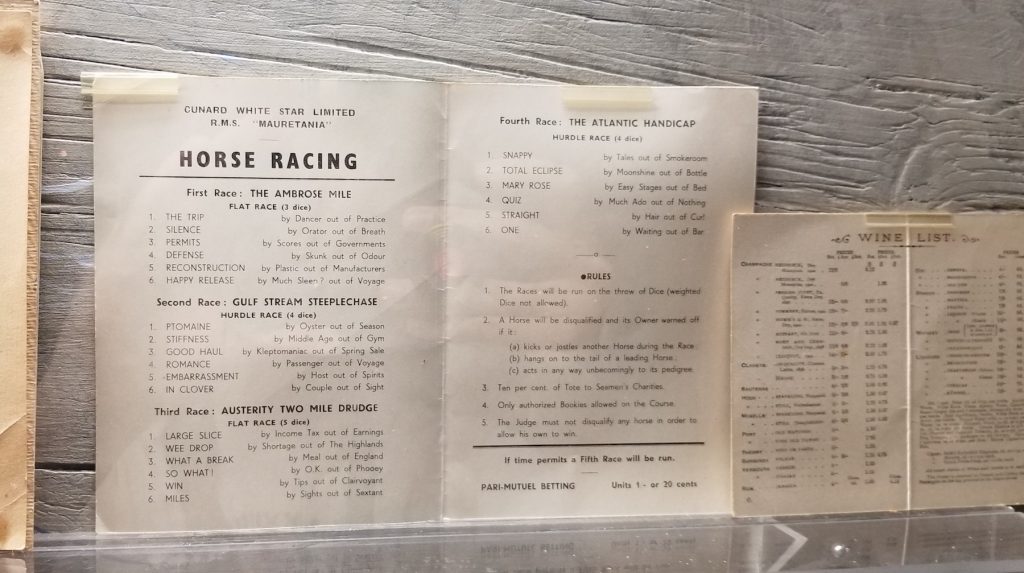 No matter what Alex Jordan himself was attempting to worship, or maybe defy, The House on the Rock has gone on to become what all American attractions in time eventually do: a tourist trap. Since 1989, when the attraction was sold to Jordan’s long-time business associate Art Donaldson, The House on the Rock name has grown to include an Inn in nearby Dodgeville, and a Resort in Spring Green. The Resort comes complete with an astonishing twenty-seven holes of golf offered in southwestern Wisconsin, tentatively scheduled between April and November. Weather permitting, of course.

Yet, by existing at all, The House on the Rock has created its own mythology—an unassailable altar of a collection, seemingly immune to cynicism. The House works as an architectural Rube Goldberg: deliberately over-complicated, each hallway and staircase a falling domino until you eventually spill out back into the gift shop. What’s still up for debate is what the House has been trying to do all these years. Just when you begin to piece together a meaning for all of it, a gallery or an exhibit takes you somewhere else, with no real context as to what you have just seen, erasing all possibility of an actual purpose. Many visitors have come to be entertained, inspired, even educated. But others, like me, come simply to be overwhelmed and confused, to stand in awe of something that will never make logical sense. 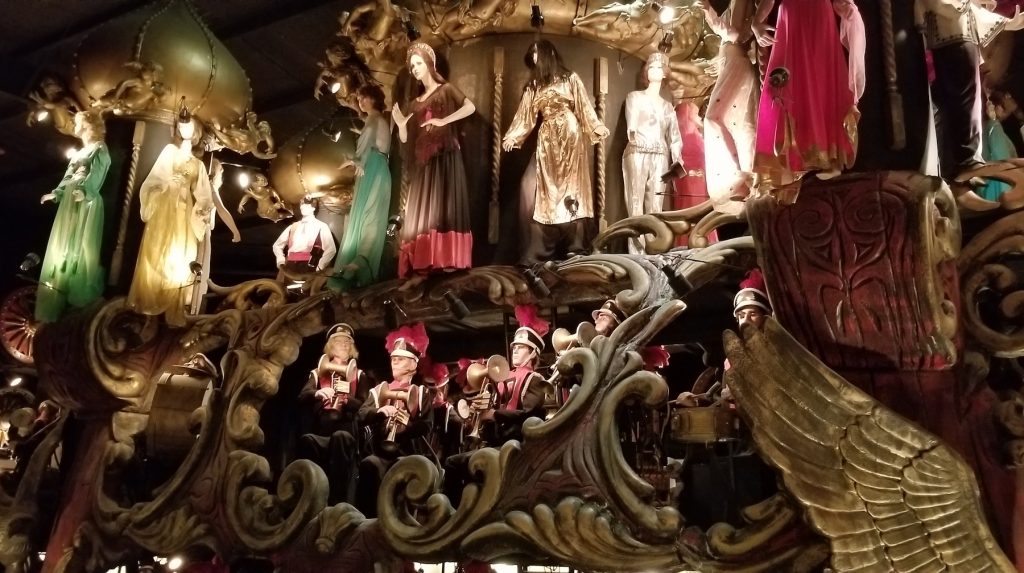 Jordan himself, whose ashes were scattered over the attraction after he died, might have described it best when the World’s Largest Carousel first opened back in 1981. That day, as he watched it first turn, he simply said, “A wonder—nothing less.” ■

Cover image of the Infinity Room at House on the Rock from three-quarters of a mile away. Photo via Wikimedia (CC BY-SA 3.0).