The Woman in the Red Glasses: Jane Scott Gets a Documentary

A few months ago, I found myself wasting time on WarbyParker.com, scrolling through page after page of attractive frames. I hadn’t bought new glasses in years and, thanks to a brand-new prescription, was desperately in search of the perfect pair of red glasses. Then I saw them — rum cherry-colored “Marshall” glasses — and knew I had to have them.

Whenever someone compliments the glasses, which I wear almost daily, I thank them and say, “Aren’t they so Jane Scott?”

Most of the time, people have no idea who I am talking about, so I am more than happy to educate them about the legendary Plain Dealer rock writer and columnist, who died in 2011 at age 92.

Throughout her life, Jane always stood out in a crowd, thanks to her trademark oversized red-framed glasses, platinum blonde bouffant, and the overstuffed purse she carried everywhere. 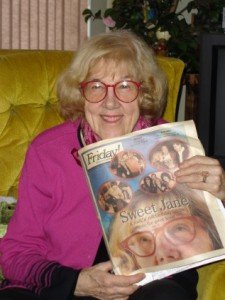 Jane Scott at her Lakewood apartment in 2005. Photo by Elizabeth Weinstein.

It may seem odd to take fashion advice from a deceased rock journalist — especially one whose signature look remained constant amid decades of shifting fashion tides, but I can’t think of anyone I would rather emulate in style and in life.

Which is why I found myself driving through rain-soaked traffic after work last Monday, from my home in Columbus to the House of Blues Cleveland, to mingle in a sea of more than a hundred people who had gathered to remember and honor Jane.

The event was called “Jane Scott & the Beatles 50th Anniversary Celebration,” and the main purpose was for the organizers, members of Friends of Jane, LLC (a newly formed documentary production company), to raise funds for Jane Scott Rocks!, a forthcoming official documentary film on the life and times of Jane, the legendary rock writer and columnist at The Plain Dealer for 50 years. 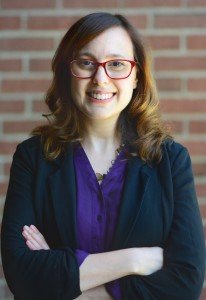 The author in her Jane Scott-esque eyeglasses. Photo by Lisa Eggert.

As the title suggests, the event also paid tribute to the 50th anniversary of the first show that the Beatles played in Cleveland, on September 15, 1964, at Public Hall, because that concert marked Jane Scott’s entry into the field of rock journalism.

As Jane, who at the time was in her mid-40s, stood among thousands of screaming, fainting teen girls that night and witnessed their raw passion for the music, she knew she was witnessing the future of rock and roll.

Gradually, she shifted the focus of her teen pages to rock music, which at the time no one was covering as a regular newspaper beat. Not in Cleveland. Not anywhere.

[blocktext align=”left”]Spero recalled attending a Rock and Roll Hall of Fame dinner in New York and chatting with Paul McCartney. The first words out of Sir Paul’s mouth were “How is Jane Scott?”[/blocktext] The “Jane Scott & the Beatles 50th Anniversary Celebration” began with a forum featuring DJ Billy Bass, promoter Norman Wain, musician Michael Stanley, music manager David Spero, and 19 Action News’ reporter Dawn Kendrick — all involved in the documentary project in various ways. Thomas Kelly, who produced the event and is the documentary’s director, asked everyone to share memories of Scott. And there were many.

Bass told the audience that Jane once suggested he change his name from William to Billy — and he listened. “I never stopped flirting with Jane,” he said, adding that she never quite flirted back.

“She was the only person in the world I’ve never heard anyone say anything bad about,” rocker Stanley, who was the subject of many a Jane Scott article over the decades, said about his favorite critic. “Every local band’s dream was to appear in her Friday! magazine column.”

Spero recalled attending a Rock and Roll Hall of Fame dinner in New York and chatting with Paul McCartney. The first words out of Sir Paul’s mouth were “How is Jane Scott?” And Wain, who helped bring the Beatles to town for their 1964 concert, laughed while describing how he helped sneak Jane in to interview the band, despite their specific request not to talk to any media.

Kendrick, the only female on the panel, had the most glowing praise for Jane. “She was as iconic as the rock stars she covered. She transcended all generations,” she said. “We need to tell the younger generations to pass on her legacy. She was someone you want to look up to.”

I was 25 years old when I first learned about Jane Scott. Having grown up in Columbus in the days before widespread Internet access, I didn’t have the privilege of reading her columns as a child. But when I began researching the topic of women in rock journalism for my master’s degree at Ohio University, in 2005, it didn’t take long for me to come across her name. Jane Scott was a triple threat – the first rock journalist for a daily newspaper, the first female rock journalist and, later, the oldest rock journalist on the beat. And, perhaps most unusually for a rock journalist, readers — and the rock stars she wrote about — almost universally adored her.

I spent days reading her entire back catalogue of concert reviews and then arranged to interview her on a blustery February day at her Lakewood apartment. I was, needless to say, a nervous wreck.

She opened her door, welcomed me in, and offered me pie and orange juice (because “orange juice is healthy for you”), and my nerves disappeared.

Jane was 86 at the time, but her memory was still sharp, and her eyes and smile exuded the same warmth that had charmed even the most hardened rock stars. Over the course of an afternoon, she told me the story of her life, from her Girl Scout days, to the day she retired from the Plain Dealer (at age 82), to the first time she fell head-over-heels in love — at age 80.

[blocktext align=”left”]Jane Scott was a triple threat – the first rock journalist for a daily newspaper, the first female rock journalist and, later, the oldest rock journalist on the beat. And, perhaps most unusually for a rock journalist, readers — and the rock stars she wrote about — almost universally adored her.[/blocktext] She offered unsolicited but welcome advice on my own love life: “Wait until you find someone who is a great conversationalist. That’s the most important thing.” I didn’t want to leave her apartment that day. I could have listened to her talk forever.

A few days after our interview, I was at a restaurant with friends when my phone rang. It was Jane, calling to say she had thought of a few things she wished she had told me during our interview. We talked a couple of times by phone after that, and when I sent her my completed thesis chapter on her life and career, she thanked me and told me how much she liked it.

Most rock journalists become jaded pretty fast these days. It’s a tough industry that keeps getting tougher. Jane was anything but jaded. In her 80s, she still lit up when she talked about her favorite bands, and, when she moved to an assisted living facility toward the end of her life, she was rumored to take copious notes whenever bands were brought in to entertain the residents. Throughout her career, she was impermeable to the snark that routinely enters most rock journalists’ vocabularies. She was thoughtful, kind, genuine, and passionate until the end.

Now, a decade later, whenever I struggle with a story I am writing, I ask myself, “What would Jane do?” And it helps. Every time.

After the forum wrapped up, the crowd moved to the House of Blues’ Cambridge Room, where they were treated to never-before-seen footage from the 1964 Public Hall Beatles concert, followed by performances by Michael Stanley, Beau Coup, and 1964, a Beatles tribute band.

Men and women who had been at the original concert wore Beatles t-shirts, held up homemade fan signs and cheered, channeling their teenage selves. Watching them sway back and forth and relive their musical memories, all I could think was, I bet Jane Scott would have loved this.

Get more information on the Jane Scott Rocks! documentary project and check out the film’s Kickstarter page. For her part, Elizabeth Weinstein will keep wearing her big red glasses even when they fall out of style.