Remembering WOXY and the Modern Rock 500

A Memorial Day tradition that chronicled the music of an era.


Every year from 1989-2009 (except 2004), radio station WOXY, in Oxford, Ohio, spent Memorial Day weekend counting down the Modern Rock 500—the best and most important songs in the format, as determined by WOXY staff. The Modern Rock 500 was named after the Indy 500 race happening that same weekend a few hours to the west, in Indianapolis, Indiana. Though Oxford is a college town and WOXY broadcasted Miami University sports, the station was a commercial modern rock station, not college radio.

The Modern Rock 500 was an evolving canon defined not by critics, but by listeners and fans. As longtime employee and former Music Director Matt Shiv explains, every year, staff “looked at how long songs were on the People’s Choice Countdown (weekly request Top 10) and the year-end Best Of countdowns” to determine which new tracks should be added to the MR 500. According to Shiv, “it was never trying to be anything other than representing the songs that built WOXY and were favorites of our listeners.” Listener demand, not expert taste, was in the driver’s seat.

As a teen, the Modern Rock 500 was the closest thing I had to a catechismic text.

As a teen, the Modern Rock 500 was the closest thing I had to a catechismic text. I grew up on the other side of Butler County from WOXY, on the outskirts of Cincinnati. Every year I recorded parts of the broadcast on cassette and listened to the top of the countdown late into Memorial Day night. Radio led me to music I would otherwise never be allowed to buy or hear live (if I could even get a ride to Looney T-Birds, Everybody’s Records, Bogart’s, or Sudsy Malone’s).

My dad didn’t like music, and I didn’t have older siblings, so the Modern Rock 500 was the curriculum I used to educate myself about cool music and its history. The Modern Rock format includes punk, post-punk, and the genres that grew out of them. Because punk and post-punk drew on everything from reggae and hip hop to disco and early EDM, modern rock radio could be equally omnivorous. I also used it to help express my growing cultural and political distance from those around me. WOXY (and later its message boards) helped me feel less out of place in a place defined by its synthesis of cultural conservativism and neoliberal (read: private-sector-driven) politics.

Fans of the now-shuttered station have preserved comprehensive records of each of the nineteen MR 500 countdowns. To commemorate the thirtieth anniversary of the first Modern Rock 500, I took a deep dive into the 1989, 1999, and 2009 countdowns. These records let us hear how WOXY and its listeners adapted to both music-specific events, like the rise of “alternative” and “indie” as genres, and the deeper social shifts that transformed the fates of modern rock and the Oxford-Cincinnati-Dayton region.

The 1989 Modern Rock 500 was the foundation for all subsequent countdowns. Its chart locates the format’s history in punk’s first wave—The Clash, the Sex Pistols, The Ramones, Elvis Costello, the Pretenders, and Talking Heads, who all appear repeatedly. The chart doesn’t include X-Ray Spex or The Slits, nor, with the exception of Laurie Anderson, the more avant-garde elements of the downtown scene. It gestures in hip hop’s general direction with Afrikaa Bambaataa (in Time Zone) and Blondie’s “Rapture.” Despite a relatively strict adherence to punk’s “No Elvis, Beatles, or Rolling Stones” orthodoxy, two kinds of antecedents punctuate the chart: rockers like David Bowie and the Velvet Underground/Lou Reed, and reggae’s Bob Marley and Peter Tosh. 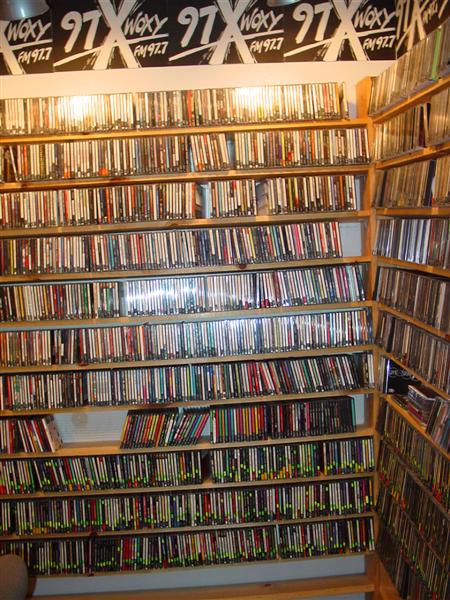 The first MR 500 was noticeably more diverse—in terms of both genre and artists—than one would imagine commercial rock radio to be in the Eighties. There are three women in the top ten: Siouxsie Sioux, Diana Iyall of Romeo Void, and Gillian Gilbert. There are twenty-five dance tracks, twelve reggae, five ska, and five hip hop tracks—though only one featuring a black person—as well as latin jazz and neo-swing tracks. The now-iconic black queer feminist anthem “Fast Car,” by Tracy Chapman, clocks in at 167. Eight local acts appear on the chart: three songs from The Bears, two from Adrian Belew, and three from Royal Crescent Mob. As a statement of listener values or preferences, the ‘89 MR 500 comes out as a progressive, diverse, local, and independent break from the status quo.

By 1999, the MR 500 has been revised in a few possibly contradictory directions. There are 312 songs that weren’t on the ‘89 list (twenty-nine of which were out by 1988, but did not appear on the ‘89 MR 500). The inclusion of artists like Gary Numan and The Buggles shows a re-evaluation of some synthpop and new wave songs whose mainstream success put them out of the running for the ‘89 list. But the fact that five of these twenty-nine newly-included old songs are by David Bowie demonstrates a recommitment to some of the rock that punk initially rejected.

What the ‘99 chart does best is represent local acts. If you count Bootsy Collins’s vocal on “Groove Is In The Heart,” there are fifteen songs by local, Cincinnati-area artists, from Over The Rhine to Guided By Voices. As WOXY DJ Matt Sledge put it: “We made it our own. And it certainly did reflect the area and not the industry as a whole.”

In my opinion, the 500th song on the 99 chart, Meryn Cadell’s “The Sweater,” is one of the most characteristically “97X” songs on any of the MR 500s. It’s a spoken word track that half-snarkily, half-affectionately tells the story of a teen girl’s journey from elation at wearing her boyfriend’s sweater to revulsion when he takes it back—learning, in the process, the sweater was always “one hundred percent…acrylic.” When I was a teenager, Cadell’s song felt like it was speaking to me, addressing my experience in a way that was both fun and not misogynist. Though “The Sweater” became something of a one-hit wonder across college radio, WOXY is the only place I’ve heard the song without specifically searching for it online.

“The Sweater” represents, to me, what made WOXY so different from everything else I encountered growing up in a sanitized conservative culture that loved to police everything, especially women and their sexuality. In 2001, for example, the operator of the only local art-house cinema decided to censor a scene with a visible vulva; Cincinnati alt weekly CitiBeat described this decision as a combination of post-Mapplethorpe-obscenity trial caution and Guiliani-style efforts to “clean up” (and gentrify) Times Square. As a scholar of popular music, I’ve always wondered whether the city’s obsession with policing obscene visual art allowed the weirder elements of the local music scene to fly under the radar—because their transgressions were harder to see.

While the ‘89 and ‘99 500s recount modern rock’s history from a very WOXY-specific standpoint, the 2009 chart tells a much more mainstream story. There are forty-two songs on the list that had been released by 1988, but do not appear on either the ‘89 nor the ‘99 lists. These additions— primarily figures like the New York Dolls, Television, and Tom Tom Club—bring the MR 500 more in line with the standard critical narrative of the format’s history. This was probably aided by all the magazines and compilations released in and around 2002 to celebrate the twenty-fifth anniversary of punk’s year zero, like Rhino’s “No Thanks! The ‘70s Punk Rebellion.”

All this commemoration helped solidify an orthodox history among fans and listeners of WOXY. It’s a history that more accurately represents the relationship between Seventies punk and hip hop, including artists, like Grandmaster Flash (291), whom Nelson George identifies as one of “Hip hop’s founding fathers.” The aughts’ spate of reunion tours, by bands such as The Pixies and Gang of Four, also likely influenced the revisions to the ‘09 chart. Despite appearing on neither the ‘89 or ‘99 charts, The Pixies’ “Where Is My Mind?” unseated the #1 track from those years: The Smiths’ “How Soon Is Now?” 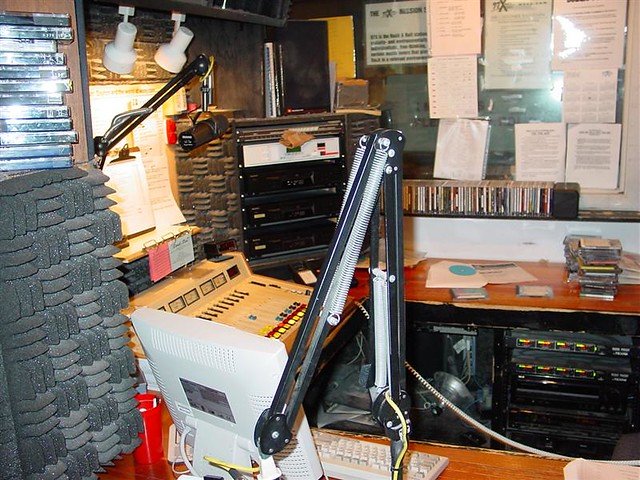 The ‘09 chart also represents touchstones of postmillenial indie rock—such as Jeff Buckley (44, 192) and Nick Cave and the Bad Seeds (384, 491)—who were absent from the ‘99 list. WOXY adopted the modern rock format in the Eighties, but by 2009, “indie rock” had solidified into a genre.

According to music critic Jes Skolnik, indie rock transforms modern rock’s punk-rooted practices” into “genre” norms, co-opting punk’s use of DIY as a critique of mass capitalism into an aesthetic for brands. They locate the shift from one to the other in 2003, one year before WOXY skips the MR 500, in its lurch from a commercial FM station to what we would now call a startup internet station.

Indie rock generally subscribes to the same values that defined modern rock: diversity, independence, and so on. But by the turn of the millennium these had stopped being revolutionary, anti-capitalist values. Instead, they were the very basis of the status quo. In its 2013 trend report/conceptual art piece “Youth Mode: A Report on Freedom,” the K-hole collective calls this mix (or co-optation) of post-punk values with post-millennial capitalism “mass indie.” Mass indie is having twenty different locally craft-brewed IPAs on the menu at a PRIDE fundraiser sponsored by Proctor & Gamble; the aesthetics traditionally associated with punk rebellion are now the heart of the status quo. Mass indie is, ultimately, conservative.

WOXY’s first liner, “Cincinnati’s Only Modern Rock Station Isn’t In Cincinnati,” used its geographic distance from the city to signal its cultural distance from the city’s conservatism. But the shifting political significance of “indie”—signposted by the Mapplethorpe obscenity trial in the early 1990s, and the 2001 protests following Timothy Thomas’s murder by a Cincinnati cop (which led to the “disaster capitalism”-style redevelopment and gentrification of the Over The Rhine neighborhood)—collapsed that distance.

Being a part of the WOXY community was a way to identify with Cincinnati by disidentifying with its predominant culture.

Once the aesthetics expressing modern rock’s progressive, anti-capitalist values were neither progressive nor anti-capitalist, they could be embraced by Cincinnati and other institutions writ large. This means those of us who liked those aesthetics because they took a stand against an unjust status quo have since had to either accept our assimilation or seek out new ways to express our dissent.

WOXY never had to make this choice. There was no 2010 MR 500 because the station closed in March of that year, when the startup that owned it shut down. Its loss is bittersweet: I miss WOXY and the online community around it, but I am glad it died before it could be co-opted.

Like that first liner says, being a part of the WOXY community was a way to identify with Cincinnati by disidentifying with its predominant culture—because your values were more futuristic, diverse, modern than theirs. I would rather see it gone than exploited.

But because we have those old charts, we can still listen to the MR 500 together and (re)form small communities of people imagining a different, better world. Something that fulfills the promise of those modern values instead of selling them out. I’ve made YouTube playlists of each of the 1989, 1999, and 2009 countdowns. Join me as I listen this Memorial Day weekend? By re-kindling the community WOXY fostered, we can keep its memory—and promise—alive. ■

Robin James is a professor of philosophy and music and co-editor of The Journal of Popular Music Studies. She’s author of books including Resilience & Melancholy and The Sonic Episteme. You can find more of her writing at her website, its-her-factory.com.