On the wrong side of the digital divide in Cleveland, OH

If it wasn’t for his telephone, David Rosario wouldn’t have a job.

Rosario, 29, works part time at Eliza Bryant Village, a nursing home not far from his house in Cleveland, Ohio, on E. 111th, between Superior and Wade Park avenues. He prepares meals for the institution’s residents.

“The biggest responsibility is preparing breakfast,” he says. “If I give them cold cereal, I’ll give them toast or Pop Tarts, with a boiled egg; or pancakes, sausage and scrambled eggs. You know, something wholesome.”

Roughly half of Cleveland households do not have broadband internet access. Advocates say this digital divide will gravely deepen economic inequality in the city.

“I looked through [listings] every night before I go to bed. I’d go in through the app, I’d click ‘apply.’ I already had a resume set up through the app.”

In fact, Rosario’s phone is his lifeline. When he wants to relax, he watches YouTube or posts on Instagram from his phone. Of course, there’s texting when he needs to contact friends and family. And he’s quick to explain why.

“[I do] everything through my phone because I don’t have Internet access at my house.”

Rosario says he simply can’t afford to place his home online. His monthly phone bill is about $60. He estimates Wifi would add another $60 to his budget. Still, he’s saving for it. His phone is no substitute for a computer and home-based broadband.

“Internet on a computer, the experience is more convenient. You don’t have to worry about your computer dying. You have more access to things, more opportunities,” Rosario says.

Rosario lives in one of the more than 53,000 Cleveland households that don’t have home-based internet access, according to Connect Your Community, a nonprofit that advocates for expanding broadband access to low-income and other disconnected communities. With a total of about 168,000 households in Cleveland, that’s nearly a third of households on the wrong side of the digital divide. When accounting for broadband access — which is necessary for many daily internet activities — the percentage of Cleveland households without sufficient internet access shoots up to almost 50. As being wired shifts from luxury to necessity, advocates say this digital divide will gravely deepen economic inequality in the city.

“If you have poor broadband connectivity, you leave the impoverished, impoverished,” says Dr. Nicol Turner-Lee, a fellow in the Brookings Institution Center for Technology Innovation, who is writing a book on digital inequality in Cleveland. “As we see broadband change how we live, learn and earn in society, and we see advances in areas in precision medicine and distance learning become the drivers for connectivity, this disconnect further disenfranchises people whose lives could be changed by technology.” 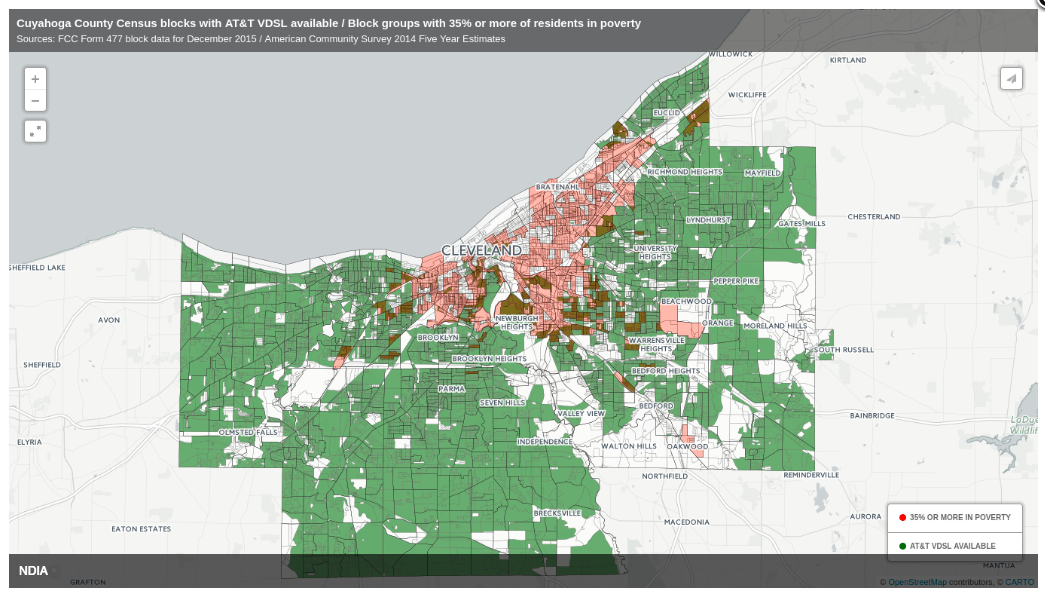 “Increasingly, you can’t apply for a job, or government benefits, or even undertake education without Internet access,” she says.

Sheon maintains connectivity is becoming a necessity as healthcare goes digital. She notes the federal government has invested heavily in healthcare technology, and that many providers are using electronic health systems.

“Where you live has more to do with how long you live and the quality of your life, than the healthcare that you get …  or anything like that. And your access to the Internet is also very much a function of where you live,” Sheon says.

Rosario’s neighborhood could be a case study. He lives in Cleveland’s Ward 9, which is predominately Black. His street is near University Circle, one of the city’s up and coming neighborhoods. But that trendiness hasn’t extended to his block, which is dotted with vacant lots and has poor access to broadband. According to census data, 36 percent of the ward’s residents live in poverty, and about 15 percent are elderly. The ward’s demographics are typical of underserved areas.

“The very technology that’s created all these efficiencies ends up marginalizing people when they don’t have access.”

“(Connectivity) makes it easier for people to get healthcare,” Sheon says. “You can get better healthcare if you’re digitally connected because you can use telehealth and access any expert in the world, if you’ve got a good Internet connection.”

But the definition of a “good Internet connection” is under debate.

In 2015, the Federal Communications Commission defined broadband as an Internet connection with a minimum 3 megabits per second, or mbps upload and a 25 mbps download. Those speeds are just enough to surf the net or browse social media. But they can’t handle webinars or video streaming. Nor are they sufficient when more than one person is online. That’s why Turner-Lee defines adequate bandwidth according to its efficiency for conducting essential tasks, not by speed. The importance of access goes beyond being able to stream video or download music, or play games, she notes. Like Sheon, she points to healthcare, which is increasingly moving online.

“You need a sufficient amount of broadband that matches up with what we want people to do. In today’s society, people need to be able to access medical care, so we require a level of bandwidth where you can remotely see your doctor with some level of precision,” she says.

“I could be a person suffering from diabetes, but I could live in one of those areas where it takes me two buses to get care. And I may never make it because my income doesn’t allow me money for the fare,” Turner-Lee says. For those folks, a community clinic could offer surgery and remote consultations, if it had a strong, reliable broadband connection.

“If you’re doing remote surgery, say in a community clinic, you want bandwidth that will ensure they can see where the needle or knife is going,” Turner-Lee says.

But that might be difficult in low-income neighborhoods like Rosario’s, where Internet service providers have not upgraded network connections. It lies in one of the areas where Connect Your Community claims AT&T neglected to upgrade its broadband technology. The organization found many low-income AT&T subscribers in Cleveland were therefore ineligible for “Lifeline,” a federal program that provides heavily discounted subscriber fees for broadband, because the Internet speeds available to residents were so low they didn’t meet the government’s definition of broadband.

After analyzing data from the FCC, Connect Your Community concluded, “AT&T has systematically discriminated against lower-income Cleveland neighborhoods in its deployment of home Internet and video technologies over the past decade.”

Connect Your Community accused the company of “digital redlining” — a reference to the days when the federal government drew red lines around low-income and ethnic neighborhoods and refused to invest in them. The telecommunications company has denied the charge, but has not disputed the organization’s findings.

Whether intentional or not, the effect is the same. People who live in low-income areas are shunted aside. The result is a new kind of segregation that is just as damaging as the days when “white only” and “colored only” signs prescribed where folks could and could not go.

“The very technology that’s created all these efficiencies ends up marginalizing people when they don’t have access,” says Turner-Lee.

When folks rely on phones, data costs can pile up quickly, Turner-Lee says. People with home broadband can avoid hefty bills by switching their phones to wifi. But low-income people who only have phones risk being offline in a world that’s moved online.

Rosario knows this firsthand. He burned through 60 gigs of data between March and April 2018, and has spent time seeking out free wifi at fast food restaurants when he’s been unable to pay his bill. Turner-Lee says many consumers use more broadband than they realize, but the cost doesn’t hit them because they can shift to wifi at home or work.

Rosario doesn’t have that option, so he now buys unlimited data.

“I am not wise when it comes to specific amount of data,” Rosario says. “I need unlimited data because I stay on Youtube. I stay on Facebook and Instagram and that eats your data up. So if you don’t have unlimited data, you are limited in your access unless you do have wifi.”

Of course, Rosario would rather have home wifi to overcome the limitations of his phone.

Turner-Lee says typical responses to digital inequality usually involve teaching people to use computers and then giving them refurbished equipment once they learn.

Rosario took advantage of one such program. After he graduated he got free wifi for a year. But he says he could not maintain the service after the year ended.

Agencies and organizations are implementing workarounds. For example, Cuyahoga Metropolitan Housing Authority partnered with Digital C for “Connect The Unconnected,” an innovative program to send high-speed broadband to residents of selected CMHA properties. But that program only reaches 140 residents. That’s great for those 140 residents, but the thing about being on the wrong side of that digital divide is that when access is expanded for others, you only get further left behind.

According to Turner-Lee, this is especially the case for Cleveland, a city with a growing reputation for digital innovation and economic development, but only in select areas.

“In Cleveland, where you are seeing such bifurcation in terms of where there’s access, that’s a problem,” says Turner-Lee. “We have to figure out how to create inclusive plans.”

Update: The original version of this article did not rely on the most recent data regarding internet access in Cleveland, stating that 50.7 percent of households had no broadband access, and 36.1 percent of households had no internet access at all. The most recent data shows those percentages to be 46.82 and 31.88, respectively. The data in the article has been updated.

Banner photo: David Rosario in his home in Cleveland, Ohio, which sits in one of the city’s many “digital deserts.” Photo by Afi Scruggs.