From the Daleys to Rahm Emanuel: Whatever happened to Chicago pols with authentic Chicago accents?

Have you listened to a Chicago politician lately?

On the night of the March 20 primary, I heard Illinois Gov. Bruce Rauner tell his supporters, “I am honored and humbled by this victory; you have given me the chance to win the battle against the corruption that plagues Illinois.” And I thought: He sounds like Mayor Adam West from Family Guy — the one character from that show who doesn’t have a regional accent.

And then there’s Chicago Mayor Rahm Emanuel, who was raised in the affluent suburb of Wilmette and then attended Sarah Lawrence College in New York. Emanuel speaks in the flat, deregionalized tones of a D.C. policy wonk, which he was for most of the 1990s and 2000s. Unlike previous mayors, who called the city “Sh-caw-go,” Emanuel also uses the new-school pronunciation “Shi-cah-go” for the city he governs (as does Barack Obama, who began his 2008 Election Night acceptance speech, “Hello, Chi-CA-go!”).

All across the Rust Belt, politicians used to provide wonderful examples of regional accents, because so often, they emerged from the social class most likely to speak with those accents.

Whatever happened, I wonder, to politicians with authentic Chicago voices, such as Mayor Richard J. Daley? During the 1968 Democratic National Convention, the Old Man gave a press conference in which he declared, “In the heat of emotion and riot, some p’licemen may have overacted,” and “this administration, our administration, and the people of Sh-caw-go, have never and will condone brutality.” Or even Daley’s son, Mayor Richard M., who once told reporters scrutinizing him to “go scrooten yourselves.”

All across the Rust Belt, politicians used to provide wonderful examples of regional accents, because so often, they emerged from the social class most likely to speak with those accents: working-class whites who never moved away from the communities in which they grew up. As the saying goes, “all politics is local,” and even the most prominent politicians began by cultivating hometown followings in which a strong local accent was a sign that they were “one of the people.”

Dennis Kucinich, who displays the full-on Northern Cities Vowel Shift when he speaks of bringing “jaahhbs” to the “middle clay-ess” is a truck driver’s son who was elected Cleveland city councilman and mayor of Cleveland before going on to the U.S. House of Representatives, where he never lost the accent that served him so well in Ohio. Sophie Masloff, Pittsburgh’s mayor from 1988 to 1994, emerged from an early-20th-century, working-class Jewish milieu, and was beloved for both her Yinzer accent — the language spoken at Stillers games and taverns serving “Arn City” beer — and her malapropisms. (She once called Bruce Springsteen “Bruce Bedspring.”) In an appreciation published on the 100th anniversary of her birth, the Pittsburgh Post-Gazette hailed Masloff as “Yinzer, Grandma, Mayor,” in order of importance to her image.

Even the most prominent politicians began by cultivating hometown followings in which a strong local accent was a sign that they were “one of the people.”

But as the white working-class has declined in both population and prominence — a casualty of deindustrialization and education — regional accents are becoming less pronounced, and less widespread. The classic “Sh-caw-go” accent, wielded so effectively by the Daleys, is now only heard in a few white ethnic wards in the far Northwestern and Southwestern corners of the city. With the recent retirement of Polish-American alderman Michael Zalewski, only three members of the Chicago City Council speak with accents that would sound at home on SNL’s legendary send-up of Chicago patois, “Bill Swerski’s Superfans.” One of them is Daley’s grandson, Patrick Daley Thompson. Another is Nick Sposato, a former firefighter who greets audiences by saying, “I’d like to thank youse all for coming.”

In 1980, whites without college degrees made up 65 percent of the electorate; by 2012, that figure was down to 36 percent. As that class’s political influence has diminished, politicians have less motivation to identify with, and sound like, those voters, and more motivation to sound like the professionals who now dominate the economies in such cities as Chicago, Pittsburgh, and Cleveland, which have transformed themselves from industrial hearths to centers of finance, tech, and health, respectively.

Today’s politicians are also less likely to have emerged from working-class backgrounds. The politicians coming to power in today’s Midwest are well-traveled, well-educated late Baby Boomers and Gen Xers, such as Emanuel and Pittsburgh Mayor Bill Peduto, who both got their starts in national politics, rather than rising through the ranks of a local political machine. If Peduto ever had a Yinzer accent, he lost it as a student at Penn State or a D.C. congressional intern.

The politicians coming to power in today’s Midwest are well-traveled, well-educated late Baby Boomers and Gen Xers who got their starts in national politics, rather than rising through the ranks of a local political machine.

Of course, Midwestern politicians with regional accents still exist, but if they have national ambitions their accents tend to get watered down. When Wisconsin Gov. Scott Walker was running for president in 2016, The New York Times busted on him for soft-pedaling his Inland North accent to appeal to non-Midwestern audiences. As they put it, “Walker Washes ‘Wiscahnsin’ Out of His Mouth.’” The video the Times provided as evidence showed Walker on local TV, pronouncing “Wisconsin,” “honor,” and “option” with the elongated “fronted o” that is a signature of Inland North speech. Then it showed him on the campaign trail, pronouncing “Wisconsin” and “economy” with much flatter “o”s. 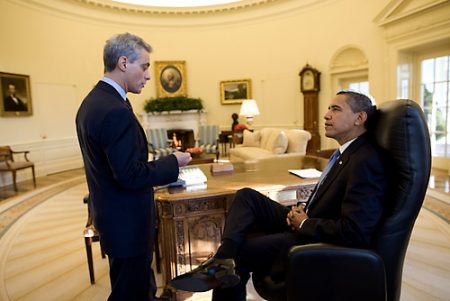 Rahm Emanuel worked in the Clinton and Obama administrations and served in the U.S. Congress before getting elected Mayor of Chicago. Photo by Pete Souza.

Afterwards, Wisconsin Public Radio asked world-famous linguist William Labov, one of the discoverers of the Northern Cities Vowel Shift, to comment on Walker’s changing accent. Labov called it “part of his shift of personality to deal with different people in different parts of the country,” and noted that George W. Bush often did the same with his Texas accent. Both politicians were acting on the attitude that any strong regional accent — Wisconsinite, Southern, Bostonian — is provincial and unsophisticated, and therefore ought to be abandoned by anyone who wants to get ahead in the professional world.

But plenty of politicians have made it all the way to the White House without discarding their accents — and, in fact, have made those accents essential pieces of their personas. John F. Kennedy’s Boston accent was lovingly parodied by comedian Vaughn Meader on his million-selling First Family album. Jimmy Carter joked to Southern audiences, “Won’t it be nice to have a president without an accent?” In our own era, Bernie Sanders’s accent — a relic of mid-century Brooklyn — has not prevented him from amassing a national following.

The only politician who used a Midwestern accent to the same effect on the national stage was not actually from the Midwest. When Sarah Palin delivered her vice presidential acceptance speech in St. Paul a decade ago, journalists commented on her “Fargo accent,” as the North Central accent became known after it was immortalized in the 1996 Coen Brothers movie. This was not far off base. Alaska’s Matanuska-Susitna Valley, where Palin grew up, was settled during the Depression by farm families from Minnesota, Wisconsin, and Michigan, transplanted there by the Federal Emergency Relief Administration. Palin’s accent became the basis for an impersonation by Saturday Night Live’s Tina Fey, which helped the politician become a cultural figure who transcended politics.

So there may still be a place for strong Midwestern accents in politics. During the 2016 election, there was a narrative that white working-class voters in the Rust Belt were attracted to Donald Trump’s outsider candidacy because conventional politicians no longer spoke to them. They may have felt that way, in part, because politicians no longer speak like them. Hillary Clinton lost most of her Midwestern accent during her long career climb from Park Ridge, Illinois, to Wellesley to Arkansas to D.C. to New York. And so she lost the Midwest to a guy with a Queens accent. It may not have sounded familiar to Midwesterners, but at least it sounded authentic.

Ed McClelland is the author of the Belt Publishing book, How to Speak Midwestern.