We reached Peak Detroit this week. It doesn’t get any more Detroit than this: an actual live tiger roaming around the Packard Plant. The ultimate symbol of Detroit sports intersecting with the ultimate symbol of Detroit’s rise of the automotive industry and the near-fall of said industry that nearly killed the city. Mix in two DIY-ers hoping to capture the beast with garden tools, in the true spirit of Detroiters doing the most with the least, and this is more Pure Detroit than that store in the Fisher Building. 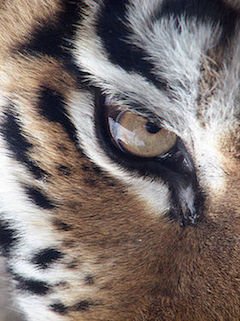 This tiger in the Packard Plant is more Detroit than a pair of stolen Cartiers. More Detroit than a newborn child named Dequindre taking a nap at Sleepy Hollow Day Care. If Carmen Harlan and the ghost of Coleman Young were wearing open-toed gator sandals and doing a ballroom hustle to “My Eyes Don’t Cry” aboard the original Diamond Jack passing underneath the MacArthur Bridge at exactly 3:13 p.m., it still wouldn’t be as Detroit as the big cat in the auto plant. “Where are the black tigers?” Nolan Finley is probably asking, somewhere. This tiger is so Detroit, he probably couldn’t afford a $2,500-per-month cottage in Corktown so he thought the Packard Plant was where the next hipster pilgrimage would be. This tiger remembers WDRQ in the ‘90s, it’s so Detroit.

Mark this moment in history, folks, because it’s only going uphill from here. You see, now that we’ve reached Peak Detroit, mankind’s natural instinct is to find a higher summit. The gates are open. The expectations are high. The ambitions are endless.

It wasn’t enough that people ski in abandoned churches, serve wild raccoons as cuisine or make emergency alert systems out of pop cans. No, this is Detroit, and we have to keep challenging ourselves to keep doing more and more extreme activities to keep telling the world just what a crazy and ridiculous town this is. Anything is possible in Detroit! You can do whatever you put your minds to, even at the expense of average, uninspiring citizens just trying to live a regular life.

Now that we’ve reached Peak Detroit, mankind’s natural instinct is to find a higher summit. The gates are open. The expectations are high. The ambitions are endless.

The eyes of the world are always on Detroit – as usual – but now they’re transfixed permanently, thanks to this botched (or not?) photo shoot that also included bobcats and wolves. Looking at Detroit is not unlike looking at Medusa; one glance, and we’ve got you for good. A hearty thanks to David Yarrow, the photographer who helped us pull this off.

So now what will be the next extreme Detroit stunt, the one that shows that you can keep pretending this city is a giant pile of Lincoln logs, ready for you to build whatever your imagination can conceive? Maybe someone can make a transparent replica of United Sound Systems out of glass Vernors and Faygo bottles recovered from abandoned homes in Poletown, held together from recycled vegetable oil from the Better Made plant. Or maybe some French artists will have an erotic performance art display on top of the Guardian Building in which heroin addicts from the Cass Corridor constantly pleasure themselves on a livestream. (Funded by the Kresge Foundation.) Who knows? Come to Detroit and live your wildest dreams.

Aaron Foley writes the On Detroit column for Belt as well as authoring How To Live In Detroit Without Being A Jackass, to be published by Belt in fall 2015. Pre-order a copy here.