Figments of a Pittsburgh Imagination

Valeria Lukyanova, an instructor at the School of Out-of-Body Travel, says she’s from another planet and speaks to her fellow aliens through the light she eats. Valeria Lukyanova is a racist and a lunatic, but—should her diet work—I would maybe try it.

But I am mostly sane, and, cancer aside, I have not considered Breatharianism.

The air here in my hometown, Pittsburgh, is sketchy at best. I get updates on Pittsburgh’s air quality on an app on my phone. Bad-air-day emojis are smiley faces covered with surgical masks, or smiley faces coughing smog.

A while back, a Google employee, a transplant from San Francisco to Pittsburgh, wrote an op-ed wailing about how rotten Pittsburgh air is. He couldn’t sleep. He couldn’t go outside. Even his dog was wheezing. He couldn’t imagine how anyone lived here. Pittsburgh might as well be Mars, unfit for human life.

More: Except for the Cancer I’m Fine

“That’s it. I’m done,” Google Man wrote. He said he was moving to Portland.

I and nearly every native Pittsburgher I know mocked this guy. We said good riddance, bye-bye now, don’t let the door hit you in the ass, etc.

Native Pittsburghers have a general disdain for entitled rich people who move here from places like Brooklyn or San Francisco. They’ve driven housing prices up. They’ve brought in artisanal toast and duck speck. These strangers mock Pittsburgh accents. They turn the sites of mills into luxury condos and call them historic, quaint.

“Pussy,” I and people I know said about the Google guy.

A personal history of Pittsburgh air quality: As a kid, when I’d blow my nose, the Kleenex would turn black.

Andy Warhol made Brillo Pads famous in his paintings. Andy Warhol said everyone would be famous for fifteen minutes.

Sometimes I Google my father’s name, hoping I will find him. My father was never famous, though he should have been. My father was a singer with a voice like Sinatra’s. My father cut a record once in a radio station in Braddock. He’d won a contest. For a minute he was the golden voice of Braddock, Pennsylvania. The pride of Cherry Way.

My father’s name appears in the 1940 U.S. Census, the Death Index, and World War II Draft Cards. His obituary comes up, too.

There is no mention of my father’s singing voice, not even in the obituary. I should have written my father’s obituary, but my father died more than twenty years ago and, back then, the funeral director handled that. Everything standard, everything on a form, death as ordinary as applying for a library card.

How did you calculate those fifteen minutes, Andy Warhol?

I was nineteen years old, working at The Erie Daily Times in Erie, Pennsylvania, terrorized by an editor named Phyllis. Phyllis wore beige suits with shoulder pads that could double as toasters, and thick round-framed glasses that made her eyes bulge like her thyroid was about to explode. Phyllis circled the newsroom like a shark and reminded everyone she used to work at Newsday in New York City. “A real newspaper, in a real city,” Phyllis would say. 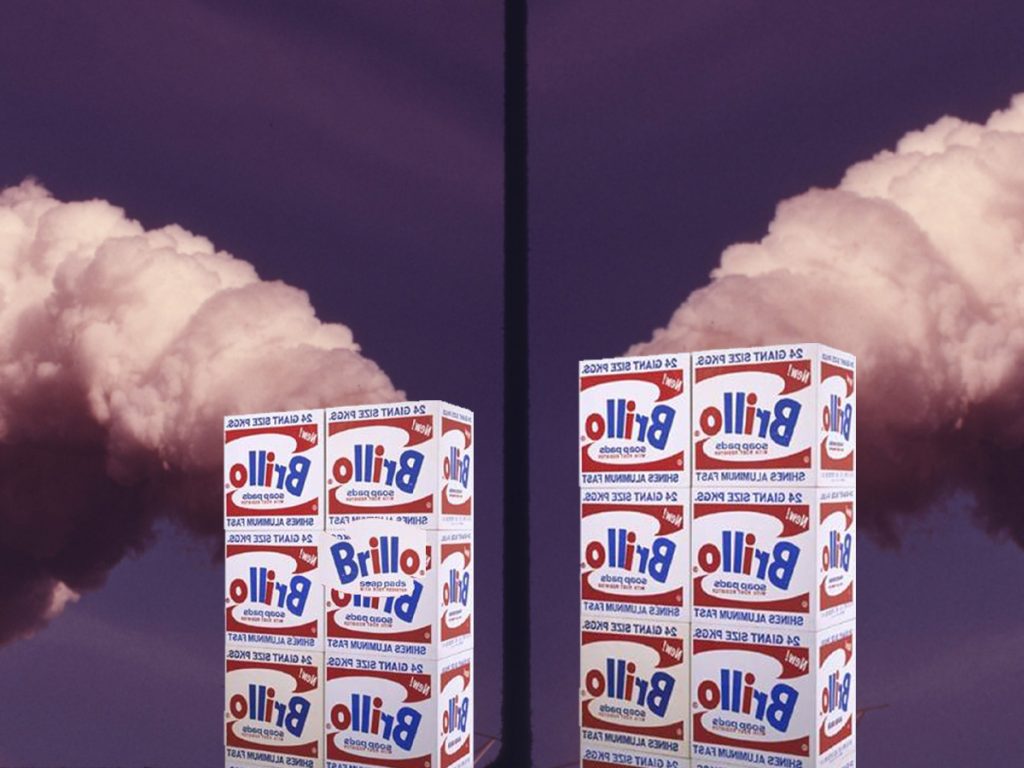 How Phyllis ended up in Erie, Pennsylvania—a place where snowfall is measured in feet and not inches, a place where, during high tide, dead fish wash up on roadways and are left there to molder in whatever sun dares show up—was never clear, and no one dared ask.

When Phyllis was angry, and Phyllis was always angry, her eyes turned blowfish. Her New York accent was a switchblade and she’d wield a lit cigarette as if, at any moment, she’d planned to put it out on someone’s face.

Her favorite word was crap. As in, “Don’t give me that crap,” and “What is this crap?” and “Stop crapping around, you crap-asses,” and “Deadline, crap-tards.”

I’d spend nights lying awake, staring at the water stain on my college-apartment ceiling, considering the stain an ink-blot, imagining Phyllis’s owl face hovering over me as I worried over the spellings of the names of the dead.

This was many years ago, of course. Phyllis is, I’m sure, among the dead now. I hope whoever filled out her obituary form got it right. I hope it said she used to work at Newsday. I wish there were a place in her obituary for the word crap because Phyllis would have liked that. “We’re in the truth business,” Phyllis liked to say. Truth = anti-crap.

I learned a lot from Phyllis, terror aside.

Mark this: Andy Warhola, who changed his name to Warhol when he was Andy from New York, was born in Pittsburgh, Pennsylvania. He’s buried here, too, next to his parents Julia and Andrej Warhola, at St. John the Baptist Byzantine Catholic Cemetery in Pittsburgh, Pennsylvania. “I never understood why when you died, you didn’t just vanish, and everything could just keep going on the way it was only you just wouldn’t be there,” Andy said. “I always thought I’d like my own tombstone to be blank. No epitaph and no name. Well, actually, I’d like it to say ‘figment.’

Andy Warhol’s grave site is viewable twenty-four hours a day, seven days a week through a collaborative project between The Warhol Museum and EarthCam. The project is called Figment. A webcam records everything that’s happened at Andy’s gravesite since his death and so on. His tombstone says Andy Warhol. His birth date: August 6, 1928. His death: February 22, 1987.

I once set a can of soup on his grave.

Those Brillo Pads Andy made famous are steel wool. People leave those at his grave, too.

Pittsburgh’s steelworkers like my father used steel wool to scrub steel from their bodies. Circle of life.

The Brillo Pad website claims the word brillo is Latin for “bright,” though there is no such Latin word. It’s all marketing.

I’d pluck metal shards from my father’s face and palms with tweezers. I loved to do this, the way I still love to pop pimples and beg my teenage kids to give me their faces and backs to work on. Sometimes it was hard to tell which shards in my father’s skin came from Brillo Pads and which from the mill. My father would joke about how he could set off metal detectors at the airport if he could ever get a vacation.

“If I could just get away,” my father would say when he was well, then when he was sick, as if a change of scenery would cure him of cancer.

Isn’t that what we’re talking about?  How we’d all like to find a place, a respite, somewhere we could rest a while and live. Just live. And breathe. That.

On their last trip together, my father and mother were in a car, heading for Las Vegas, my father’s favorite place—the magic of water in the desert, lucky at last. On the way to the airport, my mother said my father was driving erratically, weaving lanes, no turn signal.

Even on a good day, my father didn’t believe in turn signals. “The bastards think I’m going to waste a bulb on them?” he’d say about other drivers.

War does things to people. So does working in a mill. My father was not Kurt Vonnegut. For my father, World War II broke his belief in humanity.

“Be kind, babies,” Kurt Vonnegut, who survived the bombing of Dresden, advised other humans, his advice for going on living. “Fuck them all,” my father said about the people on the road who needed to know when or if he was going to turn.

“I thought he was going to kill us,” my mother said later, but I’m sure in the car she said nothing. I’m sure my mother pressed her foot to the floor mat on her side, where the brake would be if she were driving. The mat there was worn down, a hole through the carpet.

Throughout their fifty years of marriage, my father always drove. My mother was always the passenger. My mother wasn’t weak. She knew it mattered to my father that he was the one driving and she let him drive, even if her life depended on it.

Love is like that, maybe. Maybe we all give over parts of ourselves and the parts we give over make us more beautiful. Or maybe I’m just prettifying things.

And so it goes. Dear Vonnegut.

Halfway to the airport, my father realized he forgot his wallet. They had to turn back. My father motherfucked everyone, including my mother, the president, his doctors, PennDOT, all the way home.

My parents missed their flight. A blessing, my mother called it later. “God was with us,” my mother said, prettifying, though she rarely went to church and when she did, she didn’t listen to a word the priest said because she said the priest was full of crap.

Bless you, Phyllis, full of grace. May your favorite word live on and on.

“Well, you’ve lived your life,” the doctor said when he told my father the cancer had moved to his brain. The insult of that.

“In order to write about life, you first must live it,” Hemingway said.

“What will you do with your one wild and precious life?” Mary Oliver wrote.

“You’ve lived your life,” the doctor said to my father.

Imagine someone saying that to you.

Imagine someone saying that to anyone you love. ■

Lori Jakiela is the author of four books, including the memoir Belief Is Its Own Kind of Truth, Maybe (2016), which received the 2016 Saroyan Prize, was a finalist for the Council of Literary Magazines and Small Presses Firecracker Award and the Housatonic Book Award, and was named one of twenty Not-to-Miss Nonfiction Books of 2015 by The Huffington Post. She directs the undergraduate writing program at the University of Pittsburgh at Greensburg, where she is a professor of English and Creative/Professional Writing. Her author website is here.