White Shirt Day and “The Birth of a Union”

Here’s a tip for travelers to Flint: ask Avis for a domestic car. As I steered my rented Ford Taurus into the parking lot of UAW Local 659, I was confronted with this sign: “THE PARKING OF ANY FOREIGN MADE AUTOS ON LOCAL 659 PROPERTY IS ABSOLUTELY PROHIBITED. VIOLATORS WILL HAVE THEIR AUTOS TOWED AT THEIR OWN EXPENSE.”

I was at the local for White Shirt Day, the annual commemoration of the Flint Sit-Down Strike, which ended on February 11, 1937, when General Motors agreed to recognize the United Auto Workers. The Sit-Down Strike was one of the most significant labor disputes of the twentieth century: the strikers believed it was the act that created America’s great mid-century middle class, since the UAW’s contracts set wages for all industrial workers. Yet the strike is little remembered, and little celebrated, outside Flint.

Outside the union hall, the American flag flew at half staff, to commemorate the recent death of U.S. Representative John Dingell, a friend to the labor movement throughout his fifty-nine years in Congress. Inside, in an auditorium with cinder block walls, a drop ceiling, and a bingo board partially covered by blinds, hundreds of autoworkers sat at long tables. They all wore white shirts: t-shirts, polo shirts, button-down Oxfords. One person wore a white sweatshirt with an iron-on photo of eleven-year-old Joshua Trump sleeping through the State of the Union address.

White Shirt Day was started in 1948 by Sit-Down Striker Bert Christensen, as a way to remind the younger workers just what the veterans had gone through to win them health care, job security, paid vacations, and pensions. During the strike, GM cut off the heat in the plants. The police fired tear gas, then bullets at the strikers. For forty-four nights, the men slept on auto seats while their wives passed food through the windows in baskets hoisted on ropes. A memorial outside the offices of UAW Region 1-D includes statues of strikers sitting on auto seats, as they did during the occupation of the plants, and of a police officer hauling away a member of the Women’s Emergency Brigade for breaking windows at Fisher Body #2, so tear gas could escape.

“My father was on the Education Committee,” said Christensen’s son, Pete, who worked more than forty years for GM himself. “He felt we should be doing something to recognize those in the plant that had put up the resistance. He wanted to make sure those people were never forgotten. Back then, foremen and supervisors were the only ones allowed to wear white shirts. Well, he figured, they can’t fire us all, so we’ll all wear white shirts. There were two rules: don’t get your shirt dirtier than your supervisor, and do your job to the best of your ability. It was pretty big when I hired in in sixty-five. Everybody had a white shirt. I don’t care if you were in paint, in the body shop.”

When Christensen was a UAW official, representing truck plants around the country, he tried to get the union to sponsor White Shirt Day as an international event. Despite his efforts, the commemoration never caught on outside Flint, where it rotates annually among local union halls. “That was part of the problem,” Christensen said. “It became mainly a Flint thing. It’s not a settlement of a Flint strike; it’s the birth of a union.”

The auditorium’s stage was populated with union presidents and politicians, including Michigan Sen. Gary Peters and Flint’s congressman, Dan Kildee. Floating in front of them were a pair of balloons, one in the shape of an 8, the other in the shape of a 2. It’s been eighty-two years since the Sit-Down Strike ended. This was the third White Shirt Day attended by no living Strikers or Women’s Emergency Brigade members. They may be gone, but their story is still being told by the generations of Flintstones who’ve succeeded them. In fact, it’s being told in the voice and the style of those younger generations. A video screen displayed a performance by Mama Sol, a Flint rapper who narrated the events of the Sit-Down Strike to a hip-hop beat:

“The date was December 30, 1936, in Flint, Michigan, that unified. At Buick Fisher body plants number one, two, four and number nine. For weeks, they would live without power and heat and ignore the court orders when they were told to leave. See, they were seekers of change and people of peace, at least until January 11, 1937, when police attempted to prevent food from being delivered by their family members, so in response, they sprayed water hoses from the windows and threw car parts at cops. The cops returned tear gas and buckshot and the fight came to a stop with the strikers controlling the gates. Then the National Guards were sent in by Governor Frank Murphy, who was worried about the strikers and wanted to prevent any further violence. The fight lasted a total of six hours, and outside the wives and mothers refused to cower. Demanding relief for their husbands and sons, this was known as the Battle of Bulls Run. These women were brave, and were not afraid of guns. They came to the strikers’ aid all forty-four days, led by Genora Johnson, forming the Women’s Emergency Brigade. See these small victories spread quickly and hope was felt, when President Roosevelt applied pressure to bring the strike to a conclusion, and force GM to bargain with the union. On February 11, 1937, both sides compromised, and all strikers were rehired.” 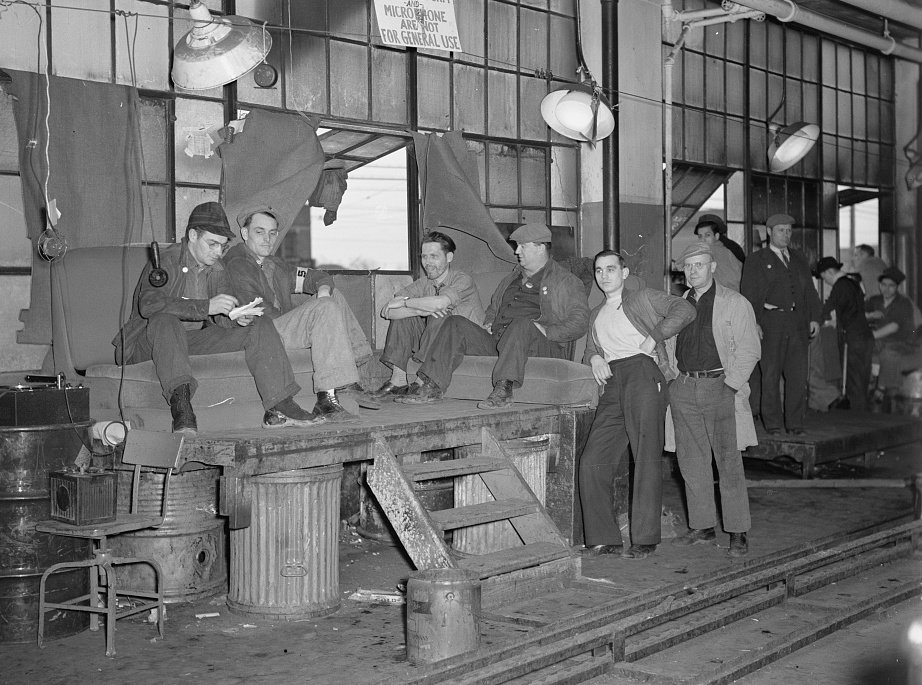 When White Shirt Day began, just after World War II, the victories of the Sit-Down Strikers appeared permanent. American auto workers were the highest-paid laborers in the world. More than ninety percent of cars sold in the United States were built by UAW members working for Ford, Chrysler or General Motors. The UAW reached the peak of its influence in the late 1970s, when it had more than one million members. The union’s membership is now half that size, and it dwindles every time another plant closes. Last November, GM announced the end of the assembly line for four more plants—including two in Michigan—which together employ fifteen percent of its salaried workers. As UAW vice president Cynthia Estrada noted in her keynote address, the UAW no longer represents a majority of workers who build vehicles in the United States. No wonder they’re threatening to tow away Nissans and Hondas.

In the back of the auditorium stood women dressed in the red berets and red armbands of the Women’s Emergency Brigade. After the music and the speeches were over, they served bean soup, apples and buttered bread, the food the strikers ate inside the plants. “Because of the turmoil they went through, they scrounged up the very essentials,” said Sherry Snyder, as she ladled soup into Styrofoam bowls. “Because of all their sacrifices, you and I get to reap the benefits: insurance, a decent wage, time with your family.”

In some ways, the Sit-Down Strike has never ended in Flint, because the class conflict at the root of the strike has never ended there. GM used to be known as “Generous Motors” because of its high wages and bountiful benefits, but as one White Shirt Day speaker pointed out, “they didn’t give it to us; we had to take it.” The children and grandchildren of Sit-Downers held up placards that read “GM: We invested in you. Now invest in us.” Then they joined hands and sang “Solidarity Forever.”

“It’s important to remember this, because without remembering the past, you can’t have your future,” said Ryan Buchalski, president of UAW Local 598, which represents workers at the Flint Assembly plant. “You can’t drop the microphone. When you look at what we just did, closing four plants—we fought for safety, but the one thing we never fought to end was corporate greed. We may not be breathing smoke anymore, but they still are the same kind of people they were in 1937.” ■

Edward McClelland is writing a book about the Flint Sit-Down Strike.

This story was made possible by Belt members. To support more independent writing and journalism made by and for the Rust Belt and greater Midwest, make a tax-deductible donation to Belt Magazine, or become a member starting at $5 per month.