The Sun of Knowledge is Beaming Down: Cincinnati’s Mercantile Library

In the first half of the nineteenth century, before the Internet, before telephones, before high-speed communication or mechanized transportation, there were already whispers about the potential power of mobile information. Knowledge, and the connections to share it, were useful, especially in tandem. And the best place to get information and stay connected was a library, stocked with the latest editions of books and periodicals.

Cincinnati was emerging as a major commercial center in 1835, strategically situated on the river that served as the main freight artery to the West. The city’s young merchants felt they could use certain practical, cultural, and intellectual resources, as well as a place to meet. They knew about mechanics’ institutes, mercantile libraries, athenaeums and society libraries back east, kinds of organizations that embodied the spirit of self-improvement of the day and provided the means for cultural and educational betterment among certain professions and classes.

A junior partner at a local grocery firm with the auspicious name of Moses Ranney led a meeting of 45 young men on the second floor of a firehouse. They resolved to pool their funds, subscribe to newspapers and periodicals, establish a book collection, and rent quarters. An early president’s report to what they dubbed the Young Men’s Mercantile Library Association captures their idealistic mood:

We are young men. We are banded together for self-improvement. Very limited, for the most part, have been our educational advantages, yet we believe in an enlightened age—in a land of liberty—the sun of knowledge, in its meridian splendor, is beaming down upon us. The World, itself, is waking up, and shaking off the lethargy of ages. Shall we be sluggards? Nay, but let us grasp at every means of self-improvement within our reach; let us read, think, act, in the living present …

Sluggards they weren’t. Many found success in business. For the first decade or so, the Mercantile Library was all about newspapers and periodicals; members of the fledgling institution queued up to glean news from freshly pressed papers. The Mercantile Library also created and housed the Mercantile Exchange, which collected steamboat schedules and other business intelligence, and the Chamber of Commerce, which ultimately brought the telegraph to rooms directly opposite the library. Having birthed two organizations to promote commerce, the Mercantile Library was freed to pursue less mercenary missions. The library began to seriously collect books and host lectures.

But the early members remained shrewd negotiators with keen business acumen. When the library, which shared a building with the Cincinnati College, burned in 1845, the members found themselves of sufficient means to pony up $10,000 to rebuild. And with that contribution they negotiated a perpetual lease, drafted by the wily Alphonso Taft, father of a future portly U.S. president. The lease grants the library quarters for 10,000 years, renewable.

[blocktext align=”right”]A lease granted the Mercantile Library quarters for 10,000 years, renewable.[/blocktext]In 1903, when the neighborhood experienced a vertical construction boom, a twelve story building was erected on the site. The new facility included custom quarters for the library on the eleventh floor, a dedicated elevator, and a splendid view of the Ohio River wending its way past the Queen City. When construction fell behind schedule, the library’s board sued the developer for $9,500—according the contract he owed them $10 for each day his project was delayed 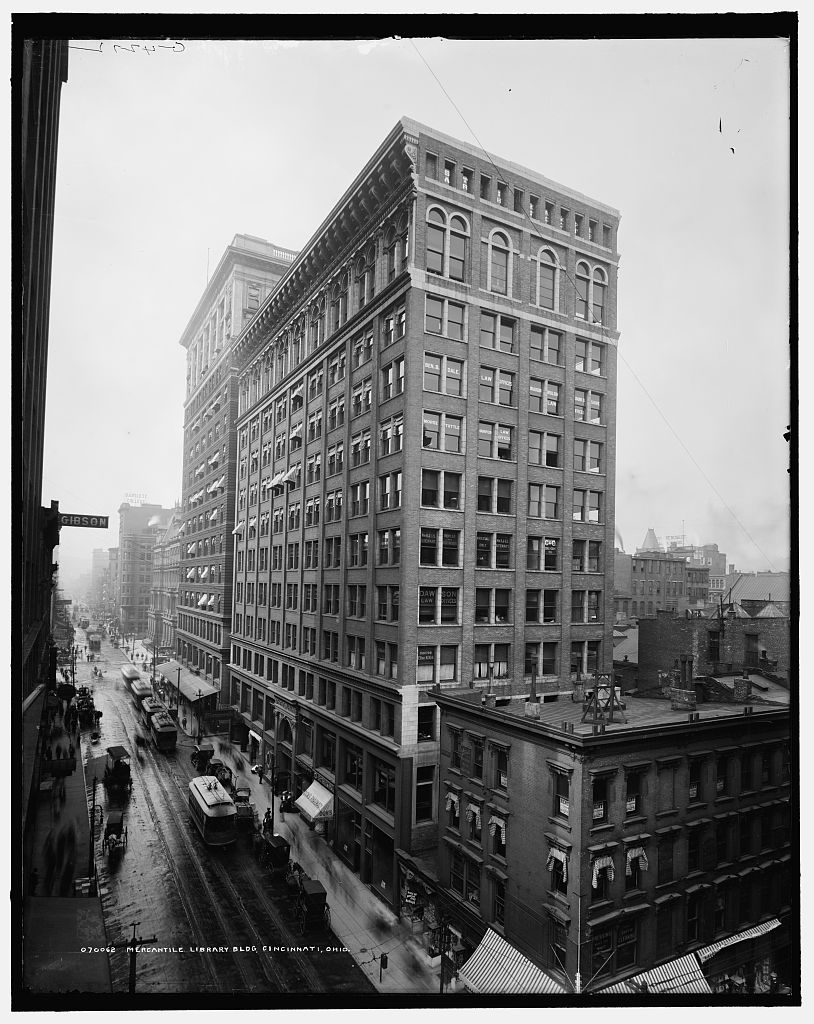 The current home of the Mercantile Library, as seen sometime between 1902 and 1910. The library is on the 11th floor, behind the arched windows. Photo via Library of Congress.

When visitors emerge from the express elevator to the Mercantile Library, they find themselves face-to-face with a statue named “Silence”, a robed, six-foot woman of marble, index finger poised before her lips. She guards a vast reading room lit by tall, arched windows which look out on the ornate masonry of neighboring high rises. Old-world iron and mahogany book and magazine stands line the glossy oak floor, and Arts and Crafts elements enliven the decor. Portrait busts sternly regard visitors as they browse new acquisitions or read over lunches. Steel stacks, some with glass floors, house most of the library’s 80,000 or so volumes, many centuries old, coal-rimed and redolent of the tobacco that readers, until relatively recently in the geological scheme of things, smoked over their pages. While the Mercantile remains committed to the printed word, it has found its truest calling bringing the spoken word before eager audiences—the library has hosted lectures by Herman Melville, William Makepeace Thackeray, Ralph Waldo Emerson, and John Galsworthy. 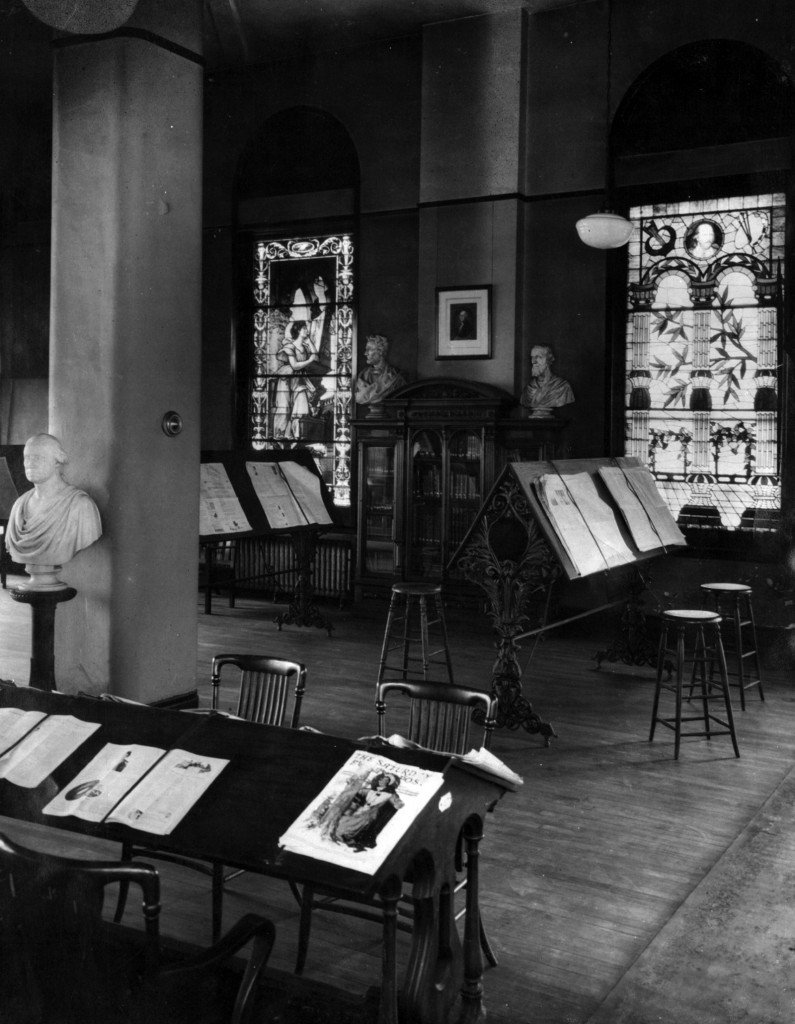 Despite the best efforts of the marble lady at the door, Cincinnati’s Mercantile Library is anything but quiet (although members are asked to take cell phone conversations to the lobby). Lively discussion groups and lectures cover every subject known to Dewey. The library lends out its holdings. Circulation records are still kept in card files, although computers are taking over the job, a sign that the past and future are converging at “The Merc.”

[blocktext align=”left”]The Merc has hosted lectures by Melville and Emerson; today it hosts hack-a-thons in addition to author talks.[/blocktext]The massive safe behind the circulation desk holds a 1672 edition of The True Prophecies and Prognostications of Michael Nostradamus, along with hand-written minutes from booze-fueled meetings where board members discussed everything from what constitutes “proper” literature to whether the elevator operator’s rudeness might be caused by termites in his wooden leg. Certain macabre legends persist: the librarian who died so suddenly at his desk that his glasses remained perched on his nose. There’s even a secret doorway. But in addition to its rich history, the Mercantile Library has grown into a sleek non-profit and “third space” for professionals, freelance writers, “creators,” and “makers,” who belly up to their laptops, pop in ear buds, and disappear into their work. This library has seen wars and recessions; now it hosts design charrettes and hack-a-thons. If the spirits of its pragmatic Midwestern founders still stalk the room, they like what they see.

Cedric Rose is the collector at the Mercantile Library.

For more on the history of Cincy, read our Cincinnati Anthology