A Pair of Dominion Pipelines in Appalachia Are Uniting a Coalition of Environmental Activists That Crosses Racial, Economic, and Geographic Lines

“While there are no Neo-Nazis in the streets of Charlottesville today, white supremacy is very much at work in the offices of Dominion Energy. Money rules, African Americans suffer. It is an old story of power and heartlessness.”

The man at the podium inside CitySpace in downtown Charlottesville, Virginia, was participating in The People’s Tribunal on Human Rights and Environmental Justice Impacts of Fracked Gas and Infrastructure, a late October precursor to the international anti-fracking tribunal to be held in Rome in May 2018, where the above testimony will be considered in an international censure of Dominion Energy and its political allies.

The electricity and gas giant stands accused of threatening the lives of those living in proximity to two natural gas pipelines it’s planning on building: The $3.5-billion, 303-mile Mountain Valley Pipeline (MVP) and the $5-billion, 600-mile Atlantic Coast Pipeline (ACP), both starting in West Virginia. The MVP will terminate in Virginia while the ACP will continue through the commonwealth, bending down into North Carolina. In the path of both are many of the region’s poorest rural communities, and a disproportionate number of those impacted by both immediate construction and ongoing environmental damage will be African American.

The man at the podium, who lives in the path of the proposed ACP, in Union Hill, Virginia, continued: “It is plantation politics. It is rooted in white supremacy plain and simple.”

The thing about pipeline injustice, though, is how inclusive it is. It’s not just African Americans who stand to suffer from the pipelines. Native peoples, poor white individuals, and business owners will be impacted, too.

For many participants at the People’s Tribunal, testifying against Dominion Energy was not just about expressing environmental concerns for the future, but also about exploring complex issues of race, dispossession, exploitation, and colonization in the past, which some activists see as a critical step in sustaining a strong environmental justice movement in Appalachia.

The reference to plantation politics is not rhetorical in this case. Much of the land Dominion acquired in Union Hill is the site of a former tobacco plantation in Buckingham County. Around 85 percent of individuals living within one mile of the proposed pipeline and its infrastructure will be African American, and many claim ancestry to those once enslaved at the Variety Shade plantation. Dominion purchased the land from Variety Shade Landowners of Virginia, an investment group founded by the descendants of slave owners, for $37,765 per acre, a price approximately ten times the land’s normal value. Dominion’s willingness to offer absent landowners astronomical sums for their acreage has frozen African American residents out of negotiations, relegating them to the role of troublemakers and nuisances to be ignored or dealt with through the courts.

The thing about pipeline injustice, though, is how inclusive it is. It’s not just African Americans who stand to suffer from the pipelines. Native peoples, poor white individuals, and business owners will be impacted, too. Alliances formed in opposition to the pipelines reflect a diverse mix of activists with generations-deep attachment to the land.

But there are newcomers, too, like Carolyn Reilly, whose family purchased a 50-acre farm in Virginia six years ago wanting a fresh start from corporate life. A landowner from Rocky Mount, Virginia, Reilly testified that, “We are just trying to live our lives as best we can, and work, and play, and be with our families and friends.” She said that Dominion had already had her family in court to obtain an injunction that would allow the power company access to her land and home to survey it against her wishes. “We are resisting as hard as we can,” she said. “A year ago Standing Rock was happening, and many of us watched what was going on … and being a white woman who is complaining about property rights and saying ‘this is wrong’ and ‘this is constitutionally a problem,’ I had to analyze and look at myself really hard … and look at the history of this country, and that I’m a part of colonization, and that the land my family owns is stolen land. And I want to honor the history of the land.”

What is unique about the People’s Tribunal is that it created space for the likes of Reilly to stand alongside Andrew Tyler, a representative of the Coalition of Woodland Nations whose ancestry is the Cherokee and Pamunkey peoples. “Five hundred years ago my ancestors watched as the first boat people, the first undocumented aliens, the settlers, the colonists, the invaders arrived on our lands in their wooden boats from a far-away place,” he testified at the Tribunal’s opening, setting the tone for the dialogue that followed. “They were armed with the doctrine of discovery. They looked upon our homes and they claimed eminent domain.” 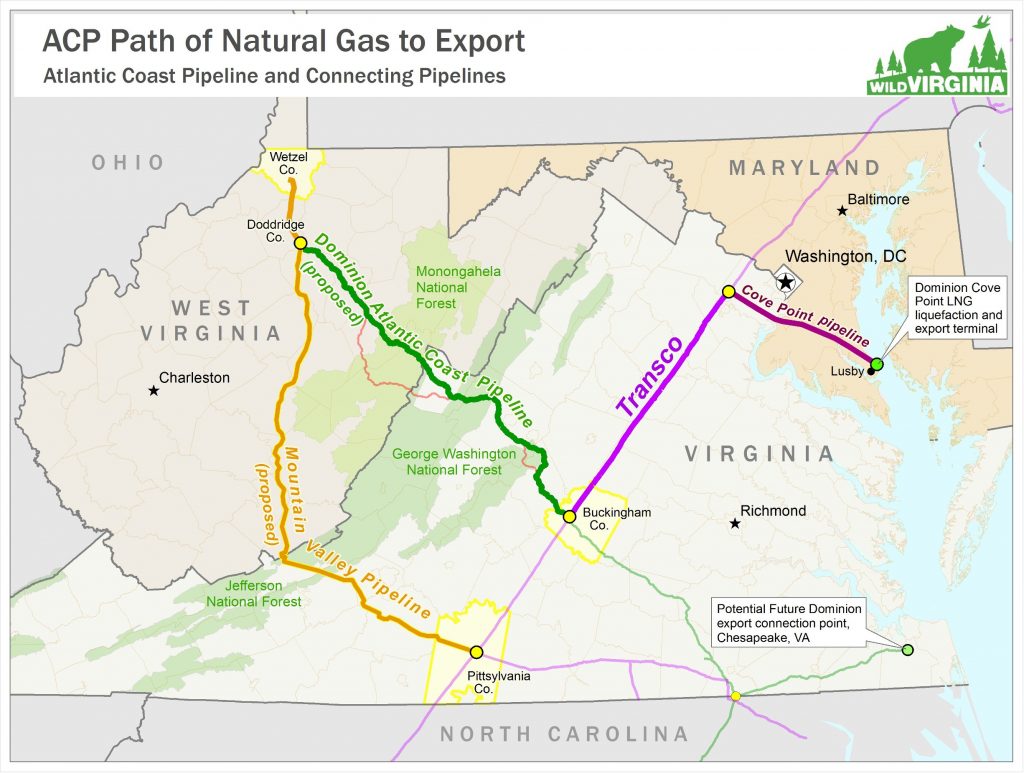 While the situation in Appalachia is dire — the Federal Energy Regulatory Commission gave both the MVP and ACP its approval in mid-October, giving developers the authority to threaten noncompliant landowners with eminent domain — the activism on display at the People’s Tribunal offered hope in its collectivism. In Charlottesville, disparate communities came together across racial, geographic, and economic lines, not just through a shared fear for the future but also a profound sense of the past.

This presence of the past looks at legal mechanisms like eminent domain and sees its antecedents in the colonization and forced migration of indigenous peoples; this past is cut through the bones of enslaved and freed men and women buried beneath the former tobacco lands on which they toiled without mercy; and it’s a past dug out from the darkest part of Appalachia’s mines, used to fuel the toxic self-fulfillment of corporate capital and political power; and it is part of a story that is hundreds of years old yet modern enough to be captured on video as the unfolding horror at Standing Rock.

For many at the Tribunal and those who supported them remotely, the proposed pipelines, in their ability to physically unite an otherwise segregated region, might serve as the foundation for a powerful movement. Craig Stevens, a landowner in Susquehanna County, Pennsylvania, with a bottle of his own contaminated water in his hand and long battles against energy companies under his belt promised the assembled crowd, “When we unite, we cannot be beaten. When we’re all connected together, we can win.”

Elizabeth Catte is a writer and historian from East Tennessee and is the author of the forthcoming What You Are Getting Wrong About Appalachia (Belt, February 2018). She holds a PhD in public history and is the co-owner of Passel, a historical consulting and community development firm.
FacebookTwitterLinkedInRedditEmail