This story was first published by Planet Detroit


A generation of birthing people never knew a world without reproductive freedom until recently, when the U.S. Supreme Court reversed a near half-century precedent that guaranteed the right to safe and legal abortion. Across the country, the aftershock of Roe v. Wade’s fall has inspired collective anger, despair, and disbelief, which spilled onto social media and into the streets. But also resistance.

Under a blazing summer sun, hundreds of protestors have been flooding downtown Detroit ever since the high court’s ruling. A legion of women has brandished signs demanding their right to choose. Chants of “my body, my choice,” sounded like primal screams.

As a Black woman and a birthing person, the ruling hit demonstrator Rai Lanier on many levels.  The executive director of Michigan Liberation, an organization working to end mass incarceration, urged a crowd of protestors to mobilize. “We need you. We need organized power now,” she said. “You need to fight to our last breath.”

Protester Katie Campbell thought about her daughters, who will one day grow up with less than she did. “They shouldn’t have to worry about pregnancy, God forbid, worrying about wanting to get pregnant and not being able to terminate it to risk their lives,” she said. “I cannot believe we have to fight for something we got fifty years ago.”

Many advocates viewed the ruling as an assault on health and bodily autonomy — both core principles of reproductive justice and environmental justice. Reproductive justice fights to ensure a person’s right to have or not have a child, that a child is born into safe and healthy environments and that birthing people have equitable access to family planning options like abortion and contraception. Environmental justice ensures all people are treated fairly and equally protected from environmental hazards through laws and regulations. 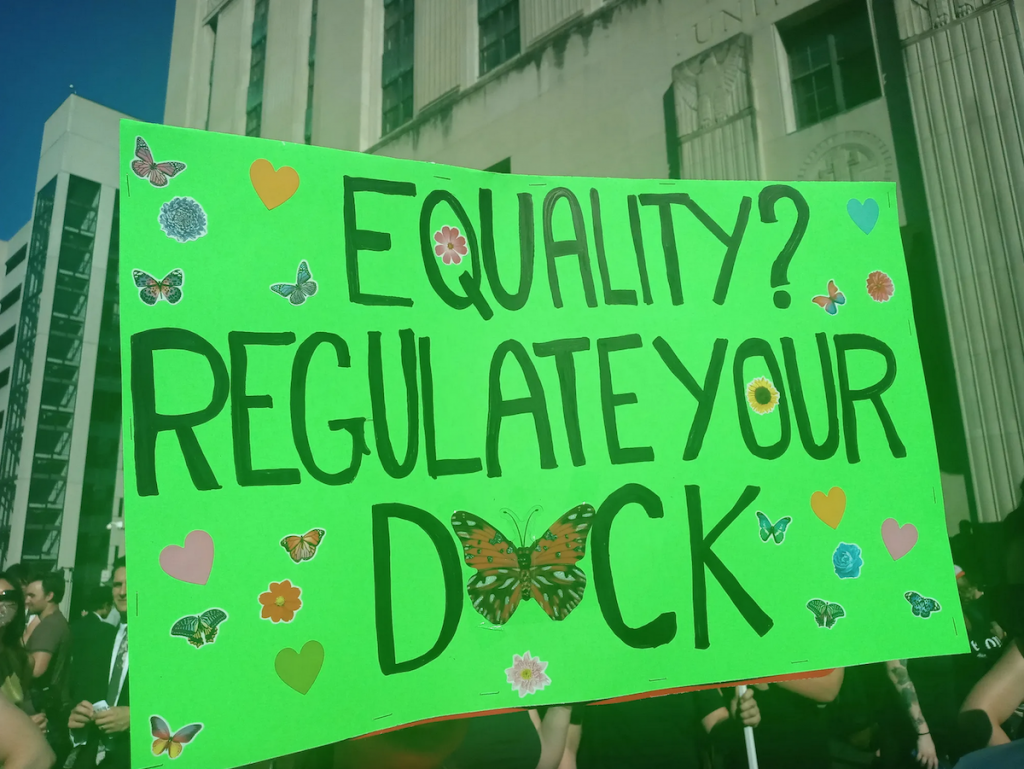 Abortion rights advocates have launched a ballot initiative, MI Reproductive Freedom For All, which aims to enshrine access to reproductive healthcare services, including abortion and contraception, into the Michigan constitution. Photo by Eleanore Catolico/Planet Detroit.

Dually advancing reproductive justice and environmental justice can also mean pushing to eliminate a birthing person’s exposure to harmful pollution and heat exposure, both of which can negatively influence pregnancy outcomes. “Reproductive justice and environmental justice are both really about our ability to make decisions about our health and our bodies,” said Bridget Vial, an energy democracy organizer with the Michigan Environmental Justice Coalition. “In the case of environmental justice, we’re concerned about what the government is permitting polluters to pollute in our neighborhoods, and how that impacts chronic disease and risk of cancer and risk of miscarriage.”

The undoing of this constitutional right, advocates say, builds upon a nexus of systemic oppression. It will further endanger the most vulnerable, including Black and brown birthing people living in poverty or with disability. The consequences of the ruling also raise questions about bringing life into a world increasingly threatened by the climate crisis and rife with persistent housing, education, economic and healthcare inequities—which obstruct a family’s ability to provide and help the child truly thrive.

Vial said she sees these inequities as a direct result of social policy failing to address the needs of communities of color, especially predominantly Black communities, Indigenous communities, and those who don’t have a lot of wealth or income, including rural white communities.

Aurora Harris is a co-founder of We the People of Detroit, an advocacy organization that aims to inform, educate and mobilize residents around key issues such as education and water. She echoed Vial’s concerns. “I think the decision to overturn Roe V. Wade will impact low-income women who [are] already or more likely to be in poverty and fighting against financial distress with little, limited, or no healthcare,” she said. “In Detroit, many are struggling to pay rent or high property taxes, water bills and other utilities, car insurance, and rising food and gas costs.”

“Women may have to give up their jobs or quit school…to provide childcare when they don’t have assistance or can’t afford the costs of daycare…women are struggling to work in low-income jobs to provide basic necessities and care for their families.”

In Detroit, the Blackest city in America, about thirty-four percent of women live below the poverty line, recent census data revealed.  Residents pay some of the highest electricity rates in the country.  Across the metro area, families with low-income backgrounds use about ten percent of their monthly earnings toward energy bills, one analysis found. Anything above six percent constitutes a substantial financial burden. Such bills remain unaffordable for a large swath of Black and Latinx families living in the area.

Exposure to air pollution can also increase the risk of miscarriage, premature birth, and low birth weight. Research shows race is the strongest predictor of where toxic facilities operate, and predominantly Black and brown communities often bear the brunt of living with environmental hazards.

Particle pollution, or a mixture of solid or liquid droplets suspended in the air, emanates from construction sites, unpaved roads, industrial zones, cars and other sources. Breathing in these fine particles can irritate the eyes, nose, and throat and exacerbate chronic illnesses like asthma and heart disease. Detroit’s short-term particle pollution exposure has gotten worse over the last few years, one recent report found. And extreme heat exposure can lead to miscarriage, preterm birth and stillbirth.

If abortion is criminalized in Michigan, people may have to travel hundreds of miles to access reproductive healthcare services. But lack of access to reliable transportation creates a challenge. “We live in a built urban environment that is based on an assumption that everyone has a car. And there’s about a third of people in Detroit who don’t have access to a car,” Vial said. “So that’s really concerning.”

For much of Dessa Cosma’s life, she’s had to battle what others thought her body should and shouldn’t do as a disabled woman. Millions of women like Cosma, the executive director of the group Detroit Disability Power, live with disabilities and are at greater risk from climate change’s effects but are often ignored in climate resilience agendas. They face a grim reality in the wake of Roe’s dismantling, Cosma warned. “We’re more likely to be sexually assaulted and sexually abused. We’re more likely to be sexually assaulted than our non-disabled peers,” she said.

“Lack of abortion access is extra hard for disabled women because we have a higher likelihood of being economically and logistically tethered and dependent on other people who end up having a lot of control over our lives.” 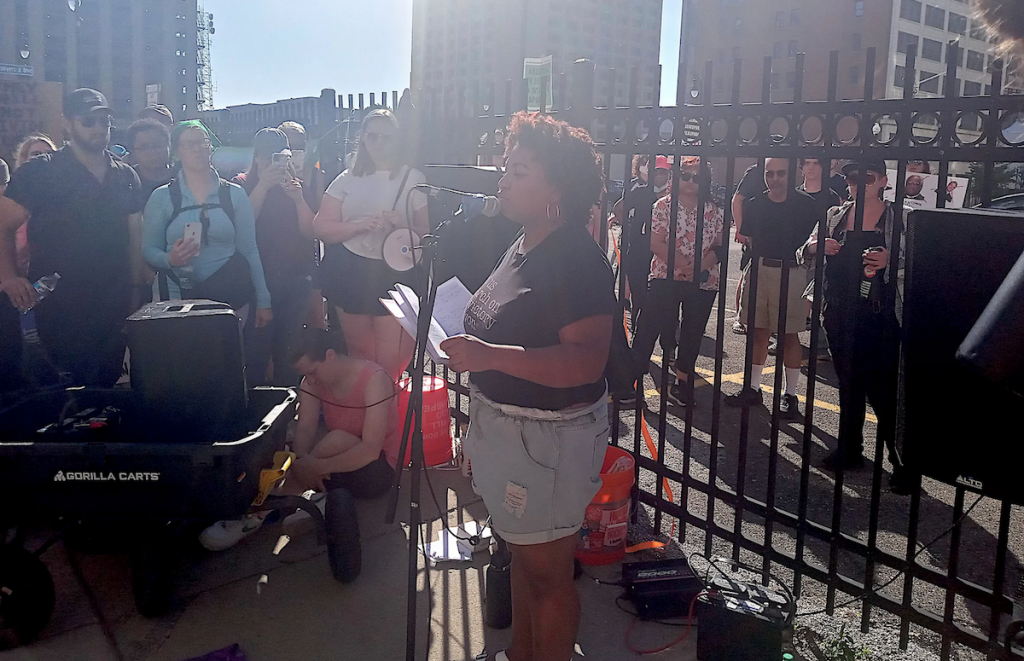 People living with disability, especially people of color or LGBTQ people, are already more likely to face bias, discrimination and significant barriers when trying to access healthcare. “Bodily autonomy, the right to choose what happens to our bodies and by whom, is a core principle, a core value to our survival,” she said.

Michigan remains a safe haven for abortion services for the moment, but that fate is in limbo. A preliminary injunction is blocking a 1931 trigger law from going into effect, which would criminalize virtually all abortions with no exceptions for rape or incest.  The Michigan Court of Appeals could overturn the injunction at any time, and some county prosecutors are already saying they will ignore the injunction and prosecute abortion providers. Gov. Gretchen Whitmer has also filed a lawsuit with the Michigan Supreme Court and urged them to recognize a constitutional right to abortion under the state constitution’s due process clause.

So reproductive rights advocates are racing against the clock. A ballot initiative called Reproductive Freedom for All is actively collecting signatures in hopes of enshrining reproductive freedom, which would allow people to make decisions about abortion, birth control, and prenatal care without political interference in the state’s constitution. Organizers must collect at least 425,059 signatures in order for the measure to appear on the November ballot. The initiative, according to organizers, has already garnered enough signatures but is still accepting more in the event some are challenged.

But chaos still looms. Even if the measure is successful, advocates say the Supreme Court’s ruling is a harbinger of the dismantling of other civil rights protections. “This decision is historic, not only because it’s a ban on abortion, which is enough of a loss within itself. But because this decision…is the benchmark of the beginning of the repeal or pulling back of every single progressive gain or win in the civil rights movement,” said Nakia Wallace, the co-founder of Detroit Will Breathe, a youth-led organization fighting police brutality and systemic racism in the city.

“The only way we defend not only our right to abortion and healthcare but our right to gay marriage, everything, is the same way we won it. In the streets.” ■