I stayed in Toledo an extra day to attend a Black Lives Matter rally but I wasn’t sure I was going to make it. I thought I might be spending the night in the hospital. I could barely see, my hands shook, and I was nauseated, all symptoms of dehydration and heat exhaustion. The heat index had been in the upper 90’s, with little cloud cover. I hadn’t had much to eat. I had major sunburn on my legs, my arms, and my neck.

I’d spent the previous night guerrilla camping in the wilderness and had woken up with at least one tick inside my bivy sack. I’d gotten about four hours of sleep after walking about 40 miles.

As my head swam in a delirious fog and I tried to force a protein bar and a sports drink inside myself against the will of my vomitous stomach, I worried it might not just be dehydration, or low blood sugar, but some tick-borne illness.

But I was safe. After I hitchhiked to Toledo, a complete stranger had opened her home to me, allowing me to nurse myself back to health. If I’d attempted to cowboy on and stayed another night in the bush, I could very well be in the hospital, or worse. 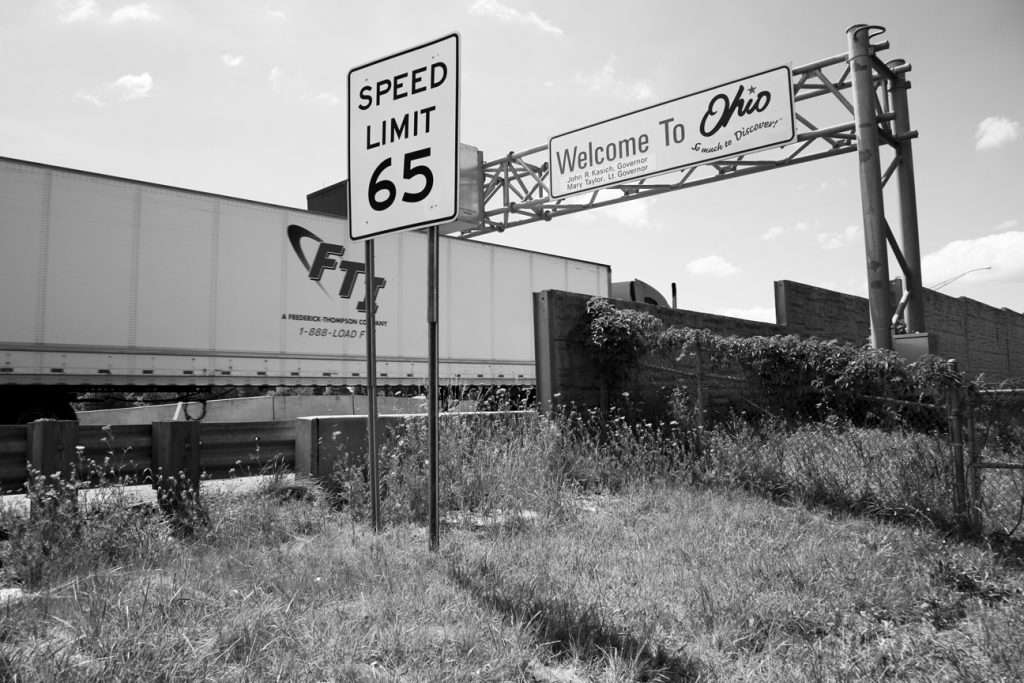 I’m noticing some patterns out here on the road, some common themes that have come up again on all sides of the political spectrum, from reluctant Trump supporters to those reluctantly supporting Hillary. I’ve spoken to dozens of people and haven’t spoken to anyone who loves, or even really believes wholeheartedly, in either candidate.

One of the most unexpected trend is the number of people who once voted for Obama who are now planning to vote for Trump. One man I met, a traveling oil refinery worker who has voted a straight Democratic ticket his “whole life” will vote for Trump in November.

The Trump voters I’ve spoken to unanimously like his “independence,” and his perceived separation from the current political class. Over and over again I they hammer home the same point: “we need to bring blue collar jobs back to the U.S.” Everything– immigration, welfare, foreign policy — revolves around and comes back to jobs. In the (de)industrial Midwest this comes as no surprise. One man remarked, forlornly, “I’d like to get a job building that wall.”

When I’ve pushed that Trump has said some nasty things about groups of people, everyone has agreed and some have been ashamed. One voter said he was “embarrassed.” But voters are taking this as a sign of his independence rather than deeply held conviction, innocents in the crossfire when the sheriff has arrived to town.

Nearly everyone I’ve spoken to has agreed that the “system” is broken, and is looking for some kind of fundamental change, from anywhere, a change they once hoped for in Obama and never seemed to materialize. Almost everyone I’ve spoken to believes that politicians are little more than walking sacks of money, and not one agrees completely with any one party. We are far more complicated than our politics.

Over and over again I’ve heard, “I don’t know much about this, but…” and “I don’t have have time to study politics.” This has been underscored by the use of cliches like “political correctness” and “shoving it down our throats.” When pushed, folks are hard-pressed to give specifics.

Strangely, this gives me hope. 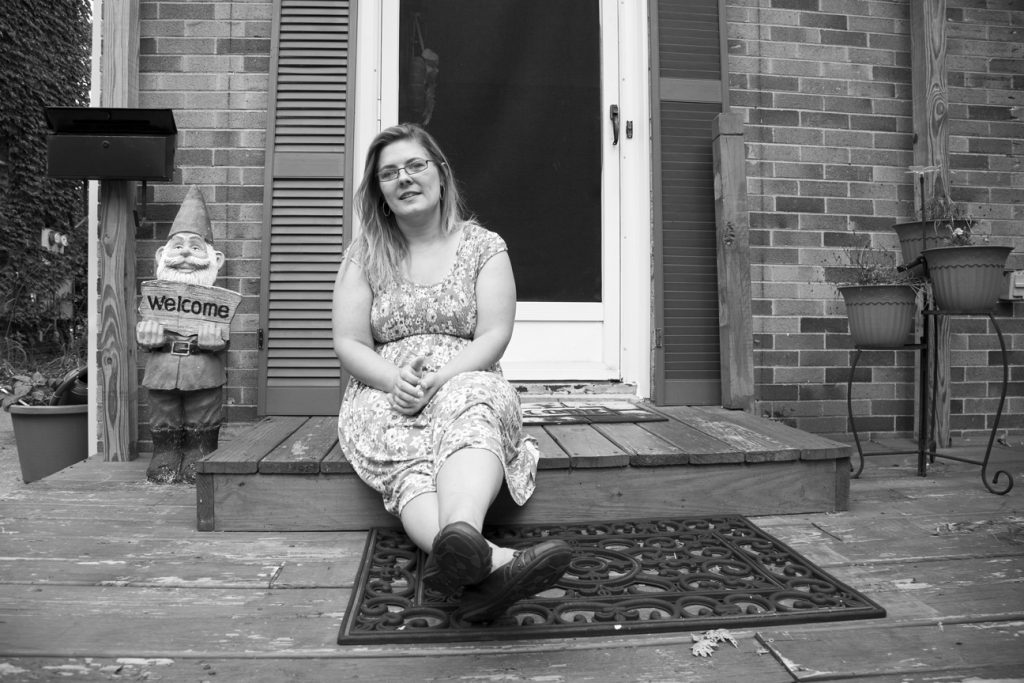 Michelle Keller, outside her home in Toledo, Ohio.

After the night of the ticks I put out a call on Facebook and Twitter for a place to stay that evening. Within 10 minutes someone I’d never met or spoken to had offered to speak to a friend in Toledo for me. Within another ten minutes that friend, Michelle Keller, had messaged me and invited me into her home.

It was her porch on which I sat debating whether or not to go to the hospital. When I said my blood sugar was low she ran to the store to get a sports drink. When I said all I’d had to eat that day was breakfast and a Slurpee she gave me cherries and made a casserole. When I said I was tired she offered me a bed in a spare bedroom.

She took a risk to help someone, and now she had a sick man in her house. When I woke up the next morning I felt like I had been hit by a truck, and she offered to let me stay another day. I said yes.

I asked her why she had agreed to allow me into her home. “There’s too much quick judgement and it leads to such injustice. If people would just sit down and actually listen, there would be more understanding,” she said. “Put away all your judgement and just find that stranger, be kind to them and just, you don’t know what you could learn from that person.”

That night, at the Black Lives Matter rally, I saw people of all races on the corner of Detroit and Monroe, just west of the Toledo art museum. Black mothers with their children softly teaching their young ones the words to chants, black men with bullhorns and bow ties, Muslim women in hijabs, queer allies, white men and women, some with their children. It was a healthy sized gathering for a city of just under 300,000 people.

“No justice, no peace! No racist police!”

“The people united, will never be defeated!”

Lots of these people were hurting too, but not in the way I was, and not in a way I would ever experience directly.

“This is my son. You are a white man,” Rodericka Quinn said, gesturing towards her boy standing with us on the median. “If the police come and he was in a conflict and you were in a conflict, they can deescalate your conflict with no violence. I’m scared that they’re going to shoot and kill my son.” 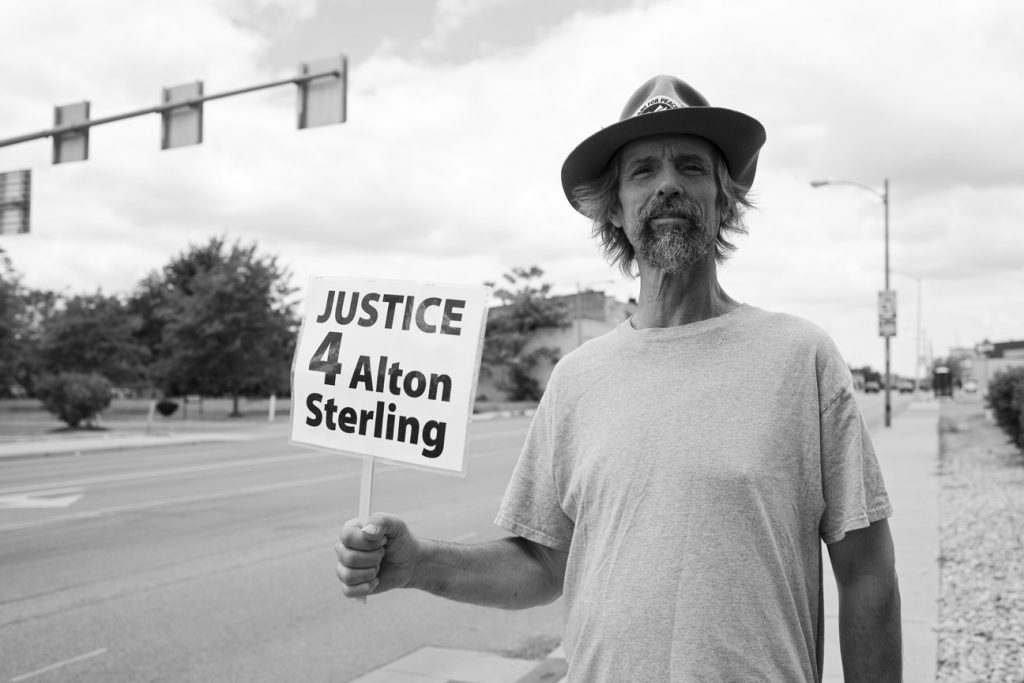 One of the men I met the other day at the truck stop in Monroe, who believed Muslims should be put into internment camps, also told me that Dearborn, MI, was under Sharia law.

I assured him I had just been there, and I’d lived near there almost my whole life, and there was categorically no Sharia law in Dearborn. He said, “Well then, it must be the media lying to us again.”

On the road so far I’ve seen a lot of fear and misinformation like this. But I’ve also seen a lot of bravery and hope. And what I’ve seen most of all, is that people are hurting, in all different kind of ways.

If we want things to change, we have to be willing to put ourselves on the line and up front and yes, even sometimes in danger. In some ways I put myself in danger on this trip, maybe foolishly. But I’m hopeful.

Every single person I’ve spoken to, when asked directly, both Trump supporters, Clinton voters, and those that don’t vote at all have said, “The police treat black people and white people differently.”

The root of hatred may be ignorance, but in Toledo there’s no ignorance about this simple fact.


Next:
Walking to Cleveland: Part Four of Four