You Must Be This Tall To Ride In Detroit

You live in New York and you’ve seen a billboard encouraging you to move to Detroit. Or you don’t live in New York but you’ve seen a snarky New York-based blog’s hot take on a billboard encouraging New Yorkers to move to Detroit. As a Detroiter, I can say that yes, Detroit is welcome to anyone. Just leave your kids in Brooklyn, please.

Yes, Detroit will take your tired, your poor, and all the huddled masses yearning to breathe free, but not any of those crumb-snatching blobs of cellular matter you refer to as “children” that you illogically procreated. Oh, no, certainly not in the New Detroit. You see, in order for us to move forward as a city, we simply cannot have children as part of the restorative populace. 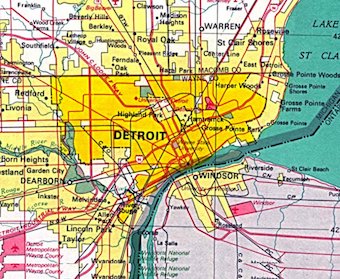 To all the fashionable gay couples with adorable offspring in tiny Ralph Lauren sweaters, you may have to prove to a court that you are worthy of parenting, so you’d be exempt from this anyway. As for the rest of you would-be Detroiters, listen up.

A new restaurant opens every week in what was once the nation’s fattest city. It is required that beef tartare and some type of cooked cephalopod appear on each menu, and while both front- and back-of-house staffers are a diverse mix of blacks and whites and perhaps an occasional Latino, at least one bartender must have a tattoo sleeve. There are no kids’ menus.

Knowing that restaurants are the future, the city administration will allow developers to remake a historic recreation center into a restaurant. There will be housing, even low-income housing for you starving artists. But there will also be another restaurant, just two blocks away from a housing project where a woman’s ex-boyfriend shot her 8-year-old son while he slept.

Sure, an optimistic parent could wait for pie pushers and barbecue barons to save Detroit by ever-so-slowly rebuilding the tax base – one small plate at a time! – so that public schools could be properly funded. Maybe the infant mortality rate will drop by that time, too. But in the meantime, Detroit really is a DINK paradise.

It’s all laid out here for the aspiring Detroiter en route from New York. We already have your yoga studios and dog parks, but we’re just not sure what to do with your children. Public transportation is such that you wouldn’t want your kids riding alone on them. But hell, most adults don’t want to ride the buses here anyway. Go get yourself a bicycle from Shinola, then. (They don’t have kids’ bikes, for the record.) 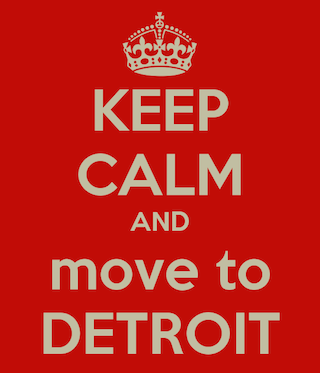 Whoops, did you get pregnant? And you don’t want to give up that Mies van der Rohe condo or Merchants’ Row loft you had to bid out a zillion other Quicken employees for? You could embark on the decathlon-like challenge of enrolling your child in one of the few remaining schools – many of which are in midtown or downtown, but can you afford our rising rents and the annual costs of raising a child? Can you handle going to open houses announced online in a barely connected city, calling around to schools months ahead of time to ensure enrollment, or maybe being placed in a lottery system where you’ll compete with desperate parents from all across the city trying to avoid a neighborhood school controlled by one of two underfunded state-run districts?

Are you still absolutely insistent on bringing your children to a city where there are more vacant than functioning schools? You may have to live in a suburb. Looking for diversity with that Bushwick edge? Try Hamtramck. Looking for diversity and don’t want your car broken into? Try Berkley. Or if you want the prestige of a Manhattan private school, go to Bloomfield Hills – as long as you’re not black.

Here in Detroit, you can be as self-centered as you want, freezing yourself in the brand of early-twenties adolescence civic leaders so desperately need to market this place. And you can’t have a kid around if you just want to be a big kid yourself.

Aaron Foley writes the On Detroit column for Belt as well as authoring How To Live In Detroit Without Being A Jackass, to be published by Belt in fall 2015.