When You’re Embarrassed To Be A Michigander

Supposedly, “Michigander” is an offensive term, first coined by Abraham Lincoln as an insult. Lincoln thought Lewis Cass, the great Michigan governor for which so much of our institutions and municipalities are named, was a silly goose because of Cass’ (now-outdated) views on certain states’ rights to legalize slavery.

How right Lincoln might have been. We are silly, foolish geese, aimlessly strutting around, no hope of ever finding any common sense. Who would want to be a Michigander?

You may have noticed that the Mitten State is grappling with multiple crises. There’s Flint, of course, upon whose water the world’s eyes are trained. Next, there’s Detroit Public Schools, which could become the first school district in the country to declare bankruptcy. And those are just the things people outside the state know about. 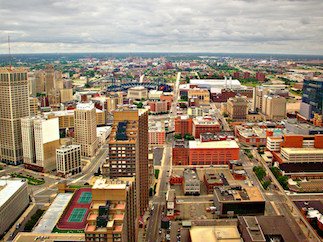 Young people are still leaving the state as fast as they can (and honestly, who could blame them?); the pretty towns seen in Pure Michigan ads are suffering extreme poverty; Highland Park is almost always on fire, and… are we still dealing with that Asian carp thing? I don’t know, but there’s probably something wrong with our lakes right now.

Who’d want to be a Michigander? Who’d be foolish enough to live here?

I’m compelled to say something nice about Detroit Public Schools, having attended them and being surrounded by products of that system which has incubated so many leaders around the city of Detroit, both established and up-and-coming. It stings when I see the comments from onlookers, shaking their heads at the disastrous conditions of school buildings and what teachers and students have to deal with each day, because I know what DPS is capable of.

And it’s not the fault of DPS.

Flint, once (still?) the place even us Detroiters were afraid to visit. Oh, gosh, Flint. I remember years ago on my high school track team, we were headed to an invitational race in Corunna. “Where’s Corunna?” we asked. (“Like Corona, the beer?” someone else asked.) “It’s outside Flint,” our coach said. The collective “Oh, my God!” and “I don’t want to get shot!” comments from our 15- and 16-year-old psyches, not knowing that Corunna was actually 30 miles outside Flint. Still, it had a reputation, even though we were supposed to be the big, bad Detroiters. Now, Flint and Detroit stand in solidarity.

And it’s not Flint’s fault, either.

Almost everything that’s going on in our dirty state right now can be traced to our current leadership. (A leadership who, by the way, has the worst PR tactics conceivable in a time of crisis. There’s absolutely no way news of a Chanel birthday cake should have leaked. Or maybe a smarter thing to do was to not have ordered one at all.) Sometimes you almost feel bad for the guy. Most of the time, you don’t.

I wonder if Rick Snyder knows how many of us Michiganders are embarrassed to be Michiganders right now, maybe forever? We always had our saving graces, no matter how much things sucked. Flint had its reputation, just like Detroit has its own, but you’d be hard-pressed to find a citizen who loves their city more than a Flintstone. Do they feel that way now?

We always had our excuses to live in Michigan. The winters are brutal, but we don’t have hurricanes, tornadoes or earthquakes! Crumbling inner cities, but look at our coastlines! Or everyone’s favorite: At least we’re not Ohio!

[blocktext align=”right”]Who’d want to be a Michigander? Who’d be foolish enough to live here?[/blocktext]But what do you do when you feel ashamed to live here? Do I, as a trendy young millennial, join the expats in Chicago? Do I turn a blind eye and focus on relentless positive action, just like our politicians? Do I live in the warped, alternate universe that is a Pure Michigan ad? I mean, I wrote a whole book – ahem – trying to sell people on the good parts of Detroit. How do you square that with living in this state as a whole?

But honestly, the more important questions: Do I actually have the will to tough it out in Michigan, where so many of us are broken beyond repair? Would I, if faced with the decision, uproot from the state I love so much? Would I be a sellout or a turncoat if I did? Would I be foolish to stay?

These are questions I don’t yet have the answers to, but I know I’m not alone in wondering. I’m frustrated to be in this conundrum, and I can’t stand this uncertainty placed upon us. Until we find those answers – that is, if we ever find them – people will keep pointing and shaking their heads.

___
Aaron Foley writes the On Detroit column for Belt as well as authoring How To Live In Detroit Without Being A Jackass, published by Belt.